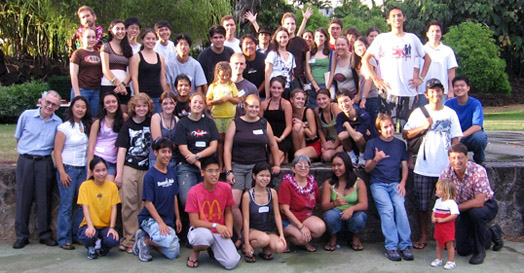 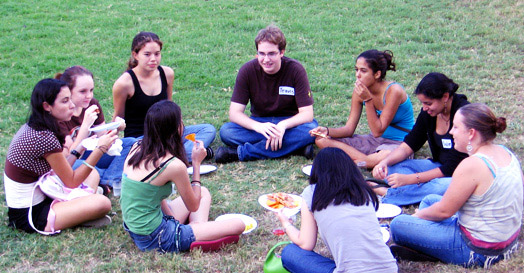 Students enjoy each other’s company during lunch at an honors picnic in 2008. 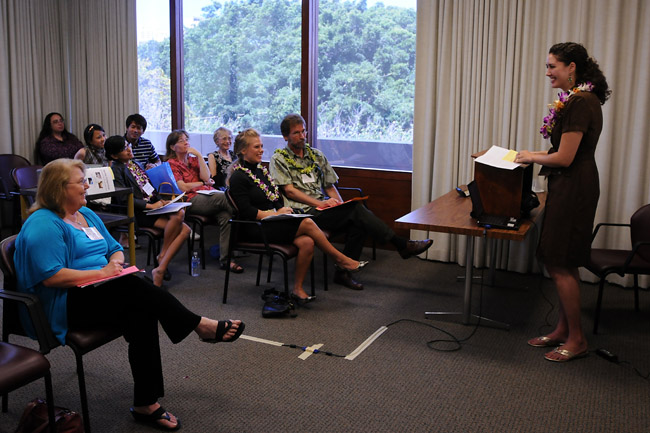 Courtney Kealalawai Silva, who graduated with honors in English last semester, spoke at the 2009 Symposium of Undergraduate Research, which is sponsored by the Honors Program and the University Research Council each spring.

Students enjoy each other’s company during lunch at an honors picnic in 2008.

Courtney Kealalawai Silva, who graduated with honors in English last semester, spoke at the 2009 Symposium of Undergraduate Research, which is sponsored by the Honors Program and the University Research Council each spring.

The Honors Program at the University of Hawai‘i at MÄnoa seeks to challenge students academically, but lately the program is going through challenges of its own.

Honors Program adviser Paige Wilmeth will leave the program in late March because of personal reasons. There are currently no plans to replace her.

"Paige has always been a very helpful adviser for me," said junior Elyse Oyama.

Oyama has been in the Honors Program since her freshman year and has worked closely with Wilmeth to find scholarships to fund her study-abroad trip to Spain last spring.

Wilmeth got involved in the Honors Program in 1990 as an undergraduate honors student and started working for the program in 2004 as an academic adviser for the Colleges of Arts and Sciences. While there, she created and implemented the Honors 101 Peer Mentor program and the peer mentor program for honors students in the residential communities on campus.

Wilmeth has not yet given a formal resignation.

In addition to the departure of the Honors adviser, director John Goss is considering other options both in and out of the university. All 420 students in the Honors Program receive personal advising from both Goss and Wilmeth.

"To have the major adviser not there means that the director has to eventually personally advise all 420 students," said public relations manager Jeffery Guillermo, "which is a pretty daunting task for one man."

Goss has been the Honors Program director since August 2006. His job is to control the administration of the programs. This includes student recruitment, advising, curriculum, assessment of degrees, planning and policy development, and alumni relations.

"If he were to leave, the Honors Program will be eventually run by the new adviser, whoever that may be," Guillermo said.

However, he added that finding a replacement for Goss is not of high concern "because there are other faculty members that can step up to that."

The Honors Program at MÄnoa started in 1958 and consists of two divisions. The lower division is exclusive to first-year and sophomore students and provides them with small student-centered classes. The upper division curriculum is open to juniors and seniors and prepares them for their senior Honors project thesis.

Oyama, an economics and psychology major, is in the upper-division Honors Program and is working on her research project.

"The Honors Program has made a big impact in my college career," Oyama said. "Not only was it how I met many of my first friends at MÄnoa, but it is still how I am continually meeting new people who share a similar ambition for scholarship and research."

The Honors Program is also dealing with the absence of its 42-year secretary Leimomi Kawakami, who retired in November 2008. Her position was frozen immediately and later eliminated by administration the following academic year.

Another challenge for the program is a shortage of funds.

The lack of funds has prevented the program from hosting the Alumni Reunion, a celebration of the 50th anniversary of the Honors Program. According to Guillermo, it is crucial to start an alumni network that spans generations.

Additionally, the program is short-staffed.

Our biggest issue is that (the students) are not being served as well as they should be," Guillermo said. "I see six or seven students sitting there and there are only two people to help them, so that's an indication."