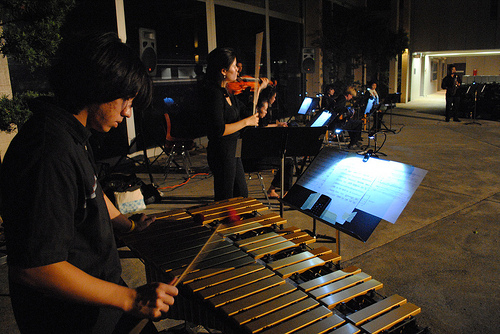 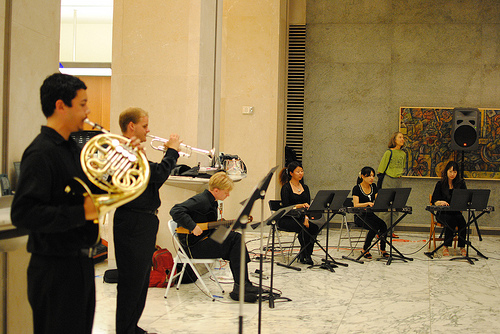 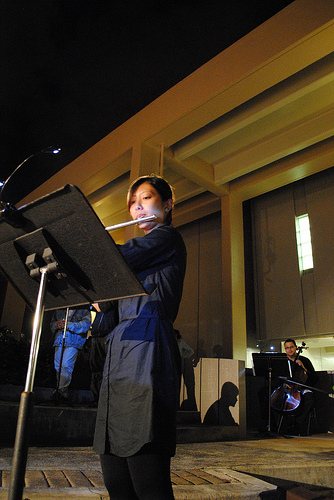 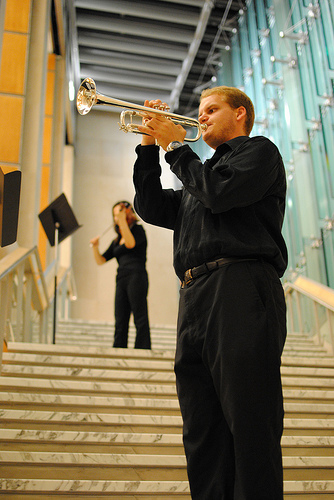 This set was taken April 2, 2010, at a performance of the same piece at The Contemporary Museum at First Hawaiian Center as part of its “First Friday” festivities. 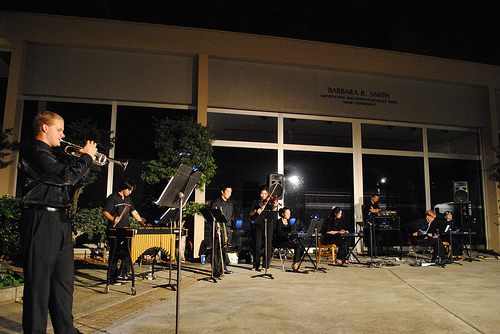 The outdoor set is from a November performance of a piece by Terry Riley called “In C,” performed in the gamelan courtyard at the music department.

This set was taken April 2, 2010, at a performance of the same piece at The Contemporary Museum at First Hawaiian Center as part of its “First Friday” festivities.

The outdoor set is from a November performance of a piece by Terry Riley called “In C,” performed in the gamelan courtyard at the music department.

Minimalist music often repeats patterns and has small changes that occur over a long period of time. It's based on the idea of using a very minimal amount to produce a maximum effect.

"If a single note changes in a pattern, it's a big event, that's different than most music. It's because he (Steve Reich) repeats everything so much," said Thomas Osborne of the University of Hawai‘i at MÄnoa's music program.

The idea may sound simple, but the music is artistic and intricate.

The steady pulse of the music requires playing constantly for a long period of time, so players must have a lot of stamina. According to Osborne, the university's Contemporary Music Ensemble (CME), which plays minimalist pieces, has been taking on more difficult pieces, some of which it has been practicing since January.

The CME will perform its final concert of the semester this Saturday from 7:30 to 9 p.m. The ensemble, made up of 20 music majors, is directed by Osborne.

For this weekend's show, the CME will play alongside UH alumni, faculty and other music professionals from the community.

The concert and benefit will both feature minimalist pieces all composed by Steve Reich, one of the most famous American composers of the 20th century. Born in 1936, Reich began composing music in the early 1960s and continues to do so.

"He's a rare composer who can interest not only musicians and musical audiences, but also people who normally don't go to classical music concerts," Osborne said.

Another piece, "Different Trains," one of Reich's darker works written in 1988, is scored for a live string quartet, plus prerecorded train sounds and voices. In this piece, he uses the contour of voices and actual words and turns them into a melody by matching instruments to them.

The show will conclude with "Eight Lines," a piece that includes six guest players joining the student performers to make a larger ensemble.

"It's been very difficult to put this together, but I think the pay off is going to be fantastic," Osbourne said.

Preceding the concert will be a first-ever benefit reception in the Music Department courtyard outside Orvis Auditorium. The benefit will include a talk about the pieces that are in the concert, a special performance called "Six Pianos," and refreshments.

Proceeds from the benefit will go to the CME; it currently has no budget, and to buy or rent music is expensive, Osborne said.

For more information go to www.hawaii.edu/uhmusic and click "Events."