You have permission to edit this article.
Edit
Home
CAMPUS
NON-CAMPUS
GOVERNMENT
SCIENCE & SUSTAINABILITY
1 of 7 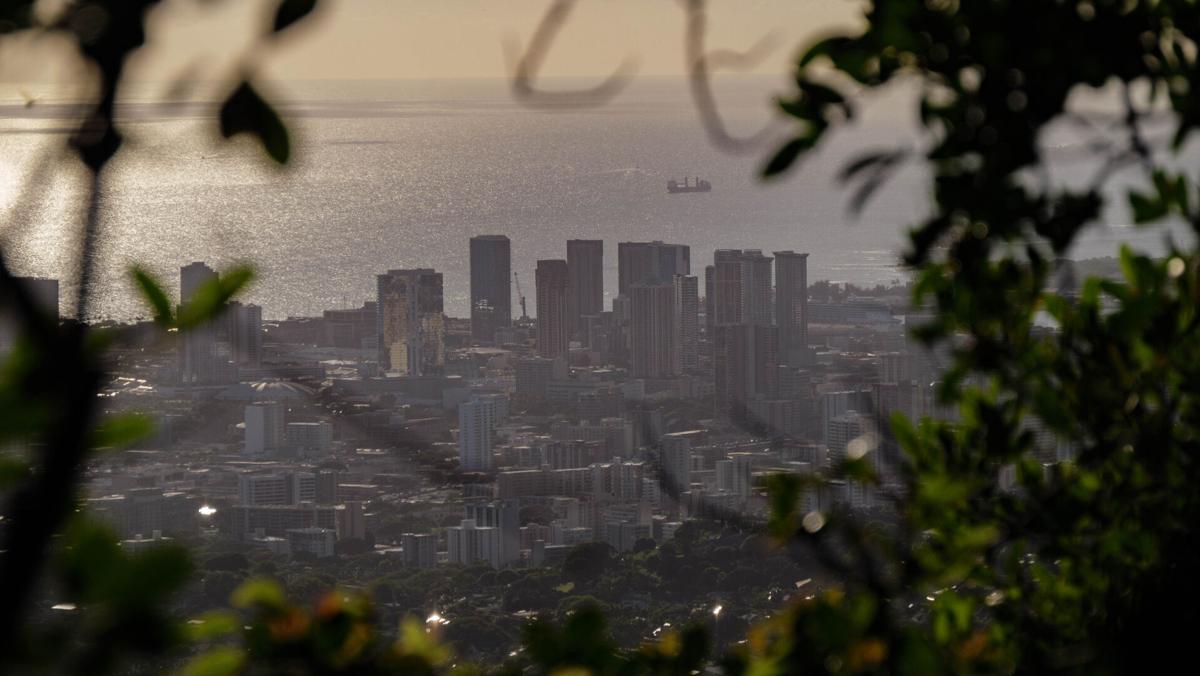 Honolulu skyline shot through the forest above at Wa'ahila Ridge State Recreation Area. Displays the ever encroaching cityscape amongst nature 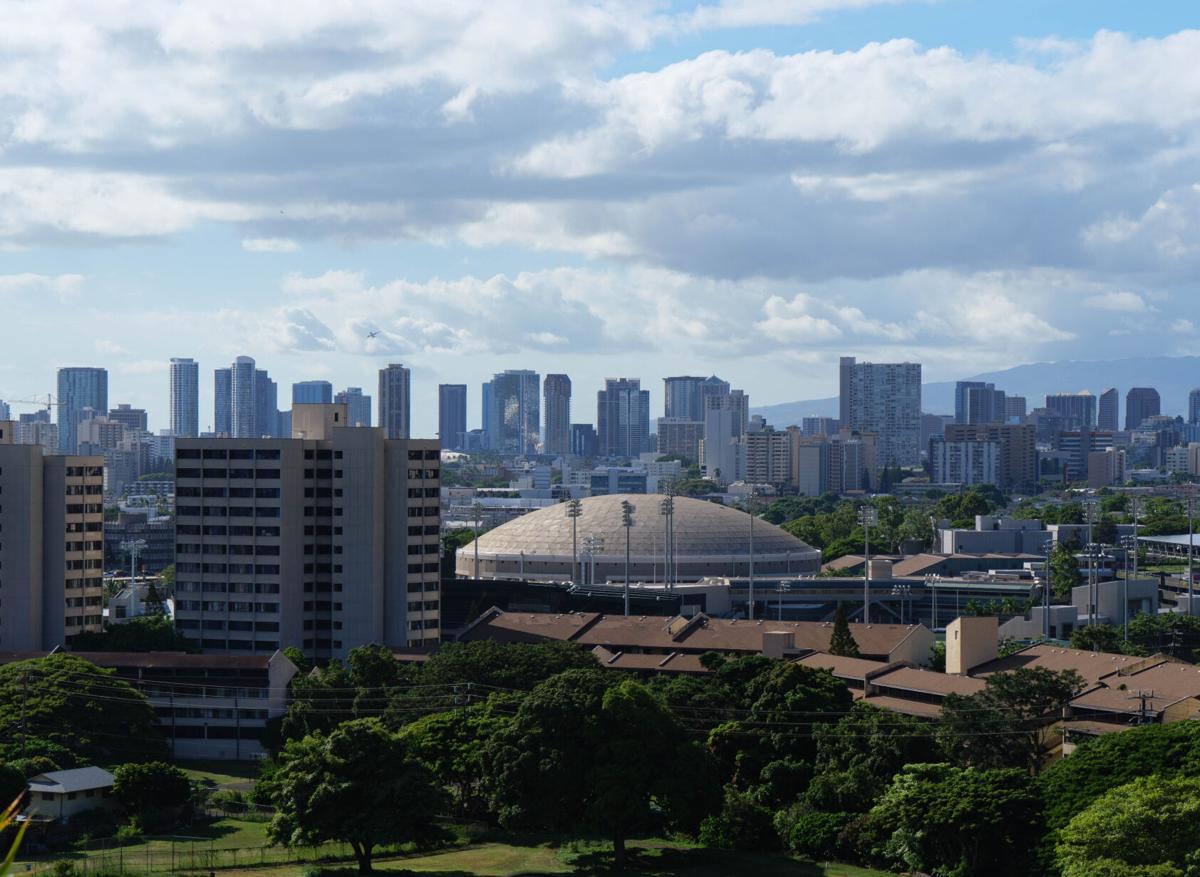 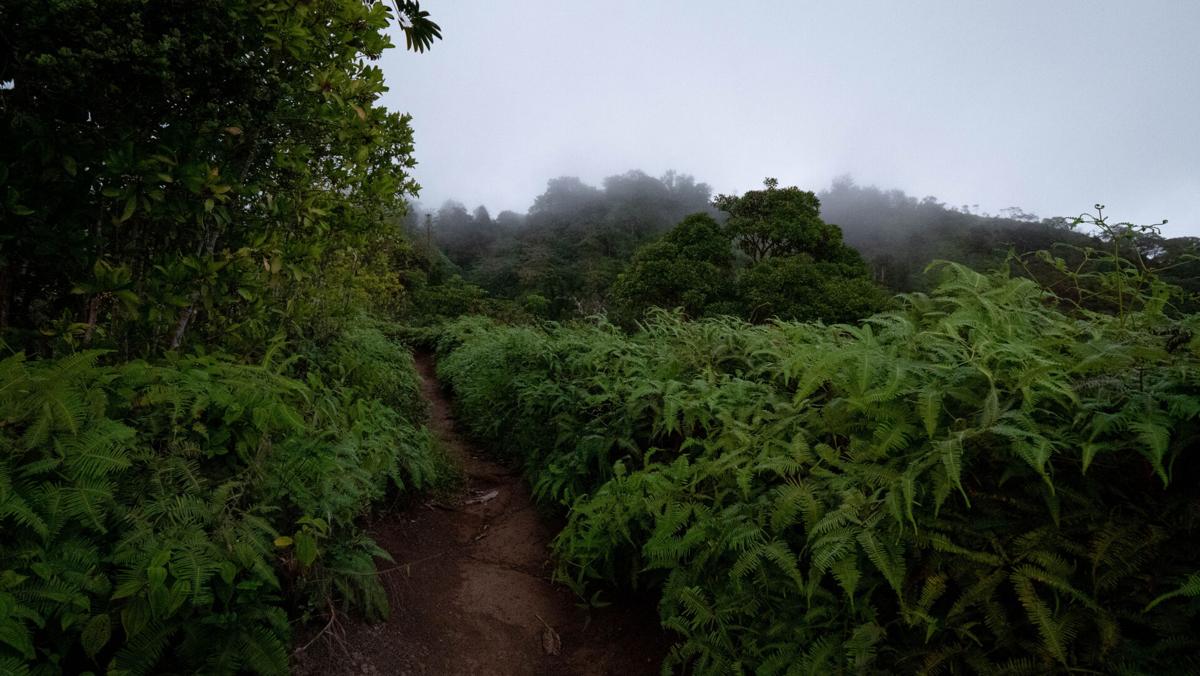 Ferns line a hiking for miles 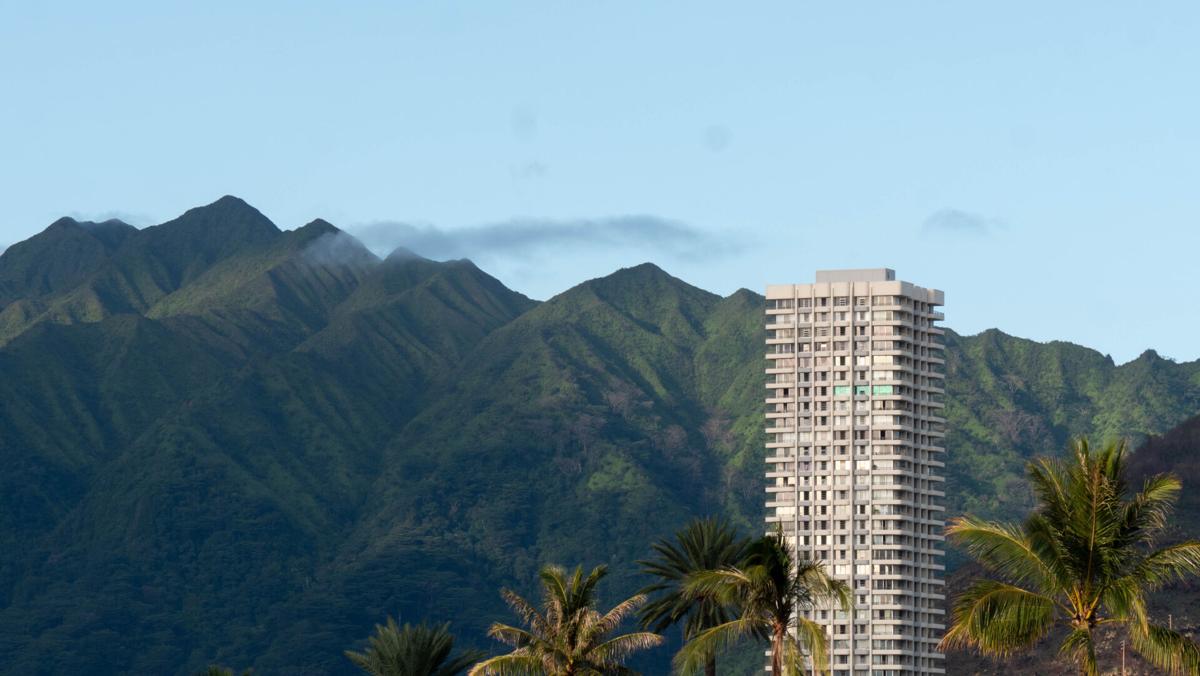 A skyscraper competes for the skyline with the mountains. Ala Wai 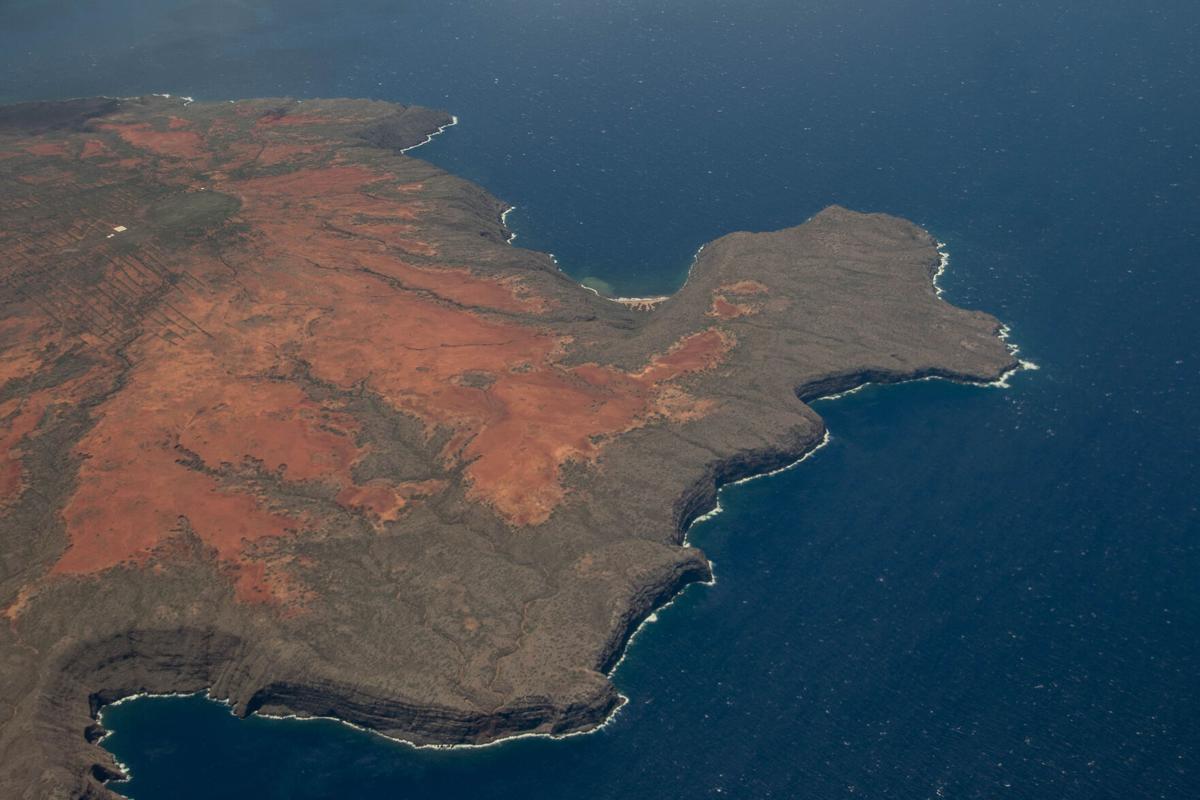 A part of Hawaiian Island chain seen from the air. 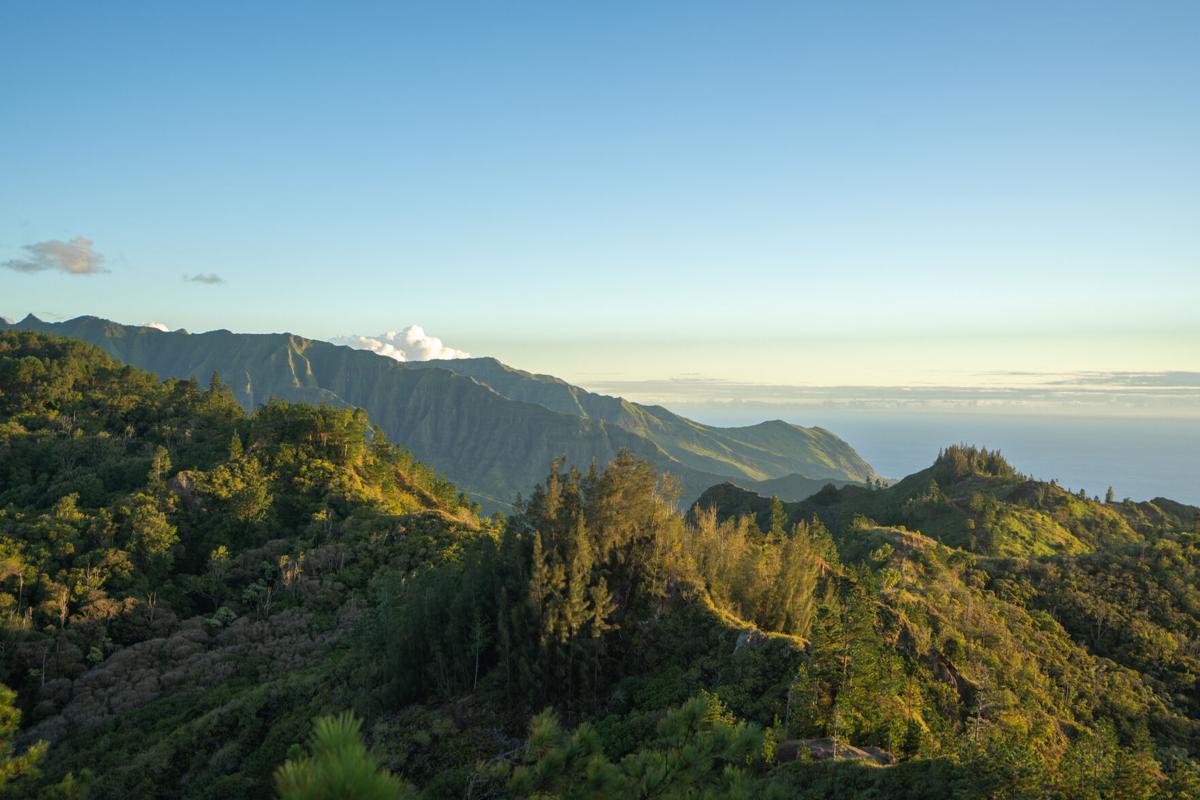 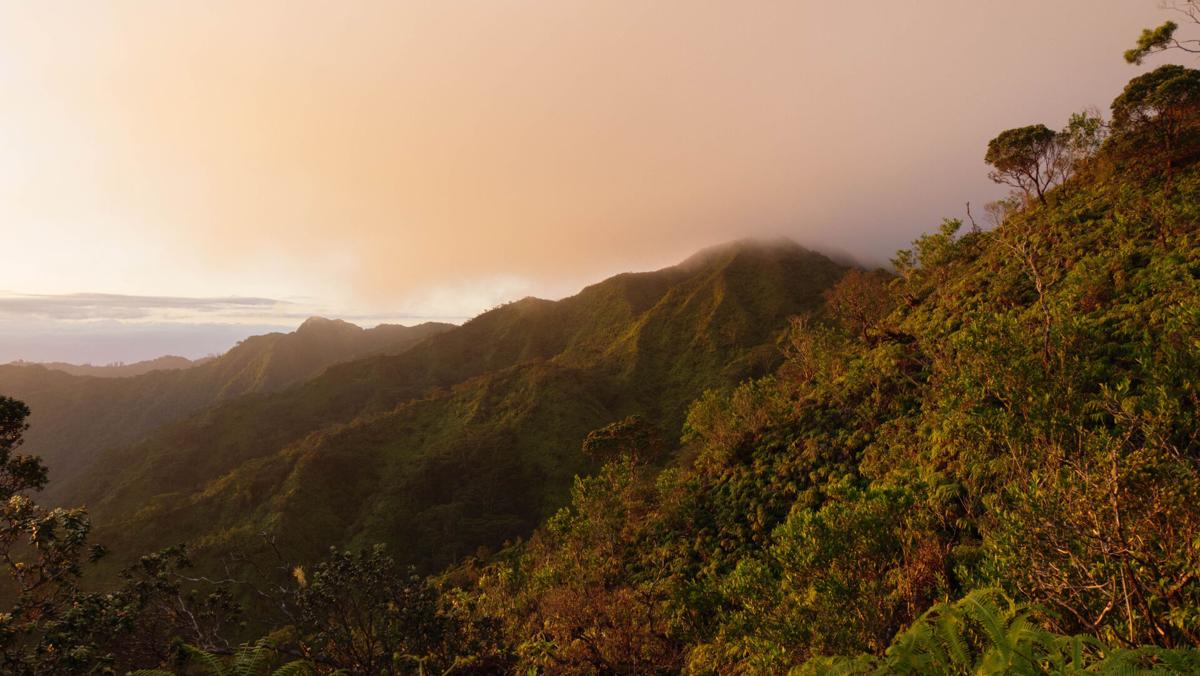 The mountainous ridgelines of Oʻahu at sunset with a tree canopy of both native and non-native plants. Waʻahila Ridge State Recreation Area

Through the geologic record, scientists have uncovered five major extinction events in Earth’s history. For each of these events, over 80% of the world’s species went extinct over a relatively short time period.

The worst of these extinction events, the Permian-Triassic extinction, killed over 90% of the world’s species. Humanity now finds itself in the midst of the sixth mass extinction in Earth’s history. Thousands of species have been lost in the last century and species are continuing to be lost at an accelerating rate.

As anthropogenic (human caused) impacts continue to grow and show no sign of slowing down, pressure on wildlife is continuously increasing.

As the extent of the current global extinction crisis comes to light, Hawaiʻi is especially vulnerable due to its unique biogeography.

The species which have evolved to live in this special place are under threat from urban expansion, invasive species and the impacts of climate change. And it is the very nature of the islands’ evolutionary history which predisposes them to extinction.

The plants and animals which naturally arrived to the Hawaiian Islands, left undisturbed for nearly 70 million years, inhabited a diversity of habitat types at different elevations and temperature gradients. With little to no gene flow from their source populations elsewhere in the world, these species were able to adapt to their new environments and quickly diversified into the wonderful assemblage of species we see today.

However, being so specialized to their respective habitats makes these plants and animals extremely vulnerable to any changes. With colonialism and westernized agriculture came significant habitat loss and disruption to native species. It is estimated that over 90% of Hawaiʻi’s dryland habitats, 61% of mesic (alternating wet and dry) habitats and 42% of wetland habitats have been lost.

Today, only 40% of Hawaiʻi’s land area is covered by native vegetation. Because of this dramatic loss of habitat and the continued introduction of non-native species, 75% of the plant and animal extinctions documented in the United States have occurred in Hawaiʻi.

The Hawaiian Island chain is among the most isolated in the world. To reach these islands, ancestors of our native species had to fly or float over 2000 miles (~3000 km).

One of the leading threats to biodiversity worldwide is the extinction of species through competition with or predation by invasive species, and the extreme isolation of Hawaiian ecosystems makes them especially vulnerable. Most of Hawaiʻi’s native birds, plants and invertebrates evolved without exposure to terrestrial mammals, reptiles and amphibians. They have not been evolutionarily conditioned to respond to pressure from these foreign competitors (Hawaiʻi’s only native terrestrial mammal is the Hawaiian Hoary Bat, and there are no native terrestrial amphibians or reptiles).

At a normal pace (one every 35,000 years), our ecosystems are resilient enough to handle the introduction of new species. But currently, an estimated 20-30 species are intentionally or unintentionally introduced to Hawaiʻi yearly and this rapid introduction of new species has contributed to a staggering loss of biodiversity over the past 200 years. As biodiversity decreases, ecosystem services vital to human survival are lost. Hawaiʻi has been dubbed “the extinction capital of the world” with invasive species as one of the leading threats to Hawaiian biodiversity.

Hawaiʻi has a long history with foreign species introduced by humans, not all of it negative.

The first Polynesian settlers brought many new species to Hawaiʻi. Most of those species, like kalo, ‘ulu, and kukui have integrated well into Hawaiian ecosystems. These introduced species are not harmful to native systems, so they are not considered invasive – unlike rats, which are destructive enough to be considered among the worst invasive species in the state.

With the arrival of James Cook in the 1700s came ungulates like cattle and sheep, as well as the European pig. Ungulate herbivores exhibit immense competitive pressure on native plants in Hawaiʻi. Soil disturbance from digging, overgrazing and ungulate movement has increased erosion and sediment run-off, impacting productivity in coral reef ecosystems.

Goats have devastated several native plants including the silversword, naupaka and koa, and seabirds have been impacted due to direct predation of eggs and chicks, as well as trampling of nesting burrows. Meanwhile, European pigs hybridized with the already introduced Polynesian pig to produce the wild boars which currently terrorize plant and invertebrate populations statewide.

Many of the place-based resource management approaches that Native Hawaiians developed were disrupted through colonization, displacement and disease. But luckily, we are in the midst of a major renaissance in biocultural conservation and restoration that seeks to restore relationships to place and traditional practice, management and protocol.

The Road to Recovery

Of the reported 1,653 species listed as “endangered” or “threatened” on the IUCN Red List in the U.S., nearly a third live in Hawaiʻi (501 species). The majority of introductions to Hawaiʻi occur in Honolulu and species are then spread between islands.

In 2017, Hawaiʻi launched a 10-year interagency biosecurity initiative to manage the risk of invasive species in Hawaiʻi and the interisland movement of these species. This initiative aims to take internal agency and legislative actions to fight for biosecurity at pre-border (entry prevention), border (response at ports of entry) and post-border (intra- and inter- island movement) sections. This plan is the first comprehensive biosecurity strategy that addresses the unique needs of Hawaiʻi.

In 2003, the Plant Extinction Prevention Program (PEPP) was created as a statewide effort to preserve and protect Hawaiʻi’s most critically endangered plant species. Until its genesis, Hawaiʻi was losing an estimated one plant species each year. However, in almost two decades, PEPP has dropped that number to zero.

Federal agencies such as the U.S. National Park Service, National Oceanic and Atmospheric Administration, U.S. Fish and Wildlife Service and the Department of Land and Natural Resources aid in preserving and protecting representative samples of biologically diverse Hawaiian ecosystems.

Habitat loss has increasingly displaced native and endemic organisms and remains a leading threat to species extinction in Hawaiʻi and around the world. These government entities work to restore habitats, recover endangered, threatened and rare species, remove alien and invasive species, and secure and protect areas of land and water that are biologically, geographically and culturally significant so they are preserved from future destruction.

One of the most significant examples of habitat and species protection in Hawaiʻi is the establishment of the Papahānaumokuākea Marine National Monument.

This sacred area located in the Northwestern Hawaiian Islands was declared the largest marine protected area when it was created on June 15, 2006 under Presidential Proclamation 8301 and has served as a gateway for many other accomplishments in marine conservation, including the birth of large-scale marine protected areas.

In August 2016, President Barack Obama made the decision to expand the monument to 582,578 mi2 from the original 139,818 mi2, making Papahānaumokuākea larger in size than any existing marine or terrestrial conservation area in the world.

The declaration of Papahānaumokuākea as a Marine National Monument is one to be celebrated for the extreme accomplishments made in scientific discovery, cultural reawakening, restoration and conservation management as it hosts more than 7,000 species of marine life, many of which are endemic to the area, 14 million seabirds, over 20 seamounts and 22 Native Hawaiian cultural activities. As one of the most isolated, culturally rich and biodiverse places on Earth, the Papahānaumokuākea Marine National Monument is proving its importance in the protection and preservation of Hawaiʻi's culture and unique environment.

There are also important examples of communities working to restore biocultural diversity through an ahupuaʻa based approach.

For example, in Heʻeia, Oʻahu, several non-profit organizations and the Heʻeia National Estuarine research reserve are working to restore the ahupuaʻa from mauka to makai, including restoring biodiverse agroecological systems including agroforestry, loʻi kalo and fish ponds, as well as native stream, wetland and coral reef habitat.

A key objective of this approach is on restoring community connections to and relationship to place and to each other. It is ultimately these relationships which sustain conservation efforts and ensure that biocultural landscapes are properly valued so that there is widespread support for their protection and restoration.

The amount of conservation work to still be done in order to prevent a mass extinction may seem daunting and hopeless, but a silver lining exists. Hawaiʻi has many conservation initiatives in place to preserve its already diminishing species. Due to the interconnected nature of ecosystems, actions designed to help one species often benefit a wide range of species.

Ways that YOU can help

As anthropogenic processes continue to encroach on the biosphere, evidence of a sixth mass extinction event becomes more visible than ever before. Invasive species and habitat destruction remain to be the leading causes of modern extinction and global biodiversity loss. Fragile island ecosystems, such as that of Hawaiʻi, experience the consequences more severely.

Humans have a responsibility to the species that came before us; to the plants and animals that have made Hawaiʻi their home and built the ecosystem for thousands of years. Implementing stricter biosecurity regulations, such as on plant and animal imports, and taking an ethical environmental approach to development projects can significantly reduce the threat of extinction.

Other actions such as crowdsourcing to support conservation efforts and participating in citizen science projects can also aid in invasive species management and tracking biodiversity in lesser studied areas. There are also many opportunities to attend community work days from mauka to makai restoring native ecosystems and biocultural landscapes.

Species extinction equates to biodiversity loss which is detrimental to ecosystem and human health. Biodiversity plays an important role in maintaining the ecological processes that all life depends on.

Plants, animals and microorganisms operate together to create a functioning and livable environment, providing food and medicine, regulating climate, purifying air and water, and nourishing soil for sustained and new life. When one species goes extinct, it creates a hole in the ecosystem that disrupts the fabric of the natural world and the repercussions are profound.

The loss goes beyond the species itself and extends throughout the ecosystem, impacting not only the overall ecological equilibrium that humans benefit from, but the spiritual and cultural associations we have with nature as well.

The current extinction crisis is undoubtedly of our own making with more than a century of unprecedented habitat destruction, pollution, invasive species colonization and climate change. Tackling this crisis will require global, local, and individual actions to mitigate the damage that has already been done and start rebuilding the biodiversity which has been lost.

Conservation Conversation is contributed by the Society for Conservation Biology Hawai´i Chapter. To join the chapter and see more opportunities to get involved in conservation efforts in Hawai´i visit www.HISCB.org.

Valentina Alvarez is a graduate student in the Zoology program with interests in conservation, invasion ecology, and the preservation of biodiversity through the utilization of cutting-edge genomics methods. She is also an active volunteer of Sustainable Coastlines Hawaii, a non-profit organization fueling the preservation of our coastlines and wildlife through education and community involvement.

Laura received her Bachelor’s in Marine Ecology and Conservation from the University of Hawaiʻi at Mānoaand is currently pursuing her Master’s in Conservation Biology through the Miami University of Ohio’s Global Field Program. As an avid conservationist and nature enthusiast, she actively volunteers with a local non-profit organization, Sustainable Coastlines Hawaiʻi, to help keep Hawaiʻi’s beaches clean and educate community members about plastic pollution. When she’s not at work, studying, or volunteering, you can most likely find her outdoors; at the beach, in the water diving or surfing, or hiking up a mountain. Her love of and interest in taking care of the environment around her stems from being born and raised on Oʻahu.