If it wanted to, the University of Hawai‘i at Mānoa’s undergraduate student government could keep the public out of its meetings or withhold public documents.

That’s because the state attorney general ruled in 1985 that the Associated Students of the University of Hawai‘i at Mānoa is not considered a state board. Yet the Board of Regents is subject to the open meeting law, and it founded ASUH in 1912.

Hawai‘i’s Sunshine Law governs the way state and county boards conduct their meetings. It requires most discussions and documents to be accessible to the public. Meetings minutes are to be recorded and posted within 40 days.

While ASUH opens its meetings to the student body and typically publishes its own documents, it has, at times, fallen behind with posting the meeting minutes on its website.

If ASUH was subject to the Sunshine Law, it would have been in violation for not posting each of its meeting minutes within 40 days.

ASUH President Donavan Albano said, “As we’re transitioning to ensuring that our website is updated, we will be sure to have our minutes be uploaded more consistently ASAP in accordance with our rules and will coordinate with our office staff.”

When asked about ASUH being exempt from the Sunshine Law, Albano did not respond for immediate comment.

The request for an opinion of whether ASUH is subject to the Sunshine Law came from Harold S. Masumoto, former vice president for administration, in 1985.

Past ASUH presidents had raised issues about its meetings in the 1980s.

The attorney general’s office at the time found that ASUH is not a state board, agency, commission, authority or committee.

“The ASUH is not empowered to take official action on behalf of the state or its political subdivisions,” according to the AG’s office’s opinion.

The AG’s office based its conclusion on a Georgia Supreme Court ruling and another opinion from the Kentucky AG. Both found that student governments are not state entities.

ASUH, which is made up of eight executive members and 30 college senators, represents more than 10,000 full-time undergraduate students. They are responsible for student and campus affairs, lobbying at the state Legislature, creating proposals and handling internal financial affairs.

This year, the student government has an operating budget of $573,915, which comes from student fees and liquidated stocks.

The student government is also in charge of how much money is appropriated to fund proposals like the free Hawaiian language class.

Hawai‘i is one of just eight states that exempt student governments from the open meeting law, according to a review of states’ rules from The Student Press Law Center.

The University of Nevada, Las Vegas’ student government states in its bylaws that it is subject to Nevada’s open meeting law, which among other things requires certain documents be made available to the public.

In New Jersey, the Montclair State University student government amended its bylaws to comply with state meeting law after being sued by the school newspaper, the Montclarion.

In 2018, Arizona State University students sued their student government for not posting each of its meeting minutes, even though it was required in their bylaws.

ASUH’s bylaws make no reference to the Hawai‘i Sunshine Law.

Former regent Jeffrey Portnoy, an attorney, said ASUH should comply with the Sunshine Law whether they are required to or not.

Recently, the ASUH Senate dealt with an issue that would have violated the Sunshine Law.

Meeting minutes, or records of the meetings, were not posted for the last two to three years until last week, when Ka Leo O Hawai‘i asked about those meeting minutes on Sept. 15.

The documents were uploaded from the summer and fall semesters on Sept. 16, including missing minutes from the 107th Senate and 106th Senate.

Some meeting minutes were available on the student government’s agenda.

ASUH Secretary Mikaelyn Gogue is currently trying to update the missing minutes after a secretary from the 107th Senate lost some of the audio recordings.

At the Sept. 15 ASUH meeting, Gogue informed the senators that she will be working with the office staff to be sure the minutes are finalized and posted to its website.

“There’s been a little bit of talk about codifying minutes of the last Senate on our website,” Gogue said at the meeting. “We have since uploaded all of the minutes for the 108th [Senate], and there has been an update with 106th [Senate]. I will be working with the office staff to fix the documents. But because I don’t have audio, I can’t fix everything.”

Former ASUH President Landon Li said in an interview that they had an issue with updating the meeting minutes. He added that two former secretaries were unable to fulfill their duties and lost some of the meeting recordings.

“Getting those minutes up was my priority,” Li said.

Below is the 1985 opinion on ASUH being exempt from the Sunshine Law. 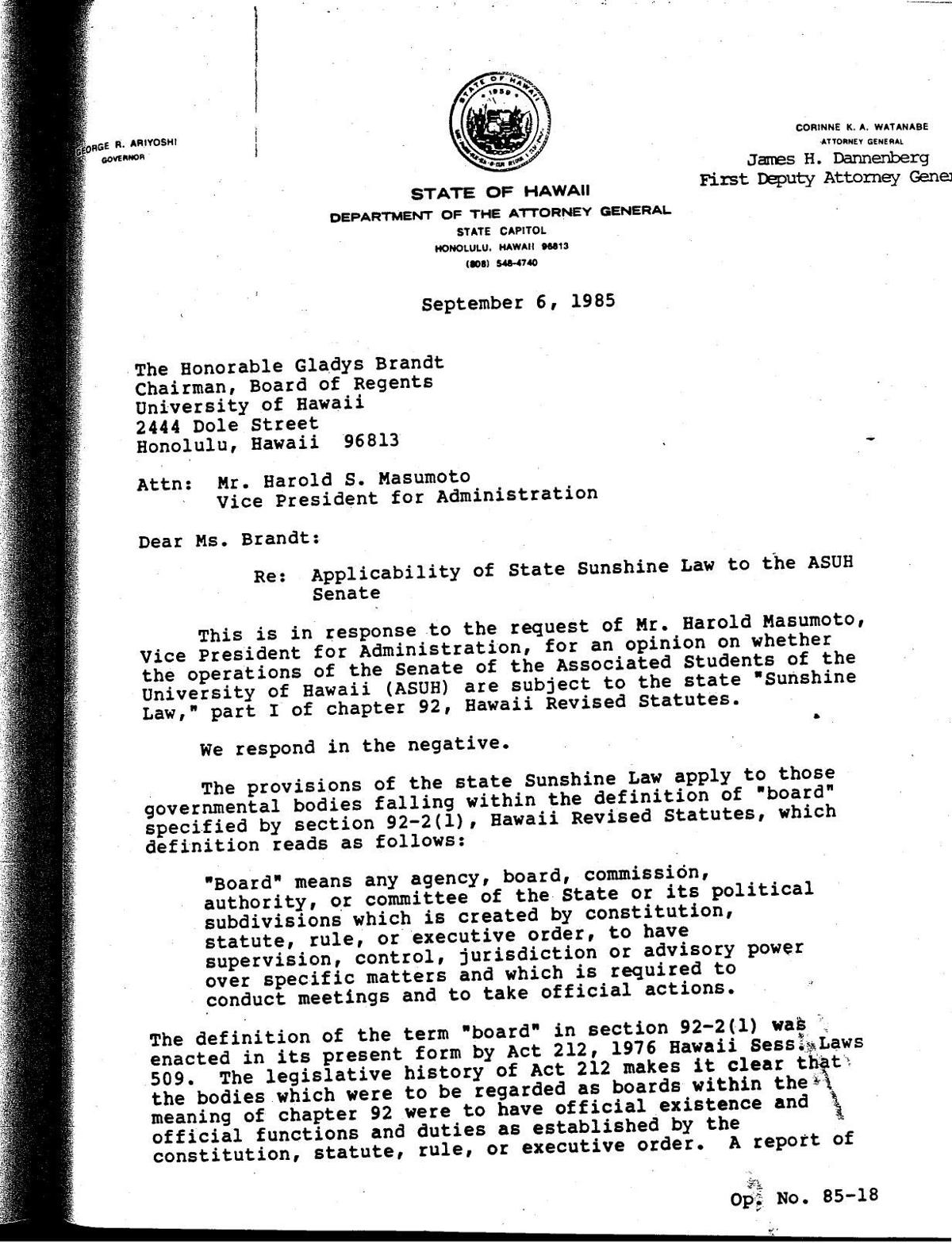