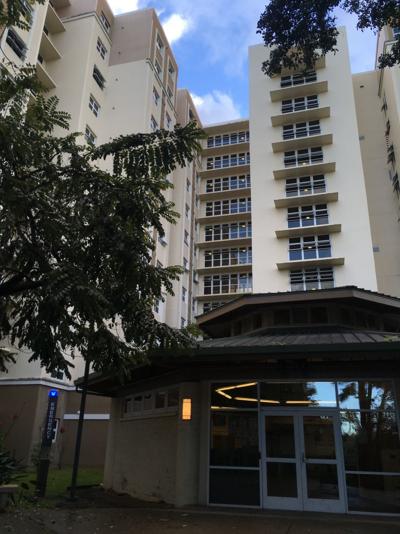 He was wearing a white long-sleeve shirt with a badge on his left breast. He sat on a bench 25 feet in front of my car while I was parked at the Frear Hall loading bay. It was just after 8 p.m., and I was waiting to pick up a friend.  And I thought nothing more of the guy. At that time, I felt like there was no reason to pay any attention to him. I thought he was a security guard who just got off work and was waiting for a ride home.

He is about six feet tall with a medium build, but that’s about all I can see from afar. I put my head down to change the music on my phone and I hear a knock on my window - and it’s the guy. I look up and my first thought is that I’m parked in the wrong spot, so I crack my door a few inches. I look up at his face, then down to his waist and I see he has a large kitchen knife pointed at me.

In the seconds that all of this was happening, I had the presence of mind to think clearly.

Is this really real? Is this happening?

What is most important at this moment? I need my phone and wallet, so I subtly grab them, making sure not to draw any attention or aggravate him.

I tell myself, just get out, this car isn’t worth getting stabbed over.

Again, calmly but sternly, he says,

I get out and he drives my 2006 Volkswagen Golf towards Hale Ilima and the freshman dorms.

Thankfully, since I still have my phone, I’m able to call the police. I see a woman who was parked behind me when I pulled in, so I run 30 feet over to her. My hope is that she saw what happened.  While on the phone with the police, I realize the guy who carjacked me is going to hit a dead-end and has to drive past us to exit. I ask the woman if she could take a video of this guy when he comes back up the hill.

My next thought is, how crazy and desperate is this guy? Will he try to run over me and this innocent bystander?

I take a few steps into the road to see what he does and he speeds up past me as if he was going to run me over. I’m standing in the road as he keeps going and turns right on Dole Street, and I watch this guy drive away with my car.

One minute after exiting my car, my friend that I was picking up comes down from the dorms and I tell her some guy just pulled a knife on me and stole my car. I then confirm that the woman who witnessed the incident behind me got the video.

When I told my friend what happened, she said she didn’t believe me at first, then it became more and more real for the both of us.

The Honolulu Police Department responded within minutes as well as campus security. I remember having to sit down because I physically couldn’t stand up; I couldn’t process what had just happened.

In the middle of all of this I came to the realization that my house keys were still in my car, as well as my insurance papers with my address on them. That’s when it becomes not only about my own safety, but that of my landlord and neighbors as well. At 10 p.m., HPD sent a cruiser to my apartment and tells me everything’s OK and that they’ll stick around for a while. This made me feel a lot better as now my focus shifted to the people around me.

I finish up with the police and Uber back home. I didn’t even try and sleep that night, I sat downstairs with my eyes stuck open.

The next day I had my locks replaced and I went to baseball practice to get away from everything and that was a big help. My teammates and coaching staff were nothing but supportive.

I manage to sleep about two hours on Tuesday night only to be awoken by a call from the police, saying they found my car 11 miles away in Salt Lake and that I need to come take a look at it. So I Uber down there and I see my car. It was a weird feeling knowing this guy who threatened my life had been sitting in it, driving it. He even adjusted the seat and mirrors. It was a very eerie feeling.

The police had also recovered my car key, and I drove my car back home. I also came to find out that the police caught the suspect and that he had been involved in two other robberies, one with a firearm.

The fact that this guy could have had a gun while on campus made me even more  thankful that no one was hurt.

In my four years at the university, I never once thought that this type of crime would happen to me, let alone on campus. The school is a public place, so anybody can walk onto it. However, campus security does a great job working with HPD and their around-the clock security.

But the best way to be safe is to keep your guard up and always be aware of your surroundings, because you just never know.

Crimes on campus are down, but students still need to be aware

Crime doesn’t stop when the semester starts. It is important that students utilize every tool available to them to stay safe on campus.