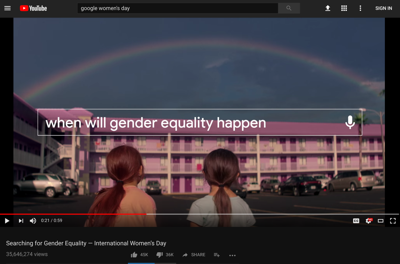 To celebrate International Women’s Day, Alphabet Inc. released a commercial for Google Search, which claims that people around the world are searching for the term “gender equality.” As of March 14, 2018, the advertisement has garnered over 36,000 dislikes and over 2,500 comments, most of which accuse Google of sexism against men.

To understand the motivation for these comments, we need answer three basic questions: Why are anti-feminists hostile toward the feminist movement? Where did this hostility originate from? And why are they unwilling to see past their biases?

“It’s us against them”

Most of the criticism toward the advertisement was over the statement, “The future is female.” The assumption with this statement is that feminism is not about equality, but is a propaganda campaign to make women superior to men.

“I guess the assumption ‘if women win, men lose’ is the problem here,” Meda Chesney-Lind, chair of the Department of Women's Studies at the University of Hawai’i at Mānoa, said. “We’re not saying everything’s equal now, and if we step forward in what’s described in that ad, then there’s going to be an imbalance.”

Feminists are not looking for more than their fair share. They see unfair treatment based on gender or race and are looking to end discrimination for both men and women. Anyone who wants equal rights should stand up for them.

Sexism in the media

The sad truth is many female characters in the media are often treated as either stereotypes or sex objects. While many women are sexualized, such as in “The Fast and The Furious” films, feminist women are often also portrayed negatively. Feminist characters can appear self righteous or snotty, like Donna Pinciotti from “That ‘70s Show.”

People can be conditioned to think a certain way based on the society they see portrayed in media. If a child thinks that this character represents the everyday feminist, they will get the wrong idea about feminism as a whole. The same goes for those who grew up watching women who were represented as either housewives or sex objects. If someone sees something as normal, they will retain that belief even when people say what they are thinking is wrong.

One might wonder why someone would willfully ignore study upon study that definitively says that they are wrong. The answer is the same reason why there are still flat-earthers and anti-vaxxers in the world: When those people are presented with information that goes against their previous biases, they feel like the information is attacking them.

This phenomenon, which was studied by Brendan Nyhan of the University of Michigan and Jason Reifler of Georgia State University, is better known as “the backfire effect.” According to Nyhan and Reifler, people are more likely to believe their own biases when they are presented with evidence that goes against their own beliefs. This makes having a conversation about feminism difficult, because anyone who thinks that the other side supports female superiority is not going to change their mind, no matter what you tell them.

We need to look to films like “Mad Max: Fury Road,” “Wonder Woman” and “Black Panther.” These films have strong female leads that do much more than act as stereotypical housewives or sex objects, and their feminist tendencies are not about making them superior to men, but about female empowerment.

If we can eliminate the sexist bias in our media, then future generations are more likely to realize that women are true equals, which the Google ad was trying to promote in the first place.