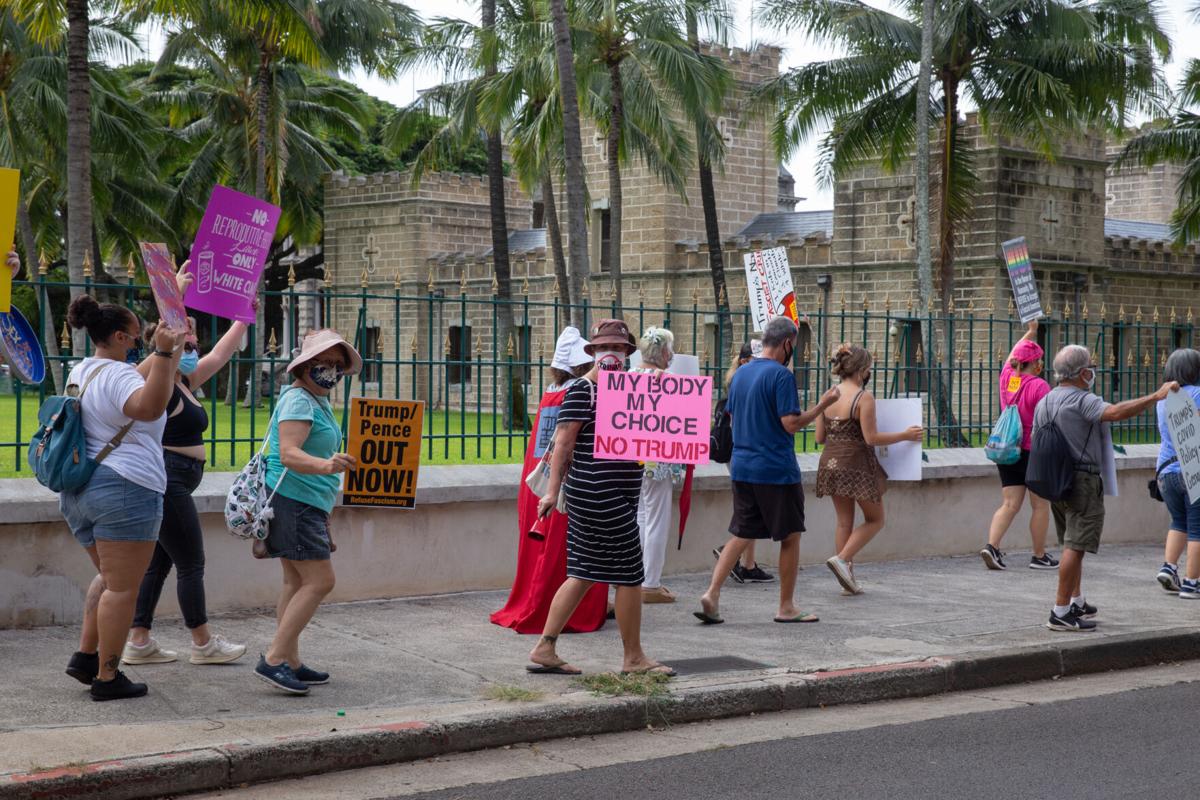 Protesters begin marching down Richard St., making their way around the state capital. 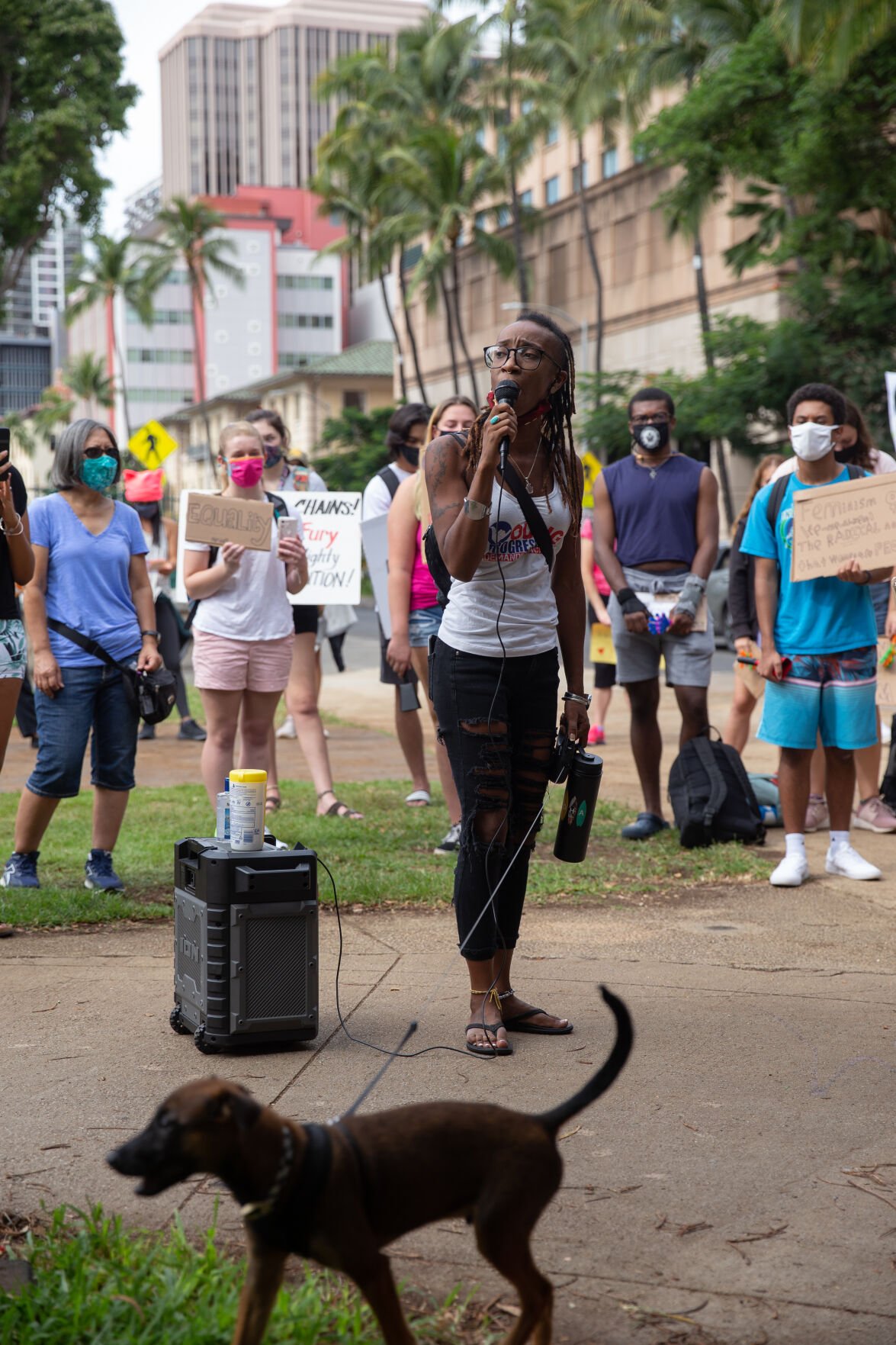 In support of the Women's March, Destiny shared her poetry with protesters. 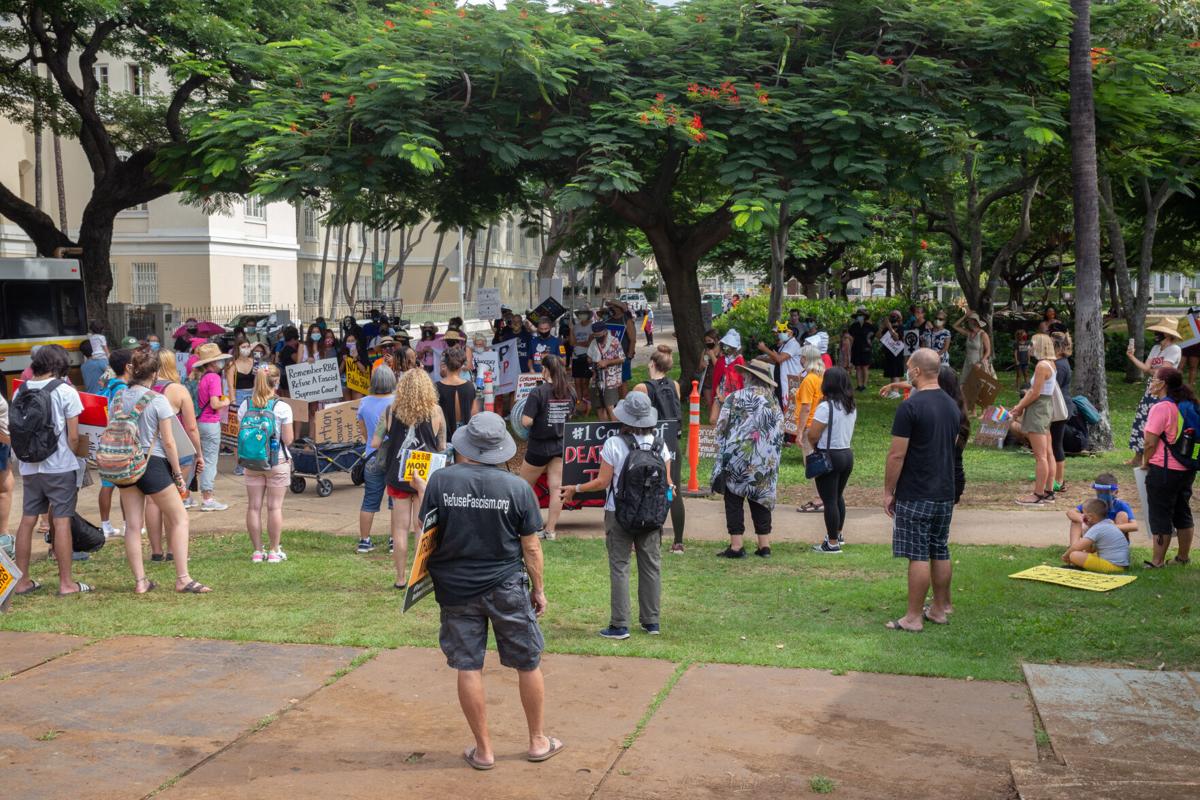 It is the morning of Oct. 17 at the State Capitol in Honolulu. Women, men, and gender non-conforming people gather with a common goal in mind: to march for women. 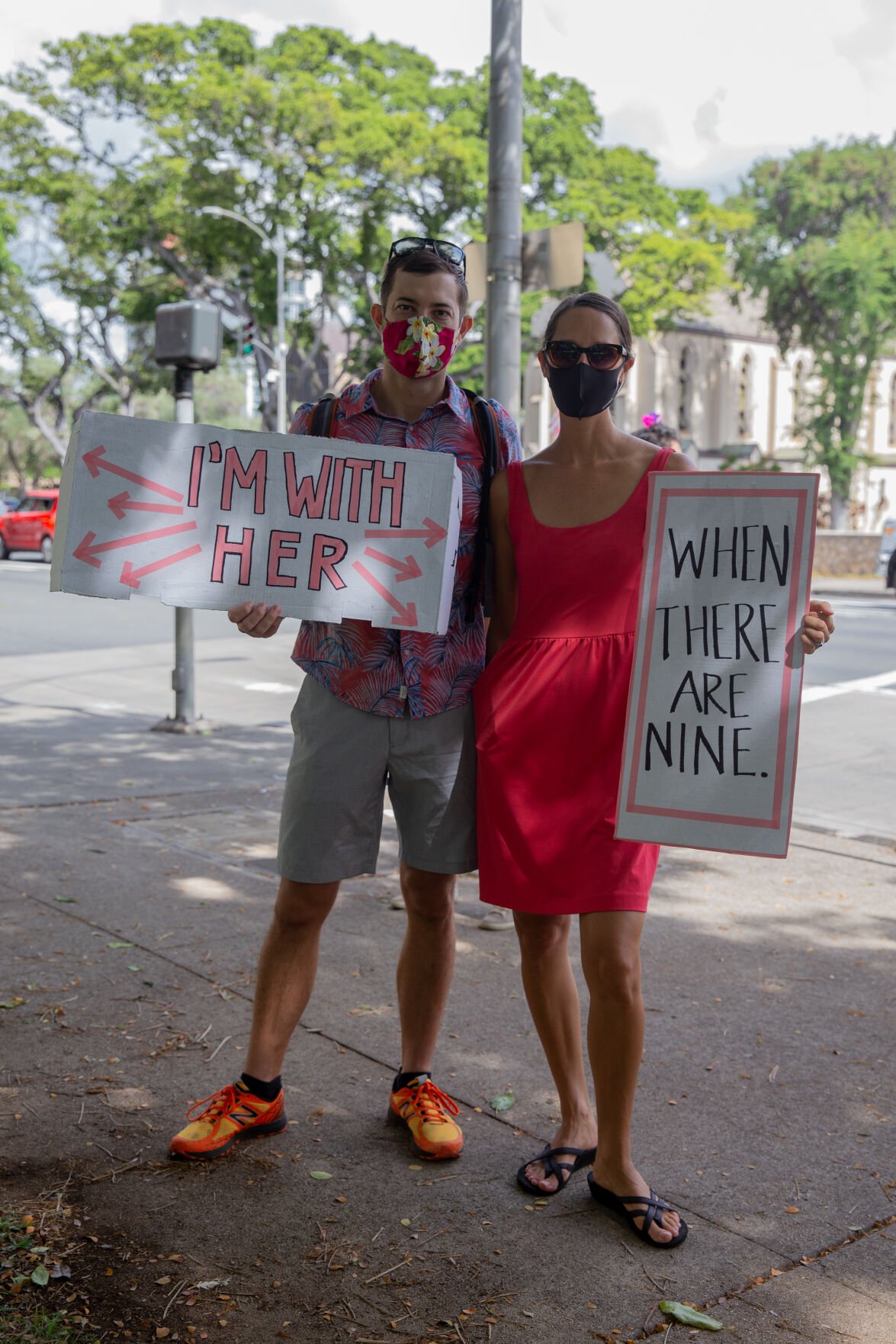 Couple Lauren and Ryan came in support to, "raise their voice." 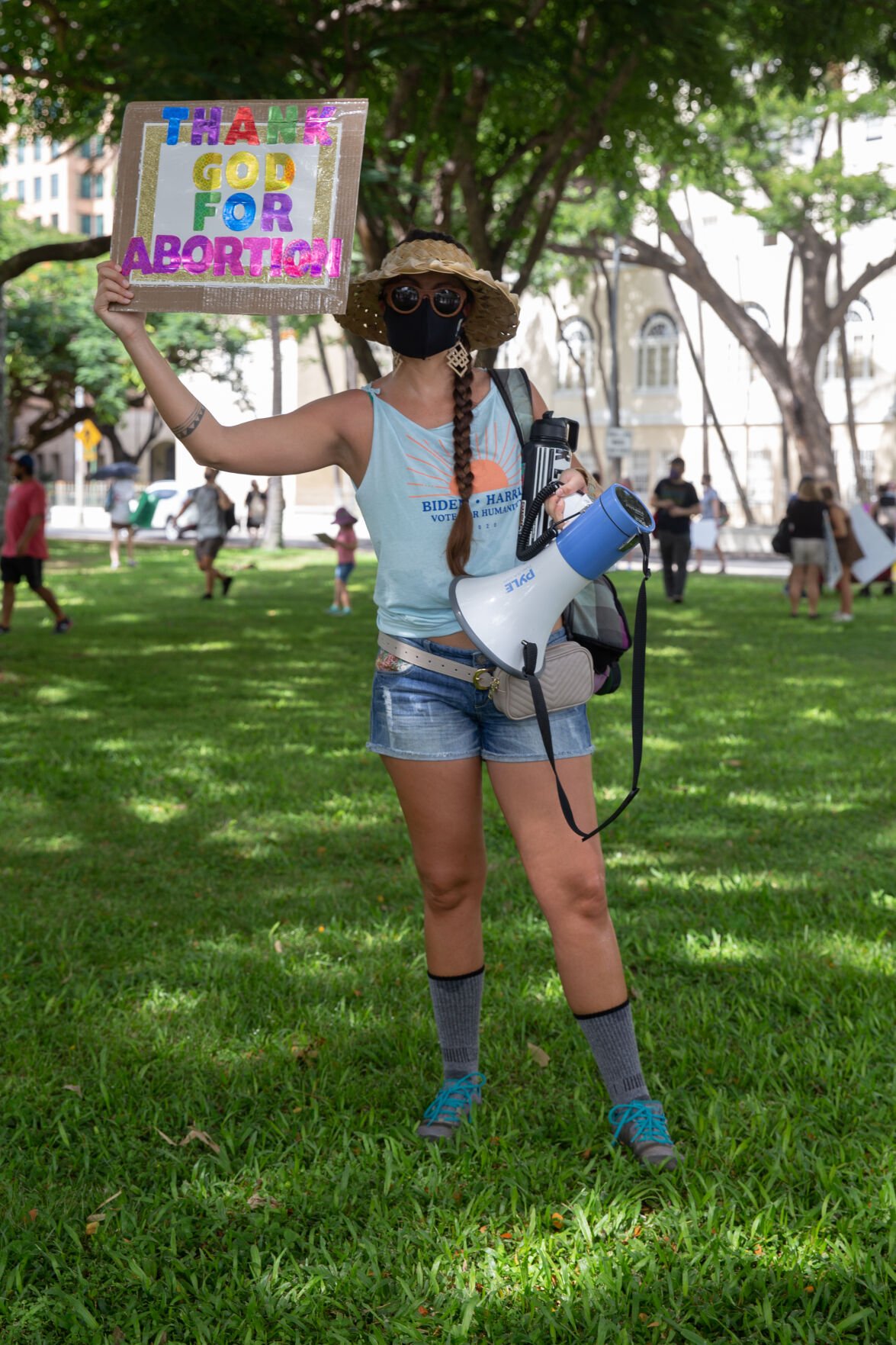 One of the Women's March orgnizer Kate, holds a sign "Thank God For Abortion." 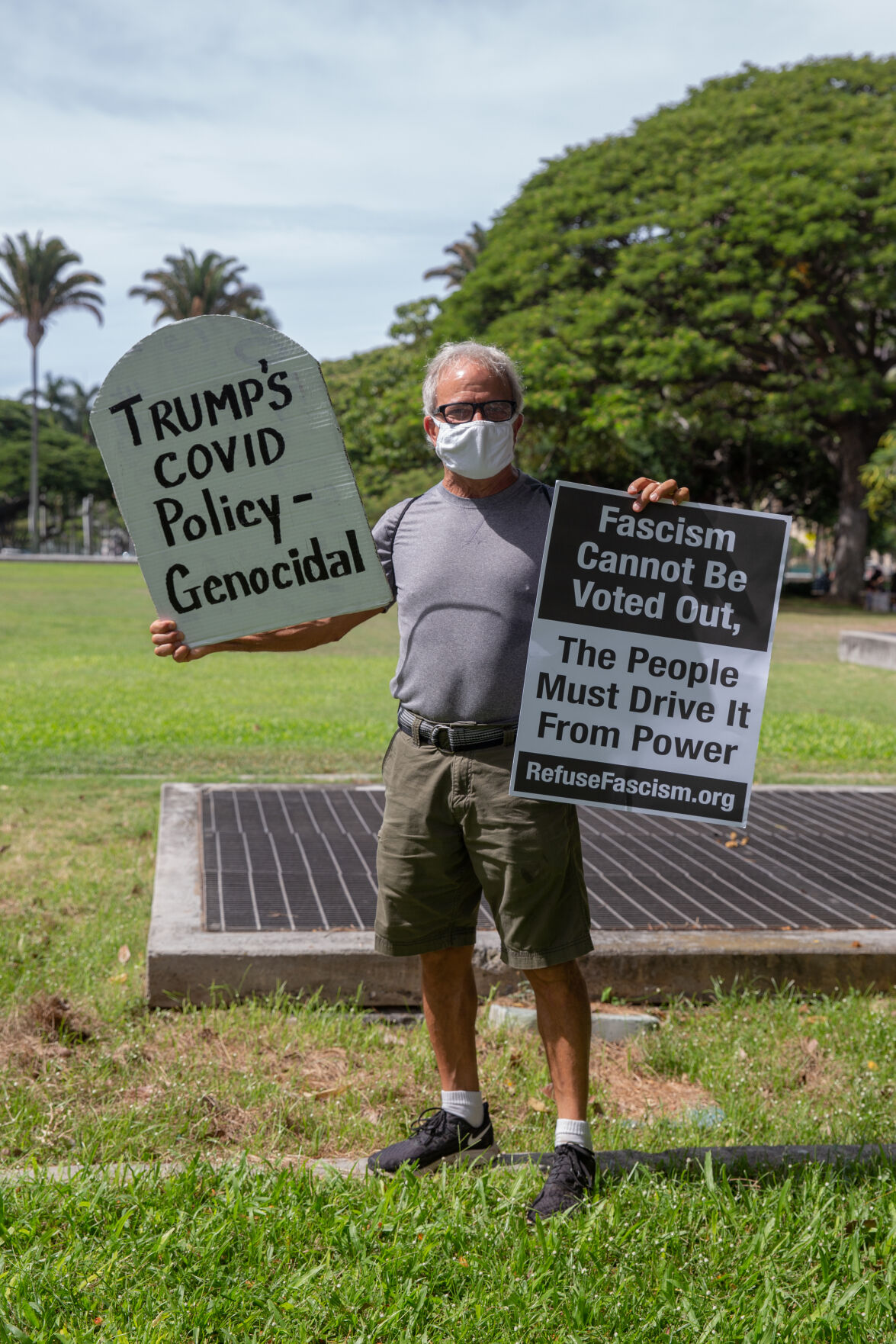 Mike says he came to support because,"I can't continue to watch what is happeing." 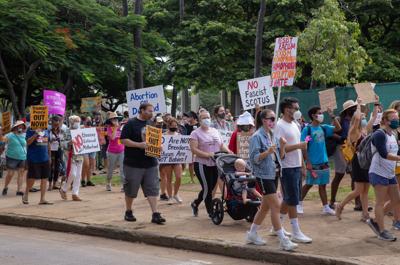 My name is Johanna Leo and I was born and raised in Mexico City. I just moved to Hawai'i a year ago for college, so I’m currently a sophomore at UH Manoa. I am an English and Political Science major, minoring in Psychology.

It is the morning of Oct. 17 at the State Capitol in Honolulu. Women, men, and gender non-conforming people gather with a common goal in mind: to march for women. Signs demanding safe abortion sit next to those urging others to refuse fascism. To some, the correlation between all these fights might not be immediately apparent. They might perceive politics, LGBTQ+ rights, racial equality, and accessible healthcare as separate fights. And even though they can be, they find a haven where they intersect with each other to battle gender inequality. Because all roads lead back somehow to feminism, where women of different races, sexual orientations, and walks of life intersect with a single purpose: fight for equality and their rightful place in society.

The march begins with people gathered around a microphone, listening to what the women using it have to say. One of those women was Destiny Sharion, a black poet and artist who shares two of her poems before the march begins. Her first poem, titled “I Get It,” has an opening line that stuck with me throughout the rest of the march. “I get it. I’m a black woman, so I speak for all black women. Right? Right.”The reason this quote stuck with me was because  it serves as a building block and context for the rest of her poetry and the lens through which the audience will look at it for. It creates questions about race when interlocked with feminism: how is feminism different and how is it the same for a black woman? How does one speak about it from an individual perspective, and make it clear that not because you are a black woman it means the same thing for all than it does for you?

These questions rang in the back of my mind as I listened to her poetry, which can be found here. I addressed them during our interview, and also asked about her inspiration. “I really like to use art, poetry, dance… as a form of protest or advocacy for political change and activism. I feel like it’s a good way to channel some of the energy that is pent up,” Sharion said. I asked her what it meant for her, as a black woman and individual, to be fighting and marching versus what she thinks it would mean for a white woman. “I think that they can be contemptuous at times, which I think is part of why I wanted to be here today. I have so many friends too that want to show support, but don’t really know how. And it’s unfortunate, because they can get kind of apprehensive because of things like that.”

Feminism and its place in the LGBTQ+ community

“Homophobia and transphobia is a major disease. Get well soon!!!” Is what a sign held by a group of three people read. This sign was one of the many that made me realize all the people this women’s march was fighting for; this march doesn’t only fight for cisgender women and their rights. It fights for non-binary people, for transexual people, for women who like women, and more. This is a fight for gender equality, for turning the world into a space where all women and all those discriminated for their gender identity can find safety.

The group of three people was composed of May, Mel, and Miha. When asked what the march meant for them, especially as gender non-conforming and LGBTQ+ people, Mel spoke first. They said “it’s a call to action for all those who have been harassed or oppressed. We’re standing up and saying ‘we are here.’” May elaborated and agreed with Mel, adding that this also represented solidarity with everything going on in the country. On the other hand, Miha agreed, but said that for her personally it means something great for women’s rights. “I feel a lot that women are oppressed in ways that aren’t really noticeable or respected in the workplace, that happens to me a lot. I also feel like we don’t have as much control over ourselves, as much autonomy as men do.”

Feminism and the upcoming election

Even though the women’s march was full of signs demanding healthcare and rights for women, few were as specifically political as those from the organization Refuse Fascism. This organization has made it a goal to protest non-violently every day for 30 days through the elections. One of the marches they have participated in is the women’s march, but even if their presence in this protest can be seen as only another one in their thirty days, their presence and their message is essential to the women’s rights movement.

Being active politically is one of the most direct ways in which someone can demand the rights they are owed. By voting for candidates who stand for the rights that someone believes in as an individual, people are directly choosing those who stand for the world they want to live in. Through their presence in the protest, Refuse Fascism has created an important reminder: To make this fight significant, one must vote for candidates who look out for women’s rights and seek to protect them, versus those who do not. Engaging in democracy and fighting to preserve it is a fight to preserve all the rights people are owed, especially the ones who are usually pushed aside when priority must be taken, such as women. Refuse Fascism serves as a reminder to vote, a reminder to look at who the candidates are and support those who support what your signs demand. It’s a reminder that there is power in using your voice, and an encouragement to do so.

Still, some might argue that a political organization has no place in a fight for women’s rights, and takes the focus away from the problems being fought for.  This point is valid, and one to keep in mind because, sometimes, unrelated causes do use platforms not meant for them to speak. This can take attention away from the main issue and diminish its importance in the eyes of others. However, that is not the case for Refuse Fascism. As mentioned earlier, they serve as a reminder to engage in democracy, which is always welcome. But they also oppose a specific candidate and declare him as a danger to democracy itself. And whether you agree with whether Donald Trump is a threat to democracy itself, what cannot be argued with is that he is a threat for women’s rights and even moreso, women’s safety.

Donald Trump has a history of referring to women in vulgar and disrespectful ways, such as calling Rosie O’Donnell"a slob,” and as having a “fat, ugly face,” or his infamous comment about his own daughter, Ivanka, in which he said “she does have a very nice figure. I've said if Ivanka weren't my daughter perhaps I'd be dating her." Both of these comments are inappropriate when coming from anyone, but they are a sign of alarm when coming from a president. His disrespect for women isn’t only verbal, but has translated into actions that resulted in 26 sexual misconduct allegations. Even though he has claimed allegations are lies, there is a question to be asked when considering that possibility. If this was any other job, would anyone risk hiring someone with 26 sexual misconduct allegations? Would any person hiring even go through the trouble of finding out if they’re true? There’s 26 of them. The odds of at least one being true is high. And if that is the case, then the man running the country is the man all the signs are addressing. All the signs about men who disrespect women, who sexually assault us, who don’t believe we deserve power over our own bodies. Refuse Fascism isn’t taking the focus away from the fight, but pointing out a culprit for why the fight has to happen in the first place. And they’re telling those listening what they already know: They have the power to vote him out.

Marching for women is a fight for more than immediately meets the eye. The women’s march on Oct. 17 was a safe haven for those fighting for gender equality in all forms, for those seeking political change to support the cause, for those sharing art and for women of different races standing up for themselves. The women’s march was a display of intersectionality and sorority, and a successful medium through which a single message is being sent: Our voices matter.