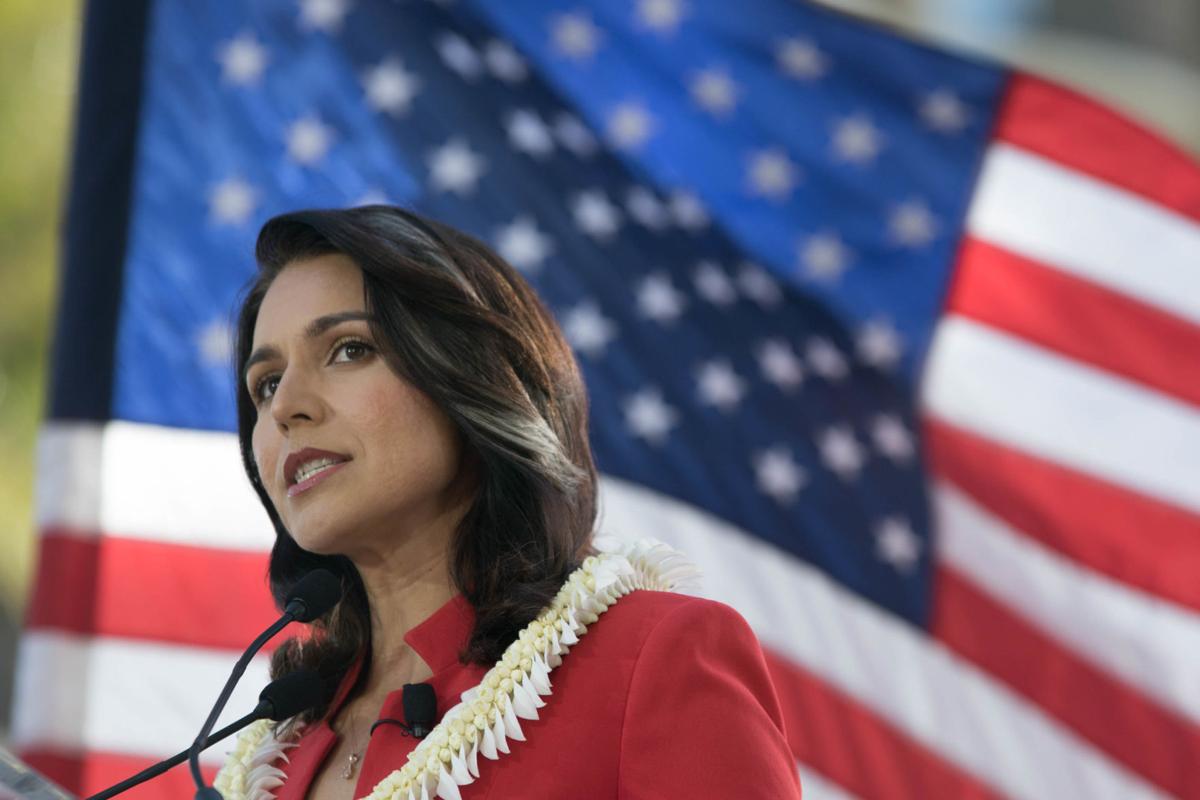 Rep. Tulsi Gabbard officially kicked off her presidential campaign with a rally at an event on the great lawn of the Hilton Hawaiian Village in Waikiki on Feb. 2. 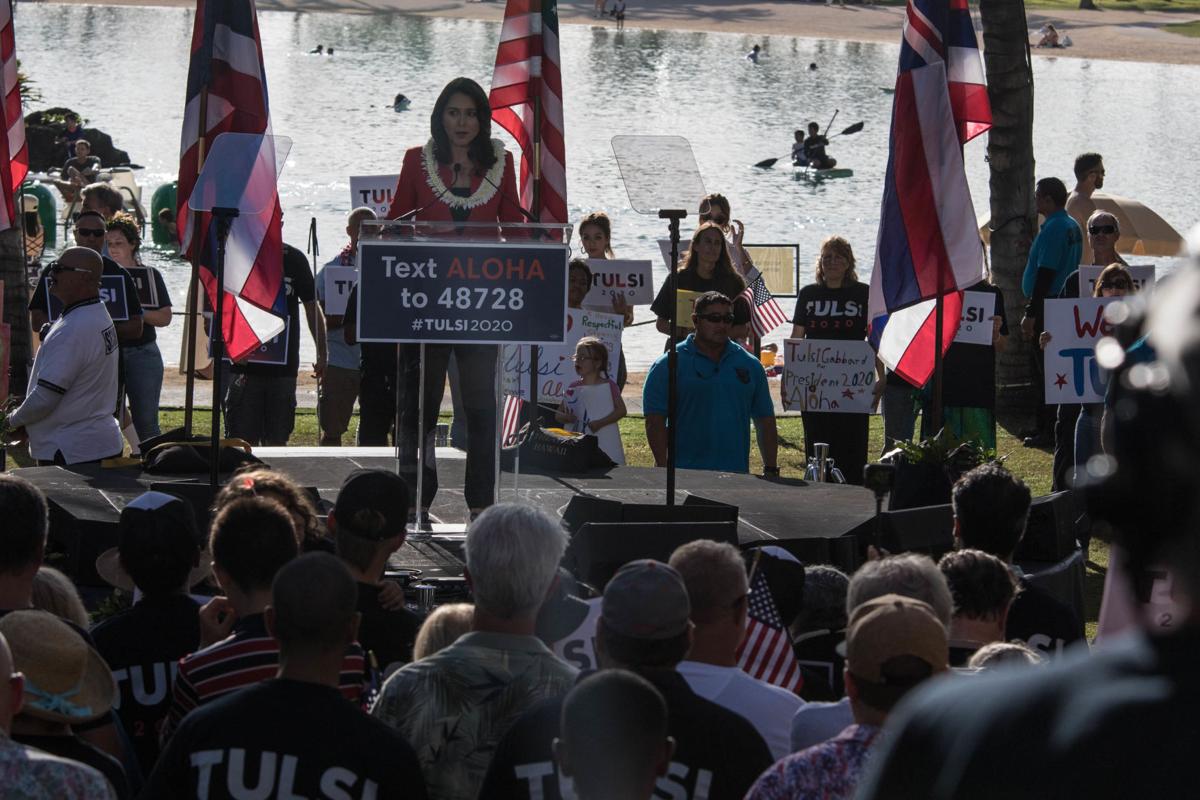 Rep. Tulsi Gabbard kicked off her presidential campaign with a rally at an event on the great lawn of the Hilton Hawaiian Village in Waikiki on Feb. 2.

Rep. Tulsi Gabbard officially kicked off her presidential campaign with a rally at an event on the great lawn of the Hilton Hawaiian Village in Waikiki on Feb. 2.

Rep. Tulsi Gabbard kicked off her presidential campaign with a rally at an event on the great lawn of the Hilton Hawaiian Village in Waikiki on Feb. 2.

There is a famous quote by Howard Zinn, a renowned historian, that says, “You can’t be neutral on a moving train.” As explained by the Huffpost, you cannot ride a train, then claim not to know how you got to your destination. You’re either on board or not; there’s no neutrality.

This quote came to mind when I heard about President Donald Trump’s impeachment, particularly about Tulsi Gabbard’s “vote” on it. Voting “present” is abstaining from choosing sides, electing neutrality in a situation.

If Zinn was right, being neutral is not an option.

By voting neutral, you do not only abstain from supporting a particular side - you will most likely strengthen the oppressor.

To better understand why, it is essential to look at what impeachment is, the motivations behind it, and Tulsi Gabbard’s goals and background. Finally, a look at what her vote represents is vital: both for Hawai’i and the country as a whole.

Impeachment: What it is and accusations against Trump

According to an article by the BBC, impeachment is, in a nutshell, bringing charges in Congress to form the basis for a trial. The Constitution states that a president “shall be removed from office on impeachment for, and conviction of, treason, bribery, or other high crimes or misdemeanors.”

This political process happens in two stages. The first stage, which the House of Representatives has already completed in Trump’s case, is bringing charges to them. Then, the House must pass a vote along party lines. On Wednesday, the House voted to approve both charges of impeachment against Trump: obstruction of Congress and abuse of power.

Trump is the third president in U.S. history to be impeached.

The second stage, which has not happened yet, consists of going to the Senate and holding a trial. During this stage, a two-thirds majority is necessary to proceed with the president’s removal, which has never happened in U.S. history.

Why exactly are people seeking to impeach Trump, though?

All the charges relate to whether he inappropriately sought help from Ukraine for his 2020 re-election; more specifically, if he pressured them to find information on Joe Biden, one of his Democratic opponents.

An intelligence official wrote a formal complaint expressing his preoccupation with Donald Trump’s call with President Volodymyr Zelensky. This started off the impeachment process. A rough transcript reveals how Trump urged Zelensky to investigate distrusted allegations against Joe Biden and his son, Hunter.

There is a figure that has particularly stood out when it comes to Donald Trump’s impeachment: Tulsi Gabbard.

She is a representative for Hawai’i and is also running for U.S. president as a Democratic candidate for 2020.

Gabbard is also the only House of Representatives’ member to vote “present” on impeachment.

She also noted that removing the president from office must be a decision “in the hands of voters.” She strongly believes in her vote, claiming to take “a stand for the center” as well as for democracy.

“Our country is torn apart. This impeachment process has only further divided an already divided country,” Gabbard said.

Still, even when abstaining from voting, she took a stand against Trump during an interview.

What her vote means

Her vote has caused a lot of controversies. Democrats see her move as cowardly and out of touch with what the party represents.

This response comes as no surprise. People elect their leaders, and having a voice is the basis for democracy. This ideal works through representatives and a set system. To state that she is “confident that the American people will decide to deliver a resounding rebuke of President Trump’s innumerable improprieties and abuses. And they will express that judgment at the ballot box” is entirely out of touch with reality and the system she’s supposed to be representing.

This position in one of the most critical votes in the country’s history is simply unacceptable.

By doing this, Gabbard has demonstrated she is unfit for leadership. How are you supposed to lead people in the right direction when you refuse to take a stance? Her opinion during an interview means nothing when she held the power to vote for change and decided to let that go.

When it comes to politics, it is essential to understand there is no real neutrality. When something is wrong, active fighting is required. What Gabbard seems not to understand is that she was elected to be the voice of Hawaii in this matter. By choosing not to vote, it is almost a mockery to claim the power should go to the people, when she is taking it away from them herself.

To vote for or against impeachment would not have caused more profound division in the country either. Neutrality does not unify; it avoids conflict. It is the political equivalent of repressing your feelings: they will eventually come out somehow, and it might not be in the best way. A responsible leader would take a stance. They would make this decision with the people’s best interests and wishes in mind. That is what being a leader means, and people who would rather sit back and watch things happen are not fit for positions of power.

Confronting the elephant in the room

Trump’s impeachment has completed the first phase with success. However, this never would have been achieved if people had refused to take a stance, such as Gabbard. Her job was to take a position, and she refused to do what she was there to do. She used unsustainable arguments, which only seemed to show a lack of competency to represent the Democratic Party and what it stands for.

By voting neutral, you do not abstain from supporting a particular side, as neutrality will most likely strengthen the oppressor. To have an opinion is always needed to make change happen. When those who are supposed to voice ours when it matters fail, it is up to the people to make themselves heard.

My name is Johanna Leo and I was born and raised in Mexico City. I just moved to Hawai'i a year ago for college, so I’m currently a sophomore at UH Manoa. I am an English and Political Science major, minoring in Psychology.