You are the owner of this article.
Edit Article Add New Article
HOME
BASKETBALL
FOOTBALL
TENNIS
VOLLEYBALL
WATER POLO
OTHER SPORTS
1 of 7 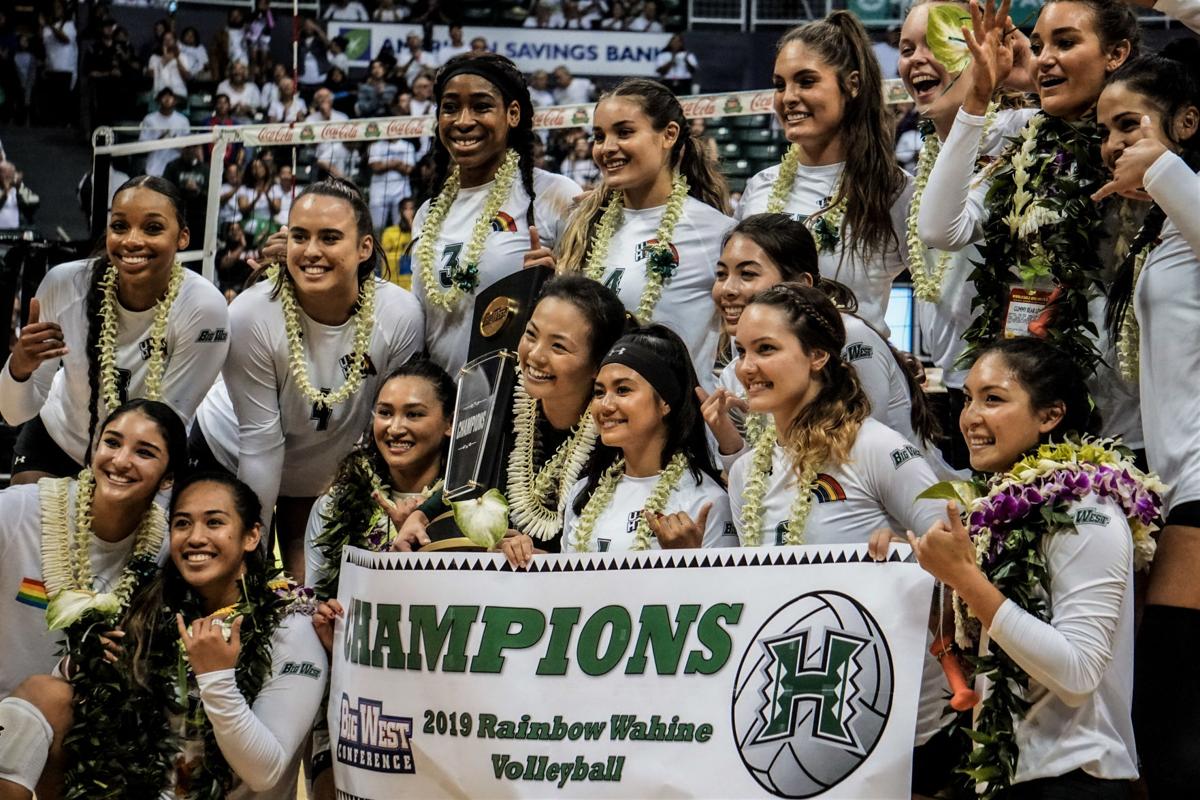 The Rainbow Wahine took sole possession of the Big West Conference title with a sweep of LBSU at the Stan Sheriff Center. 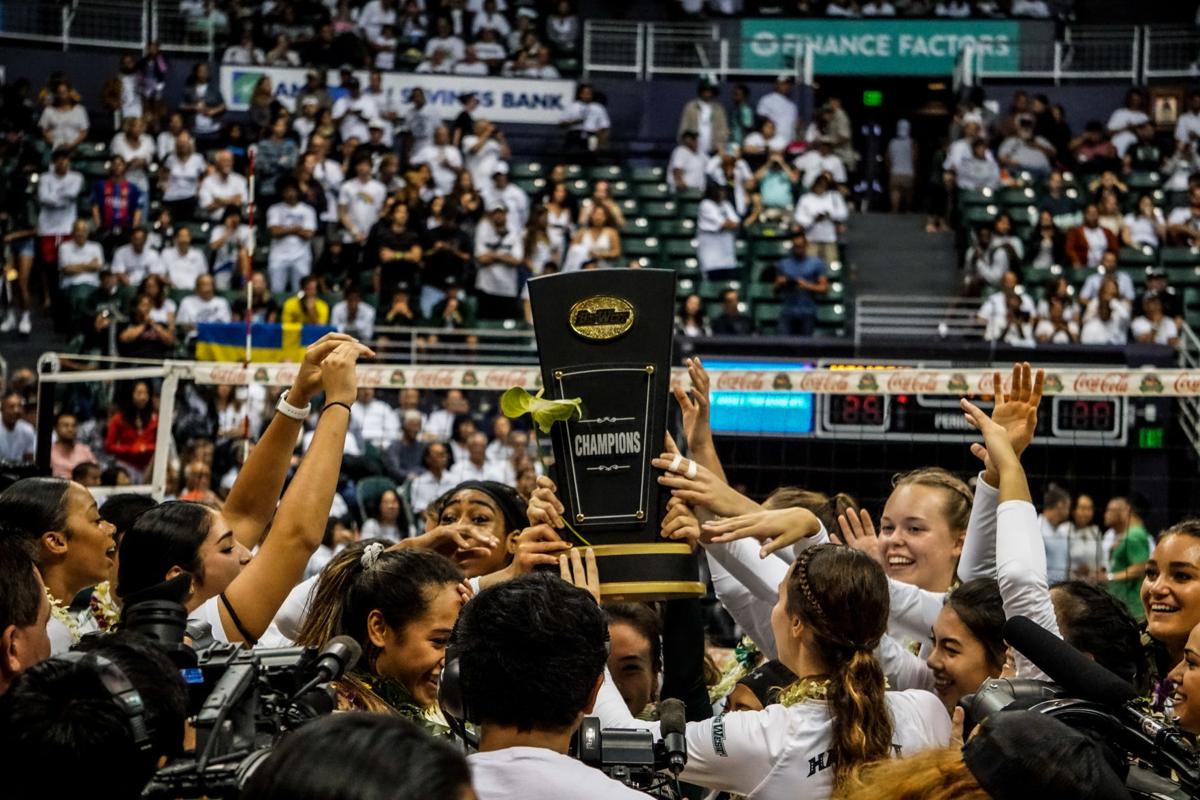 The Rainbow Wahine lifted the Big West Conference trophy for the first time since 2016. 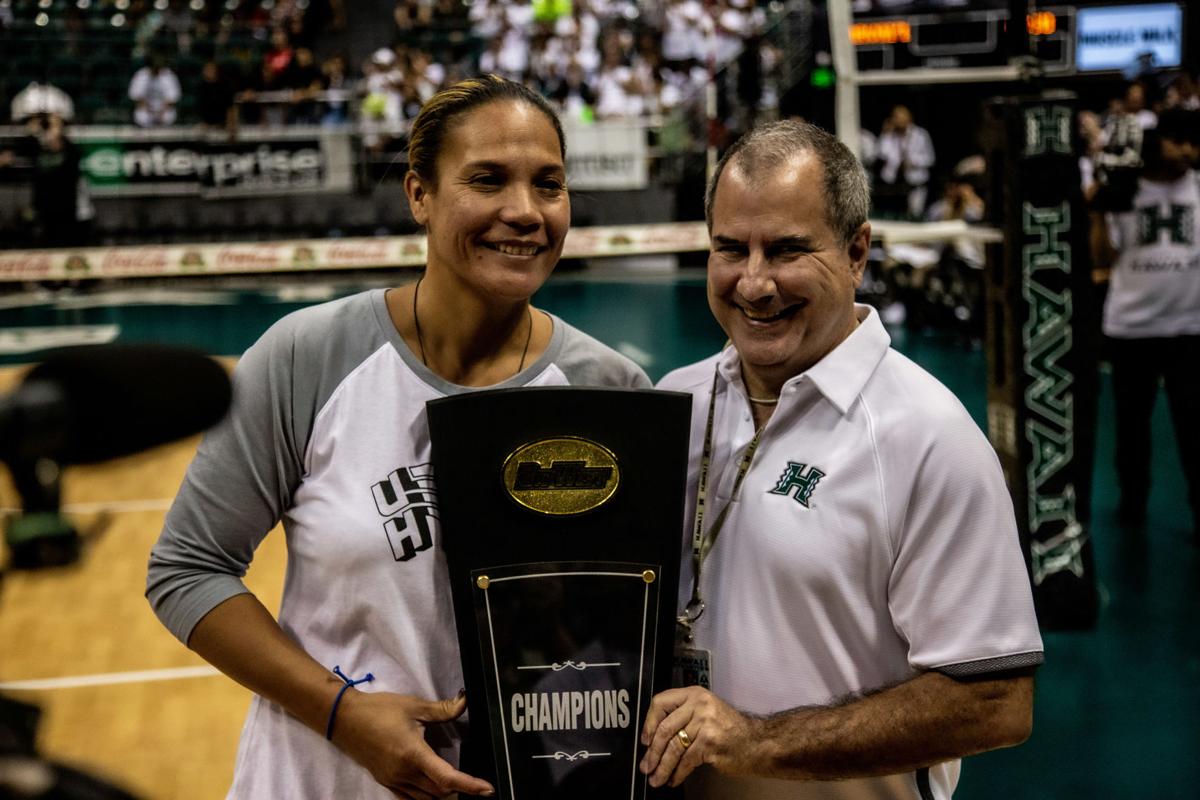 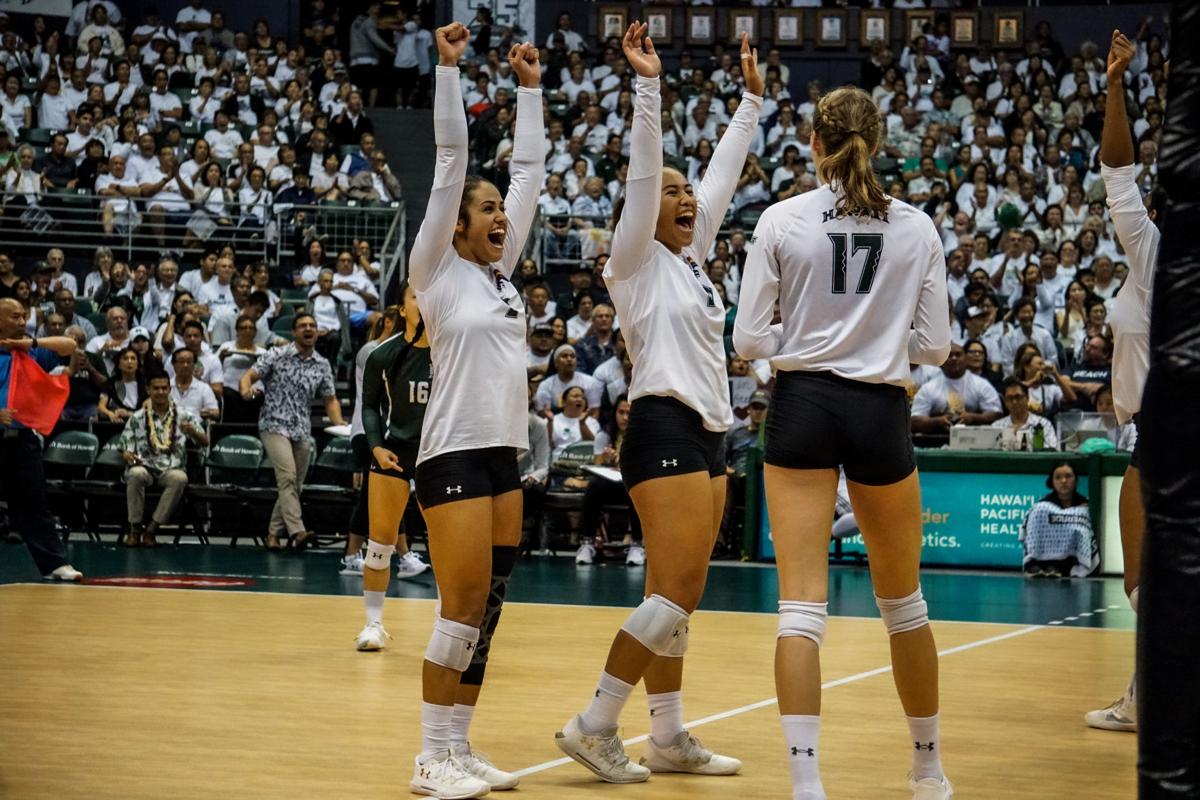 Hawai'i raised the roof for the sold-out crowd at the Stan Sheriff Center. 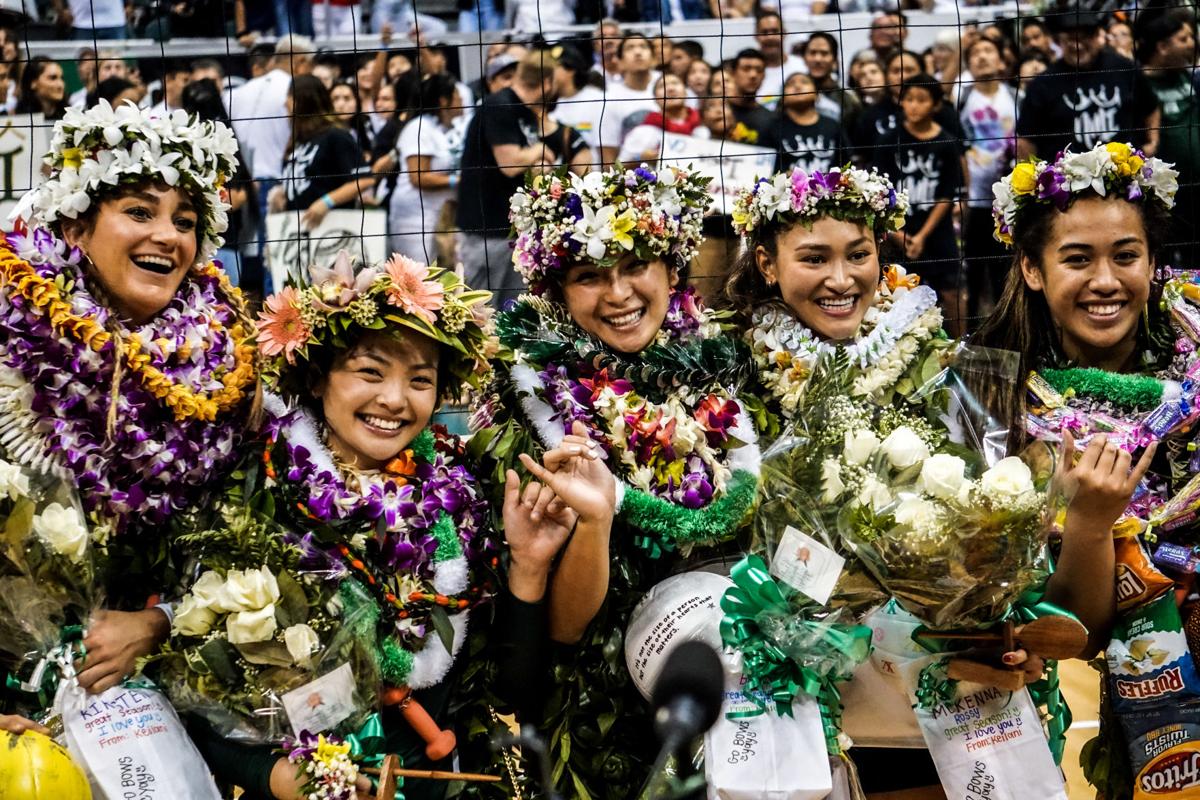 Smiles all around for the Wahine seniors! 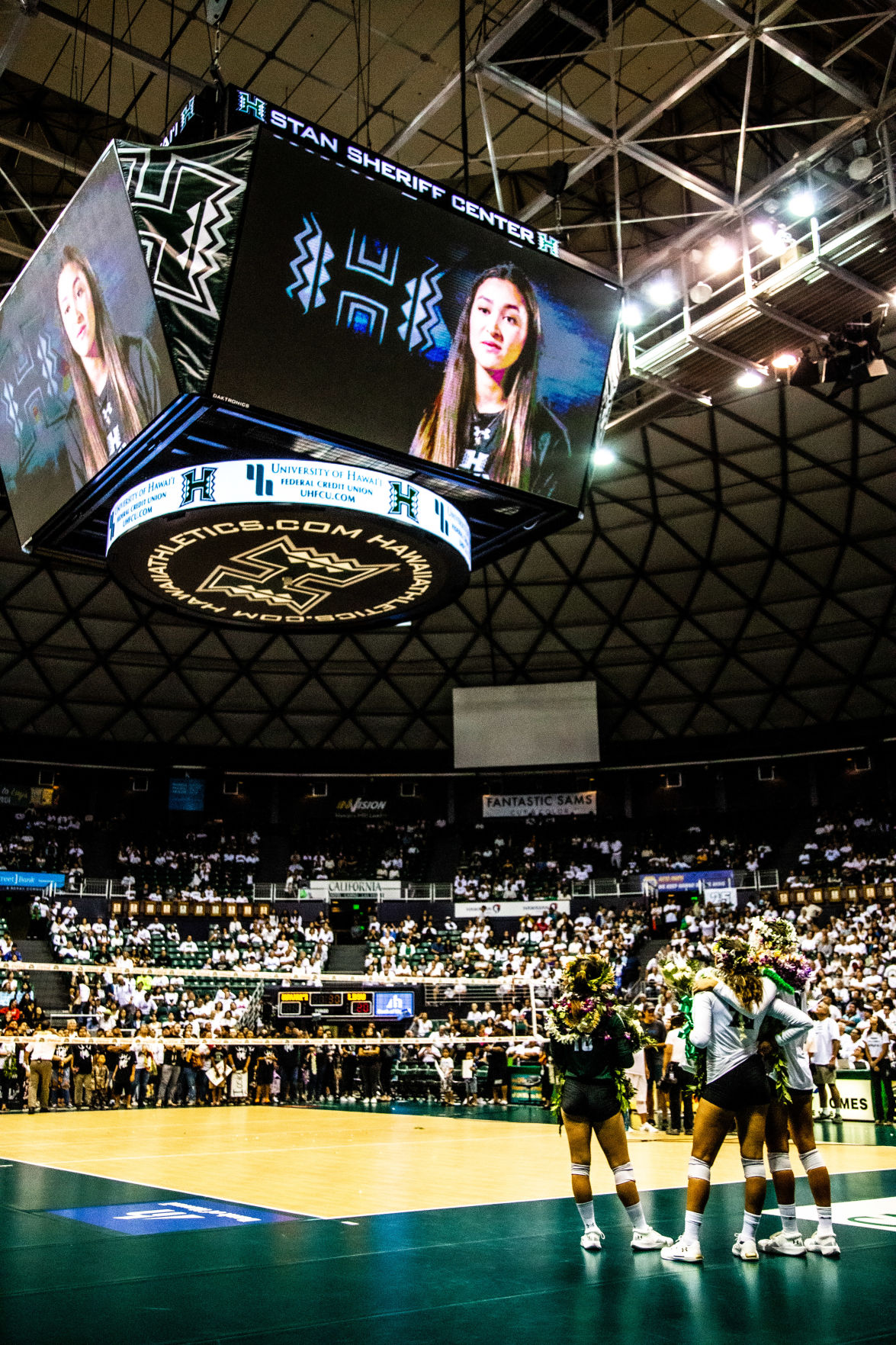 The Wahine seniors reflect on their UH journeys. 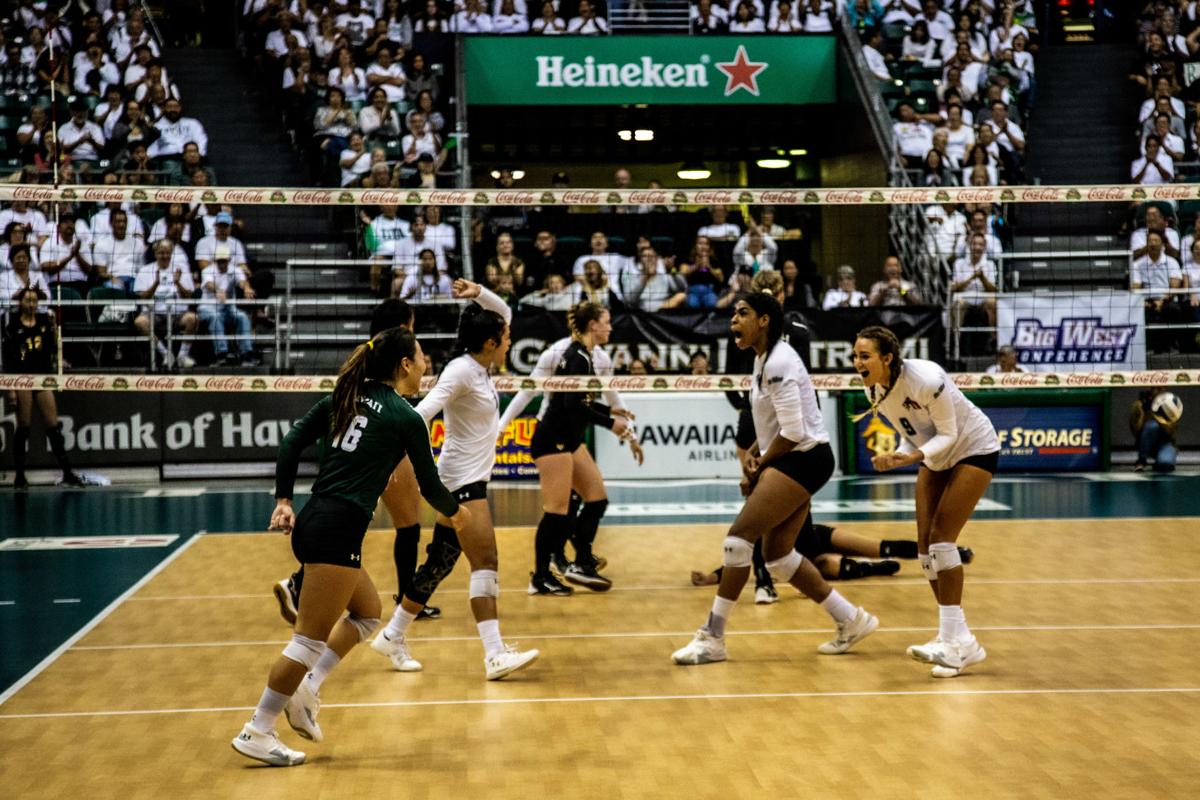 The University of Hawai‘i women’s volleyball team sent its seniors off in style. In front of a sold-out Stan Sheriff Center crowd on Senior Night, the Rainbow Wahine (24-3, 14-2 Big West Conference) took down the Long Beach State 49ers in straight sets to claim sole possession of the Big West title. The title is the first in head coach Robyn Ah Mow’s time at the helm, and the first since 2016, when the current senior class (setters Norene Iosia and Bailey Choy, libero Rika Okino, outside hitters McKenna Ross and Kirsten Sibley) were freshmen.

"We're conference champs!" Redshirt junior (graduating) libero Rika Okino said. "It feels so good. Its a goal we've been working toward since August, even last year. We had our minds set on it. I'm just glad we could execute."

I do not regret my decision at all," Choy said of her senior season. "I'm so happy that I came back home. This experience has been unforgettable, and I would not want to spend my senior year anywhere else."

Senior Night traditionally represents an athlete’s final game at their home venue. That might not be the case for these Rainbow Wahine. With the win over LBSU, especially a sweep, the Wahine’s chances of hosting the first two rounds of the NCAA Tournament drastically improves. With 64 teams qualifying for the tournament, several teams throughout the NCAA will host the opening rounds. Those teams are determined by the end of season RPI ranking. Traditionally, the top 16 teams on the list will receive the honor of hosting. Coming into tonight’s game, Hawai‘i was ranked 12th on the RPI ranking. The team will find out whether they will host during the selection show on Dec. 1.

"Obviously we would love to play here again," Ah Mow said. "The fans can come back, and we can have that sellout crowd. But just making it (to the NCAA Tournament) is great."

The Wahine had a big night from the service line, with 12 total team aces. Leading the way was setter Norene Iosia. The senior ace master picked up a whopping 7 service aces, giving her 42 on the season. With her seventh service ace, she moved past associate coach Angelica Ljunqvist to claim 4th place in the program rankings for the stat. She now has 134 career service aces.

"No one is happier than I am that she broke my record," Ljungqvist said. "I've been waiting for her to break it. It was about time!"

"After it happened, (coach Ljungqvist) came up to me and told me 'you passed me'" Iosia said. "I was focused on too many other things to be honest, but it was cool."

The team didn’t see a double-digit kills count from any player tonight. Instead, it saw a balanced attack where six different ‘Bows scored at least 5 kills. Senior McKenna Ross and redshirt junior Brooke Van Sickle each finished with 9 kills, while junior Skyler Williams had 7. Freshmen Hanna Hellvig and Amber Igiede each had 5, as did Iosia. Van Sickle led the team with 8 digs, with Okino not far behind with 7.

"I think any coach wishes to have that balance, not just one player scoring all the time," Ah Mow said. "That's part of the culture we are trying to create, and I'm glad they could do it."

"We believe in all our hitters," Van Sickle added. "If you look across the lineup, everyone's getting kills. That's really special. Other teams normally have one player that carries the team with 20 something kills. But for us, we all contribute as a team. It's always a team win."

The 49ers momentarily silenced the 10,000 strong of the SSC at the start of the match by stealing the opening score. A Hanna Hellvig kill in response was met with another Long Beach score. Fellow freshman Amber Igiede again tied the game with her first kill of the night. The middle blocker’s score headed a quick 3-0 run that gave Hawai‘i its first lead of the game. With the score at 9-6, Iosia picked up her first service ace of the match. The scoring outburst continued, as the Wahine picked up a 23-16 lead. LBSU used a kill and a block to stay alive, but their short-lived rally was cut short before it even began as Williams put down a kill to bring up set point. Ross responded with a service ace to end the set 25-18.

Another block once again gave Long Beach the opening score in set two. This lead didn’t last however as a 7-0 Hawai‘i run quickly turned the tide. Iosia led the way with the 6-service scoring run, in which four of her six serves went for an ace, including two back-to-back. A 5-0 Beach run briefly closed the gap, but Hawai‘i again ran away with it on five consecutive scores. There was no comeback this time around, as the Wahine finished on a 7-1 run to end the set 25-12. Like the first set, the second ended with a service ace, this time on back-to-back aces by Van Sickle. Iosia also had another service ace during the run, giving the ‘Bows 7 in the set.

Hawai‘i finally succeeded in drawing first blood to open the third set, with another Iosia service ace jumpstarting a quick 3-0 run. Long Beach State responded with a 3-0 run of their own, proving that they would not go down easily. The most tightly contest set of the match rolled along, with Hawai‘i always staying at least one step ahead. Ultimately, the 49ers never saw the lead in the set, while a 4-0 Wahine run essentially ended it. The run was capped off by junior Kyra Hanawahine’s service ace. Late in the set, LBSU put down a kill to cross the 20-point threshold for the first time in the match, but Igiede’s kill in response ended LBSU’s night 25-20.

"We've fought so hard this whole season," Hellvig said. "I'm so happy for the seniors. So proud of them. I'm super thankful that I get to play with this team."

With the win, the team moves to 24-3 overall on the season, and 14-2 in the conference. The Wahine will have to wait for a little over a week to find out where the opening rounds of the tournament will be played, but will return to the NCAA Tournament on Dec. 5.