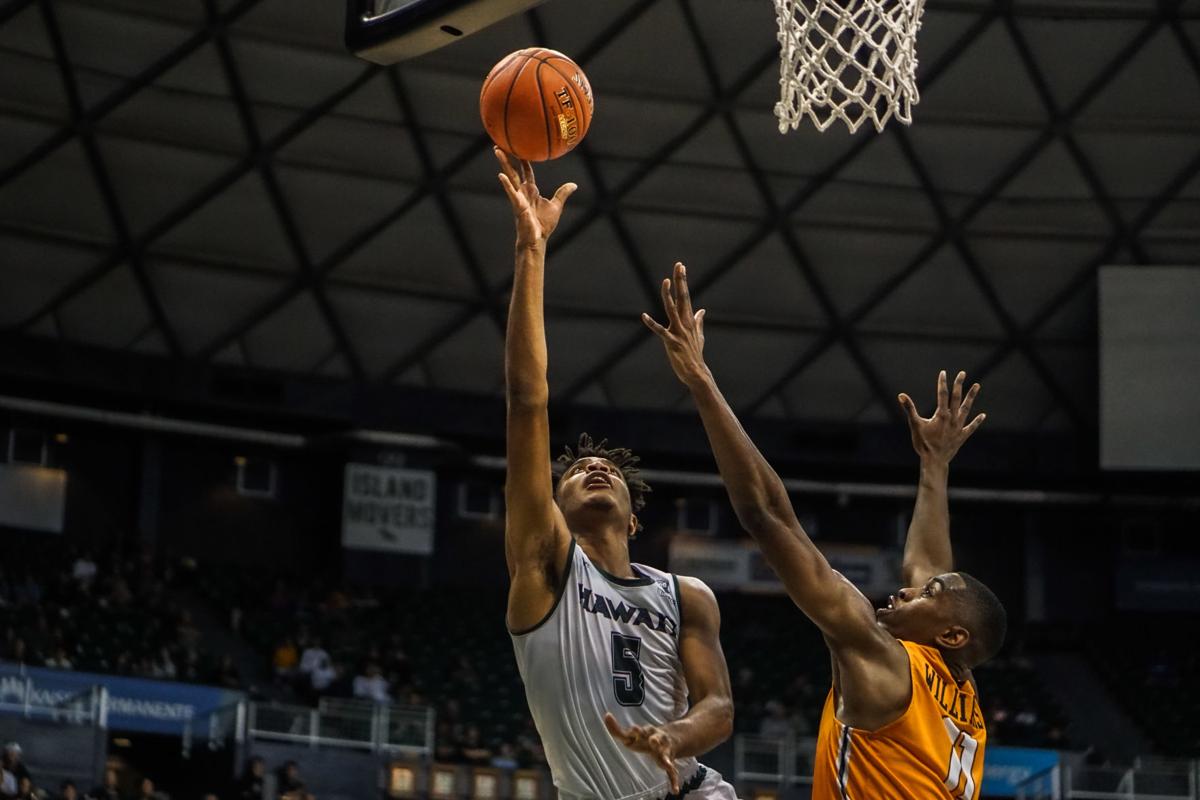 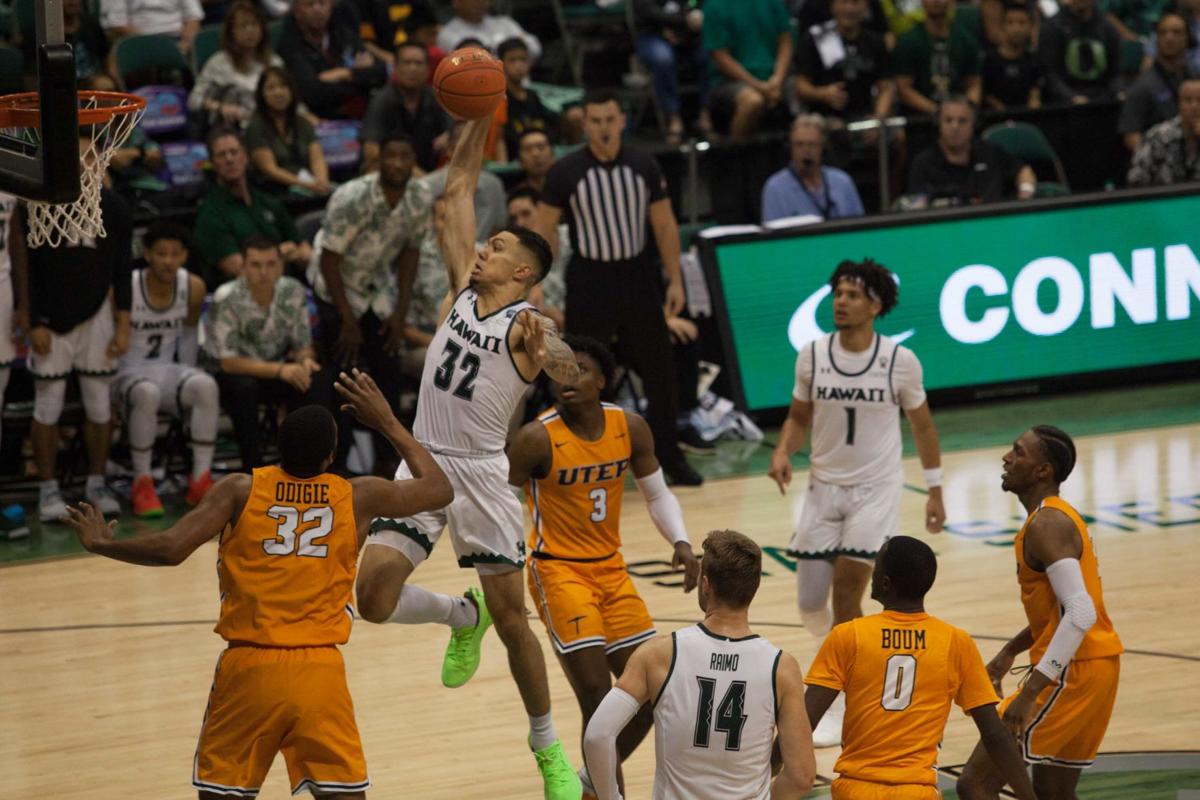 Samuta Avea (32) throws down a thunderous dunk against UTEP. 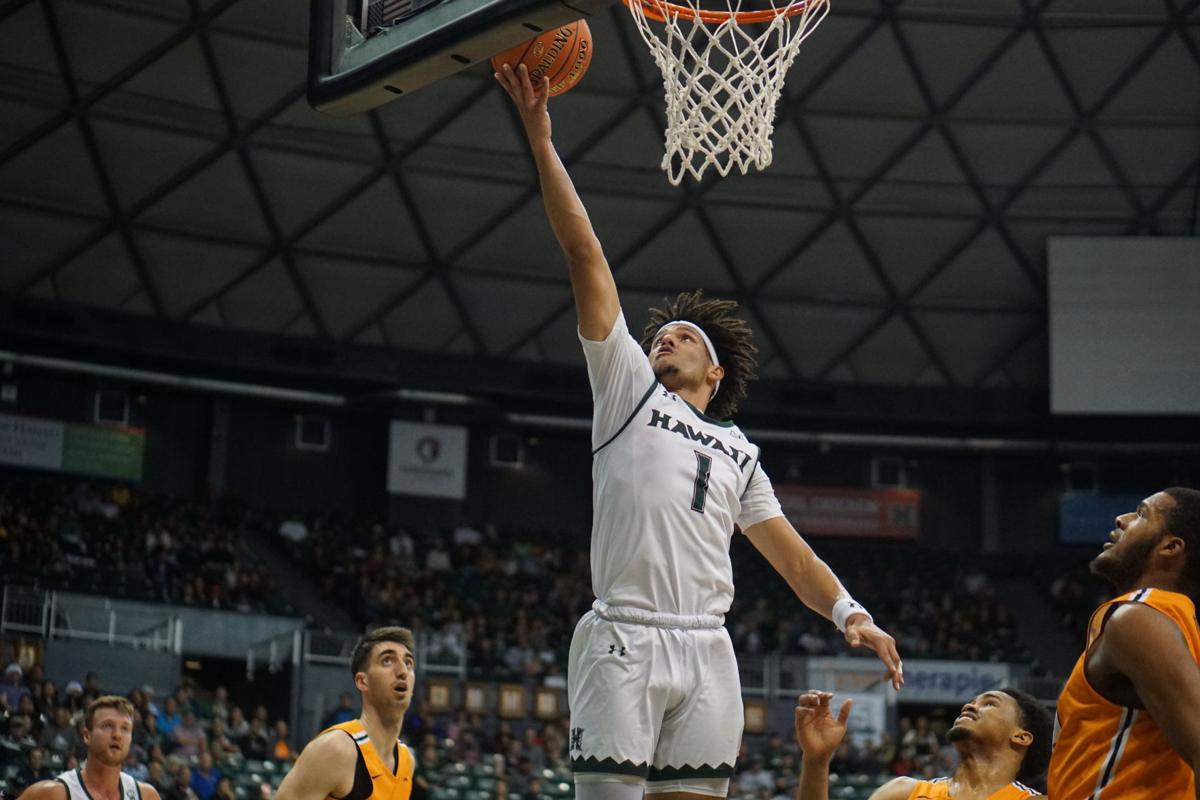 Drew Buggs (1) gave the 'Bows a 4-point lead late with an acrobatic layup that drew the SSC crowd to its feet.

The University of Hawai‘i men's basketball team pulled out a gritty 67-63 win over former WAC rival UTEP Miners. In their first meeting in 14 years, the Rainbow Warriors (8-3) triumphed in the thrilling come from behind victory.

On a night where the basket proved to be unyielding, the ‘Bows found an offensive punch from an unlikely source. Playing in his first Diamond Head Classic, freshman big Bernardo Da Silva led the team with a career-high 17 points. The Brazilian overcame a 1-8 night from the free-throw line, providing the exact athleticism and attitude the team needed. Da Silva achieved his career night with an efficient 8-9 field goal percentage, while also pulling down 5 total rebounds.

While normal offensive stalwart Eddie Stansberry had an off night from the field, junior Samuta Avea had no such problem. Picking up the slack, he fell just shy of the team lead with 16 points on 5-9 shooting. Avea was at his best when his team needed him most, scoring 9 of his 16 points in the final ten minutes, including an emphatic dunk over the watching Miners. The former Red Raider also narrowly missed out on a double-double, controlling the back board with a game-best 8 rebounds.

Meanwhile, do-it-all senior Zigmars Raimo continued to, well, do it all. Raimo finished third on the team in scoring with 9 points. His presence was felt all over the court, as he also racked up 6 assists, 5 total rebounds, and 5 steals.

Da Silva led the ‘Bows with 9 points in the opening frame, but it was another big that got the ball rolling on the game, as Raimo knocked down the opening layup with the first minute to take the early lead. The advantage quickly flipped with back-to-back UTEP layups, but Stansberry responded with a layup of his own to tie the game back up.

The sequence became the first of three lead changes within the opening ten minutes, as neither team was able to pull ahead. With two free throws from bruising big Bryson Williams, UTEP finally took control of the game. The ‘Bows wouldn’t lead again for the rest of the first half, while the Miners pushed their lead out to as much as 7 in the final minutes.

Halfway through the second, with UTEP clinging to an 8-point advantage, the tide began to turn for the ‘Bows. Avea made quick work of the deficit, knocking down a triple before slashing into the paint for a resounding slam. Another jumper from Avea made it just a one point game. Williams again pushed the lead to 3 by showing off his stroke, but the ‘Bows had smelled blood in the water. Raimo’s free throw and another Avea triple finally gave Hawai’i the lead for the first time since the nine minute mark in the opening period.

The Miners continued to show fight however, eventually retaking the lead late. A pair of Avea free throws tied the game up with two minutes to play, and Da Silva’s layup soon made it a 2-point ‘Bows advantage in the crucial final minute stretch. With that, junior point guard Drew Buggs got to work. An acrobatic double-pump layup, followed by three straight free throws, were all Hawai‘i needed to clinch the 67-63 victory.

With the win, Hawai‘i is set to make its first semifinal appearance since 2015, hosting the Washington Huskies tomorrow night at the Stan Sheriff Center at 6 p.m. HST.