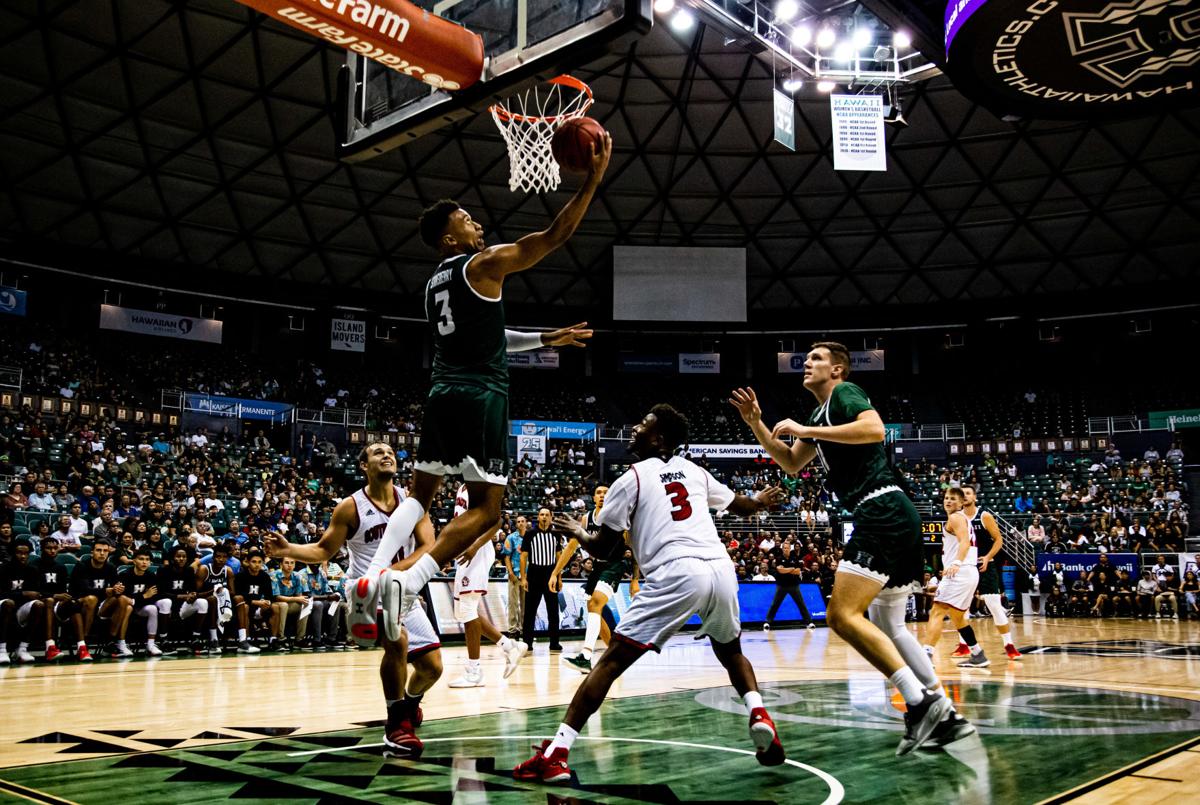 Eddie Stansberry (3) drives in a reverse layup against South Dakota at the Stan Sheriff Center. 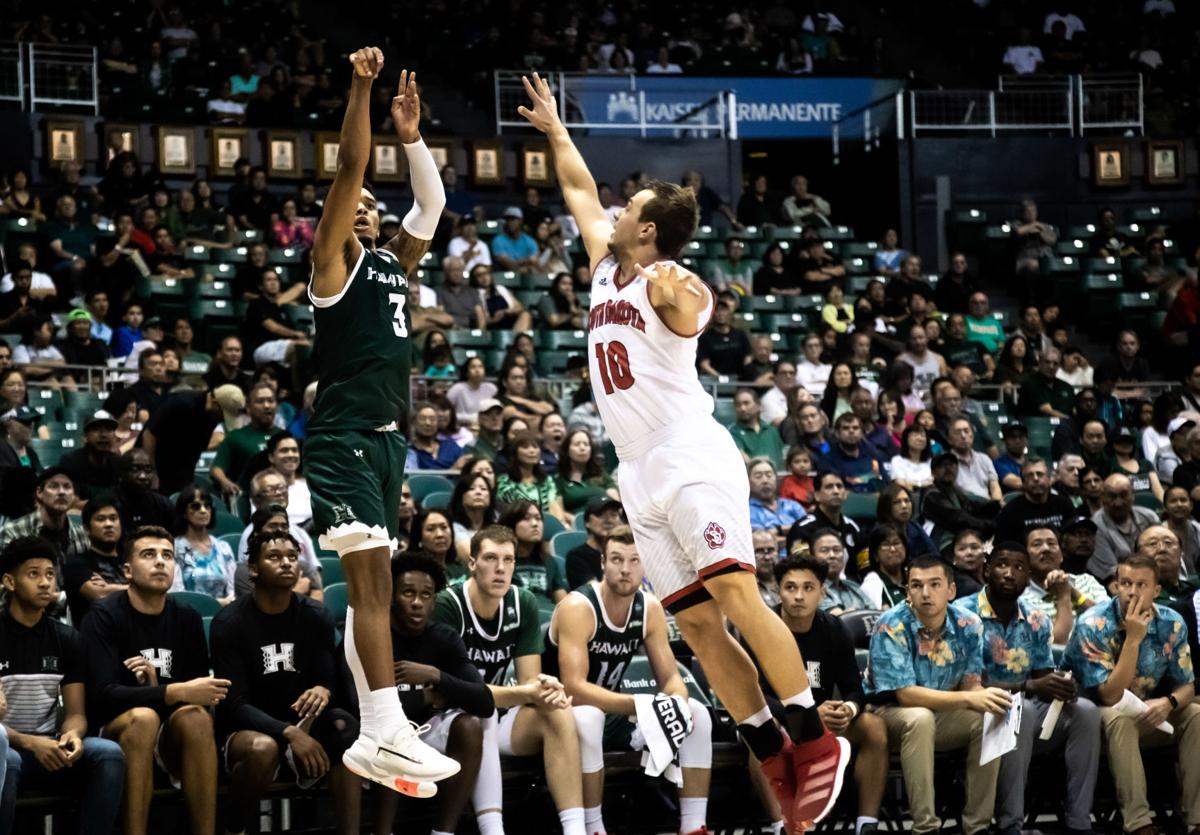 Eddie Stansberry heated up from three-point range in the second half, knocking down 3 of 6 attempts. 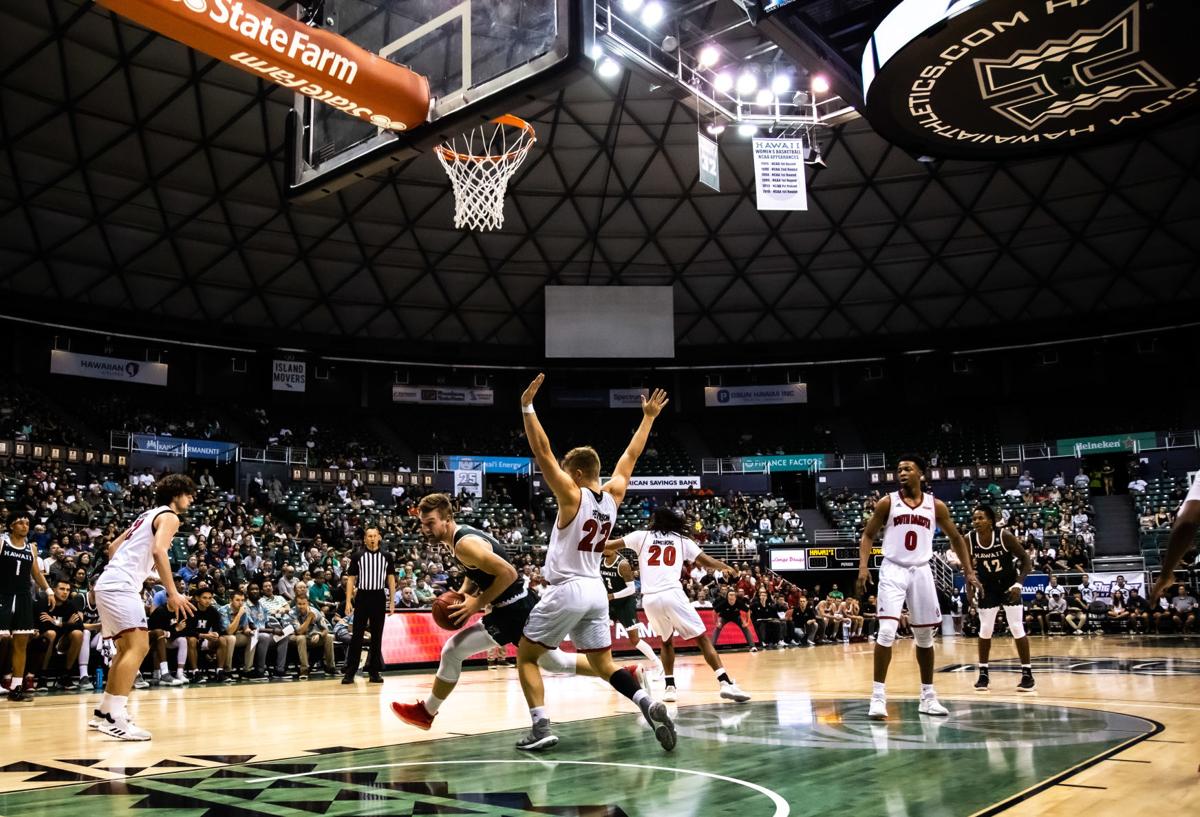 Zigmars Raimo's layup late in the game cut the deficit back down to just two.

A promising comeback by the University of Hawai‘i men’s basketball team was cut short by foul trouble down the stretch. After rallying from a double-digit deficit, the Rainbow Warriors (1-1) lost a pair of key players in forwards Samuta Avea and Zigmars Raimo down the stretch of the 81-75 loss. The junior and senior both fouled out within the final minute. Meanwhile, the Coyotes benefitted from all the fouls, as all of their points in the final two minutes came on free throw attempts.

"I have nothing but respect for the refs, and I try not to address the refereeing ," acting head coach Chris Gerlufsen said. "I just thought that at points in the game, there were some questionable calls. But that's part of college basketball."

Senior guard Eddie Stansberry again started slow, failing to register a point in the first half on just one shot attempt. He erupted in the second half however, to the tune of 21 points in the frame.

"I knew I needed a little more energy to help the guys," Stansberry said. "They were all supporting me at halftime, telling me to bring the energy I usually have, and just to go out there with the confidence I usually have. As you can see, it went better in the second half."

Stansberry’s 21 points led the team, with Avea and senior guard Drew Buggs both scoring in double-digits (Avea 14, Buggs 12). Buggs again picked up 5 assists in the matchup. Raimo fell just short of the mark, finishing with 9 points and 6 rebounds before fouling out of the game.

South Dakota came out of the gate with physical play, pushing and shoving their way to an 11-2 run to start the game. The lone UH basket during the run came in the form of a Carper layup at 19:19. The ‘Bows wouldn’t score again until the 16 minute mark.

Trailing early, Hawai‘i turned to its trusty front court to dig them out of the hole. With Carper, Avea, and sophomore forward Justin Hemsley, and Buggs all chipping in, the ‘Bows tied the game up at 13-13 with a 11-2 run.

At 11:11, Hemsley knocked down his first triple of the game to give Hawai‘i its first lead of the game 16-15. It wouldn’t last for long however, two straight Coyote buckets gave the lead back to South Dakota, before a 16-9 run pushed the lead to double digits. Freshman guard Cameron Ng made a layup at 1:17 that proved to be the final bucket of the half, but Hawai‘i limped into the locker room trailing 35-27.

A Carper layup in the opening seconds of the second half ignited a quick 6-0 run to close the gap. Buggs knocked down two free throws, before Stansberry knocked down his first jumper of the game. South Dakota responded with a prompt 4-0 run.

It became a trend, as Coyotes seemed to have an answer for every ‘Bows score, keeping them at or near a double-digit deficit range all the way up until the 7:14 mark. At 7:03, Stansberry knocked down his second triple of the game, and the rally was on. Over the next six minutes, the ‘Bows clawed their way back into the game, before a Raimo layup finally cut the Coyote lead down to two.

On the next possession, Raimo collected his fifth foul to end his night. South Dakota knocked down one of two free throws, while another UH foul led to two more as the Coyotes pushed the lead back up to five on a trio of free throws. Stansberry responded by knocking down another three-point jumper to again trim the lead.

With Avea fouling out next, the sequence repeated itself, as South Dakota knocked down freebies while the ‘Bows respond with buckets. But Hawai‘i could never find the equalizer. A Buggs skid in the paint and subsequent missed layup with seconds left on the clock proved to be the final nail in the coffin for the ‘Bows. With less than a second left in the game, the Coyotes knocked down two more free throws to push the final deficit to six.

The 81-75 loss pushes the Rainbow Warriors down to .500 on the season. The team faces a quick turnaround, as the Outrigger Resorts Rainbow Classic continues with a matchup against Pacific.