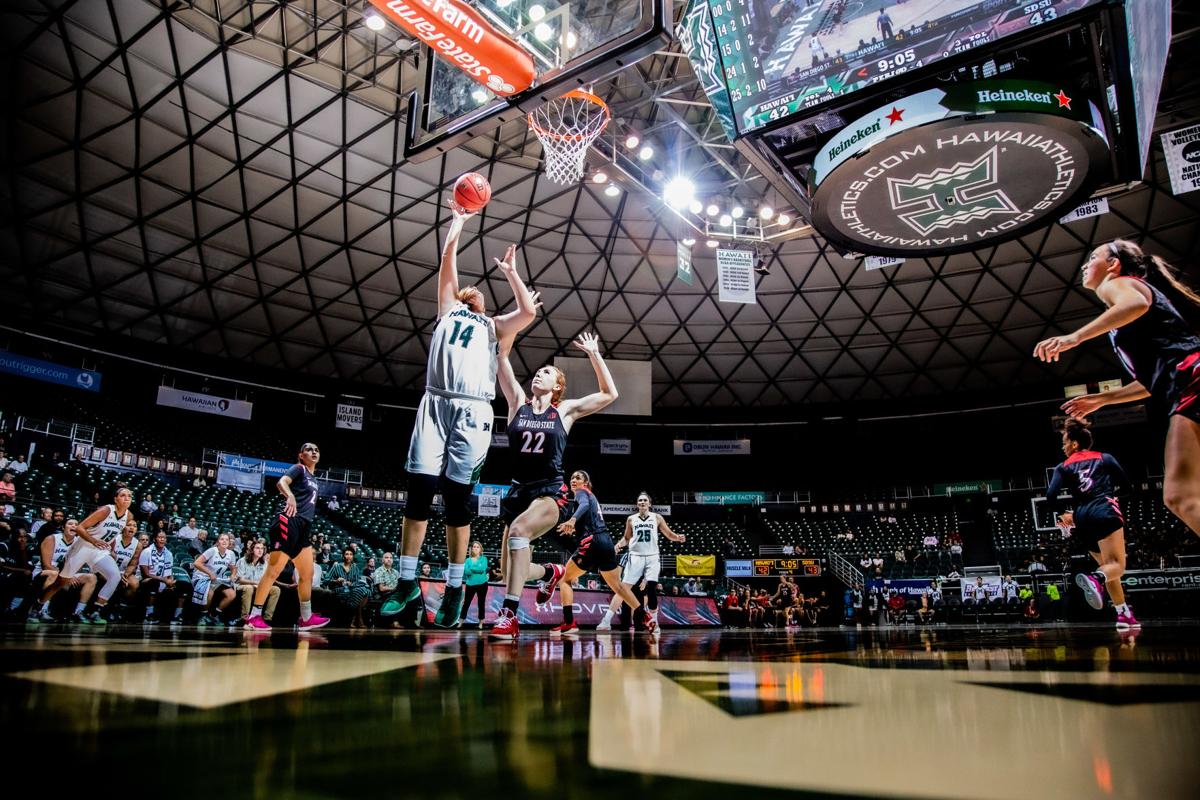 Lauren Rewers was part of a front court duo that totaled 33 points and 21 rebounds against San Diego State at the SSC.

Leaning on their front court duo, the University of Hawai‘i women’s basketball team opened the 2019-20 season with a victory over the San Diego State Aztecs. Making full use of their size advantage, 6’4 center Lauren Rewers and 6’0” forward Amy Atwell finished the game with 16 and 17 points respectively to lead the Rainbow Wahine (1-0) to a 61-58 victory.

“It’s nice to get the home opening win,” head coach Laura Beeman said. “We just kept playing. Our shots were not falling. Shooters shoot. We’re going to be a team that shoots. You can’t turn away the open shot.”

Atwell and Rewers, who's 17 and 16 points led all scorers in the match, each picked up double-doubles, making their presence felt on the board with 11 and 10 total rebounds. Those rebounding totals also led the game on either side.

“It’s real big (to control the board),” head coach Laura Beeman said. “As a coaching staff, we’ve been pulling our hair out about that. Just look at (assistant coach Alex Delanian)!”

The Rainbow Wahine started the game strong playing behind their bigs. Rewers and Atwell knocked down a layup and a three-point jumper respectively to lead the ‘Bows out to an early 5-0 advantage. Hawai‘i continued feeding the hot hand, finding Rewers for four more points, before eventually extending their lead to eight.

The Wahine advantage quickly evaporated, as a 7-0 Aztecs run to close the quarter cut the lead down to just one heading into the second.

Hawai‘i reclaimed some lost momentum to open the second half, as Atwell knocked down her second three-pointer to open the scoring. Junior center Barbara Rangel then joined in on the front court scoring party with an easy layup off of a nice feed from freshman point guard Nae Nae Calhoun.

Led by SDSU guard Mallory Adams, the Aztecs fought back to tie the game at 18 all, but couldn’t overturn the Hawai‘i as Rewers continued her hot start with a three-point bomb. Rewers later knocked down another jumper, sending her over the double digit threshold in the first half.

The two teams continued to battle, with the Wahine pulling out a slim 30-28 lead heading into halftime.

To open the second half, Aztec guard Taylor Kalmer knocked down a fast break layup to tie up the game, setting off a volley that saw the game tied three times in the opening four minutes of the third quarter.

With 3:11 in the third, San Diego State embarked on a 5-0 run to finally take their first lead of the game 42-40. They couldn’t take advantage of their newfound advantage however, as senior Julissa Tago made a layup that sent the teams into the final frame with a 42-42 tie.

The Aztecs regained the lead to begin the fourth, with a 4-2 run. SDSU added to the lead with a 7-4 volley, but the Wahine responded with a quick 5-0 run to reclaim the lead. A San Diego State layup once again tied the game at 56-56 with a minute left to play, but a clutch Atwell triple gave the ‘Bows a lead it would not relinquish. Holding a slim 59-58 lead, Atwell knocked down two free throws with seconds left to ice the season-opening win, as Aztec guard Sophia Ramos's game tying three-point jumper at the buzzer bounced off the rim.

The Rainbow Wahine head to Los Angeles, Calif. to take on Loyola Marymount at Gersten Pavilion on Nov. 13 at 5 p.m. HST.