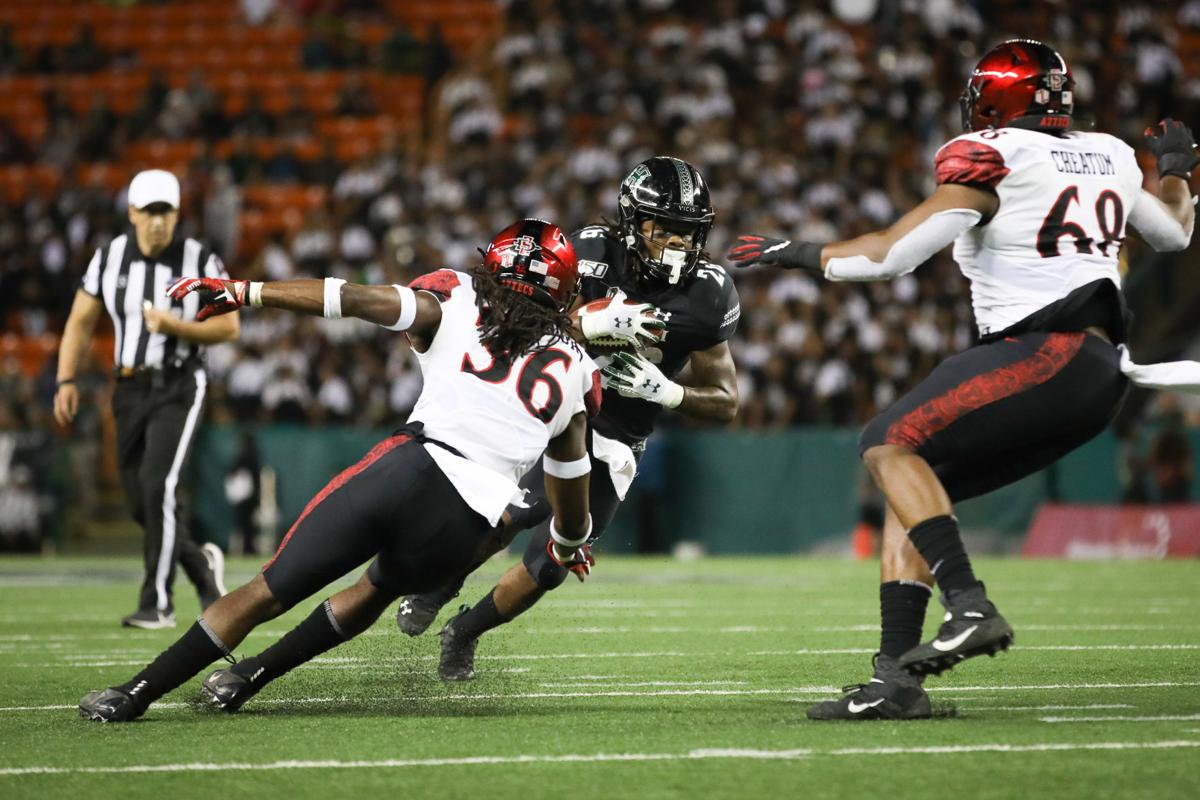 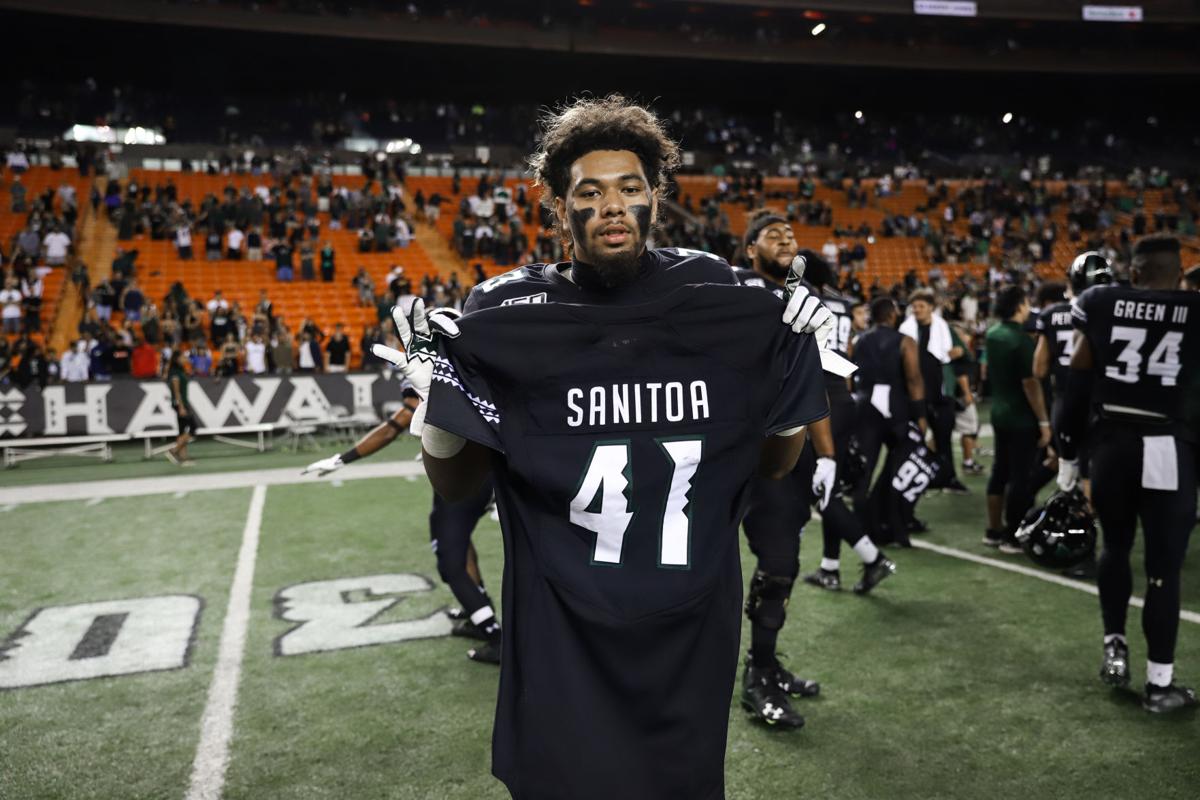 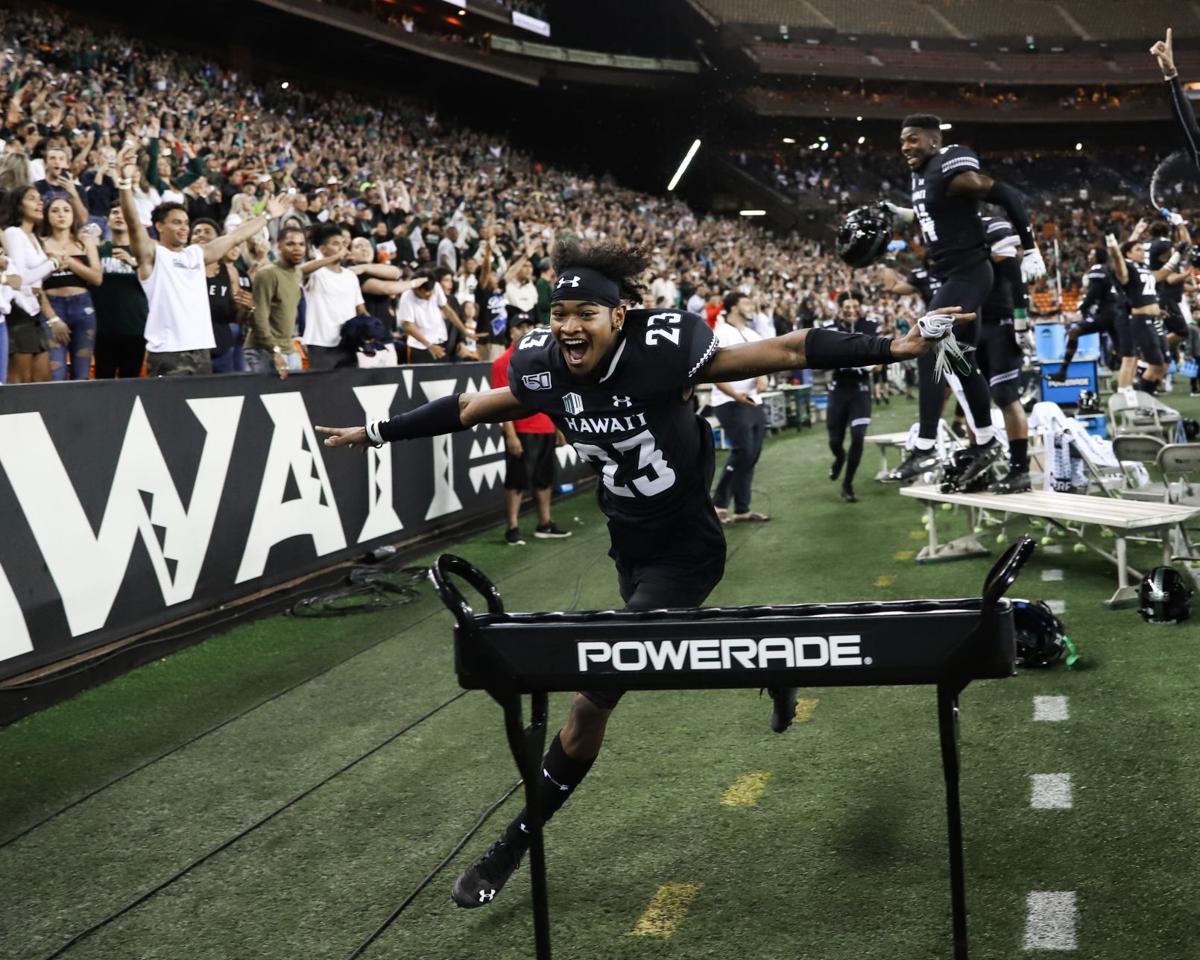 Hawai'i redshirt sophomore defensive back Akil Fransisco (23) runs down the sidelines to celebrate the Rainbow Warriors' win over San Diego State for the West Division title on Nov. 23, 2019. 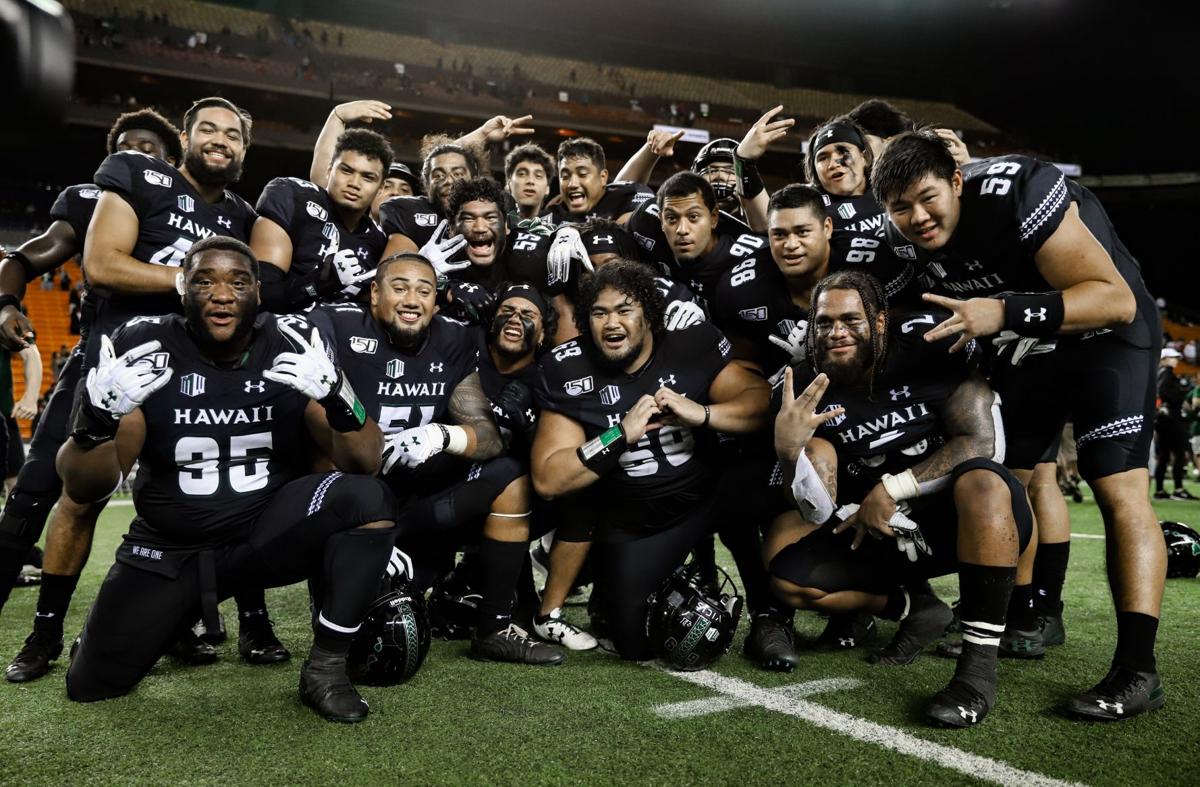 The 'Bows pose for a picture after clinching the division title.

In that regard, the University of Hawai‘i football team have certainly proven that they are worthy of the title of champion, seizing the Mountain West Conference West Division title with a 14-11 takedown of the San Diego State Aztecs at Aloha Stadium. In a season that began with heartbreak, saw critical injuries, amid declining attendance, in an aging stadium, and with quarterback controversy brewing, the Rainbow Warriors (8-4, 5-3 MWC) overcame it all to etch their name in program history.

In nearly a decade since joining the Mountain West conference in 2012, Hawai‘i had never tasted the air at the top of the peak. With the win tonight, the Rainbow Warriors will make that trip for the very first time, taking on hosts Boise State in the Mountain West Conference title game in Idaho on Dec. 7.

This Rainbow Warrior team that crossed that threshold for the very first time faced its fair share of obstacles, one of which came before fall practices were even underway. On July 5th, the university announced that linebacker Scheyenne Sanitoa had passed away. Tonight, the fallen Warrior finally made his 2019 debut at Aloha Stadium, as captains carried his jersey out to the opening kickoff.

The team also saw its fair share of injuries this season. With one captain finally making his return to the field after a season-long injury (Dayton Furuta), another one fell victim to the injury bug. For the second straight game, captain and senior defensive lineman Kaimana Padello was held out with an injury. Despite the loss, the ‘Bows defense, who had struggled to contain the run all season, held a tough Aztec running back stable to under 100 yards on the game.

Meanwhile, on the offensive side of the ball, a quiet night from the dynamic receiver duo of seniors JoJo Ward and Cedric Byrd II was masked by the steady hands of fellow senior Jason-Matthew Sharsh. From the team’s rotating quarterbacks, Sharsh saw 10 targets. He hauled in all 10, good for a game-best 95 yards and the lone receiving touchdown from either team. On the other side, receiver Jared Smart hauled in 7 catches for 82 yards, which would have also made him the game leader if not for Sharsh.

The two quarterbacks in question also each had a solid night. Redshirt junior Cole McDonald finished with 144 yards on 13-19 passing, while tossing the touchdown to Sharsh. He also picked up an interception, but it was a well-thrown ball that bounced off the hands of his receiver. Redshirt freshman Chevan Cordeiro also had a strong performance, finishing with 71-yards on 9-16 passing. Where he really excelled was on the ground, where he racked up a game-high 59 yards  on just 8 carries.

Cordeiro was joined on the ground by running back Miles Reed. The redshirt sophomore continued his strong stretch of play as the team’s lead back with a 13 carry 53 yard performance. Fellow back Fred Holly III finished with 29 yards and the lone UH rushing touchdown of the game.

The ‘Bows defense started the game with a strong stand that set the tone for much of the game. After winning the coin toss, Hawai‘i elected to defer. After kicking off to the Aztecs in the south endzone, the defense got to work. Despite two early first downs, the ‘Bows managed to force a punt, keeping SDSU’s potent offense off the scoreboard. With a chance to steal the opening score, the Warrior offense took the field.

In an inauspicious start to the drive, McDonald was sacked on the opening play for a loss of 4 yards. An incompletion to Byrd put the ‘Bows in a 3rd & 14 hole early. In came Sharsh to rescue the situation. McDonald found Sharsh for a 16-yard gain that reset the downs, before finding Sharsh again for another 11-yard gain. McDonald then found Smart for a big 21-yard gain, before turning things over to Reed, who picked up two first downs on the ground. A 9-yard sack threatened to derail the promising drive, but McDonald again connected with Sharsh for a 12-yard pickup, which led to the touchdown toss for Sharsh to wrap things up. The 15 play, 92-yard drive drained eight and a half minutes that sent the game into the second quarter.

The second quarter featured a defensive slug fest that saw only three points scored overall. The two teams traded punt after punt, before McDonald’s well-placed ball bounced off his receiver and into the arms of an Aztec defender for the game’s first turnover. With the field position advantage, San Diego State finally broke the second quarter stalemate on their last drive of the half. The Aztecs drove down the shortened field, before stalling out. The 27-yard SDSU field goal made it a 4-point game with just seconds left in the half. Hawai‘i, who was due to receive the second half kickoff, decided to take a knee and run out the clock.

The second half began with another defensive showcase, as both teams faced quick three and outs. This time, it was Hawai‘i who broke up the defensive battle. With Cordeiro taking over the offense, the ‘Bows drove 96 yards in 14 plays that took seven minutes off the clock. Cordeiro took matters into his own hands, picking up gains of 12, 14, 13 and 14 yards on quarterback keepers. He then handed things off to Holly, who rumbled into the end zone for an 11-yard touchdown.

On the next drive, which crossed over into the start of the fourth quarter, San Diego State drove down to the UH 5-yard line. The ‘Bows lost track of quarterback Ryan Agnew, who walked into the endzone for a touchdown. Agnew again crashed into the endzone for the two-point conversion to make it a field goal game, but was shaken up on the play.

That drive proved to be the end of the brief offensive fireworks, as the two teams again traded punts for the rest of the quarter. The final UH punt gave the Aztecs a small glimmer of hope, but the 48-yard field goal to tie the game sailed wide left…Or did it? Turns out, Rolovich had called a timeout right before the snap. Armed with one more chance, the Aztecs again stepped to the line. But ultimately, the timeout had done its trick, as kicked Matt Araiza over corrected on the second kick, sending the ball wide right and the ‘Bows to the conference title game.

Hawai‘i faces one more regular season test before taking on Boise State, as they host Army on Senior Night at Aloha Stadium on Nov. 30 at 7:30 p.m. HST.