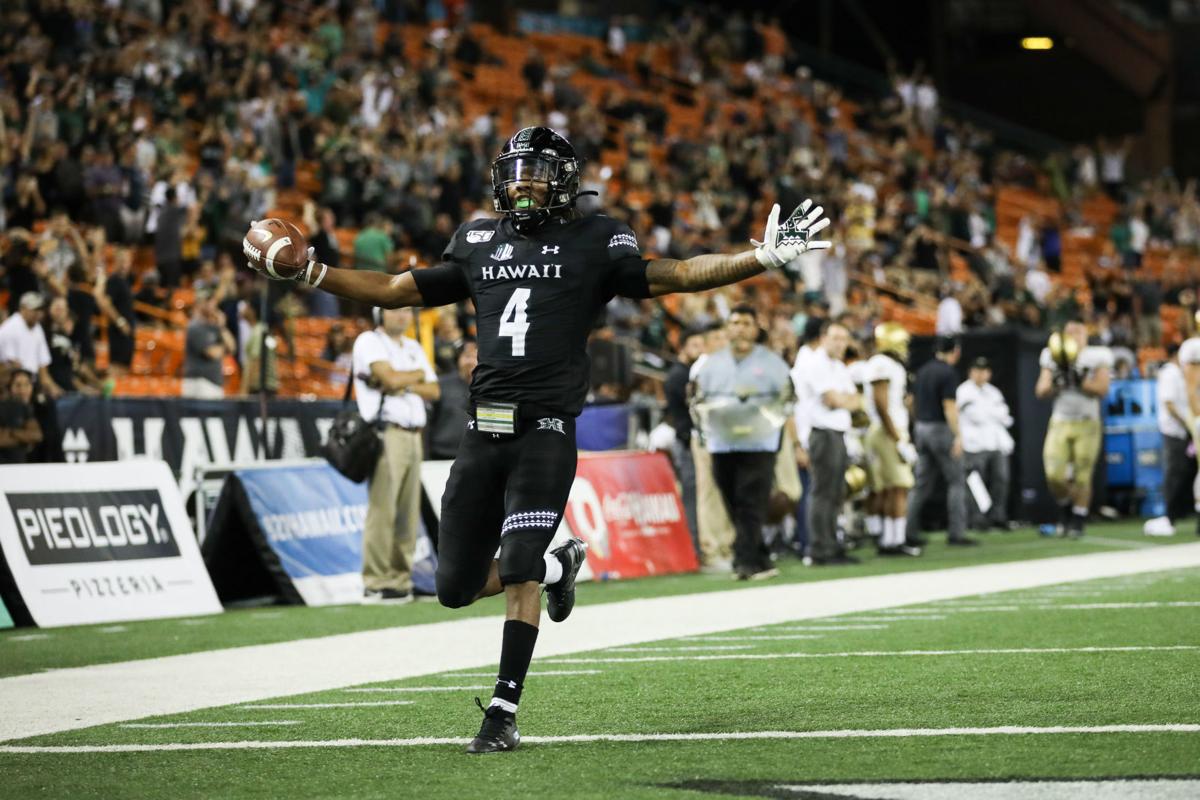 Rojesterman Farris II (4) picked off Army QB Jemel Jones, returning it 100-yards to the house to seal the 52-31 UH win over the Black Knights at Aloha Stadium. 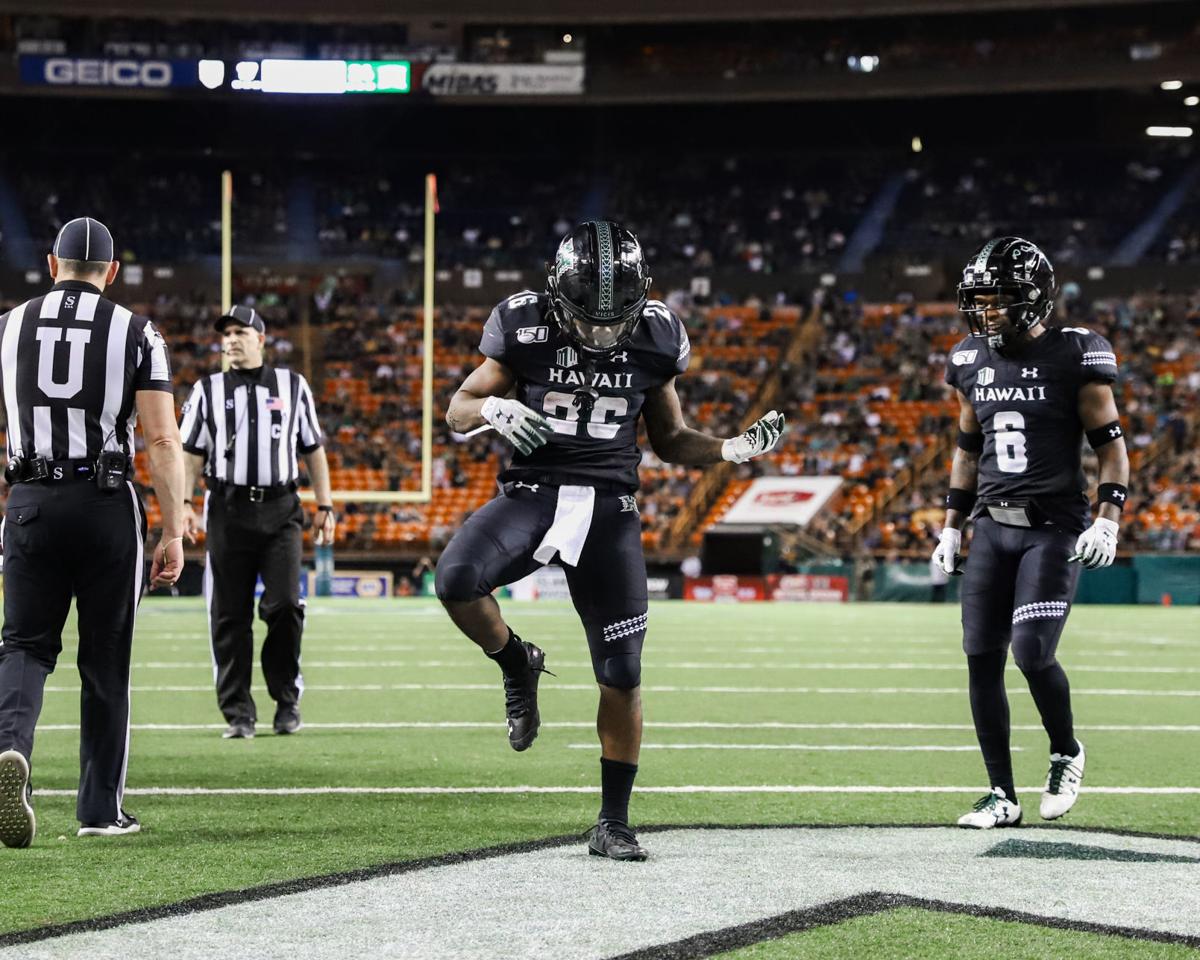 Miles Reed (26) strums his air guitar after finding the end zone on a goal line carry. 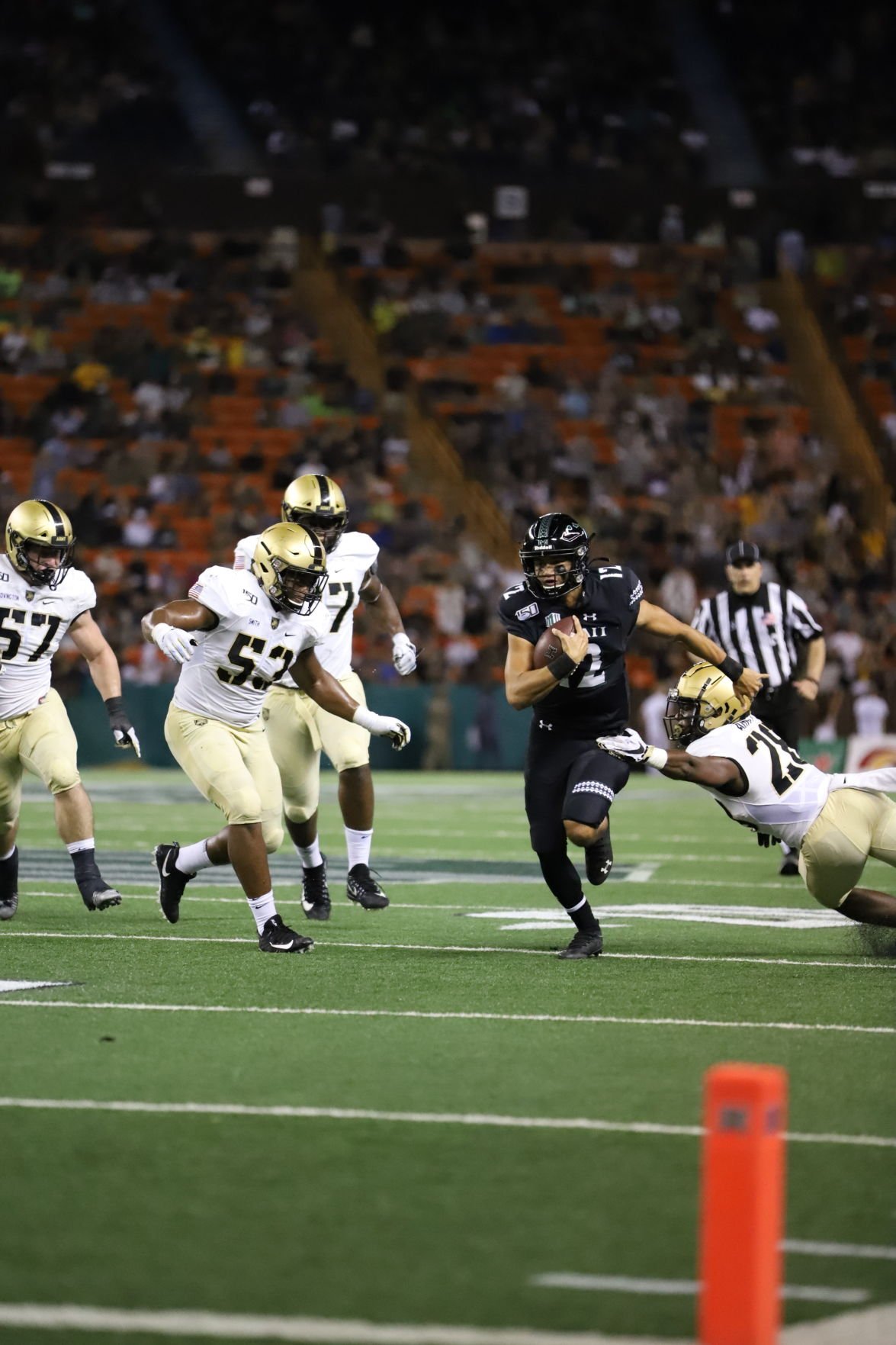 Chevan Cordeiro (12) finds a hole through the Black Knights defense on a quarterback scramble. 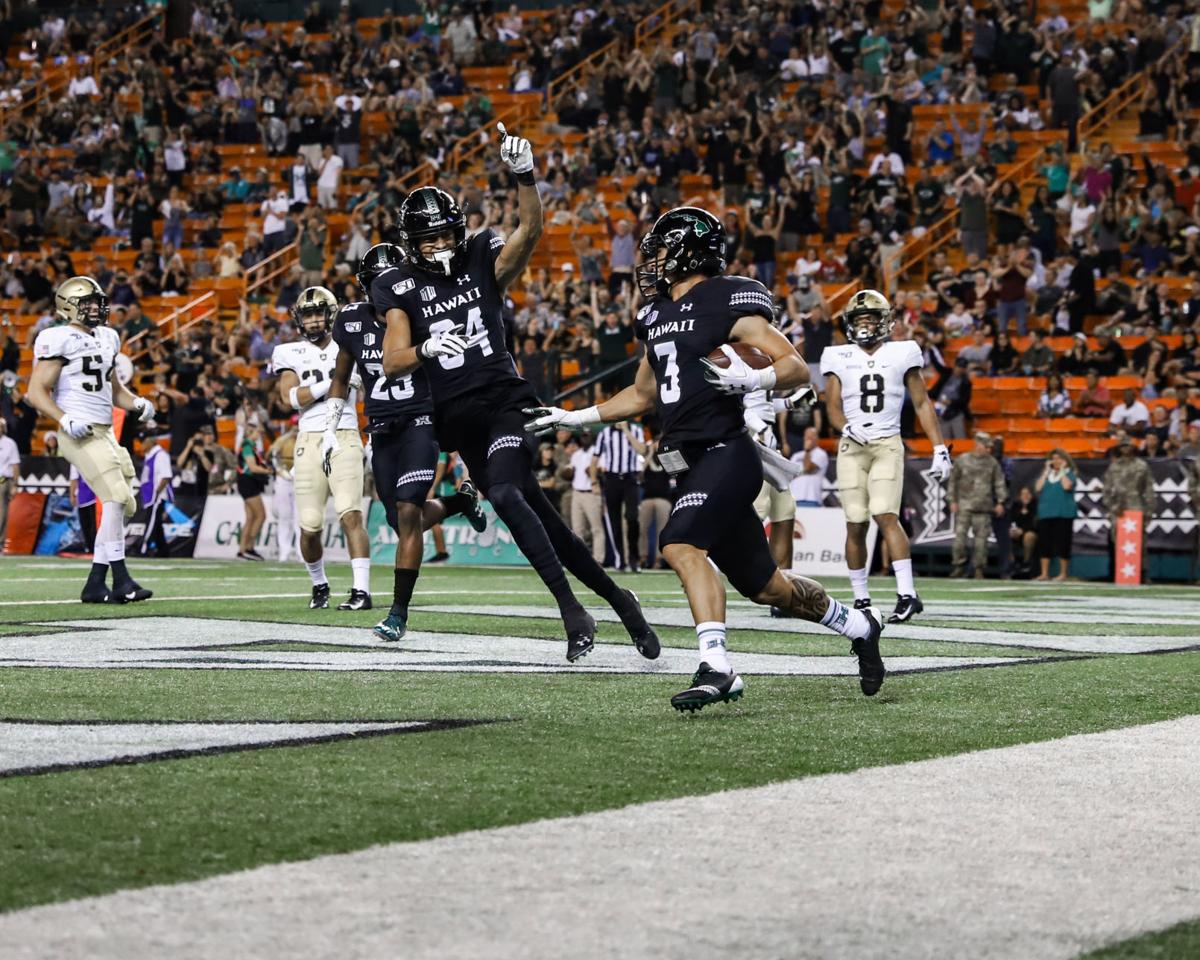 Jason-Matthew Sharsh (3) showed off the wiggle in his step on his 26-yard touchdown catch, his second of the day.

The University of Hawai‘i football team closed the book on the 2019 regular season with a drama free win over Army on Senior Night. The 52-31 Rainbow Warriors (9-4, 5-3 Big West Conference) win over the Black Knights secured a 9-win season for the ‘Bows for the first time since the 2010 season, under then-head coach Greg McMackin. That was also the last season Hawai‘i won double digit games, something this 2019 team will have a chance to rectify with the Mountain West title bout fast approaching and a bowl game not long after that.

The ‘Bows’ dynamic rotating quarterbacks had another strong performance, combining for 359 yards and 5 touchdowns without an interception. Redshirt freshman Chevan Cordeiro got the starting nod, putting up 109 yards and two touchdowns on just 12 pass attempts. Cordeiro later left the game with an injury, sending redshirt junior Cole McDonald into the game. McDonald picked up right where Cordeiro had left off, picking up 250 yards and 3 touchdowns in a little over two quarters played.

Receivers Jared Smart, Cedric Byrd II and Jason-Matthew Sharsh accounted for a large majority of those passing yards. Smart finished with 123 yards and 1 touchdown, with Byrd not far behind with 122 yards and 1 touchdown. Sharsh picked up 80 yards, while tacking on a game-best two receiving touchdowns. Although his streak of 21 consecutive starts was snapped, senior JoJo Ward, who missed the first half, also picked up a touchdown to cap off a big night for the receiving corps.

Redshirt sophomore Miles Reed continues to excel in the bell-cow role for the UH running unit. Reed saw 10 carries, rumbling for a team-best 92 yards. Reed also crashed into the end zone for a touchdown. Meanwhile, redshirt senior Dayton Furuta got the start at running back for the first time since the season opener against Arizona.

The offensive unit as a whole played a clean game. The offensive line put in a strong performance, keeping the pocket clean for whichever quarterback stood behind them. The unit gave up just one sack, which turned out to be the only QB hit of the day. Hawai‘i also went turnover free for just the second time this season (at Nevada), and the first time at Aloha Stadium.

The same could not be said for Army. The Black Knights’ trio of quarterbacks combined to toss 2 interceptions, the second of which was returned 100-yards to the house by redshirt senior Rojesterman Farris II to ice the game. Farris’s pick-six set a new record for the ‘Bows as the program’s first 100-yard return. The previous record was held by Richard Torres, who returned one for 99-yards against Washington in 2011. The other pick came at the hands of fellow redshirt senior Solomon Mautautia. The linebacker picked off Army starting QB Kelvin Hopkins in the second quarter, before Hopkins left the game with an injury.

Renowned for their RPO offense, Army caught Hawai‘i off guard on the first offensive play of the game when QB Kelvin Hopkins Jr. found his receiver for a 69-yard completion to set up the Black Knights in the red zone. The completion accounted for more than half of Army’s passing yards in the game. Just three plays later, the Black Knights found themselves on the scoreboard first after a 3-yard rushing touchdown.

Cordeiro led the ‘Bows out the gates with three straight completions to Byrd, including a 20-yard connection. Reed picked up 23 yards for another first down, but the drive ultimately stalled on the 24-yard line. Redshirt senior Ryan Meskell connected on the 42-yard field goal, his first attempt in the last four games. Army later matched the UH field goal on their next drive to push their lead back out to seven.

Trailing by a touchdown, the tide began to turn for the Rainbow Warriors. Freshman Lincoln Victor’s 37-yard kickoff return set the ‘Bows up in good field position, and foreshadowed what was to come. Reed followed that up with a 30-yard rumble down to the Army 26-yard line, before Cordeiro found Sharsh for a 26-yard touchdown completion. The 56-yard drive took just two plays, lasting for less than a minute.

On the other side, the RPO continued to wreak havoc on Hawai‘i. After an 8-play drive consisting only of rushing plays, Army again found the endzone to push out to another touchdown advantage. The ‘Bows were unable to respond in kind, as a 1-yard rush on 3rd & 6 forced the first punt of the game on either side. The Black Knights were unable to add to their lead however, as Hopkins Jr.’s pass was intercepted by Matautia, who returned it to the Army 25-yard line. Not to be outdone, the ‘Bows offense responded with a quick 1-play score, as Cordeiro found Byrd for a 25-yard touchdown.

Later in the half, a questionable 4th down attempt by Army gave the ‘Bows good starting field position and a chance to take their first lead of the game. Cordeiro drove Hawai‘i down the field, finding Smart for a 23-yard completion, before taking the ball deep into the red zone himself on a quarterback keeper. However, Cordeiro was hurt on the scramble, sending McDonald trotting out from the sideline. After a Furuta carry to the 4-yard line, McDonald finished what Cordeiro had started, finding Sharsh for his second receiving touchdown of the game as Hawai’i went up 24-17.

The third quarter featured a firework show that saw a touchdown scored on every full possession by either team. Hawai‘i got the party started with a 76-yard touchdown drive. McDonald found Sharsh, Smart, and Byrd for completions of 27, 14, and 16 yards respectively. Reed joined the first-down gold rush with an 18-yard carry, before taking it into the endzone from a yard out. A 4-play Army scoring drive was met by another McDonald touchdown completion, this time to Ward from 7-yards out. The Black Knights would go on to score again, sending the game into the final quarter with the ‘Bows leading 38-31.

The offensive display promptly ended to begin the final period. After trading punts to start the quarter, Army decided to go for a fourth down conversion with 5 yards to go. The pass fell incomplete, setting the ‘Bows up for the only offensive score of the quarter as McDonald found Smart for a 20-yard touchdown. On the next drive, down two scores, Army was forced to make another quarterback change after Christian Anderson suffered an apparent hip injury. Freshman Jemel Jones was thrust into the lineup, promptly shaking up the offense. Jones found his receiver down the field for a 32-yard completion, the longest for the Black Knights since the opening play. There would be no fairy tale ending however, as Jones tossed the goal line interception to Farris, who returned it 100-yards for the touchdown to seal the Hawai‘i win.

With the regular season in the books, the Rainbow Warriors turn their attention to the Mountain West Championship game. The ‘Bows will travel to Idaho to take on Boise State at Albertsons Stadium on Dec. 7 at 11 a.m. HST.