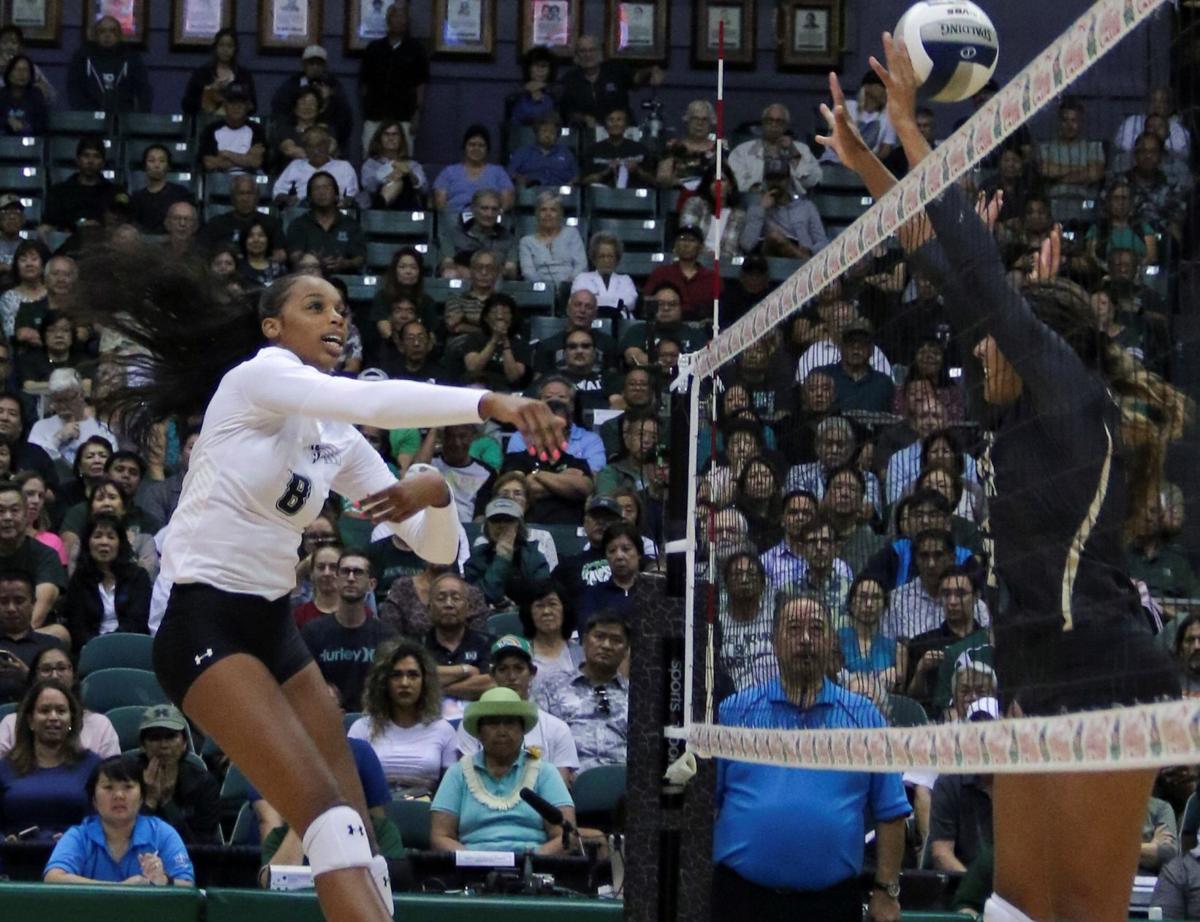 Skyler Williams puts down a kill over two Black Knight defenders at the Stan Sheriff Center on Sep. 5 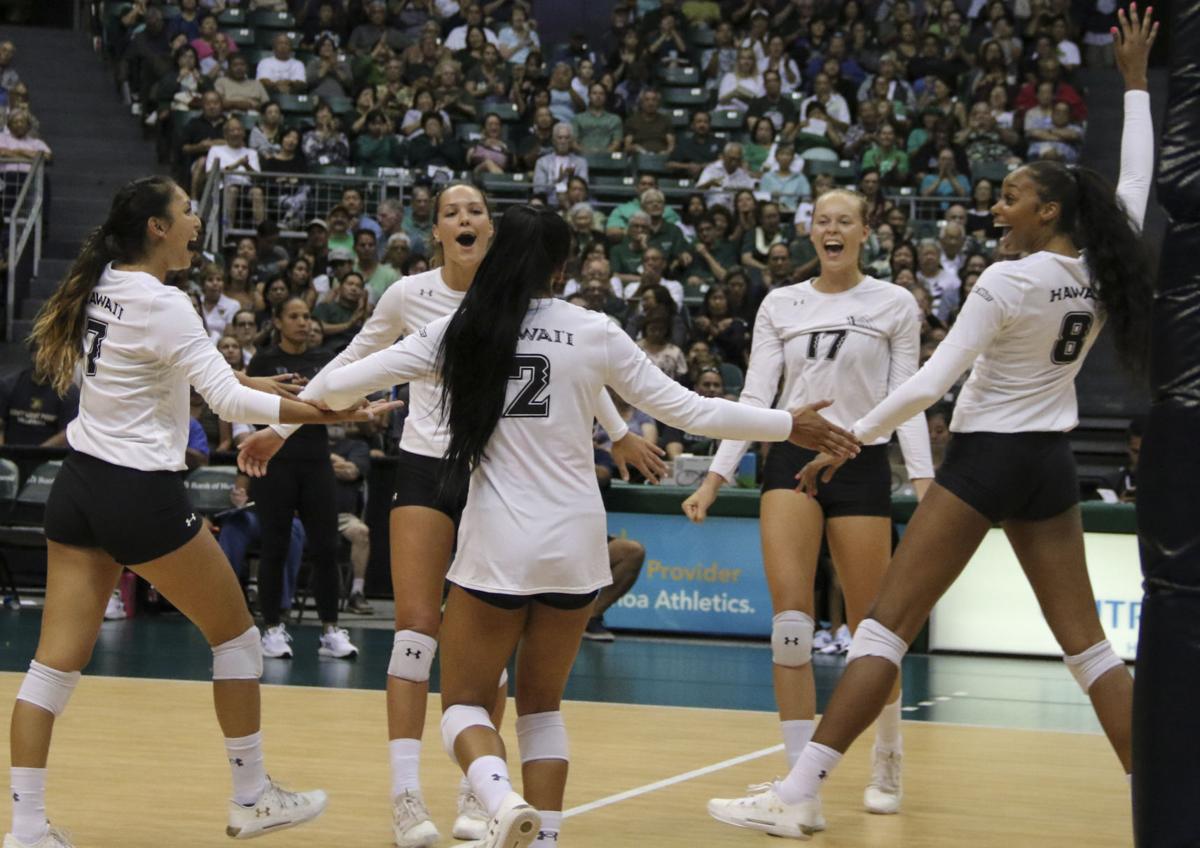 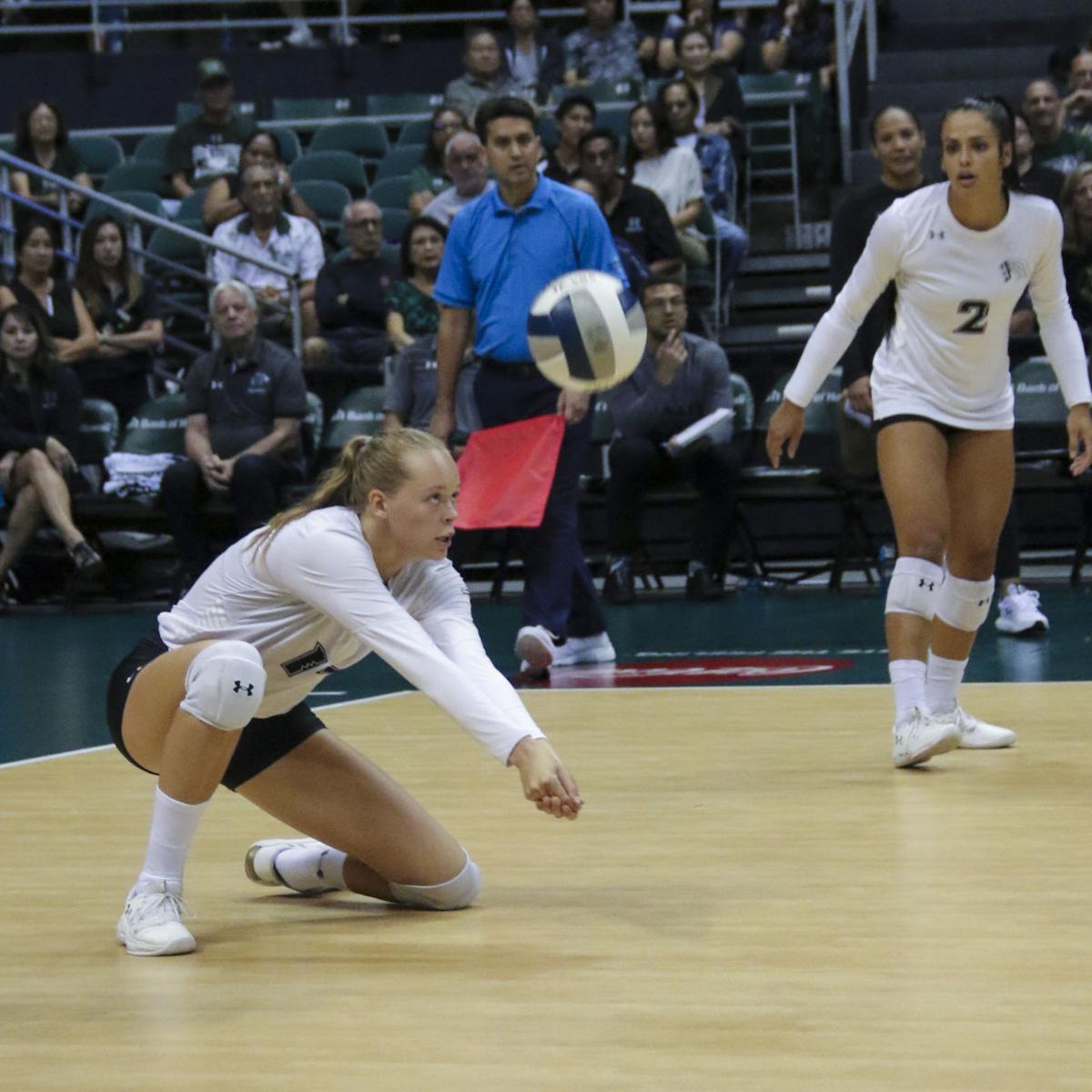 Hanna Hellvig picks up a dig against Army.

Skyler Williams puts down a kill over two Black Knight defenders at the Stan Sheriff Center on Sep. 5

Hanna Hellvig picks up a dig against Army.

Following a quick turnaround after Sunday’s Rainbow Wahine Classic clinching win against Washington, the University of Hawai’i women’s volleyball team (4-0) were able to shake off some early rust as junior middle blocker Skyler Williams’s career high 13 kills led the No. 20 Wahine to a four set victory over Army Thursday night at the Stan Sheriff Center. With the victory, the ‘Bows remain undefeated on the season. The set scores were: 22-25, 25-17, 25-20, 25-19.

“I’m always happy with a (win),” head coach Robyn Ah Mow said. “(But) it wasn’t crisp. You look at the Washington game and the San Diego game, its just crisp. But today, we had free balls coming over, dropping, and going all over, taking the setter into the net. That’s what I mean (it’s an effort thing).”

“It felt good to know that I am improving from my last two years of being here,” Williams said. “I think I did better with communicating with my setter of what I need and what she needs from me as well.”

The Rainbow Wahine gave up three quick points to the Black Knights, but Hellvig was able to stem the tide with 2 kills of her own. Army began to pull away however, as the ‘Bows struggled with an inability to string together consecutive points. Trailing 6-3 early in the set, the Wahine went on a 4-1 run to tie the game up at 7 apiece. With the game tied again at 8-8, an Army kill was ruled a net violation, giving the Wahine their first lead of the game. The call prompted a challenge from Black Knights head coach Alma Kovaci Lee, but the call was soon confirmed. Having just given up the lead for the first time, Army embarked on a 9-3 run to take control of the set. Trailing late, the Wahine were able to turn a Black Knights error into a 4 service scoring run led by Choy. The 5-0 run returned the game to a 17-17 tie. Army went on to hold Hawai’i at arm’s length, picking up a closely contested 25-22 victory in set one. Williams led the way with a team high 4 kills in the set.

Determined to put the set one slip-up in the past, the Rainbow Wahine weathered 2 early Army kills to storm out to a 21-13 lead. Rasmussen led the team on a 5 service scoring run, aided by four Black Knight errors. Army was not able to close the gap, as the ‘Bows finished the set with a 4-4 run to claim the 25-17 set victory and bring the game back to a 1-1 tie. Rasmussen, Hellvig, and freshman middle blocker Tiffany Westerberg each tallied 3 kills in the set. The ‘Bows also flipped the numbers from the first set with a 4-1 blocking advantage.

For the third straight set, Army was able to put itself on the board first. This time, the Black Knights did so with a service ace to open the set. The teams traded leads with back-to-back 3-0 runs. With  Army holding a slim 10-8 lead, the got a spark from the bench in the form of junior defensive specialist Kyra Hanawahine. Led by her 4 service scoring run, the Wahine took back the lead 13-10. The Black Knights tried to get back into the set, but Hawai’i fended off Army with a 12-9 run to close out the set 25-19. Van Sickle led the way with 4 kills as the Wahine took their first game lead 2-1.

Hawai’i was finally able to draw first blood in set 4, with a kill by Williams to open the set. The teams traded blows in what proved to be one of the most tightly contested sets of the game, with 12 ties and 4 lead changes. With the score tied at 14 apiece, the Wahine took off on a 10-2 run to take a commanding 24-16 lead. Army put up a fight with a late 3-0 run, but a Black Knight service error ended the set. The 25-19 set four victory gave the ‘Bows a 3-1 victory.

With the win, the ‘Bows move to 4-0 and remain unbeaten in the young season. When told that the team had four straight wins on the season, Williams quipped, “feels more like 3 ½.” Regardless, the Wahine will look to extend their win streak against Sacramento State on Friday night.

The Rainbow Wahine return to Stan Sheriff Center for their next Invitational matchup against Sacramento State on Sept. 6 at 7 p.m.