With the Hawaii Cat Cafe and Popoki + Tea’s upcoming Kaimuki location, Oʻahu is slowly including animal cafes on its list of fun activities. Similarly, this quirky take on the traditional coffee joint can be seen in various locations in Seoul, including “Meerkat Friends” and “Bunny Cafe” in Hongdae.

Interested in exploring what other animal cafes South Korea’s capital had to offer (as well as a way to relieve stress), I came across “Bau House,” a dog cafe located in the Mapo District of Seoul.

Although Oʻahu does not currently have any dog cafes, there is a chance that you’ve partaken in a similar experience if you’ve attended the “Cram Jam,” an event held every semester by the Campus Center Board Activities Council before finals week. At Cram Jam, participants with a valid UH ID gain access to various activities, including what the CCBAC calls “Dog Therapy” (if it is being offered).

Being a previous dog owner (Rest in love, Anubis), the idea of relieving stress by spending time with man’s best friend is not a bogus idea. According to the Centers for Disease Control and Prevention, dogs and other pets can help decrease stress, blood pressure and feelings of loneliness; they can also increase the chance of exercise and socialization.

Getting to and entering the dog house

If you do not have a car and do not want to pay for a taxi while in Seoul, you can get to “Bau House” by using Line 2 of the Seoul Metro. After arriving at Hapjeong Station, located between Hongik University (Hongdae) and Dangsan Station (Yanghwa Hangang Park), one must find Exit 5 and walk for about seven minutes to reach the cafe.

“Bau House” is on the basement level of the “Jaeil Building.” After entering the cafe’s door, an employee will greet you before collecting the entry fee - 8,000 Korean won (roughly $6.60). Aside from being able to play with the dogs, this fee will get you a free drink, such as juice or coffee. Interested visitors may also purchase dog treats to add a twist to their dog cafe experience.

The cafe is separated into two sections, one with “small” dogs and the other with “big” dogs. Since there were canines resting out of view or interacting with other patrons, I cannot offer an exact amount of how many dogs were in the vicinity; however, I estimate that about 20 were present at the time of my visit.

Playing with the dogs 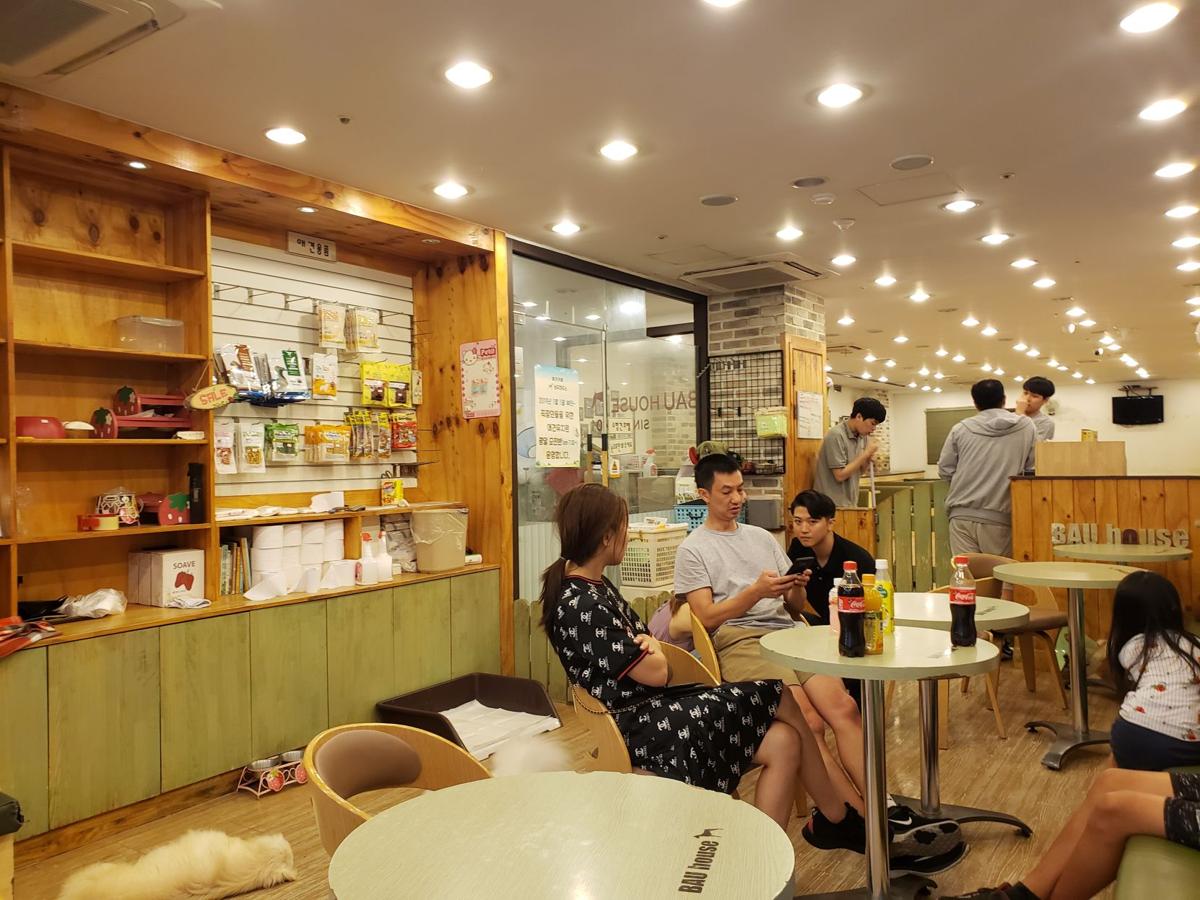 During the visit, many of the "small" dogs seemed content with lying next to or on patrons' laps. 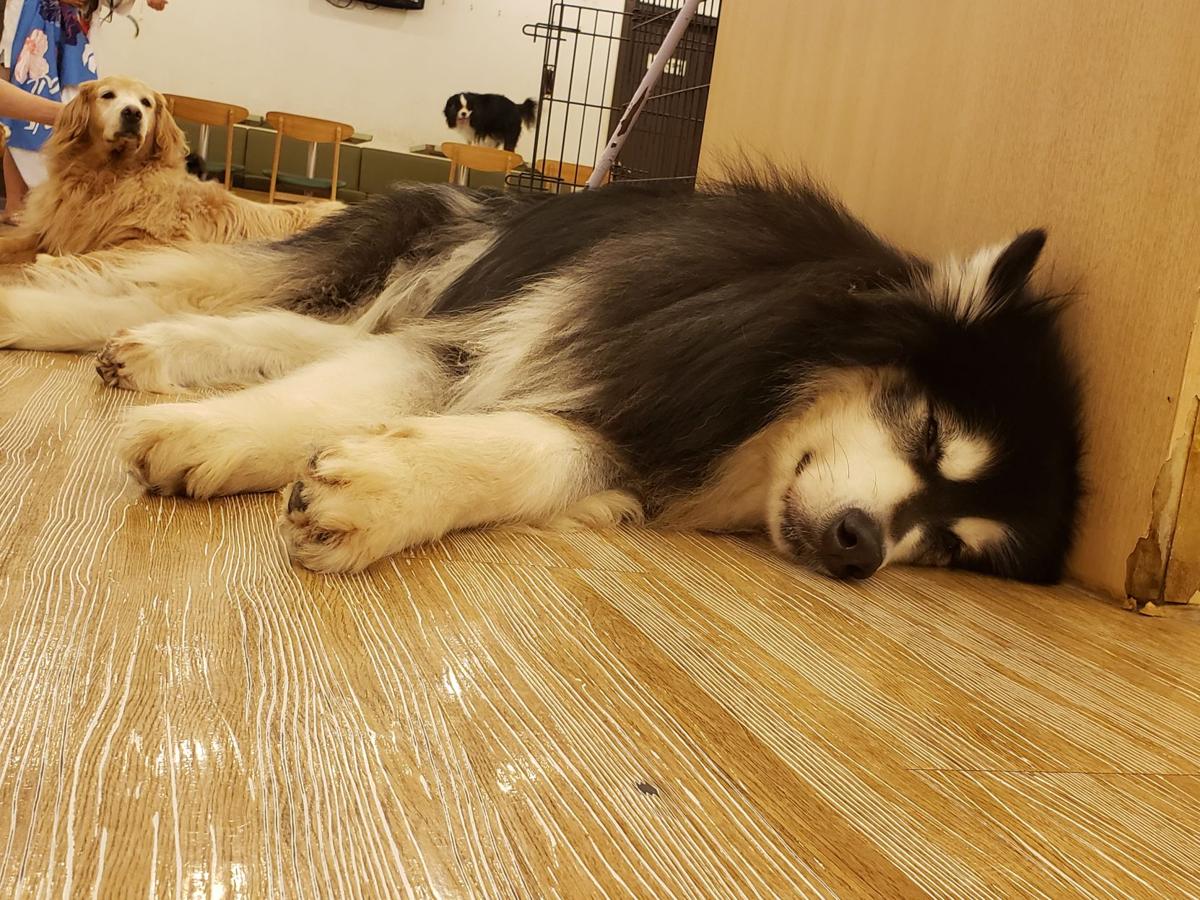 Although the dogs were interacting with the cafe's visitors, some opted for a nice afternoon nap. 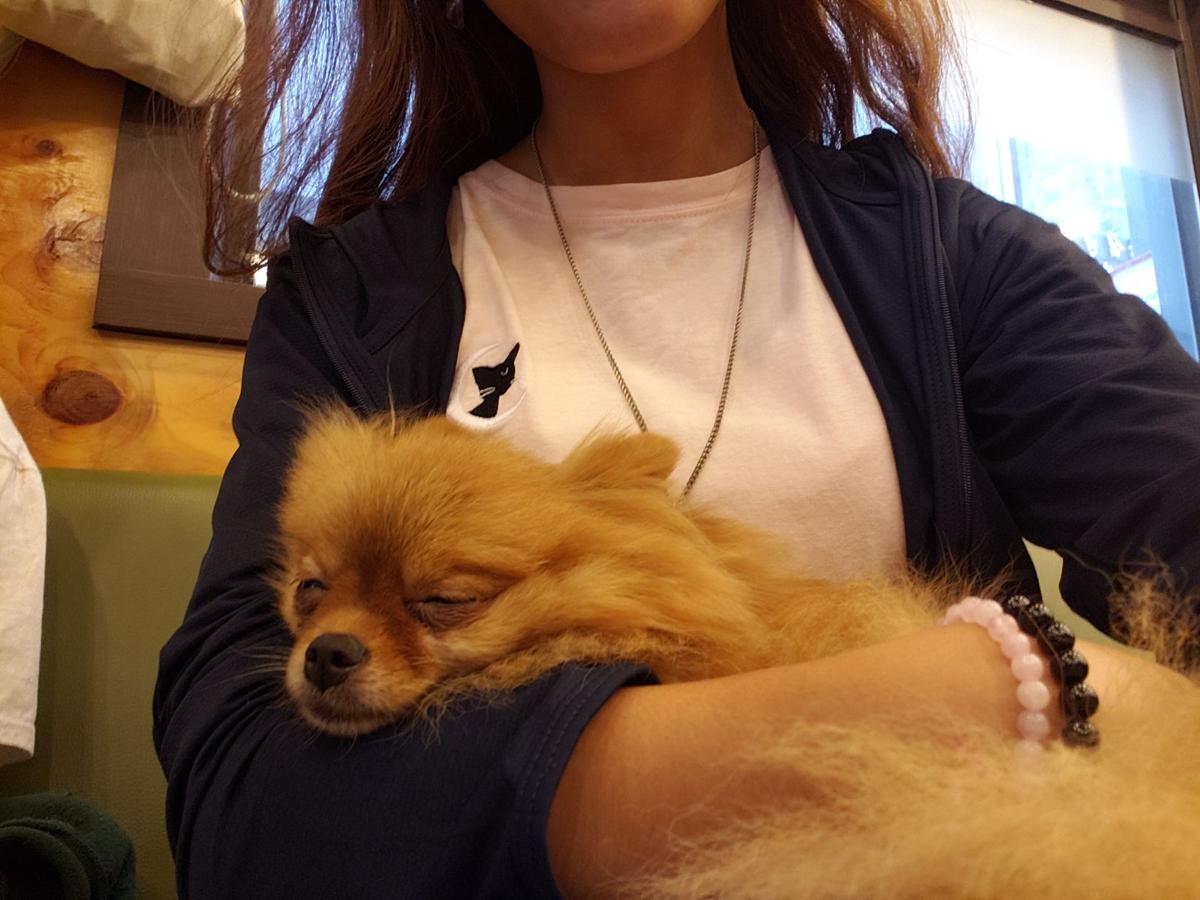 Was it a bad choice to wear a shirt with a cat on it while visiting a dog cafe? The Pomeranian didn't seem to mind.

During the visit, many of the "small" dogs seemed content with lying next to or on patrons' laps.

Although the dogs were interacting with the cafe's visitors, some opted for a nice afternoon nap.

Was it a bad choice to wear a shirt with a cat on it while visiting a dog cafe? The Pomeranian didn't seem to mind.

The first section with the small dogs had a couch lining the far back wall with tables and chairs for visitors to use. Those with purses or bags could hang their belongings on hooks above the couch. Two freezers with cold drinks as well as a hot water dispenser with coffee were on the opposite side, along with dog treats and lint rollers. There was also a small staff area that employees would enter frequently.

What was surprising was the dogs’ willingness to interact with their patrons. As soon as I sat down, a Pomeranian-mix plopped itself into my lap and fell asleep. My friend, who joined me, had a French bulldog go back and forth between her and the cafe’s other visitors.

As much as the Pomeranian-mix tugged at my heart strings, I will always favor bigger dogs like pit bulls and American bullies. After about 20 minutes, I transferred the sleeping pup to my friend and ventured to the second section, which was separated by a wooden gate.

The big dogs had more area to play in, with booths lining either side of the room. A wooden box in the center of the room housed the cleaning supplies.

There were dogs in this section that I would have thought were “small,” though I wasn’t complaining. Another patron purchased dog treats, so many of them were following her.

Out of all the dogs in this area, one in particular caught my eye.

Why? Because of its size.

When standing, the dog came up to my mid-torso. I am 4’11”, so you could probably imagine my bewilderment. Unfortunately, in my surprised state, I forgot to inquire about its breed.

Although the visit ended with my friend and I picking off dog fur, our stress was now nonexistent.

Overall, “Bau House” provided a fun first “dog cafe” experience. With an increasing interest in animal cafes on Oʻahu, it would be neat to see a location like “Bau House” appear on the islands.

Kailanianna Ablog is a senior at the University of Hawaiʻi at Mānoa. She is pursuing a major in anthropology and certificates in Korean language and ethnic studies. Outside of her duties as Ka Leo O Hawaiʻi’s Opinions Editor, she is a student interchanger with the UHM Outreach College and a member of SW!TCH, a Korean pop dance cover group.

‘Bows take alumni back to school

Under the Friday night lights of SimpliFi Arena at Stan Sheriff Center, the Rainbow Warrior volleyball team toppled generations of ‘Bows 2-0 i…

After expressing interest in the University of Hawaiʻi football coaching vacancy earlier in the week, former UH coach June Jones has turned do…