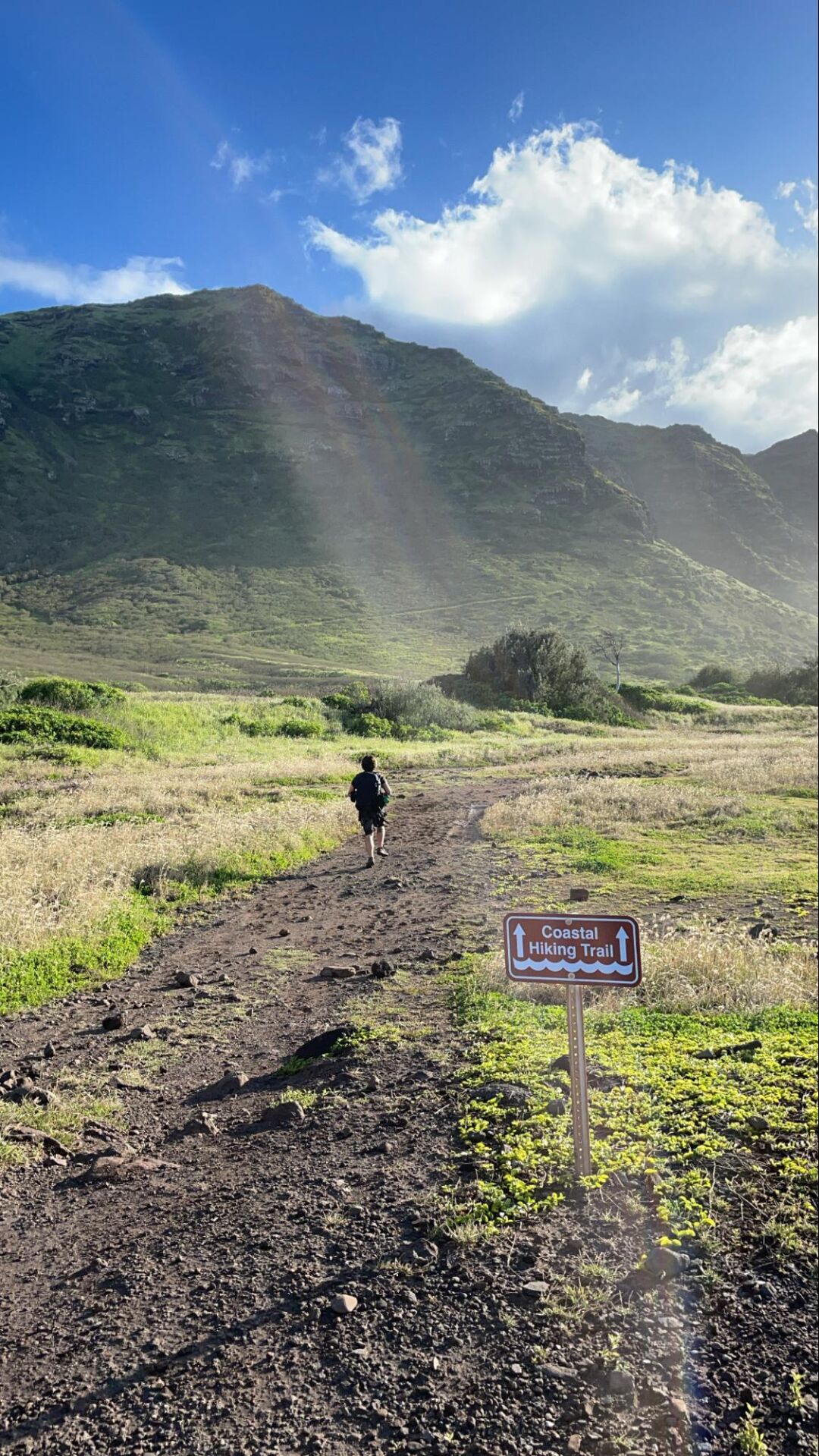 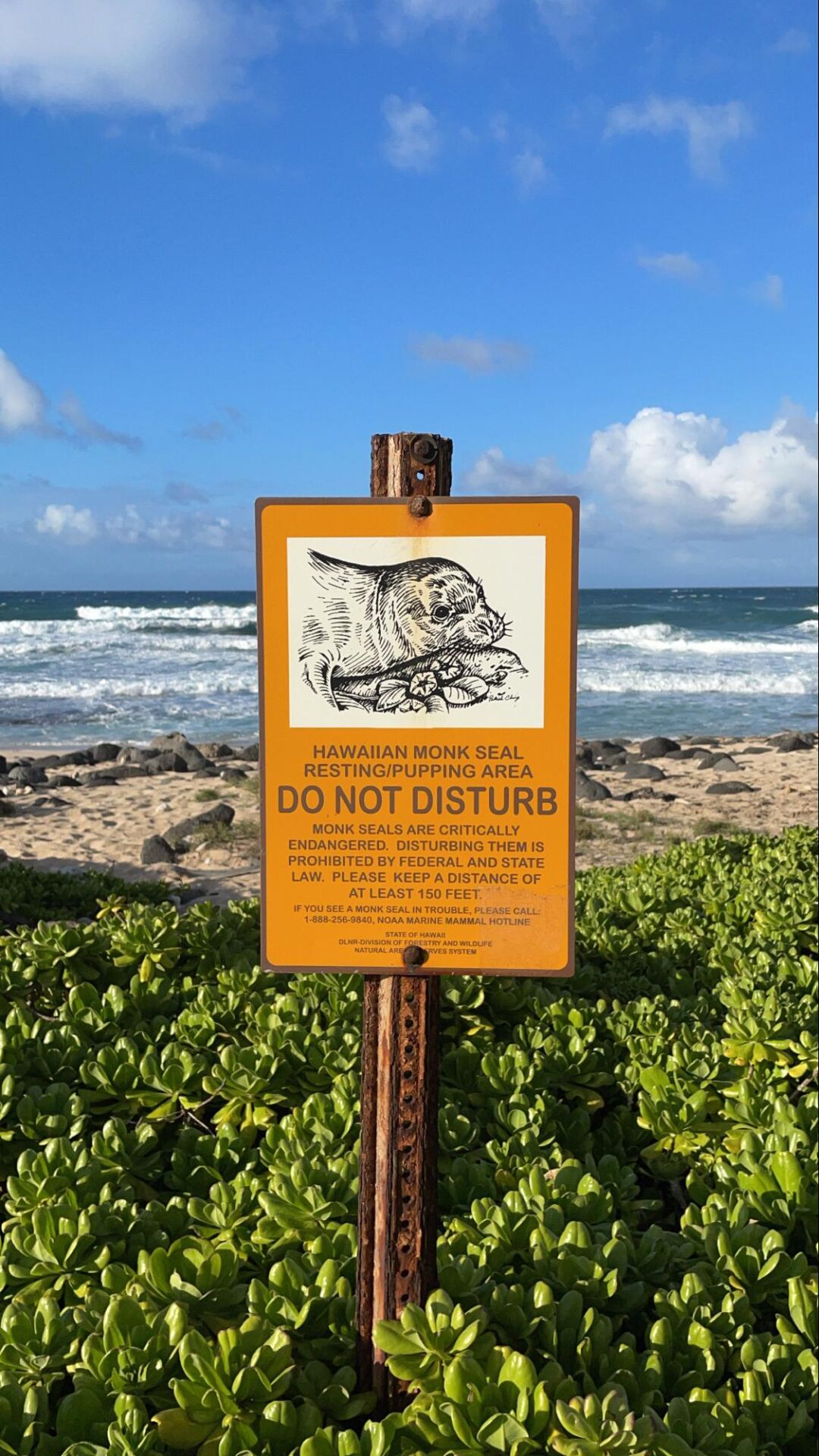 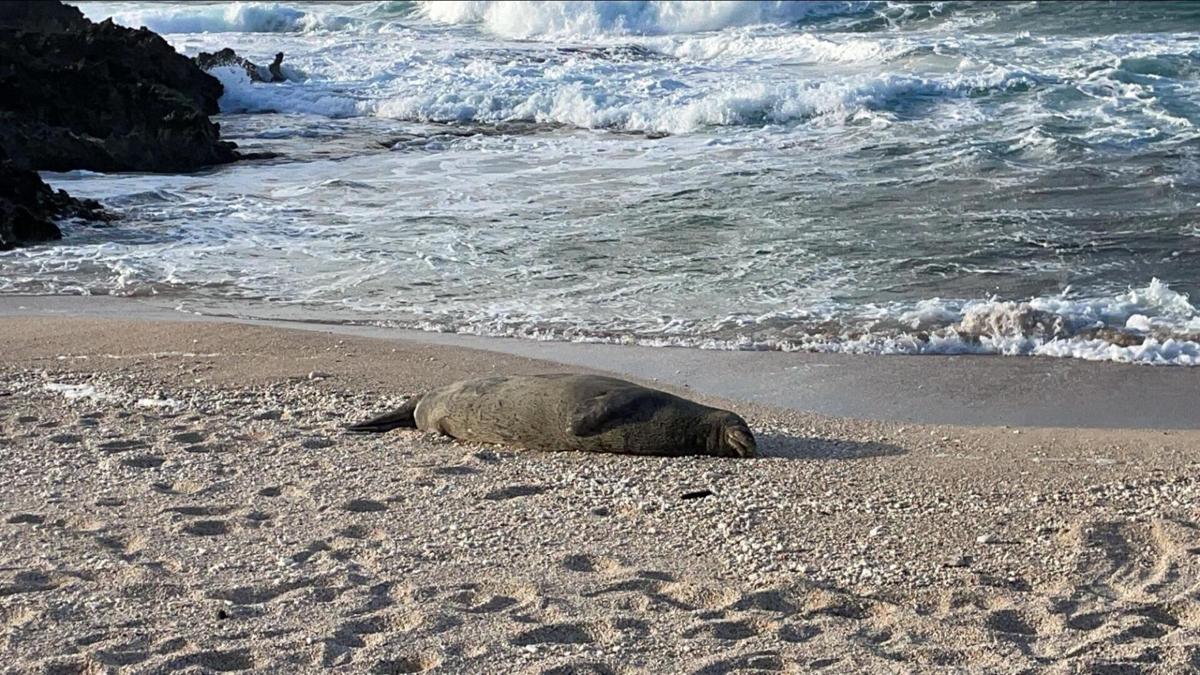 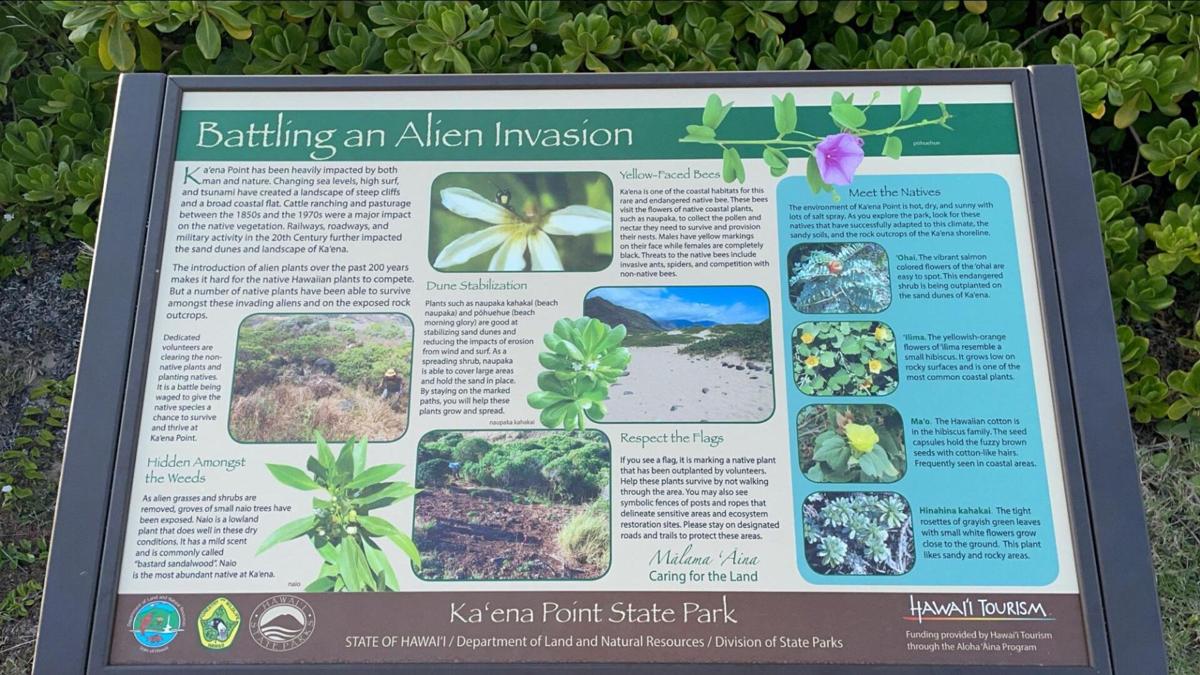 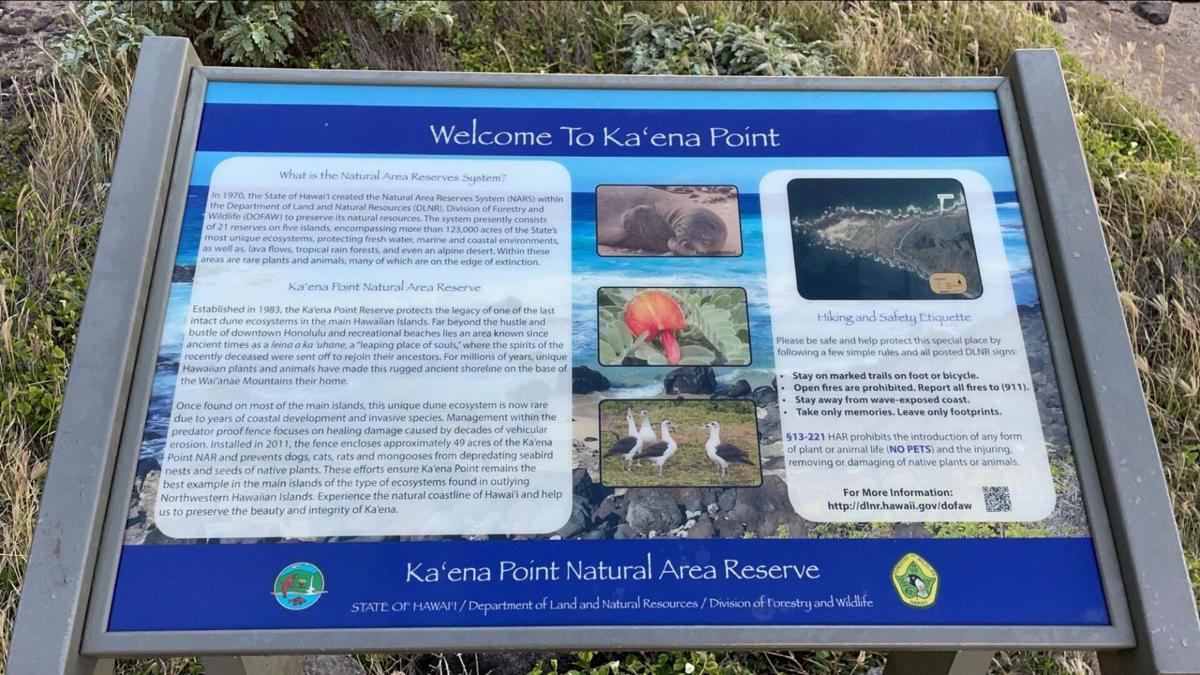 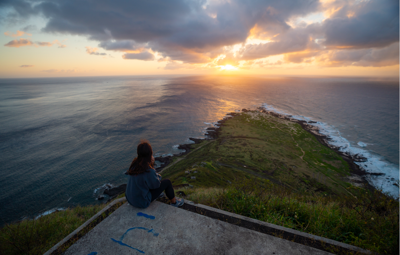 The hike out to Kaʻena Point in Kaʻena Point State Park, the western most point on Oʻahu, is filled with natural history, endemic species and beautiful scenery that hikers of all abilities can visit at any time of the year.

Whether you begin the Kaʻena Point hike from the north or west side of Oʻahu, the hike is a fairly moderate trail with no significant elevation gain until the very end where the pillbox is located. The distance coming from either direction is around 5.8 - 6 miles along the coast and up to the pillbox. To get to the upper pillbox at the very end, the last part of the trail gains roughly 520 ft. in elevation, great for panoramic views of both the north shore and west side of the island.

To prepare for the hike wear sunscreen and preferably shorts in case the trail happens to be muddy. After recent rains, large puddles tend to form on the road and trail, so wearing clothes that you don’t mind getting dirty is essential. At least two liters of water per person should be carried. Single-use plastic water bottles are not enough water and are not encouraged when thinking of the ʻāina.

The trail out to the point will begin on mostly moderate flat terrain all the way to the fence which is inplace to protect nesting sites from rats, pigs, mongoose and pets. Once you reach the predator proof fence you will have the option to explore the western most point of the island, or continue up the ridge for panoramic views of Oʻahu’s north and west shores.

Disclaimer: Please be aware that at this point you are entering a fragile habitat as outlined here by the Hawai‘i’s Department of Land and Natural Resources. The habitat within the predator proof fence is for the Hawaiian Laysan albatross (Mōlī) (Phoebastria immutabilis), the Wedge-tailed shearwater (‘Ua ‘u kani) (Puffinus pacificus), the White-tailed Tropicbird (Koa‘e ‘ula) (Phaethon lepturus) the Hawaiian Monk Seal (Monachus schauinslandi) and other native and endemic species. Nesting sites can commonly be found in the sandy coastal areas on the western most point among the Naupaka and ʻIlima. This is all to say that eleven federally endangered species are known to be found at Kaʻena Point so please use good judgement, stick to the small trails and watch your step.

The hike to the pillbox begins on the outside of the fence at about the middle of the small road that parallels the fence. If you are having trouble finding the trail, look slightly more on the north side of the point, and it can also more easily be seen on Apple Maps satellite 3D mode. The small ridge hike to the upper most pillbox passes multiple different structures and platforms on the way to the top. If you are prepared with a headlamp for the hike back, the pillbox can make a great spot to catch the sunset on a clear night.

Whether beginning the hike from the north or west side of Oʻahu, hikers will get beautiful views of the Waianae Mountain Range that is Kaʻena Point. This area was formed by a volcanic eruption that took place 300 million years ago. Through intense weathering and wave action on the shores, coral reefs made their homes in the crevices of the cliffs. Over time, the volcanic rock was transformed into soft white sand dunes that created a unique ecosystem for the many different plant and animal species that flourish here.

Prior to becoming a nature reserve and hiking area, the land at Kaʻena Point had many uses. Previously, it was a fishing village, a military base and a railroad. It was established as a nature reserve in 1983 because its uniqueness was threatened by human interactions and invasive species.

After extensive efforts, the area was restored through the clearing of invasive species and the outplanting of native species. Seabirds eventually returned to Kaʻena Point around the year 2000, however, they were still very vulnerable to predators. This led to the construction of the predator proof fence to keep these dangerous predators away from nesting seabirds. The fence provided additional benefits–it allowed endangered plant populations to be reintroduced and encouraged the return of previously occupied species. Today, it is a 59-acre natural area reserve that has an immense cultural, social and natural significance.

Kaʻena Point is culturally significant to Hawaiians because it is seen as leina a ka ‘uhane, or the leaping place of spirits. This cliff is where a Hawaiian’s soul at death would meet with their ‘aumakua souls to either be guided back to life in their body or to leap into the 'aumakua world.

Kaʻena Point has native flora and fauna that are both indidgenous and endemic to the Hawaiian Islands.

One of the most famous species that hikers can see is the native Hawaiian Monk Seal (Monachus schauinslandi). Unfortunately, the Hawaiian Monk Seal is on the federally endangered species list. If one is encountered on the hike, be sure to give the seal at least 50 ft. of distance as recommended by the National Oceanic and Atmospheric Administration (NOAA). As a testament to their conservation status the seals are protected federally under the Marine Mammal Protection Act and the Endangered Species Act. However, as of S.B. 2441 in the Hawaiʻi state legislature, stricter penalties are in place above those at the federal level.

One of the most commonly found plants on the hike and around Hawai‘i is Scaevola sericea, also known as beach Naupaka. This particular species is the only indidgenous species in Hawai‘i in the Scaevola genus. It is found at low elevation areas, and is only one of two species in its genus found along Hawai‘i’s coastlines. At Kaʻena Point, S. sericea is in abundance all over the coastal areas.

In total there are ten species of Naupaka that are native across the Hawaiian Islands, nine of which are endemic. The other much less commonly seen and federally endangered coastal species is Dwarf Naupaka (S. coriacea). 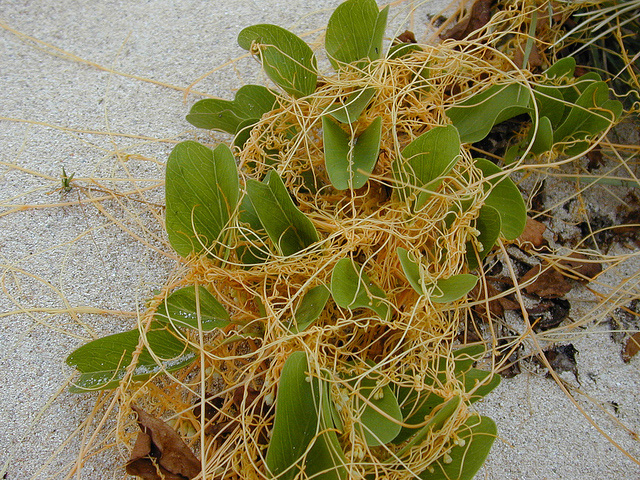 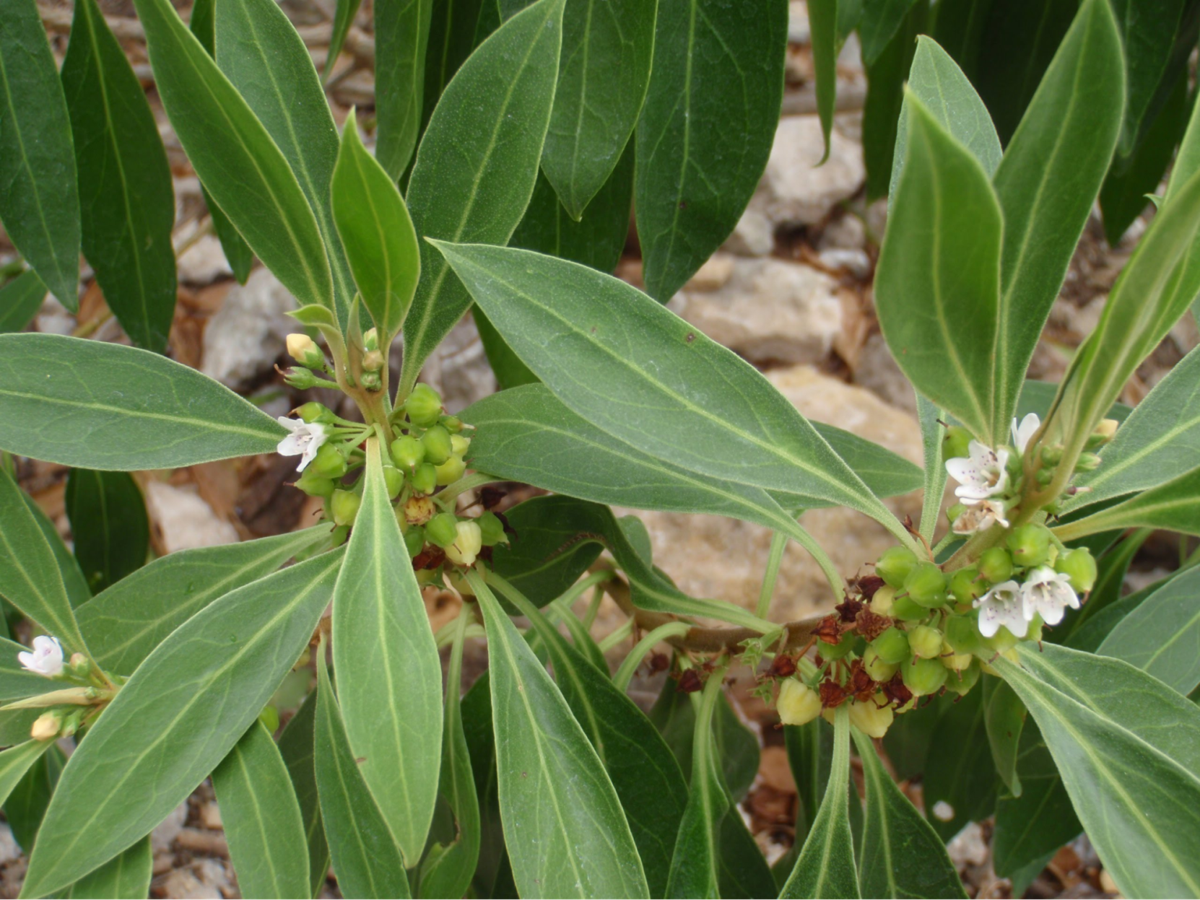 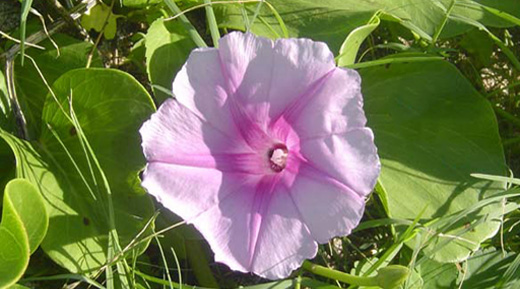 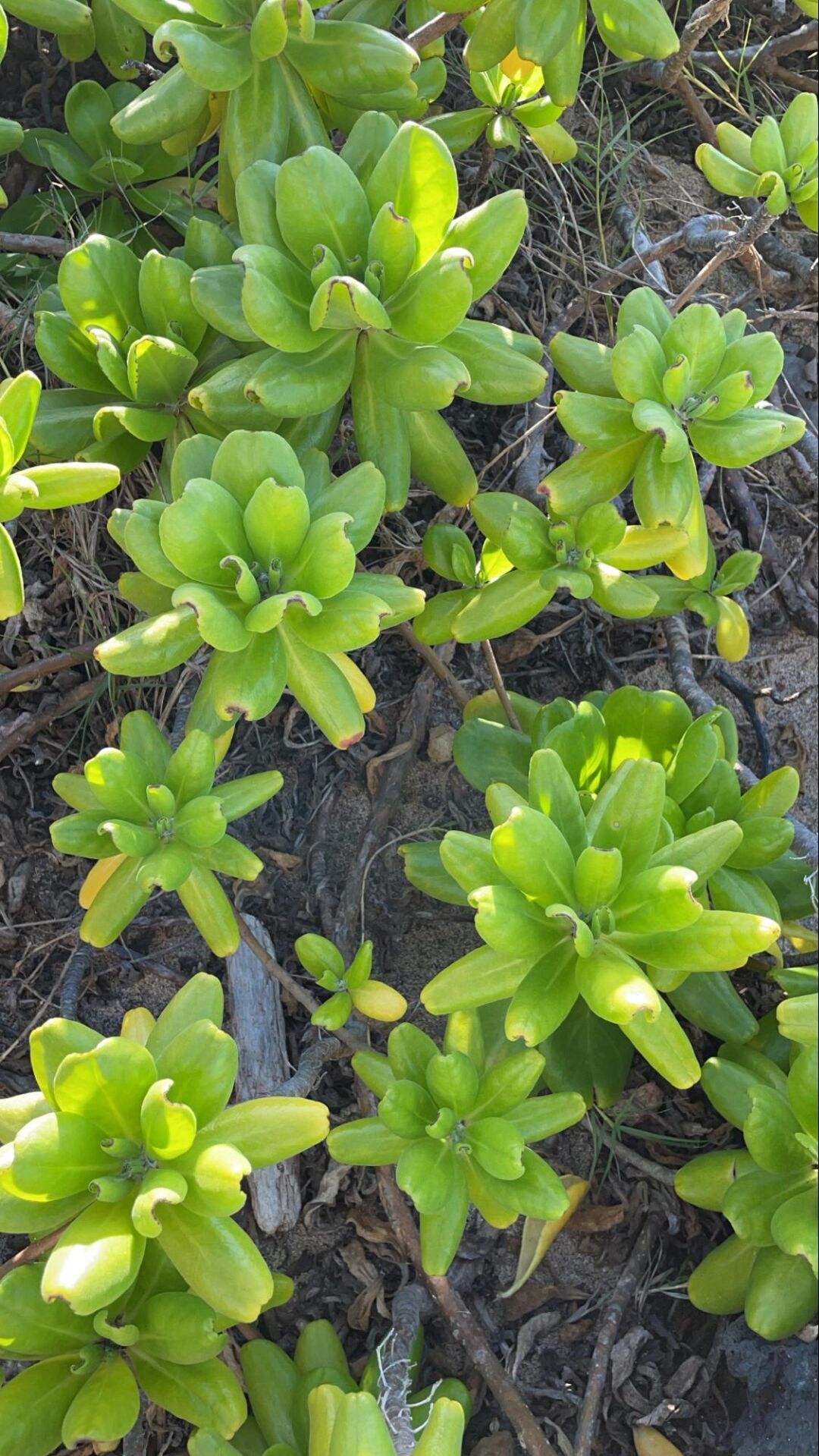 Beach Naupaka has seven endemic mountain counterparts whose ranges are mostly in the higher, wetter elevations of Hawaiʻi.

On this hike, hikers may see some of the common birds that find refuge on Kaʻena Point. The Laysan Albatross (Mōlī), the Wedge-tailed Shearwater (‘Ua ‘u kani) and the White-tailed Tropicbird (Koa‘e ‘ula) can be found on the trails and hikers should be cautious about where they step year-round.

Hikers can expect to see the Laysan Albatross that mostly makes its home in the Northwestern Hawaiian Islands, but it is found here during their breeding season between November to July. The Wedge-tailed Shearwater is a monogamous breeder meaning that they return to the same nest each year and will be breeding during the months of March through November. Lastly, the White-tailed Tropicbird is a small seabird that can be found nesting in the cliffs and caves of Kaʻena Point from March through October.

Although the installed fence protects these species from harmful invaders and predators, all of these species are seeing population declines as of recent years which leaves much of the responsibility with hikers to do their part to minimize their impact during their visit as mentioned in the disclaimer.

There are also several other native plant species that help to create the nesting habitat at Kaʻena Point that hikers should keep an eye out for. Some of these plants are Beach Morning Glory (Pōhuehue), False Sandalwood (Naio) and Dodder (Kaunaʻoa).

Beach morning glory is a trailing vine with large pink or white flowers which are unique to the islands from Oʻahu to Hawaiʻi. It is often seen growing alongside beach Naupaka. Its immature leaves were used medicinally and its vines for cordage by Native Hawaiians.

Another species known as False sandalwood is endemic to the Hawaiian Islands; its flowers are small and white with a fragrance that is similar to that of sandalwood. It gets its name for that very reason and was known to be sold under the guise of true sandalwood.

Hawaiʻi’s endemic Dodder can usually be found growing over other plants at Kaʻena Point, as it is a parasitic plant. It is a notable mention because its odd appearance can cause it to be easily mistaken for litter. Its appearance is a leafless, deep yellow vine whose stems and seeds are often used in the making of Hawaiian leis.

It is strongly advised that hikers do not enter the water at any point on this hike. Other than the more apparent dangerous shore break on exposed lava rocks, currents toward the point can be extremely dangerous and rescue efforts minimal. Bringing enough water and sunscreen cannot be overstated, which is why it might be recommended to go later in the day or early morning to avoid the worst heat of the day.

As always please follow all applicable laws and regulations, and overall be respectful. Pick up your trash and the trash from others so that this fragile ecosystem can continue to thrive and remain open to the public.