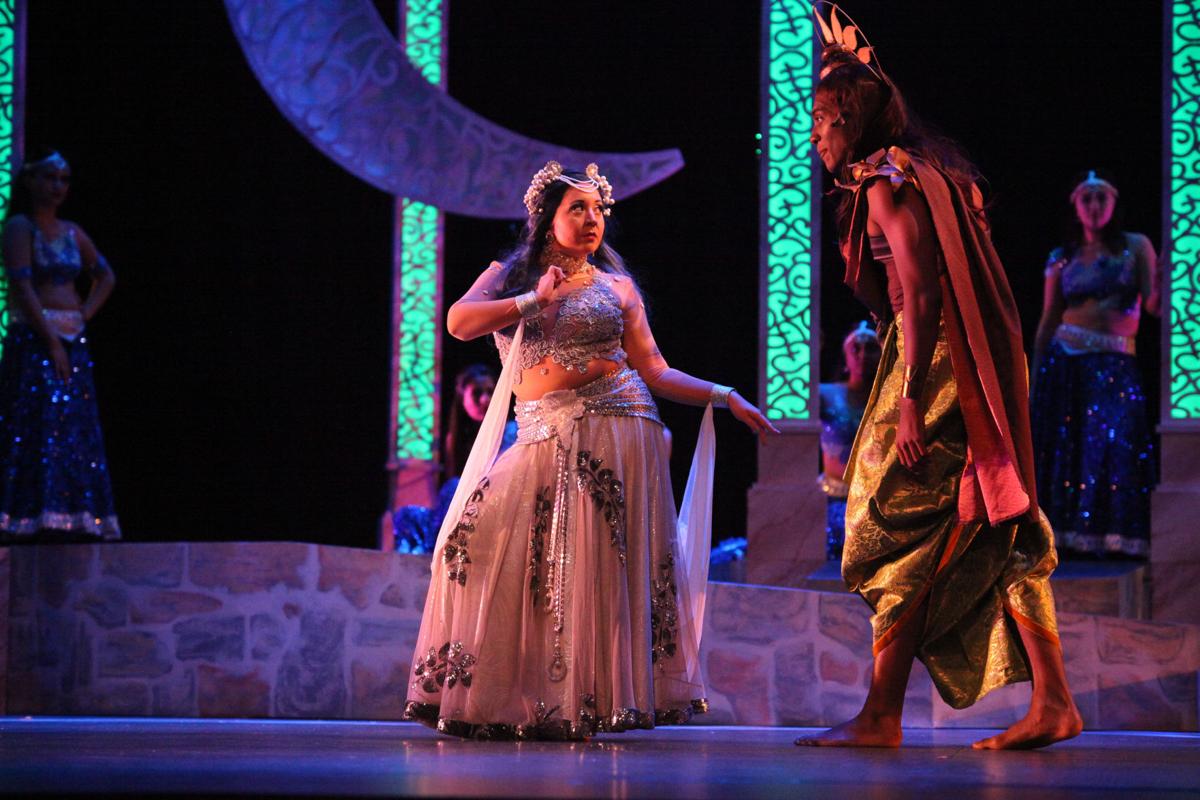 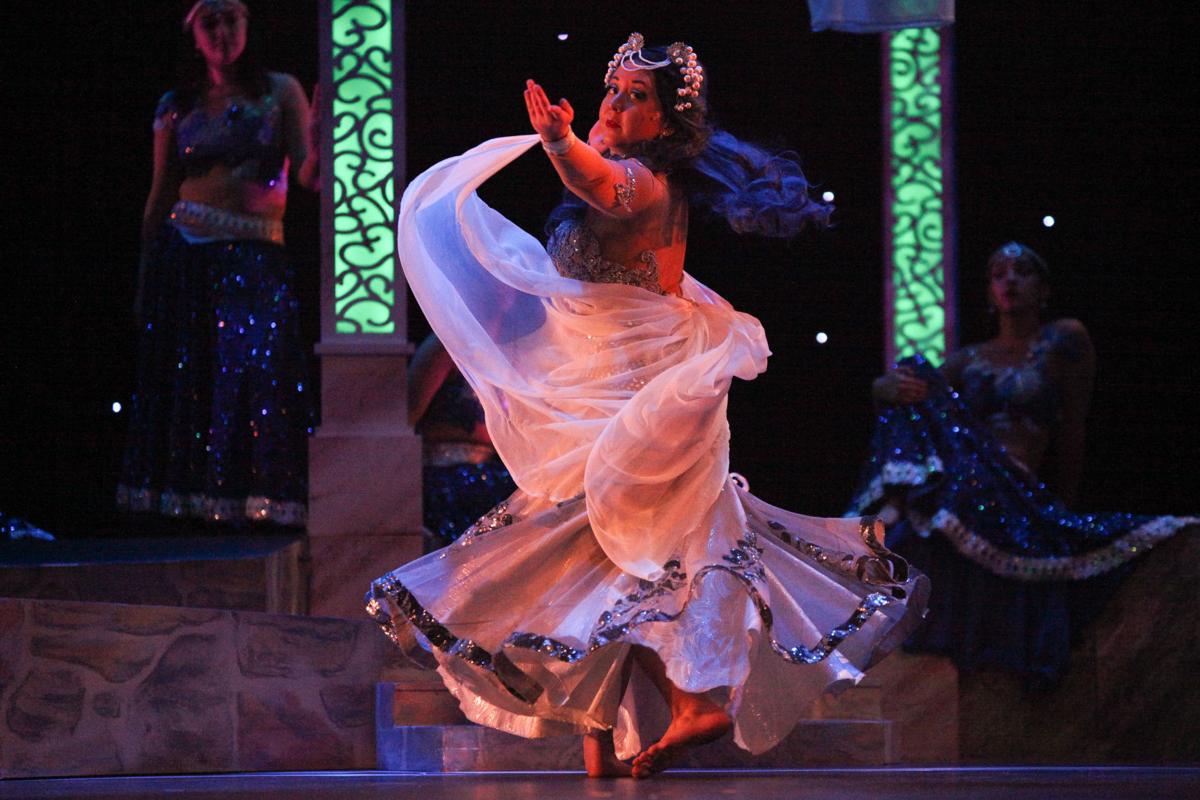 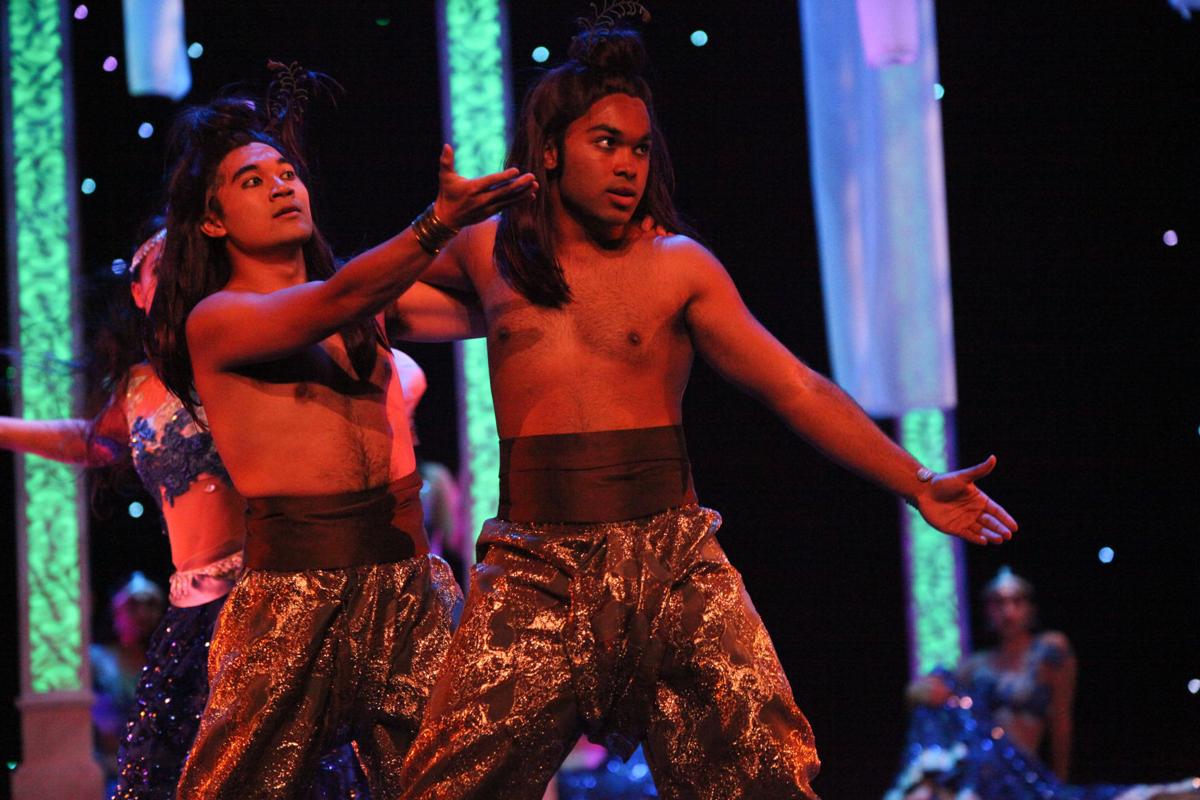 Bak-Bak (Qalil Ismail and Dylan) calls attention of Abhimaan (Jarren Amian), the fairy king, in the opening of the forest of Kennedy Theatre's "A Midsummer Night's Bollywood Dream" on Monday, Jan. 28, 2019. (Photo by Cassie Ordonio) 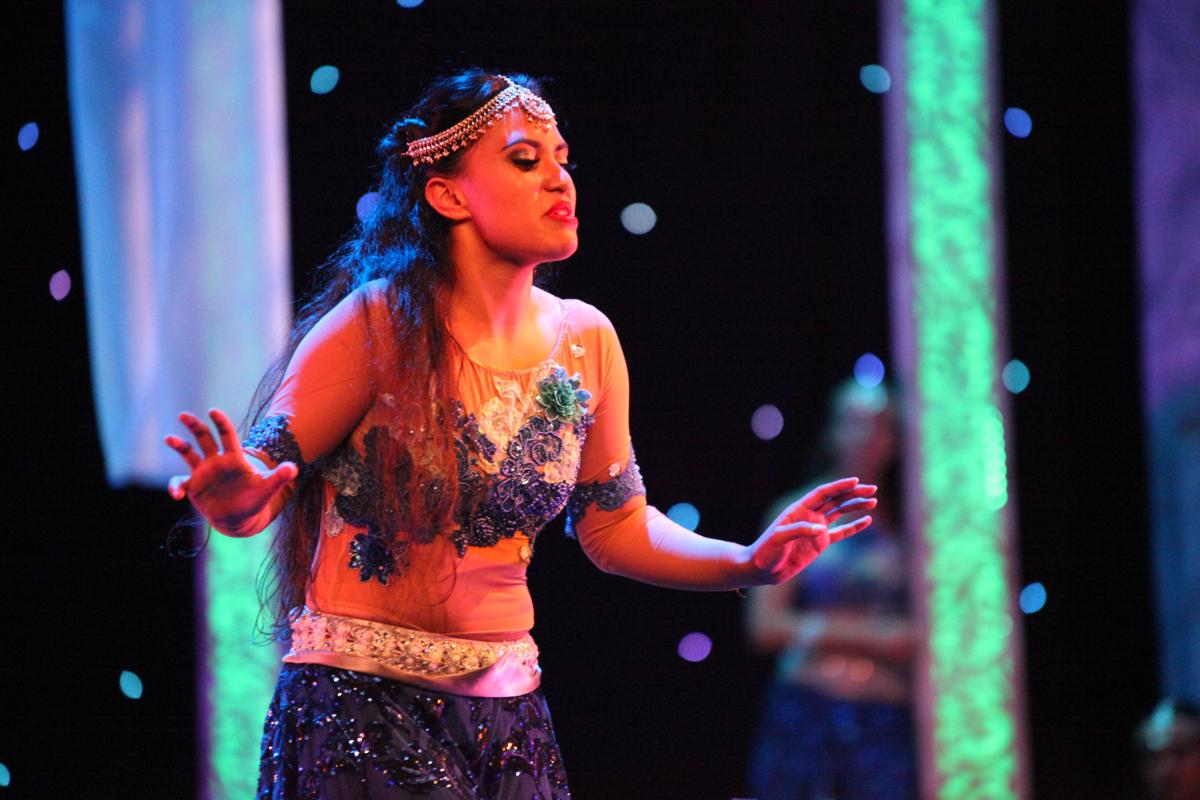 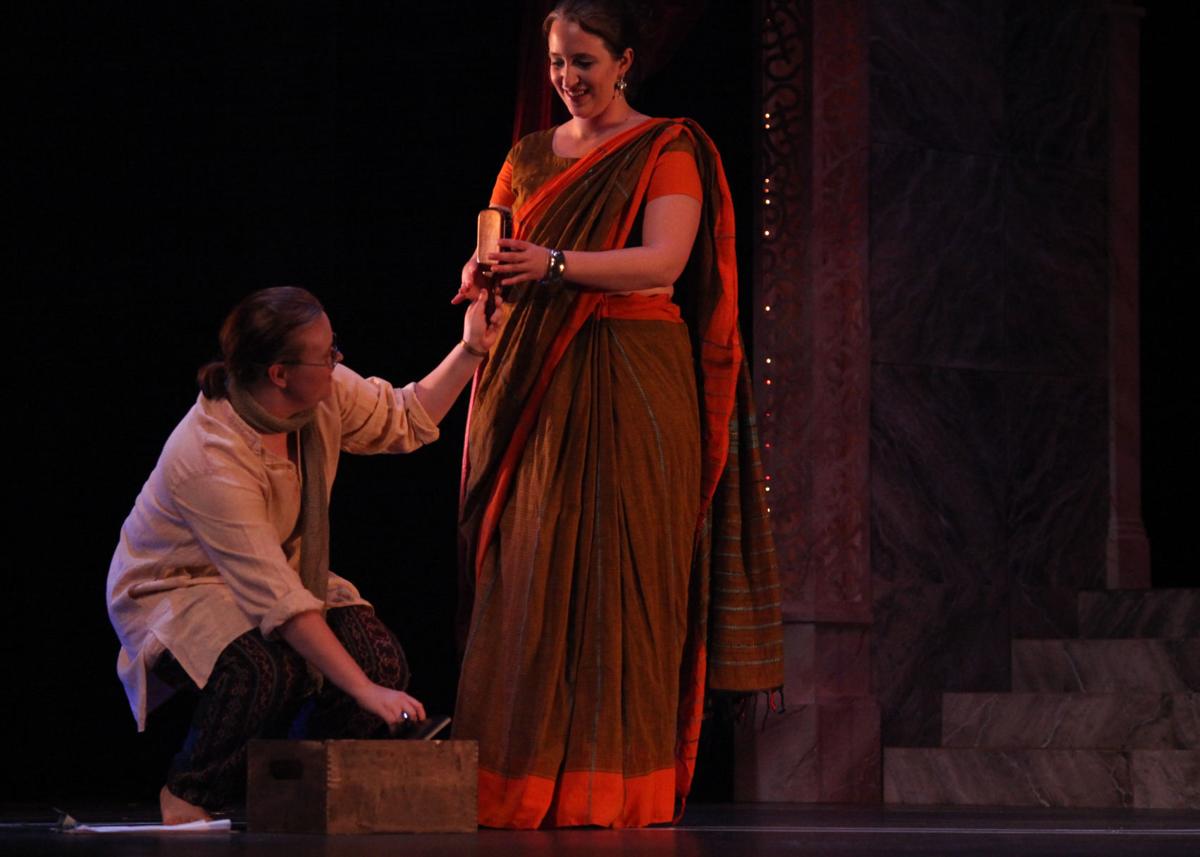 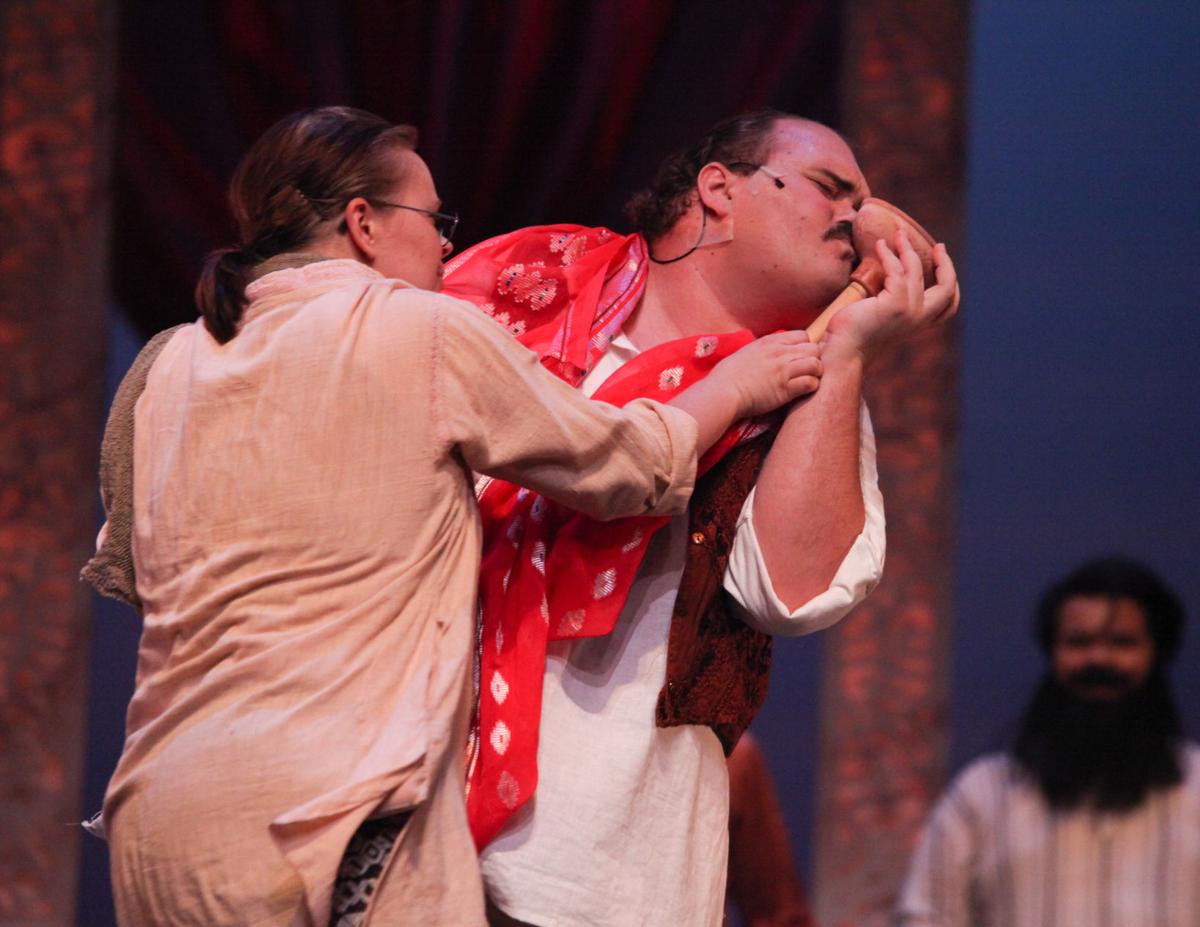 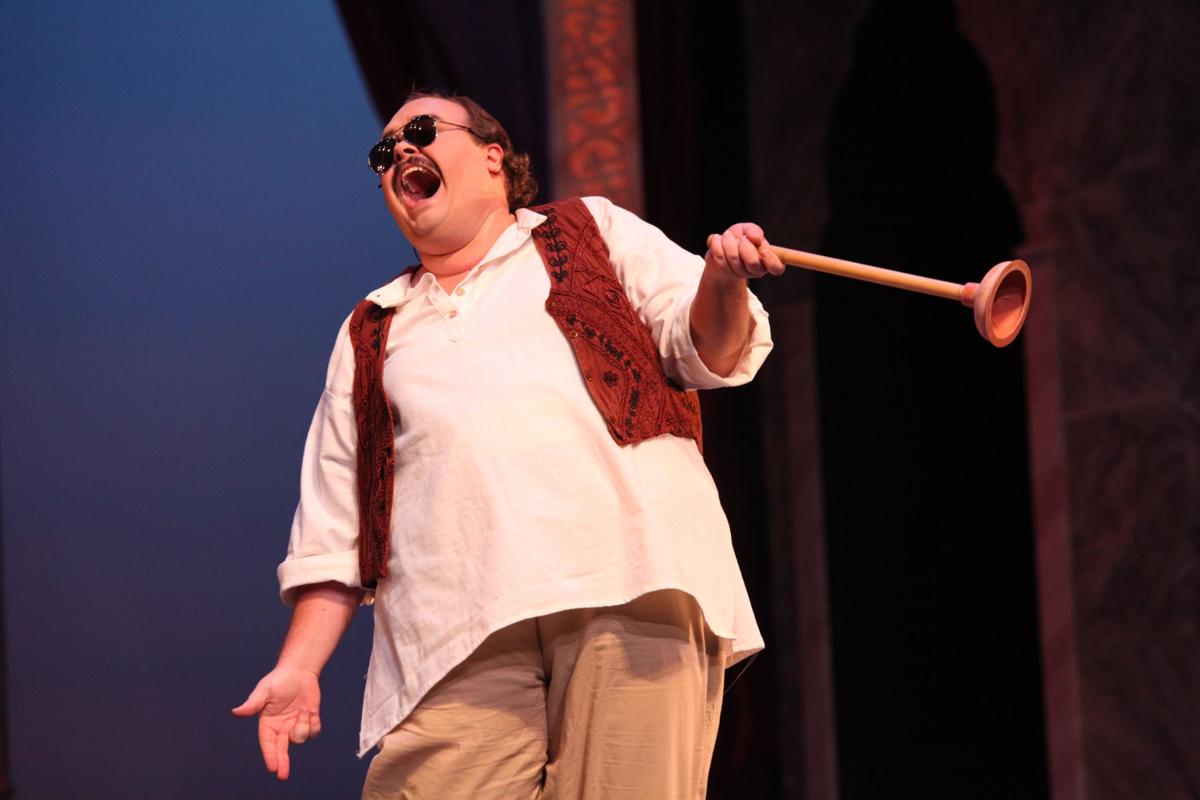 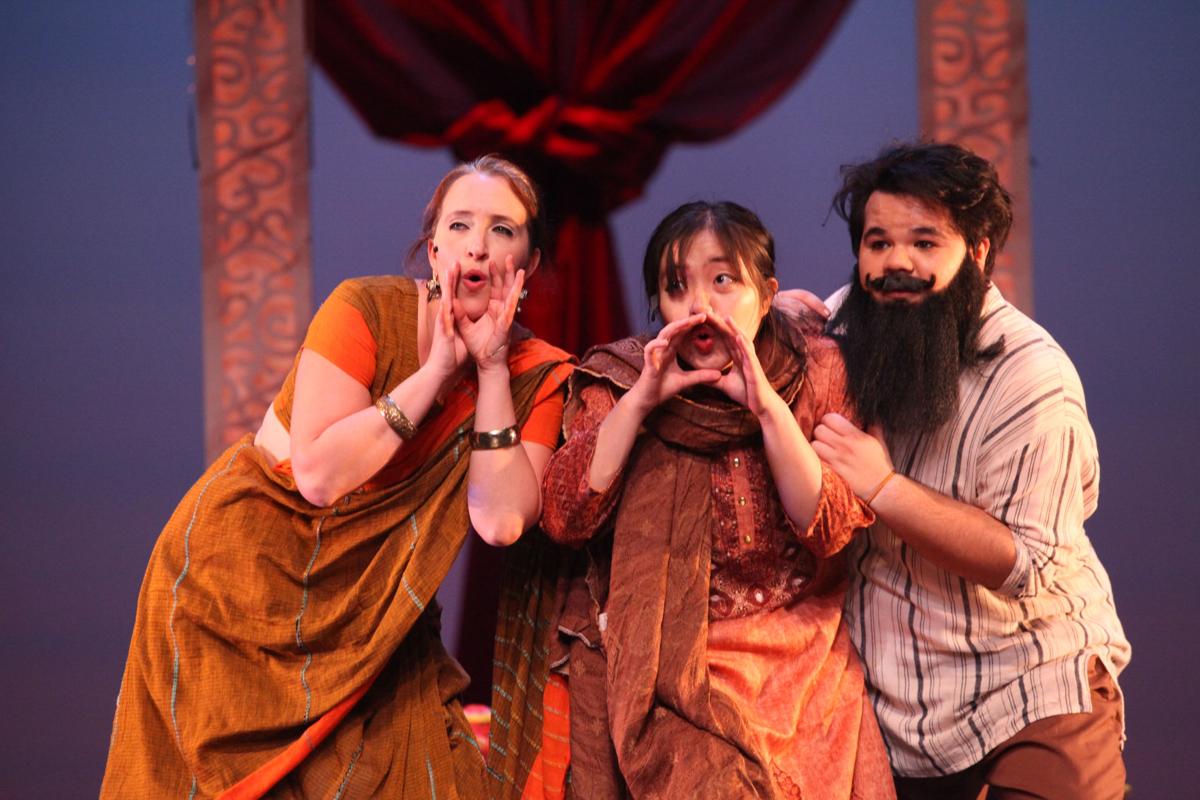 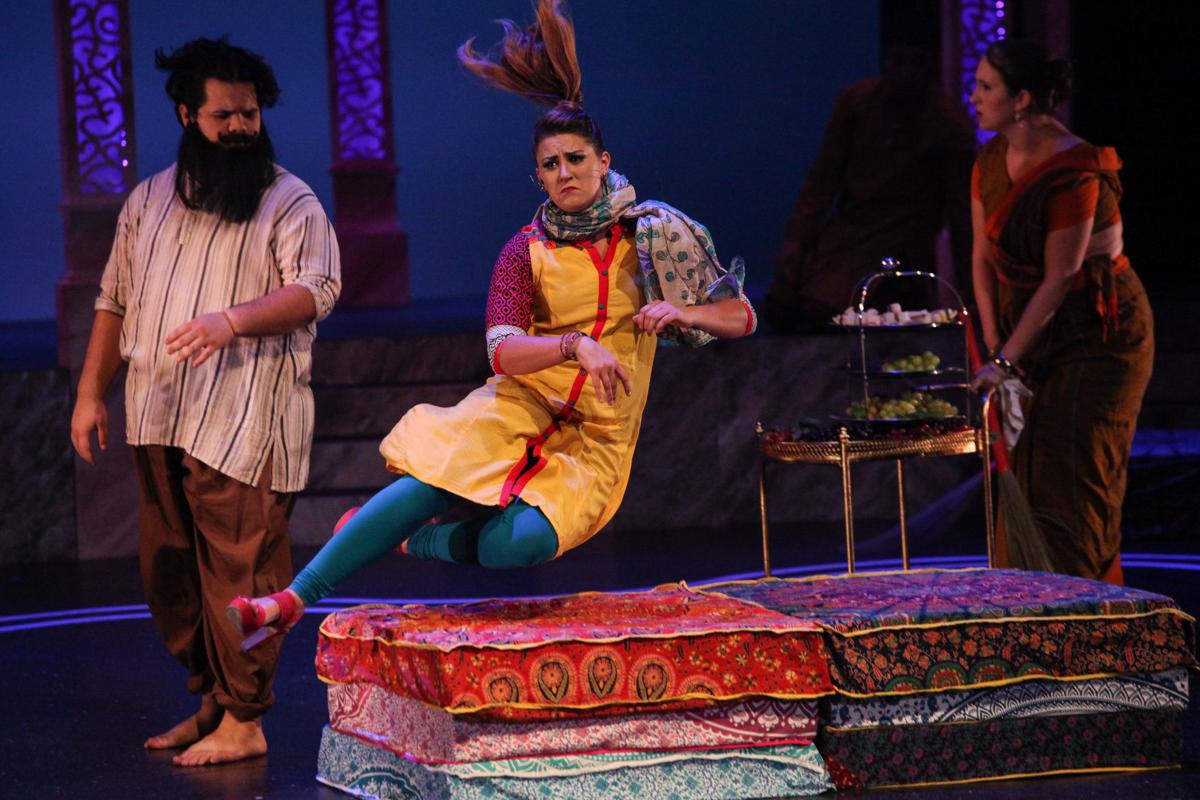 Bak-Bak (Qalil Ismail and Dylan) calls attention of Abhimaan (Jarren Amian), the fairy king, in the opening of the forest of Kennedy Theatre's "A Midsummer Night's Bollywood Dream" on Monday, Jan. 28, 2019. (Photo by Cassie Ordonio)

Also available at the Kennedy Theatre Box Office Monday through Friday from 10 a.m. – 1 p.m. with extended hours on show days.

The University of Hawai‘i at Mānoa theater department is performing “A Midsummer Night’s Bollywood Dream,” a musical co-directed by professor of theater Paul Mitri and Center for South Asian Studies Director Sai Bhatawadekar, with original music and lyrics composed by Ike Webster and Bhatawadekar.

The play tells the story of two forbidden lovers, Hema and Sikander, who run off into the woods to marry in secret.

They disclose their plan to Hema’s friend, Leena, who tells Amarpreet, the man Hema is arranged to marry, so she (Leena, who is in love with Amarpreet) can win his favor and love.

Chaos, feuds and fights ensue as the characters flee to the woods, and mischievous creatures called Bak-Bak are called upon to wreak havoc and utilize a magic flower that will cause one to fall in love with the first person they see. In true Shakespearean fashion, “A Midsummer Bollywood Night’s Dream” is a play of comedy, unrequited love and mayhem combined with revamped Bollywood characters, song and dance.

“Some ideas came about because Bollywood has been engaging in Shakespeare even more,” Bhatawadekar said. “We thought (A Midsummer Night’s Bollywood Dream) would be an interesting way to bring together what the Western theater program had on the table and the South Asian component that needed to be brought in.”

Mitri added that the Shakespearean aspect of the play is more of a framework, particularly in this production.

“This is important because it’s an educational genre experiment, that it’s important for Paul and his Shakespeare students to have engaged in Shakespeare’s text and to learn it and to deliver it in a certain way,” Bhatawadekar said. “And is important  (sic) for Bollywood to see how that genre engages with Shakespeare’s text. It has an ensemble, over the top comedy, love stories, magic and music components.”

Bhatawadekar also explained that the term “Bollywood” does not refer to the one hundred years’ history of Hindi Cinema, but instead to the genre of song and dance that emerged when Indian culture was opened up to Western audiences.

The music in “A Midsummer Night’s Bollywood Dream” is a mixture of English and Hindi. Many songs will be from Shakespeare’s text but transformed into Hindi song and poem.

“In a time where there is a growing national movement to end yellowface, brownface, blackface and disability portrayals, ‘A Midsummer Night’s Bollywood Dream’ makes the university’s Truth, Racial Healing and Transformation initiative look like an effort for the sake of optics,” UH Mānoa lecturer Kiana Rivera said in a physical letter she sent to Kennedy Theatre last semester.

“If you don’t think the title alone suggests racism, then perhaps the fact that it’s directed by a cis-white male, and contains mostly white leads with dancing non-white actors in the background, will,” Rivera said in the letter.

On January 23, the International Cultural Studies program hosted a public forum at the East-West Center’s Burns Hall for the directors to discuss the process of the play.

Approximately 50 faculty and students, including some of the play’s cast members and Rivera attended the public forum.

Though there were questions in regards to the play’s plot, other questions arose about cultural appropriation and the comfortability of the cast members playing Indian roles and performing dances.

Company actor for the Honolulu Theatre for Youth Christina Uyeno asked how production is dealing with the public asking questions about some castmates who play Indian roles.

“I appreciate the putting forward of Indian culture and the care that goes into it, but we then take a piece of art and all that work and stick it into a community, who all they will see in the end of their day–I’m sorry–are white actors playing ‘Bollywood,’” Uyeno added at the public forum. “Which is such a gross understatement to all this work that’s been happening, but this is a conversation that needs to be happening.”

Bhatawadekar replied that theater as a whole is male-dominated, but she expressed her gratitude about working alongside Mitri to provide an educational platform for the UH community.

UH Mānoa student Alex Miller said at the public forum that he heard some cast members were concerned about Indian dances.

Christine Lamborn, who plays Tarana, said the people who worked on the play have knowledge and training in different South Asian and Indian styles. She added that anytime she had an issue with movement, she would go to Bhatawadekar.

“We want to put together the best piece we can, and be respectful of the different South Asian cultures that we are putting together in this melting pot,” Lamborn said at the public forum.

The idea of the play was pitched in spring of 2018, following production in the summer last year.

Mitri said approximately 50 people auditioned for the roles, of whom 37 were cast. The cast is a mix of undergraduate and graduate students, students from nearby communities and one high school student.

Mitri added that it is a normal casting process. The people who auditioned were given lines from Shakespeare with a requirement to sing and dance.

“If you want the role you have to win the role, nothing is given to you,” Mitri said, “For some of the roles, you could see that some of the students really wanted those roles and they worked really, really hard for it.”

Mitri added that there are about 19 speaking roles and that the play is an ensemble where all lines are shared equally throughout the two and half hour long performance.

“To me, ensemble is important,” Mitri said. “It’s about teamwork.”

Rivera, who attended the public forum disagreed with the play being an ensemble.

“It’s images of exoticism, and even though they said there are no lead roles, there are,” Rivera said. “If people of color don’t have the opportunity to play lead roles, then we’ll always be kept in the ground.”

Qalil Ismail, who plays Bak-Bak and is one of the castmates who is a person of color, said he’s heard the comments and concerns about the play’s early production.

“I’ve heard a lot of people thinking we’re appropriating and stuff like that, and I really don’t think that’s the case,” Ismail said. “I think that a lot of people were worried about the lens itself being put on, and I think that it’s in the setting we’re in. Like I said, it’s anti-racist.”