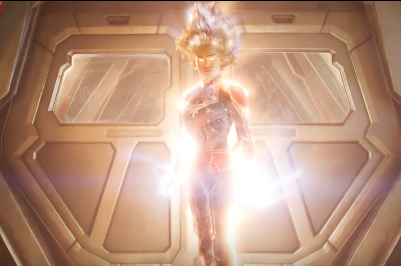 Captain Marvel is the MCU’s first standalone movie with a female lead.

To put simply, Captain Marvel is one of the most underwhelming Marvel titles to date.  The story, characters and action sequences are all boring. The film doesn’t do anything new as far as superhero movies go and the few things it does do, it does half-heartedly. That is not to say that it was terrible per se but it is far from anything impressionable. And considering how many titles Marvel has under its belt at this point, it's hard to accept that this was the best end product they could present.

The first act of the film sets up the premise to play out like a reverse superhero-origin story. Captain Marvel, played by Brie Larson, already has a small portion of her powers, but due to a case of amnesia, has to rediscover herself as she learns to hone her gifts.

However, it never feels like she goes on this journey of personal discovery. Even by the end of the movie, it doesn’t feel like Captain Marvel has developed as a character in the least. This is due in part to the writers, who never gave her any sense of a grounded character to begin with.

The only aspects of her character worth noting were her occasional sarcastic and spunky jokes. But these quirks don’t make Captain Marvel a believable nor developed character so much as they make her a talking head for one-liners.

In the second act, she is a bit more enjoyable to watch in her interactions with Samuel L. Jackson as a young Nick Fury. Their relationship throughout the movie plays out like a superhero/buddy cop relationship, which admittedly was quite entertaining. Captain Marvel as a stand-alone character is just not developed enough. It is in situations where she is able to play off her supporting cast that her character shines.

All things considered, Brie Larson’s acting was not the main problem of her character’s poor execution. Her delivery and overall performance was awkward in some scenes, but this could be attributed to her inexperience with this type of role. Larson is not a terrible actress; given time she might be able to get more of a feel for the type of charisma superheroes are supposed to convey on screen.

The overarching problem is that the writing in this movie was substandard at best. The only times we learn something about Captain Marvel’s personality that don’t involve the use of one-liners are through forced exposition from other characters, which is just lazy storytelling. When the main protagonist is poorly written, as is with this movie, it's difficult to have your audience invested.

As far as action in a Marvel franchise title goes, the fight sequences were uninteresting. With all her amazing powers, the movie manages to make Captain Marvel boring to watch in fight scenes. Almost every instance of combat involving her powers can be broken down as: Captain Marvel shoots a plasma beam, bad guys hit a wall; Captain Marvel punches the bad guy, bad guy lands on the floor. Even the final battle of the film falls flat.

Compared to Black Panther, which features some of Marvel’s most dynamic fight scene choreography, Captain Marvel misses the mark in this department.

Another minor problem with the movie was its dependency on '90s references for humor. While there are some jokes that warrant a chuckle, you can only get so far with mentions of Blockbuster and dial-up internet jokes.

Overall, Captain Marvel was disappointing, but not enough to hate it. The movie just did not warrant feeling fully invested in the story or the characters. Additionally, for a superhero movie, the fight scenes were stale.  The visuals and occasional good joke, however, were enough to keep me in my seat and watching. With that being said, it's unfortunate to report that Captain Marvel’s debut to the Marvel cinematic universe was just “okay.”