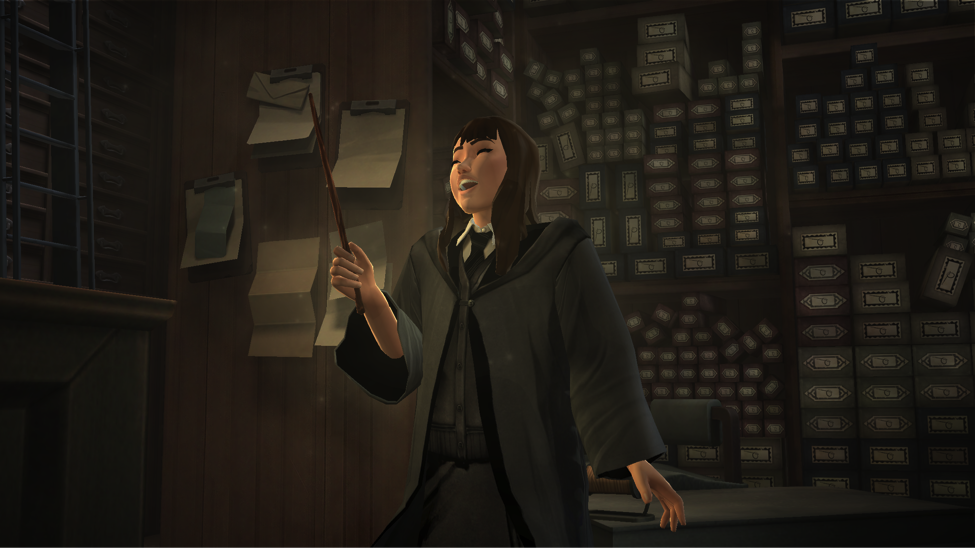 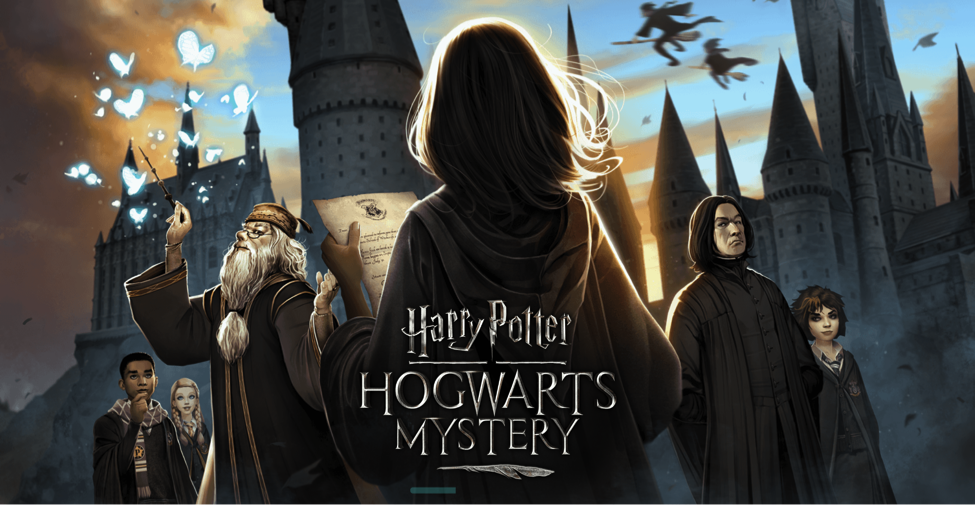 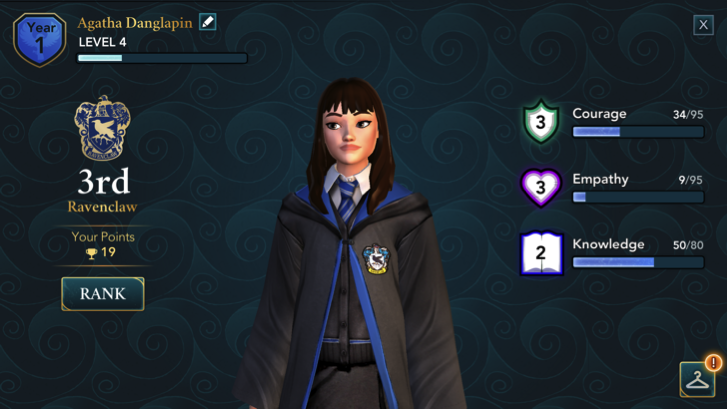 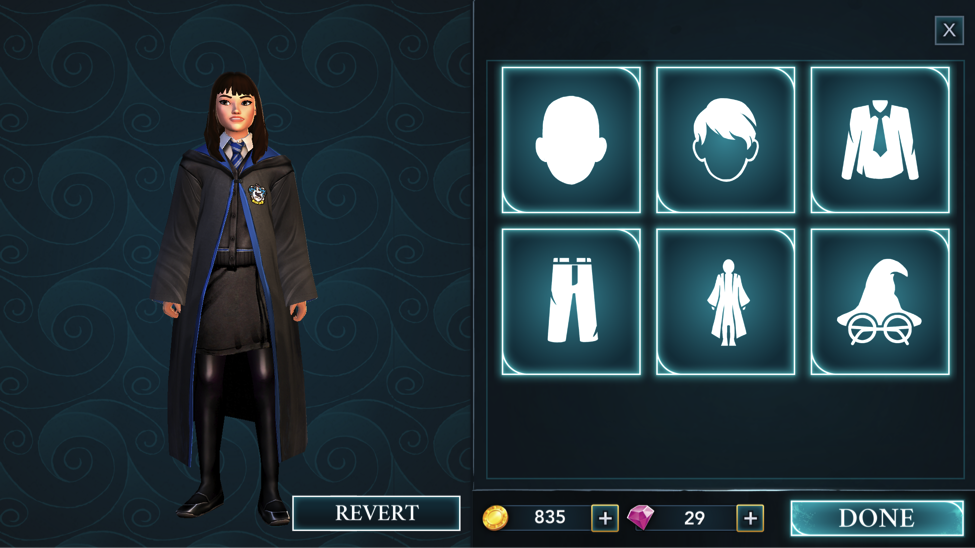 The player customization page can be accessed at any point in the game, so there is no need to stress if you do not like the appearance of your character during the initial creation. 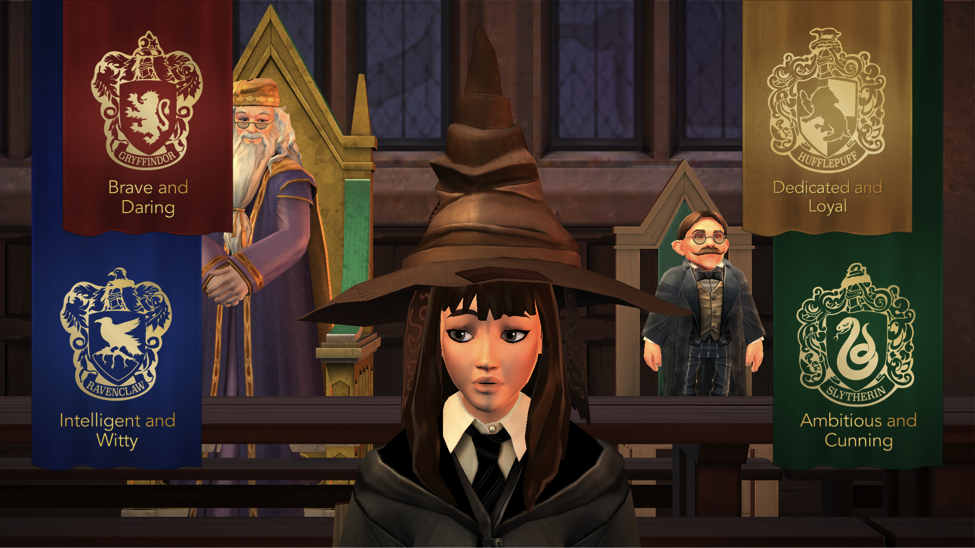 Players can choose what house they prefer to be in, unlike its Pottermore counterpart, where players must take a short quiz to determine the best fit.

The “Harry Potter” franchise has seen many successes, from the book series to the movies to theme parks and video games on console. Now, game developers Jam City hope to reach the same successful transition with mobile devices in“Harry Potter: Hogwarts Mystery,” which launched on April 25 on iOS and Android for free.

This role-playing game (RPG) is set years before Harry Potter’s admission into the school of witchcraft and wizardry. Players will begin their journey at Diagon Alley, a hidden wizarding alley and shopping area commonly visited by Hogwarts students to purchase their school supplies. There, players experience getting their first wand at the renowned Ollivanders wand shop and familiarize themselves with the game’s interactivity. “Hogwarts Mystery” is a game that spans through all seven years at Hogwarts. Each have chapters and objectives to complete before advancing to the next year. Players begin their journey as a first-year 11-year-old student. Players learn new spells, play quidditch, participate in class, form relationships and immerse themselves in their own story.

Before starting off in Diagon Alley, players will have to create their own customized avatar. Players can choose to play either a witch or wizard and can choose between various facial features and hairstyles. When first customizing an avatar, players are given a limited choice of hairstyles. More can be unlocked as the player levels up throughout the game. The same will apply for other cosmetic items such as tops, bottoms, hairstyles and jewelry. With the ability to earn in-game coins and gems throughout the game, they can be used to purchase more hairstyles and items. But as a beginner, you will not find yourself buying these new items anytime soon.

Unless you have the cash. 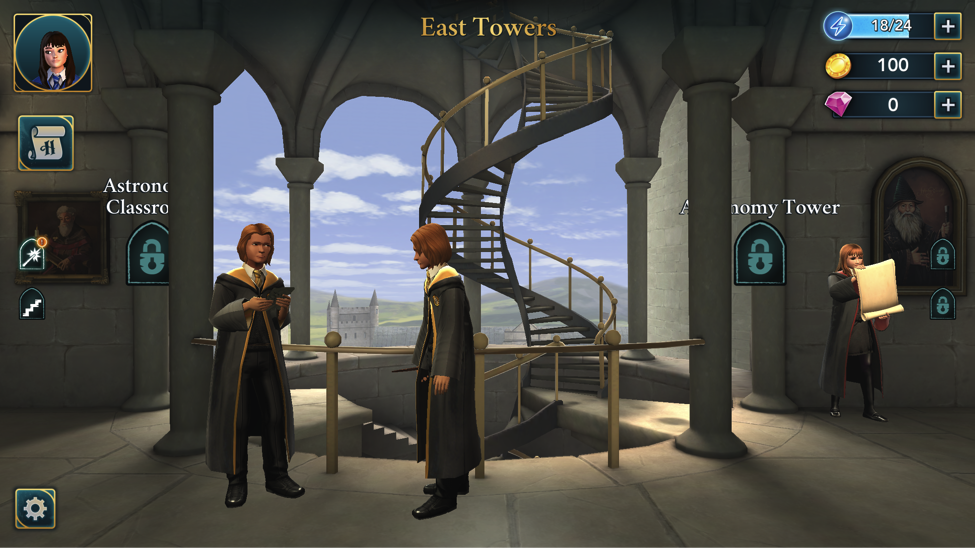 Players can swipe to slide left and right. Tapping on icons will lead you through various locations of the castle. 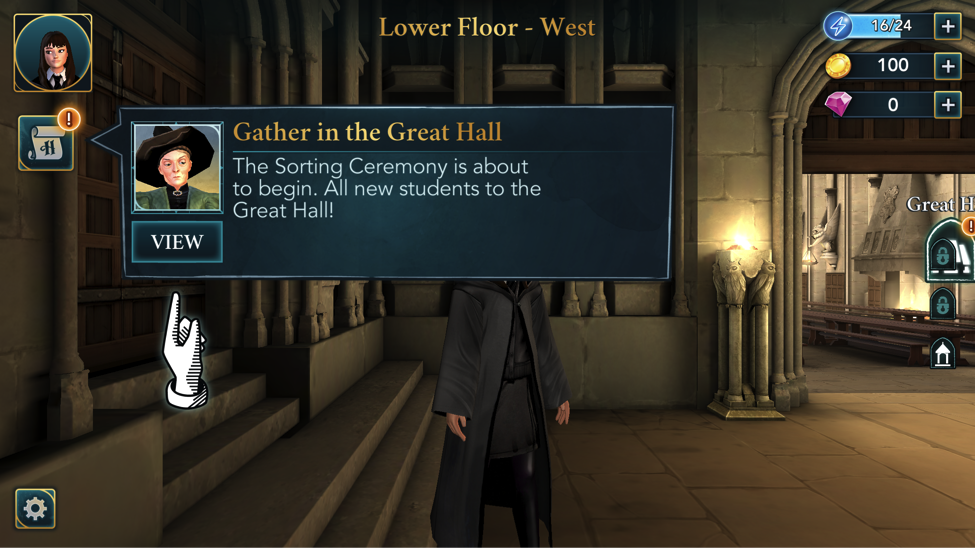 As the story progresses, objectives appear to indicate where to go next and what needs to be completed.

Players can swipe to slide left and right. Tapping on icons will lead you through various locations of the castle.

As the story progresses, objectives appear to indicate where to go next and what needs to be completed.

While players cannot command avatar movements, the game opted for a feature that allows players to slide left and right to view their surroundings and interact with objective items, characters and entryways. While players are allowed to freely explore the castle, certains areas will remain locked until the player further progresses in the game.

The game’s overall interface is simple and resembles many mobile games, making it easy for players if they have played wait RPGs similar to popular games like “The Sims FreePlay,” “Zombies Ate My Friends” and “Kim Kardashian: Hollywood.”

Similar to these other mobile games, objectives require actions that require energy and energy takes waiting time, leveling up or real-money purchases to fill the energy bar. This can be discouraging for some players who are eager to continue the game. 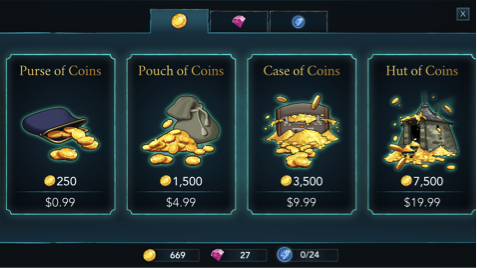 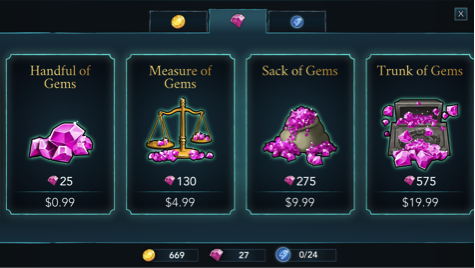 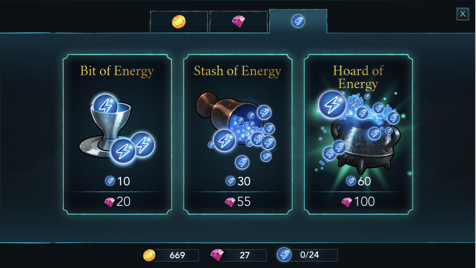 While this is a free game, Jam City offers in-game purchases to drive in more revenue for the free game. The developers implemented this system to provide an easier, but pricier route to advancing in game. These purchases will buy more energy time and other cosmetic desires. 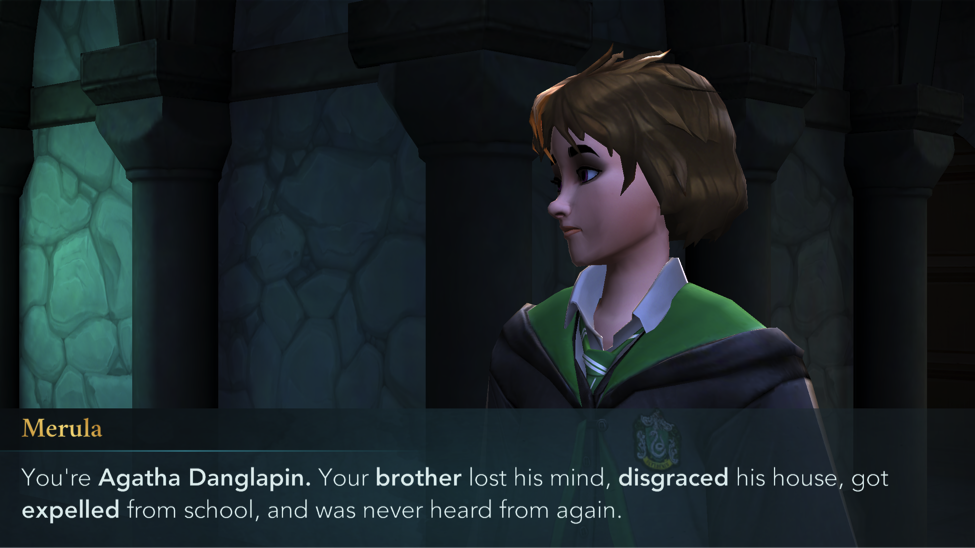 Throughout the game, your character will meet both friend and foe. Interactions with each will determine friendship levels and house points. 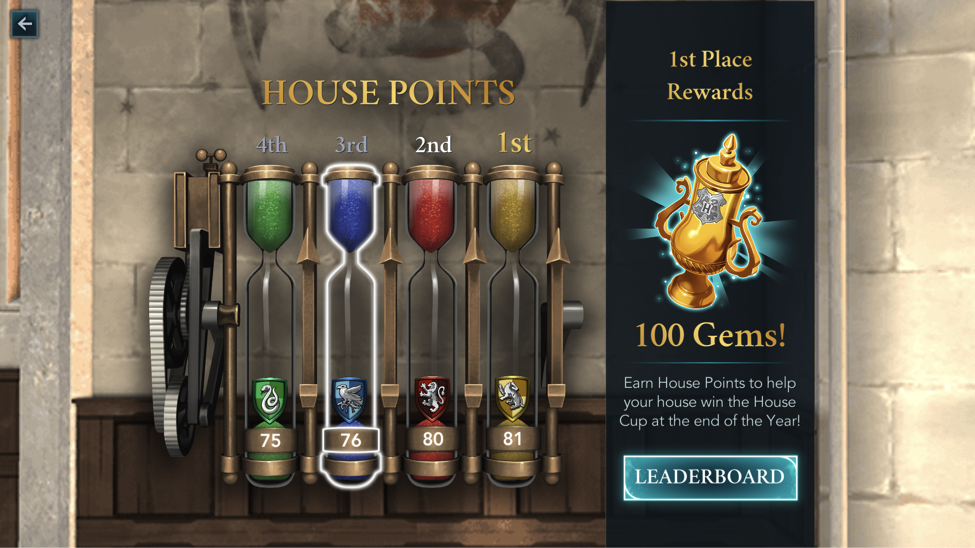 House points are LIVE points totaled from all players.

Throughout the game, your character will meet both friend and foe. Interactions with each will determine friendship levels and house points.

House points are LIVE points totaled from all players.

In this game, decisions matter and they pave out a character’s storyline. In the beginning of the game, the player is introduced to their family’s backstory and the possible drama that may follow the character throughout the game.

Actions, responses and how well you do in activities will determine the outcome of every scenario and affect the overall plot.

Your decisions also matter when it comes to earning house points, another feature Jam City implemented from the original series. In every Harry Potter movie, it always seems that Gryffindor takes home the house cup. But in this game, this is not the case. Points are determined by real-life players and their progress in the game. While this is not a multiplayer app, the points players earn and lose will affect the overall house score, which is seen by everyone playing the game. Players can view the leaderboards to see the how much other players scored for their house.

House points are awarded and taken based on the player’s progress in classes and their responses and actions to other in-game characters.

With other characters, your decisions will affect your character’s relationships and the state of how they turn out. As players get to know their peers, players can level up their friendship by playing games together and eating in the Great Hall. Interactions will not only strengthen the friendship level, but also offer in-game rewards. According to the game, “you can even earn the chance to invite your companions on special adventures.”

While it is not yet clear on whether dating may be an option, players will have to invest time in the game as it does cover a seven-year saga. The choices made will determine the type of relationship that will emerge over time.

After all, Harry Potter did not have his first crush until his fourth year, on Ravenclaw’s Cho Chang. 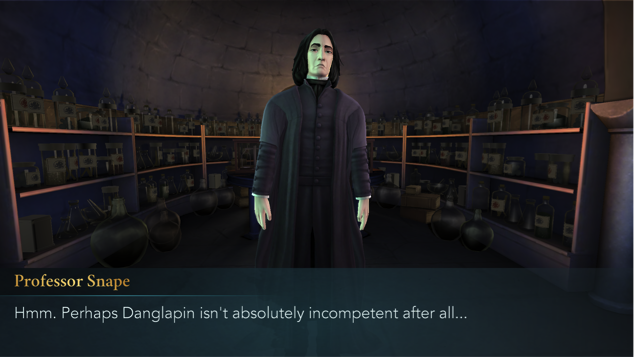 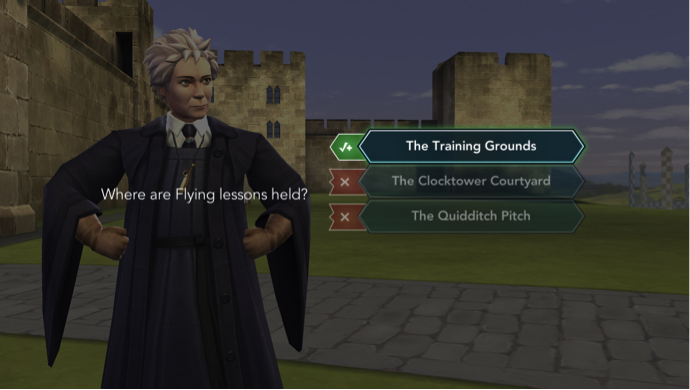 Classes will surprise players with a quick pop quiz question. Luckily, the questions are simple. 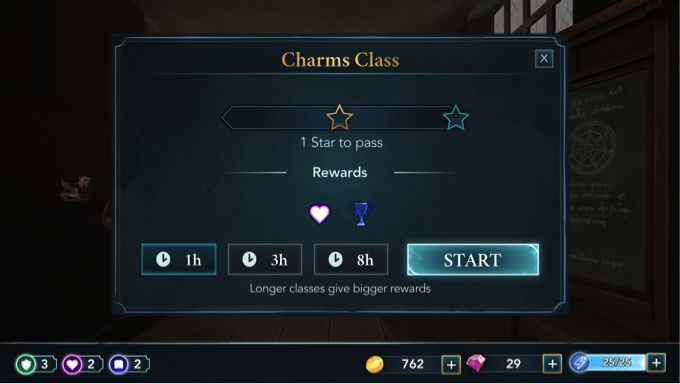 Classes and carrying out their objectives costs time and energy.

School is a thing

Classes will surprise players with a quick pop quiz question. Luckily, the questions are simple.

Classes and carrying out their objectives costs time and energy.

Do not expect to go head to head with a three-headed dog and Voldemort just yet. While the Golden Trio (Harry, Ron and Hermione) were able to battle Voldemort and brave other dangerous mishaps, Hogwarts is still a school. While it is easy to skive off class in college, it is nearly unavoidable in the game. One of the game’s features includes attending classes such as Charms with Professor Flitwick and the charming Professor Snape in Potions. Classes offer opportunities for students to learn new spells, gain and lose house points, gain character attributes and advance in story. But they also require energy when completing objectives in class.

Do pay attention – the teachers will throw a quiz question at you from time to time to see if you are paying attention. If you are Harry Potter fan, these questions should be common sense. If not, do not worry. The questions are easy and having prior knowledge of the Harry Potter series is not necessary.

While making choices advances and shapes a character’s story, players will have to level up their character’s attributes as well. Courage, empathy and knowledge are the three attributes to level up. Certain activities such as going to Potions and Charms will level up certain attributes. Certain responses given will also contribute to the system.

With the popular series’ name attached, “Hogwarts Mystery” will definitely cause a buzz for the curious and the veteran fans. Although your choice in what house you prefer is taken into account, it is surprisingly disappointing that players can choose what house they are sorted in, unlike how in “Pottermore,” players are surprised, angered and pleased by the results of the quiz the sorting entailed. While this was not the massive multiplayer online role-playing game (MMORPG) that many hoped for with its time wait and cash grabs, the game was all still in good fun and will be something to see through with its intriguing backstory and plotline.

For a mobile app, the game was immersive and had many features despite being in its vanilla stages due to the recent release. Though inevitable future updates will add more to the game, it does raise questions as to what else there is to expect once a player finishes all seven years at Hogwarts.