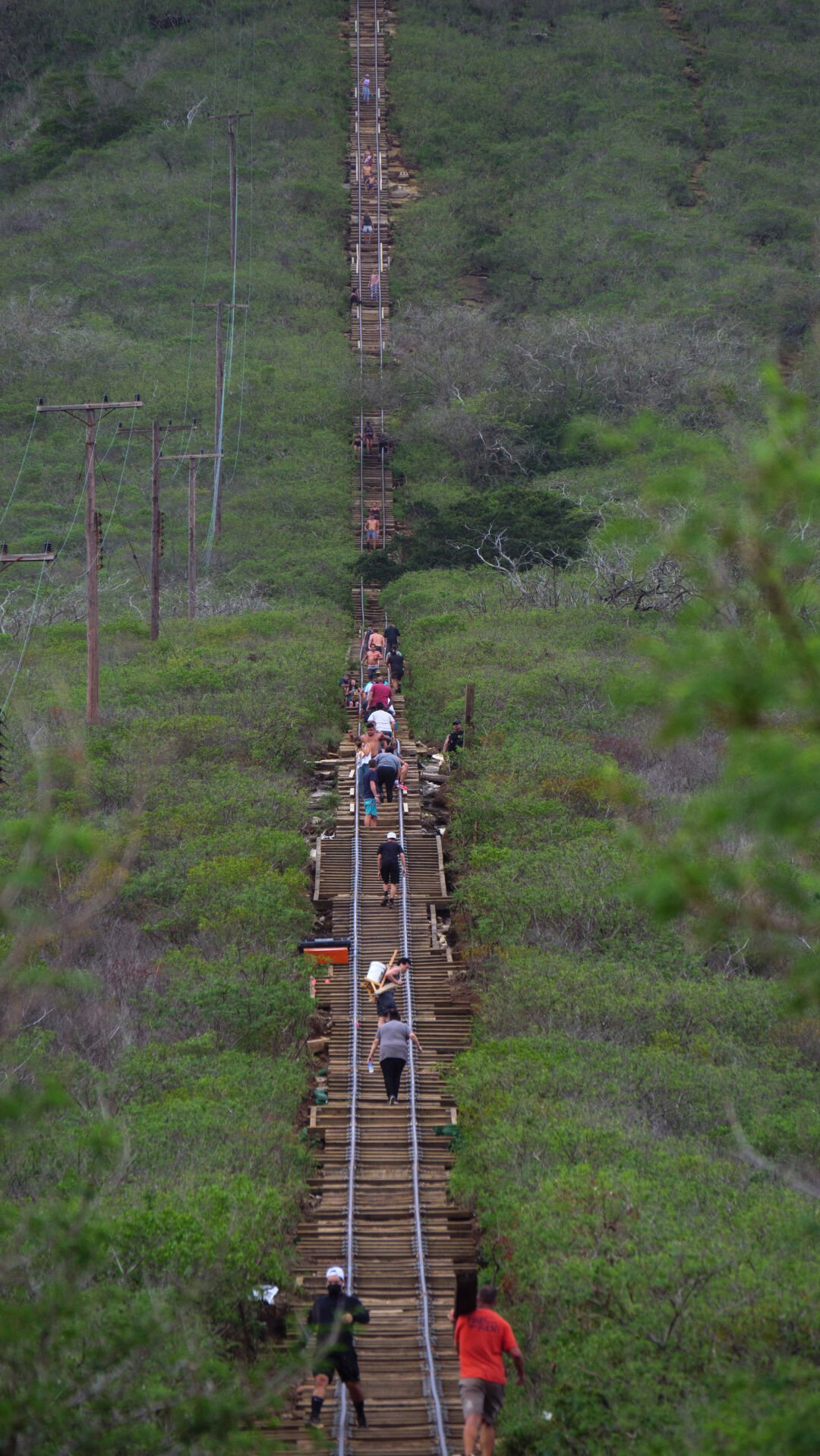 Volunteers help rebuild the trail by bringing supplies halfway up the Koko Head Stairs while hikers pass by on their way to the top. Hawaiʻi Kai, Hawaiʻi. 01/26/2021 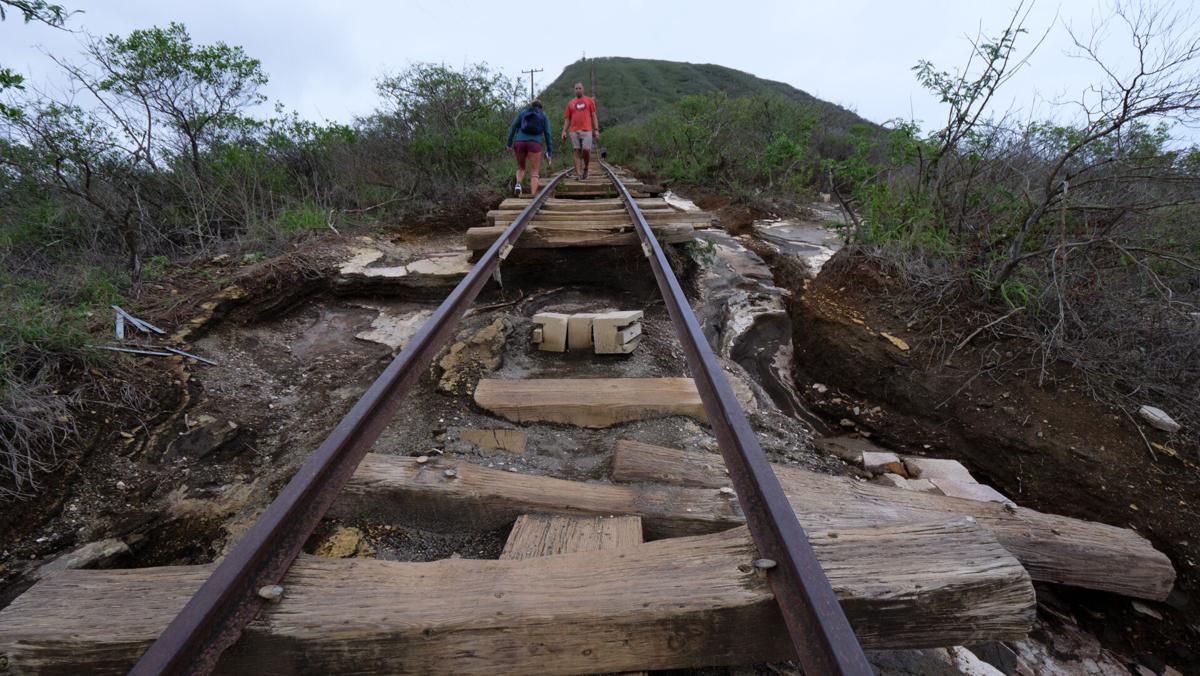 Hikers are seen passing by each other on a section of the stairs that are severely weathered down from erosion and overuse. Hawaiʻi Kai, Hawaiʻi 01/26/2021 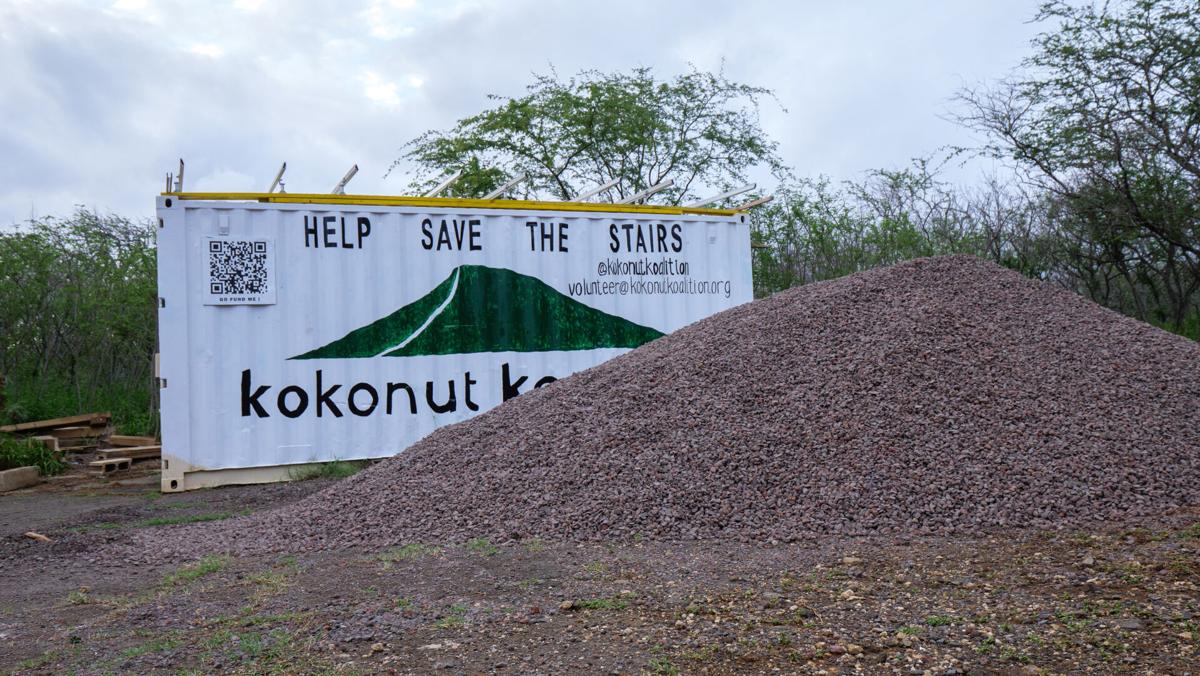 A shipping container housing supplies and a mound of gravel sits at the bottom of Koko Head near the start of the trail. The outside of the shipping container has information about the “Save the Stairs” initiative organized by Kokonut Koalition. Hawaiʻi Kai, Hawaiʻi 01/26/2021 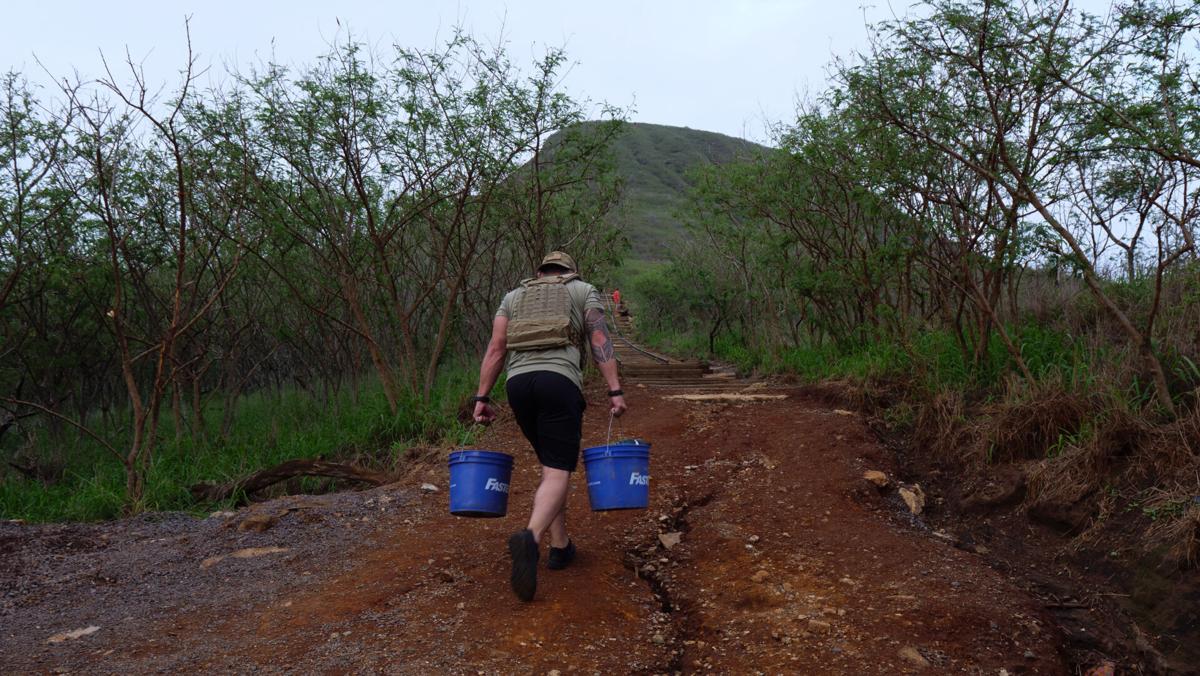 A volunteer carries two buckets filled with gravel, makes his way up the trail to continue the pouring of gravel in between the rail ties. Hawaiʻi Kai, Hawaiʻi 01/26/2021 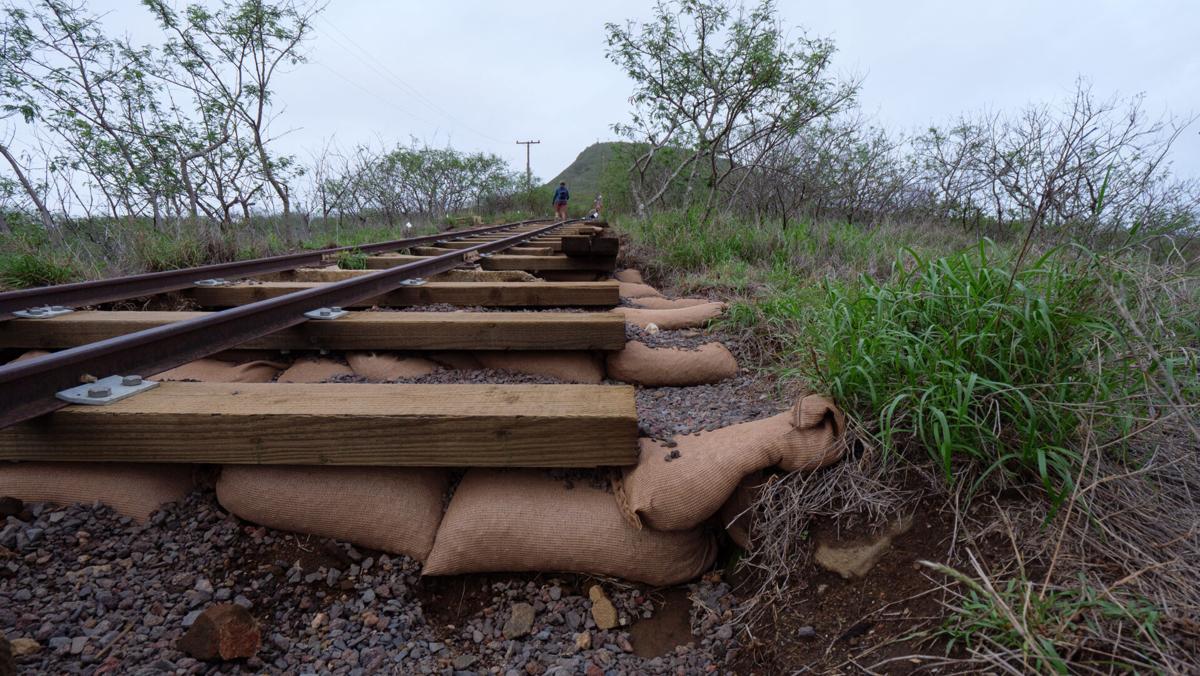 New rail ties are added to the rails with sandbags laid beneath them along with gravel in hopes of repairing and preserving the stairs. Hawaiʻi Kai, Hawaiʻi 01/26/2021 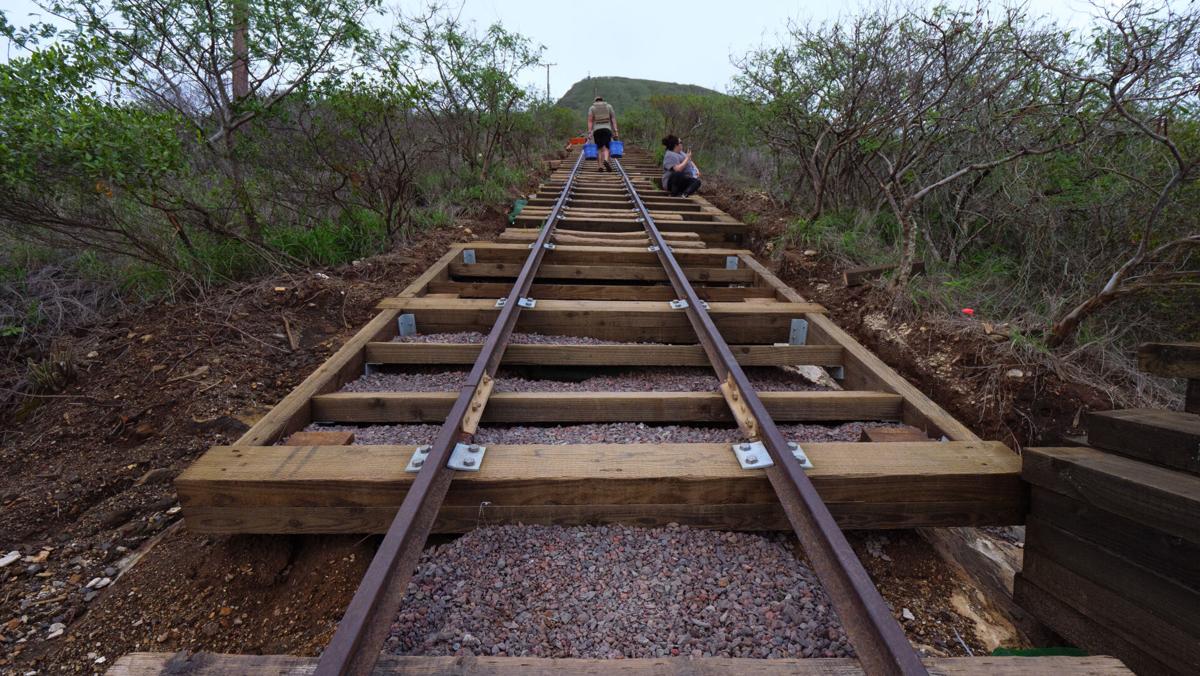 Another section of the stairs showing the extent of the new rail ties installed underneath the rails along with gravel filled in between to add to the support. Hawaiʻi Kai, Hawaiʻi 01/26/2021 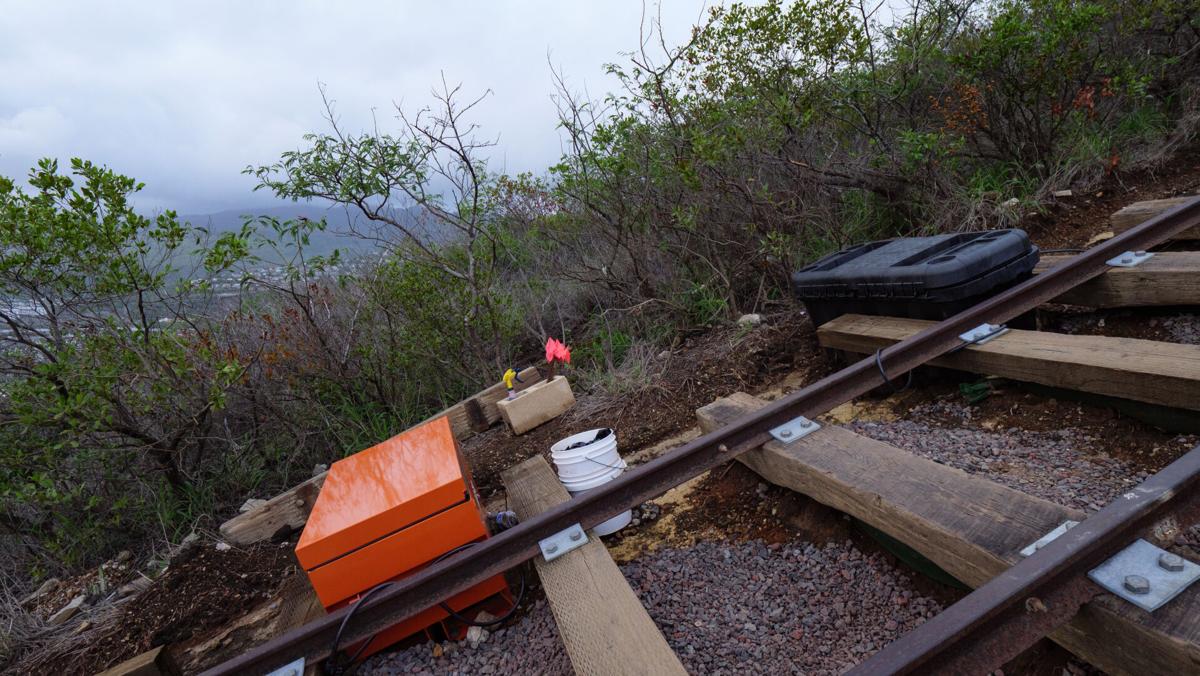 Tools and bins off to the side of the Koko Head stairs for volunteers to use for another day. Honolulu Hawaii. 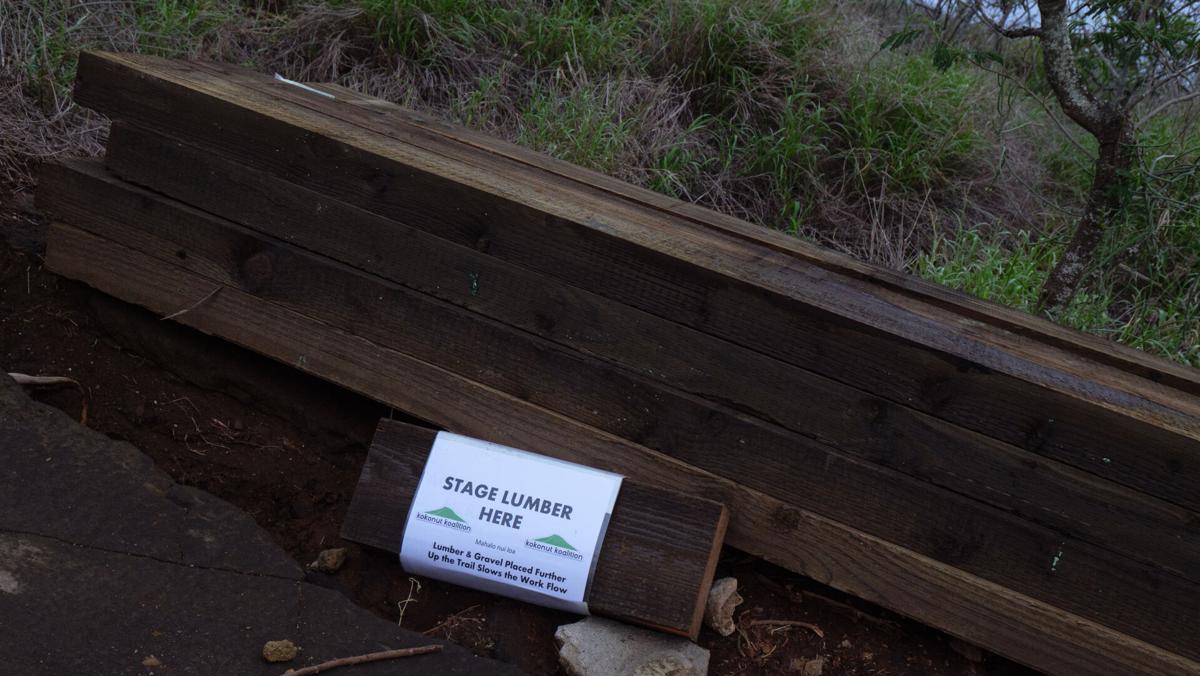 Stacked Lumber station halfway up Koko Head Stairs to be used by volunteers in the days to come. Honolulu Hawaii.

Oʻahu is famous for many things: its world renowned beaches, Waikīkī and, of course, the hikes with spectacular views of Koʻolau, Diamond Head and other picturesque ridges. One hike that attracts tourists, locals and college students in particular is the Koko Head Crater Trail, or Koko Head for short.

Many UH Mānoa students can be seen enjoying the 1200 foot tall “staircase” and the challenge the trail provides. Sometimes referred to as the “Stairmaster from Hell,” Koko Head Crater has 1,048 stairs and is approximately a half mile straight up the crater.

According to Civil Beat, the Koko Head Crater Stairs, or tracks, were built by the U.S. Army in 1942-1943 to accompany a radar station that used the tracks for a tram system that took personnel and supplies up to the top.

After the end of the Second World War, the U.S. Army transferred occupation of the crater to the U.S. Air Force, particularly the 169th Aircraft Control and Warning Squadron of the Hawaiʻi Air National Guard. In 1966 the ownership was returned to the City and County of Honolulu, where the area was turned into what is now called Koko Head District Park.

Even though ownership of Koko Head was transferred to the City and County of Honolulu, the heavily visited trail is at the mercy of erosion and overuse with little maintenance from the city. With the trail seeing many visitors everyday, the stairs have become unstable and brittle.

It was when avid hikers of Koko Head became concerned about the condition of the stairs that a volunteer initiative called Kokonut Koalition was born. The nonprofit organization was formed by unpaid volunteers and was founded in 2018 for the sole purpose of “protecting, preserving and rehabilitating”the well traversed trail. As stated on their site, they“partnered with the City and County of Honolulu to implement emergency temporary repairs to the stairs.”

Lena Haʻapala, a board member of Kokonut Koalition and one of the early members of the initiative, said she has frequented Koko Head for years, among other hiking trails. She said when she first encountered some of the early founders of this initiative on the trail, it was only an idea.

Haʻapala said getting the ball rolling on the restoration of the stairs was a challenge. “It was just a hard, long process. Frustrating process,” she said. The process involved 2 years of meetings with council members, the Department of Parks and Recreation, and the mayor.

Once they were given the green light to begin the project, it proved to be a physically demanding endeavor as Kokonut Koalition members began carrying large pieces of lumber, buckets of gravel and various tools up the stairs.

However, Kokonut Koalition has seen a keen interest from the community in restoring the stairs.

“Over the next 6 months to 1 year, we will be organizing community volunteers in the largest public works program in the history of the state,” their website reads. Volunteer days are every Saturday from 7 a.m. to 1 p.m. and volunteers can sign up and read more about what the day entails on their site.

Companies have donated their time and resources to the initiative. On a recent volunteer day, a contracting company, volunteered their carpenters and tradesmen to expedite the process.

Kokonut Koalition members can be seen in their bright yellow shirts on Saturdays.

Haʻapala went into depth on what they do to restore the stairs, particularly the physical aspect.

“The actual physical labor portion of the work, well we have our main crew which is most of us are part of the board, we're board members of the non-profit and so we actually build the stairs and replace the ties,” Haʻapala said.

The process of restoring the stories is tedious and requires many different people to restore one beam at a time.

“So lining it up, measuring, making everything is square and actually installing the ties removing old ones if they need to be removed replacing it with a new tie and making sure, yeah, everything is in there nice and secure and then the other parts are filling in the areas that need to be put with gravel or gravel bags,” she said.

In addition to manpower, there is also a need for supplies. The supplies were first funded and provided by the city, though the resources quickly dried up and the board members now rely on fundraising and donations.

As the initiative is a continuing project, the pandemic has slowed their progress.

“When they shut it down, our process with the city slowed down. Everything was pushed back, everything was on hold. We had some things delivered but at one point the trail was shut down for three months so we couldn't do anything,” Haʻapala said.

Their hopes were to finish the project in under a year but after the slow down due to the pandemic they predict to finish by the end of the year.

“If we had the supplies, like we didn't have to wait around, and the man power, we probably could get done in less than a year,” she explained.

Along with the closure of the trail during lockdown, additional aspects such as lack of supplies and funding, and delayed shipments have extended the project’s end date.

“The initial supplies came from the city and now that we have used practically everything up we have to raise our own money to buy the supplies we need unless it's getting donated from a company or whatever, but so that's another thing that slowed us down, that's slowing us down,” Haʻapala said.

However, the community volunteers and the assistance from companies have kept the project alive along with tireless work on the part of the Kokonut Koalition board members.

Because Koko Head remains a well-known trail among Oʻahu’s residents and visitors, foot traffic is not expected to slow. In fact, COVID-19 restrictions in Oʻahu have allowed for outside activities thus requiring a continuing effort to maintain the stairs.

Haʻapala hopes that the city’s Department of Parks and Recreation will aid in maintaining it, but said, “If not, we as volunteers are just gonna keep doing what we need to do, monitor it.”

There are, however, other things visitors or avid hikers can do to preserve Koko Head that don’t involve the heavy lifting of gravel and ties up the stairs. Haʻapala reminds everyone to keep the trail clean.

“Definitely be prepared with your water. Take care of your trash. Be mindful and respectful of other people,” she concluded.