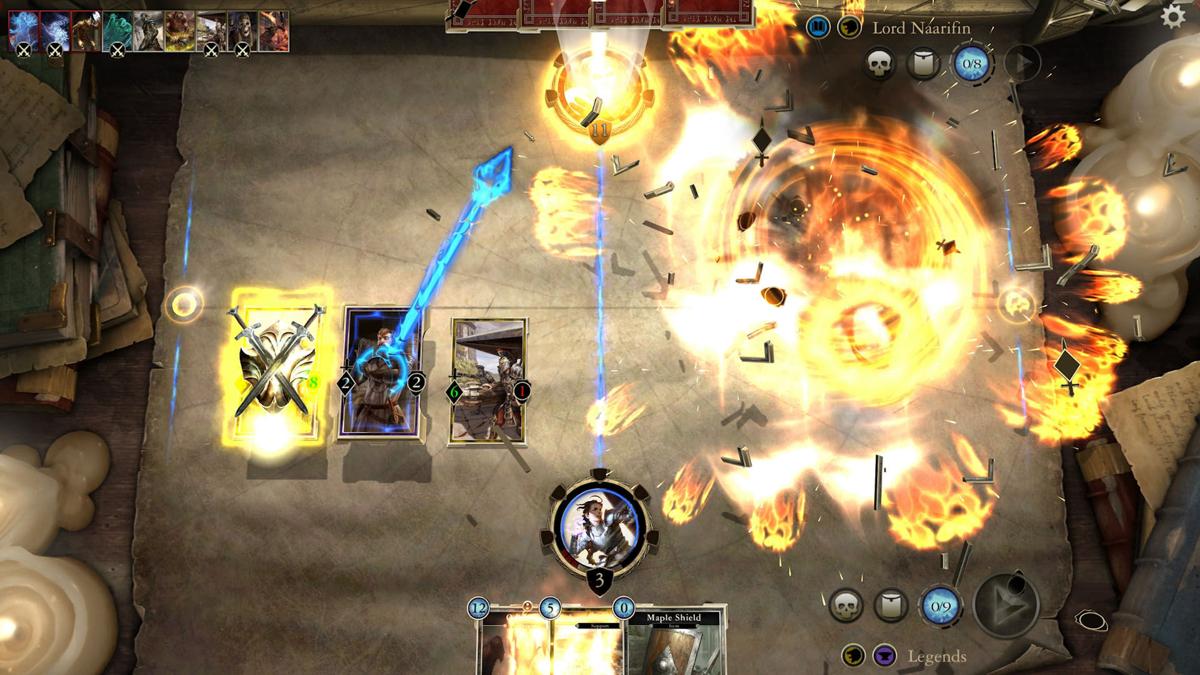 “The Elder Scrolls: Legends” takes characters from the high fantasy world of “The Elder Scrolls” series and incorporates them into the realm of an online custom combat game (CCG). Like other collectible card games, “Legends” focuses on deck-building, seeking out valuable cards and making strategic choices to defeat the opponent. Though the game has some issues regarding story, its gameplay mechanics, audio and visuals are enough to make a player keep coming back for another match.

The main storyline for “Legends” is simple enough, but its delivery in the game is scattered and often confusing. The main character, the hero, must fight against the evil plans of an elf, Naarifin, while accompanied by companions, such as Tyr and Swims-at-Night. Every time the player defeats a stage, the story progresses with a short cutscene that moves the plot along.

There are many times when the story seems rushed, as the player needs an excuse to get into battle after battle. Additionally, it can be difficult to keep track of where the story left off. Fewer cutscenes might help, giving the story time to progress on its own. Additionally, a more detailed introduction to the world of “The Elder Scrolls” series is needed. Gamers who are not familiar with the story world will not recognize referenced places, such as Skyrim.

One thing that is enjoyable about the story is the ability to make choices after select chapters. These choices affect the actions of the main characters and provide various cards based on the choice made.

“The Elder Scrolls: Legends” is easy to play but hard to master. The player starts off with 30 health points and must use cards to bring the opponent’s health down to zero. Gameplay includes deploying cards, using abilities and defeating opposing creatures. One thing that separates “Legends” from other CCGs is the implementation of lanes. The playing board is split down the middle, and creatures may only attack enemies on their side of the lane.

Deck-building and card-collecting can be as simple or as complex as one wants them to be. Players can choose to either use a pre-made deck or create a custom one. There are enough cards to go around, giving gamers who enjoy customization the ability to spend hours making a totally one-of-a-kind deck that has synergy.

Graphics in “The Elder Scrolls: Legends” is a mixed bag. The cards are beautiful and have fitting animations for their abilities. However, the cutscenes in the story mode look stale and are lacking in movement. Regarding sound, the cards have unique voice animations and sound effects, and the story is accompanied by realistic narration and voice acting.

“The Elder Scrolls: Legends” is free-to-play and currently available on PC, Mac and the App Store and the Google Play Store for tablets. The game is coming soon to mobile. “Legends” has in-app purchases to buy card packs and additional story modes, but those are not necessary to enjoy the full game. Overall, “Legends” provides the complete experience of a collectable card game and infuses it with interesting mechanics.