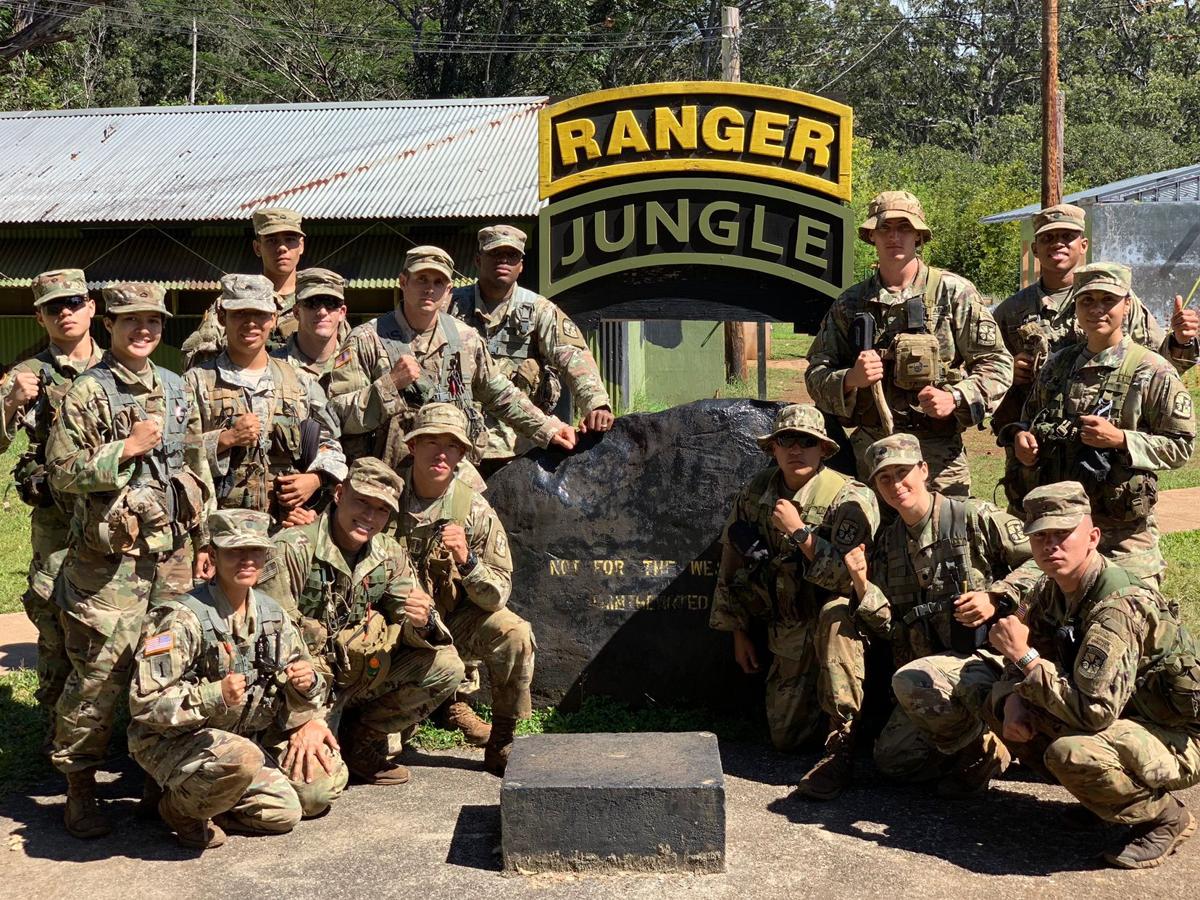 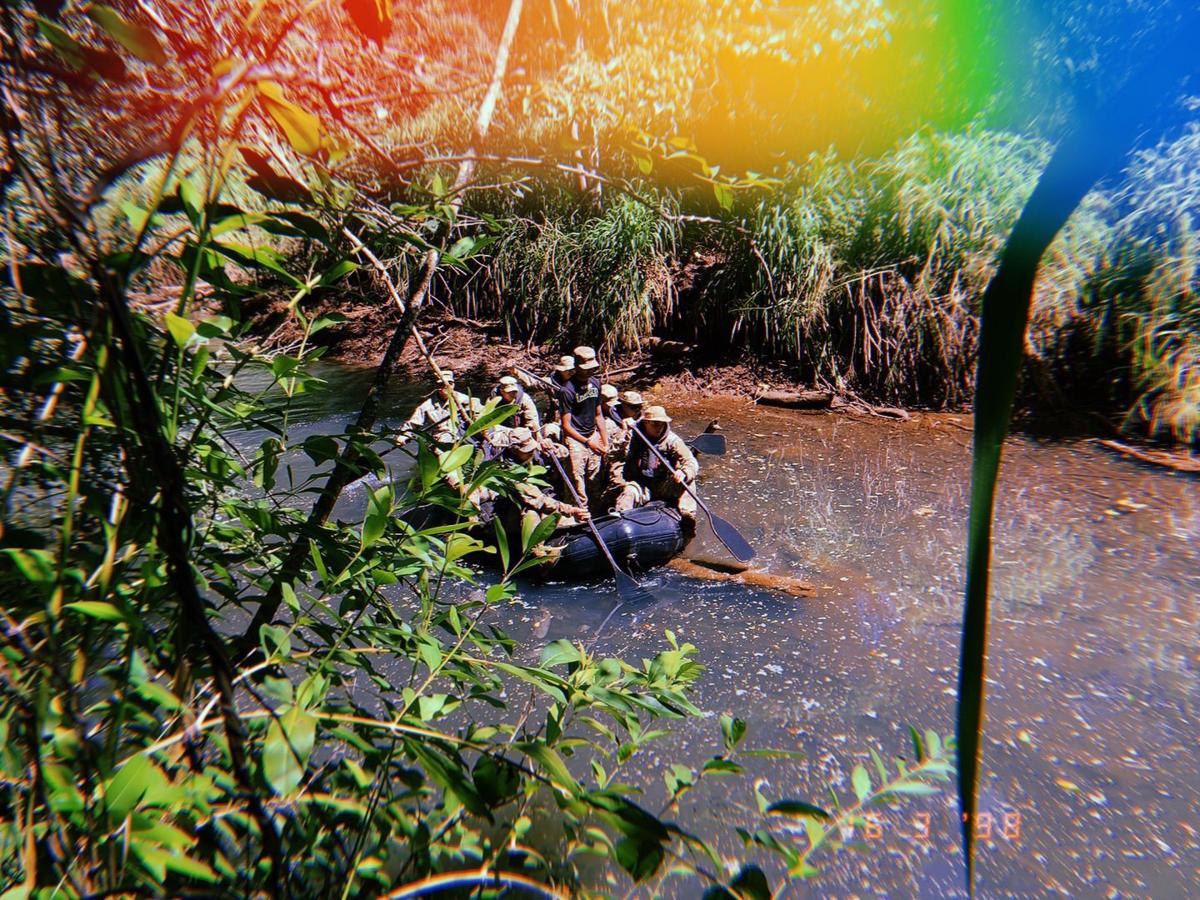 The ranger challenge team doing zodiac training, rowing up and down a river at the Jungle Operations Training Center at East Range, Wahiawā, HI. 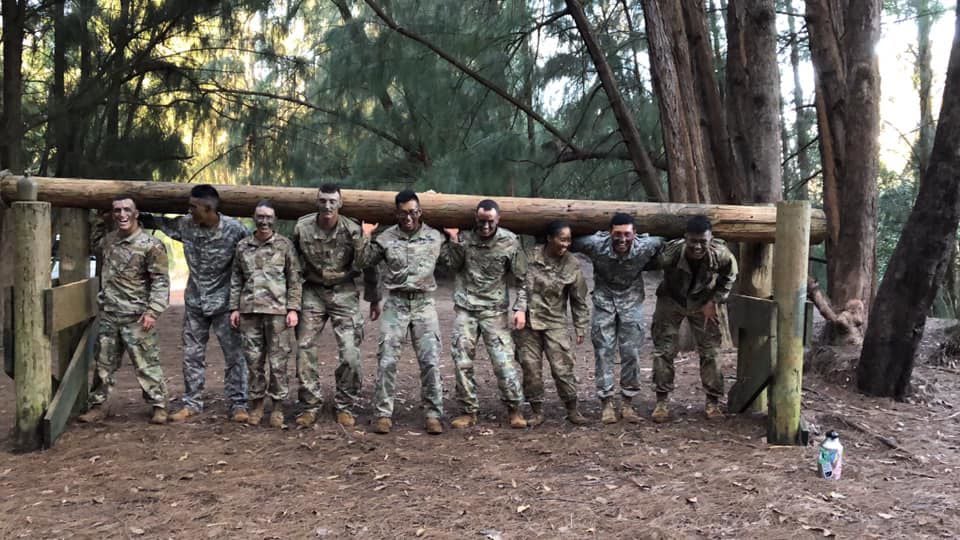 The ranger challenge team having fun after finishing an obstacle course at East Range, Wahiawā, HI.

The team will head to Collegiate Nationals for a two-day challenge starting April 12 for the Sandhurst Competition on the grounds of the U.S. Military Academy at West Point in New York.

This is the first time in 10 years that UH Mānoa’s ROTC crew took first place at a regional competition, beating out 11 other teams.

The crew won the regional competition at Camp Rilea in Oregon back in October.

Just months later, they placed second in the 8th Brigade Ranger Challenge Competition in January to qualify for nationals.

However, for them, it was not about the accomplishments but the teamwork that brought them together.

In previous years, the ranger challenge was not a year-long program at UH Mānoa. Over the past year, the team set out on creating a better culture for the group.

Team Captain Weng Ong, Brandon Hiehle, Kevin Wilhelm and Kai Chau, who were dubbed “the four horsemen,” are the seniors in the ranger challenge program.

Ong, who is majoring in kinesiology, says the philosophy to keep the team going “all comes from the heart.”

On top of their regular ROTC hours, the team spends extra time committed to training for these competitions. Practices are held four days out of the week from 5:30 to 7:30 a.m.

Hiehle, a graduate student studying diplomacy and military studies at Hawai‘i Pacific University, says the biggest challenge with this regimen is waking up at early hours.For some cadets from the North Shore, they have to wake up at two or three in the morning.

“We wake up an hour earlier than the rest of the ROTC program to go do a workout that’s twice as long, if not 10 times harder than what everyone else is doing,” Hiehle said.

For Ong, the challenges of being captain involve planning different training events, exercises and keeping the team self-sustainable.

“We have such a tight-knit group that it’s easy and very versatile to make changes on the fly for the better of the group,” Ong said.

There are three levels of competition: regional, brigade and nationals. The challenge takes place over a 13- to 26-mile course featuring different events that teams have to complete.

Traversing through rough conditions with over 40 pounds of gear makes it a highly physical but also mental challenge.

“Rucking five miles between event to event as fast as you can with this gear, and throw it all on the floor to do some other extraneous activity, it’s exhausting,” Hiehle said. “But, when you get to see your score and realize we laid it all on the line, it’s a feeling that you can’t really describe until you get to experience it.”

Although they achieved first place in the regional competition, they experienced some setbacks during the brigade competition.

The team had to obtain one of the top three spots in order to move on.

After scraping to get to second place, the mindset for the team heading to nationals is focusing on their process and not looking back on their mistakes in what they like to call “next play focus.”

“Take souls” is the motto Ong and the team live by, which was coined by David Goggins, a retired U.S. Navy SEAL and motivational speaker.

“His whole mindset is what we try to emulate,” Ong said. “Regardless of the pain, regardless of adversity, mentality will trump that.”

The team is set to compete in nationals against 48 teams from other universities, military service academies and international teams.

More than a sport

The competitions are considered a “varsity sport” for the UH Army ROTC, but the horsemen say the group is very different from any other UH Athletics team.

Hiehle says the team does not compete to become professional sports players or earn scholarships, but voluntarily takes part to connect with teammates.

“I have a chance to just wake up and workout with a bunch of people who want to do the same thing I do,” Hiehle said. “The camaraderie that we build is a tighter, stronger bond than any other athletics team.”

Unlike other sports teams, the ranger challenge team makes decisions entirely themselves, rather than relying on their coach.

Maj. Dale Balsis, their coach,  helps organize outside resources, but Ong says all the decisions for the team are based on him and what the team wants.

After the horsemen graduate, they plan on becoming active duty infantry officers for the Army.

They hope to leave the team knowing that they created a better culture so that their juniors can carry on their tradition.

“It’s culture we rely on and we worked extremely hard this semester to breed that mindset,” Ong said.

The horsemen also cherish the skills they have learned in the program and plan to take it beyond the military.

“Because of the culture and the family that has been developed through this, that’s what keeps me going,” Hiehle said.