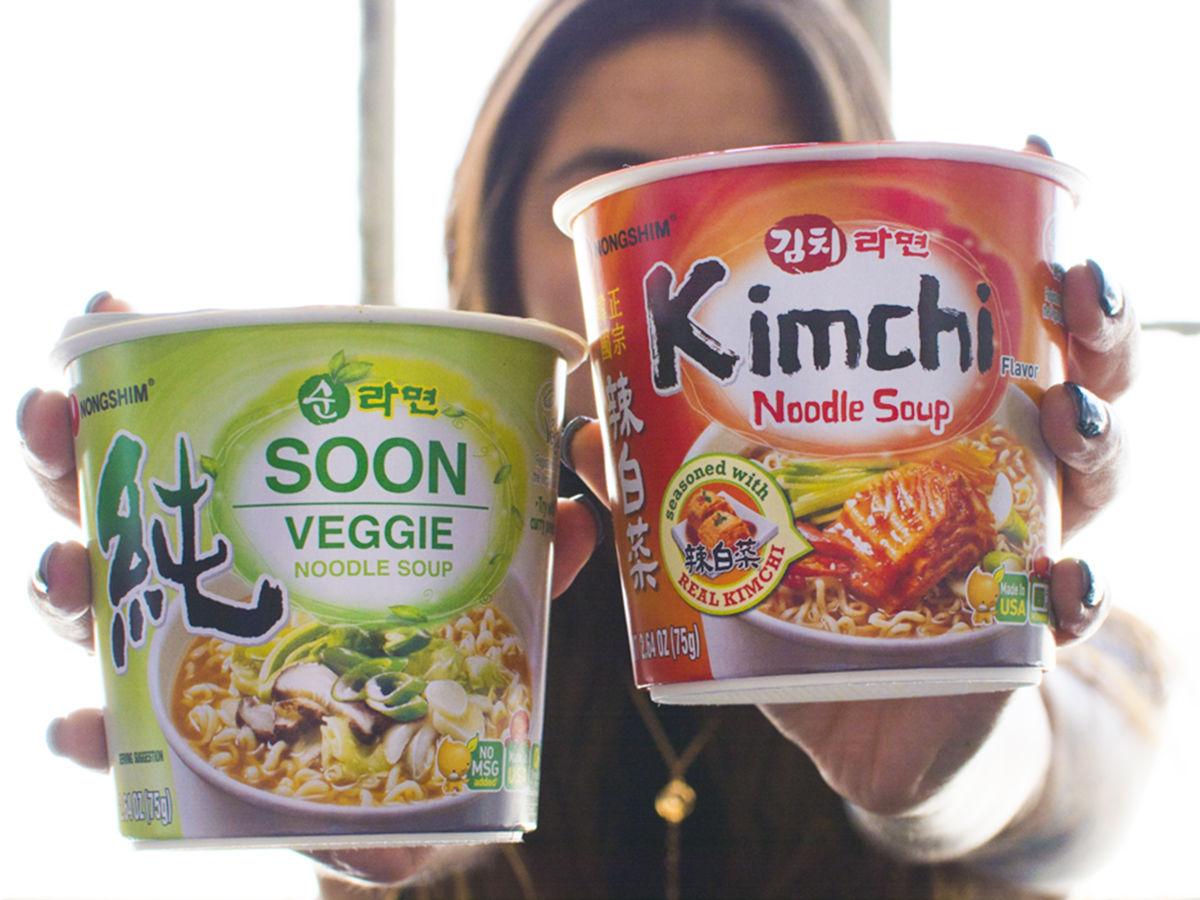 Instant ramen is a college dietary staple. It’s cheap, tasty and easy to make. However, most brands of instant ramen only have flavors suitable for non-vegans. Popular flavors such as shrimp, beef, chicken and pork have animal fat or other animal products. Since they do not consume anything that comes from an animal, vegans may have a hard time finding an instant ramen that they can enjoy.

Nongshim, a popular Korean food brand, has released two types of vegan ramen – the “soon” (meaning “mild” in Korean) flavor, in the green cup, and the kimchi flavor, in the red cup. Vegans and vegetarians can now enjoy the convenience and taste of instant ramen.

Regarding convenience, the vegan version is the same as other instant ramen in a cup. It can be prepared through the microwave or by pouring hot water over the ingredients and letting it sit for a few minutes. The product comes with a serving of dried noodles, dehydrated vegetables and a seasoning packet.

Both of the flavors are as satisfying as the non-vegan versions. Though the texture of the noodles are the same, both the red cup and the green cup are unique. Those who want a spicier ramen will prefer the red version; there are even real pieces of kimchi inside. The green cup has corn and mushrooms instead of kimchi, which contributes to a milder, earthy taste. The noodles are not too soft or too hard when prepared properly, and the amount given is suitable for a heavy snack or light meal.

One drawback of this ramen is that there is a high amount of sodium in one serving. In comparison to another brand that makes cup noodles, it has more salt than Nissin’s beef, shrimp and chicken flavors. Though instant ramen is seen as an unhealthy option, it would have been nice to see this new product cut back on the salt. There are also not a lot of dried vegetables that come with the product. More kimchi, green onions, mushrooms and corn would make the meal more satisfying.

A trick to make up for the lack of toppings is to put in fresh vegetables inside. Bean sprouts, fresh mushrooms and tofu are a few extras that one can add. The soup is flavorful enough to season the extra ingredients. If the noodles are not filling enough, one can also put rice in the leftover soup.

Vegans are getting more options as time goes on, from new brands of vegan ice cream to vegan cheese and faux meats. Nongshim’s vegan instant ramen is a new addition that is good for vegans and vegetarians looking for a quick meal.

▪ Corn and mushrooms give the broth a milder, unique taste