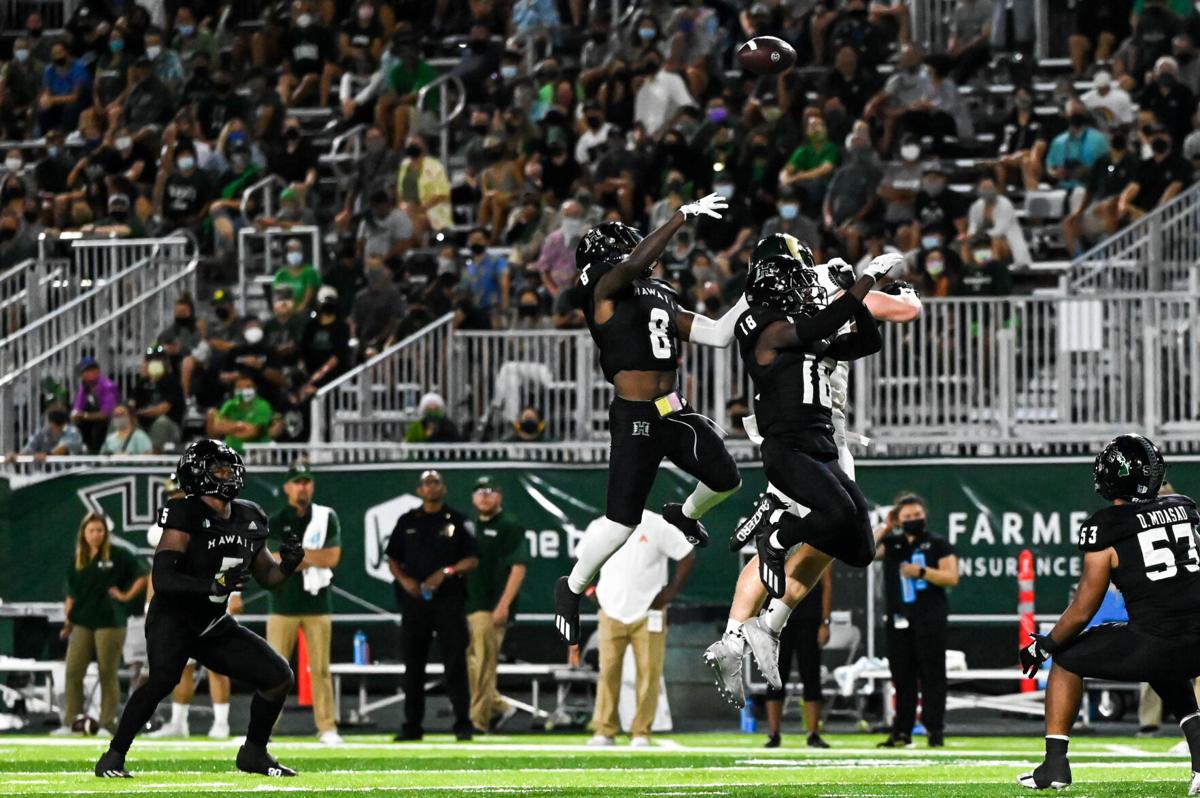 Cortez Davis, #18, tips a pass from Colorado State that Khoury Bethley, #5, intercepted for a Rainbow Warriors turnover during the Bows' 50-45 win over Colorado State on Saturday, November 20 at the Clarence T.C. Ching Athletic Complex. 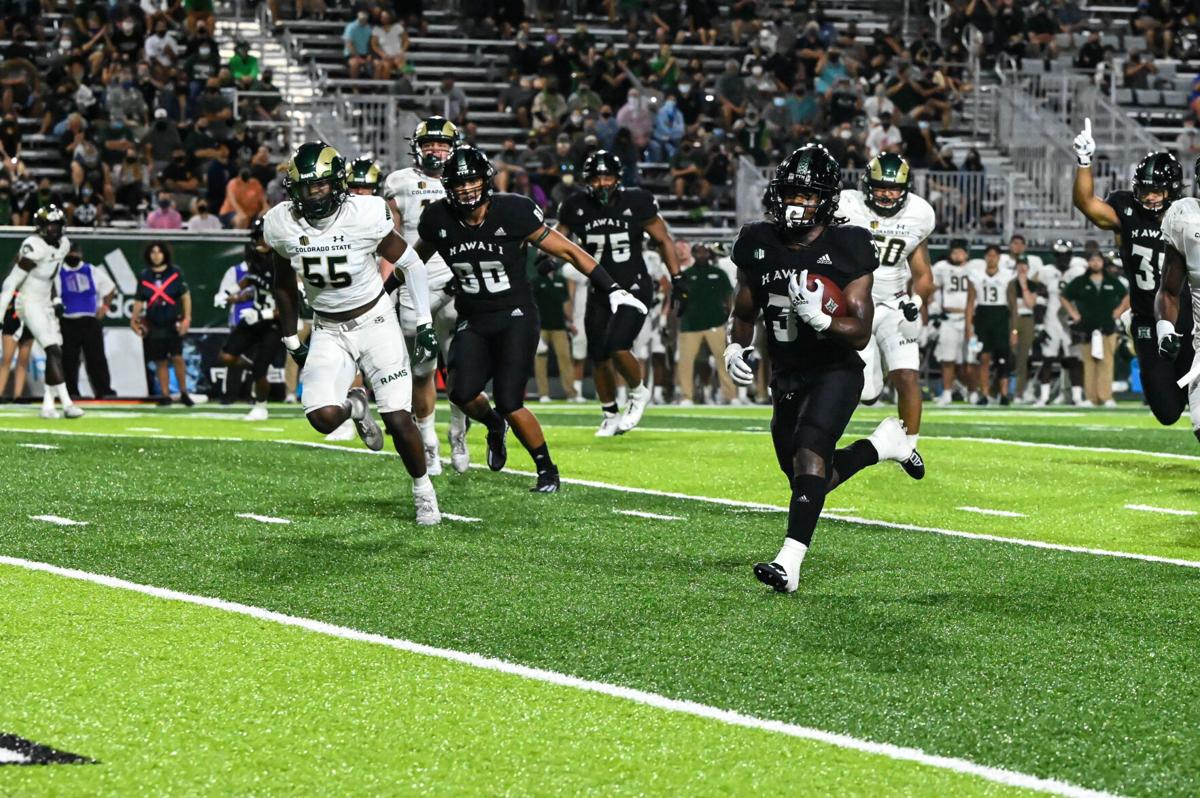 Dedrick Parson, #31, runs the ball in for a touchdown during the Rainbow Warriors' 50-45 win over Colorado State, Saturday November 20 at Clarence T.C. Ching Athletic Complex. 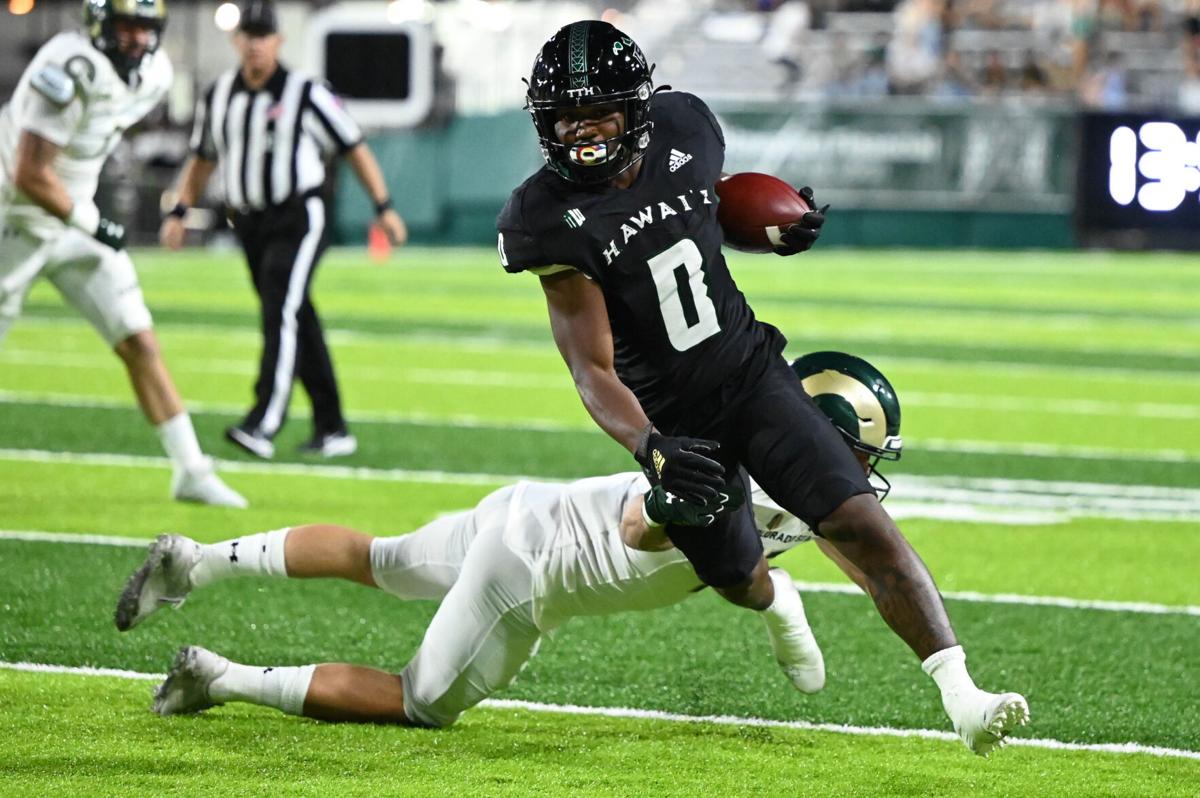 Cortez Davis, #18, tips a pass from Colorado State that Khoury Bethley, #5, intercepted for a Rainbow Warriors turnover during the Bows' 50-45 win over Colorado State on Saturday, November 20 at the Clarence T.C. Ching Athletic Complex.

Dedrick Parson, #31, runs the ball in for a touchdown during the Rainbow Warriors' 50-45 win over Colorado State, Saturday November 20 at Clarence T.C. Ching Athletic Complex.

After a slow start, the ‘Bows football team exploded for a 50-45 win over the Colorado State Rams on senior night, snapping a three-game losing streak.

“Great effort by our guys, it was a hard-fought deal,” Hawaiʻi coach Todd Graham said. “Bottom line we got it done, we won. What a great group of kids, love celebrating these guys.”

The high-scoring affair was a fitting tribute to the class of 16 seniors honored in a post game ceremony. This year’s senior class was headlined by names such as Calvin Turner Jr., Cortez Davis and Gene Pryor, fixtures of this Hawaiʻi team.

In the second home game without capacity restrictions, the attendance of the Hawaiʻi faithful improved slightly with 5,315 showing up in Mānoa. This number beat the previous numbers of 5,119 in their game against San Diego State and 1,000 at the New Mexico State game.

“It felt great, it felt right to get a win for the seniors after the season we had,” Hawaiʻi quarterback Chevan Cordeiro said. “The offense was rolling, the defense was doing good. For our last home game, it felt really good to win.”

Cordeiro came back from Las Vegas wheeling and dealing, throwing for 406 yards and 2 touchdowns and running for 34 yards and 1 touchdown. Hawaiʻi fans saw a return to form for the local kid who found Zion Bowens and Nick Mardner for touchdowns passes of 93 yards and 42 yards respectively.

Cordeiro also found a new favorite target in senior wide receiver Bowens, who had five receptions, 168 yards and a touchdown by the end of the first half. In the second half, he fell back to earth with a single reception for 4 yards.

“We thought he was really progressing in practice and getting better and we just thought he was a guy that could help us,” Graham said, “Really proud of Zion. I thought he had a big night.”

The Hawaiʻi offense stalled out three times in the first quarter, settling for field goals at each turn. In the second and third quarters, Cordeiro and company found their rhythm, finding the endzone five times. The 50 points were the most since they dropped 52 on the Army Black Knights on Nov. 30, 2019.

Both teams heavily relied on their respective passing attacks with neither team eclipsing 100 yards rushing until late into the fourth quarter. The ground game finally found some life in the fourth quarter with two Dedrick Parson touchdowns.

The offense's sudden burst of life after a three-game skid came in congruence with offensive coordinator Bo Graham calling plays from the coaches’ box rather than from the sideline.

“That's the way we want to do it,” Graham said of the coaching placement. “It's better, it's easier, calling plays from up there and just takes you out of the element and I thought they did a nice job tonight doing that.”

Hawaiʻi players continue to struggle with ball security with Cordeiro losing the ball twice; on a scramble and on a drop back early in the third quarter. These fumbles mark their 13th fumble lost on the season, ranking them at 130th in the country.

“We got fatigued, we played a lot of snaps defensively,” Graham said. “Guys fought and did what they had to do to win and I’m really proud of them.”

A trio of ‘Bow defenders saw their names called on a turnover. Defensive backs Khoury Bethley and Cameron Lockridge picked Centeio off and linebacker Darius Muasau forced fumbles on Centeio and running back David Bailey. Blessman Ta’ala recovered the Bailey fumble and Lockridge took his pick to the house for 6 points.

The Rams outpassed the ‘Bows with 527 yards, 119 more yards than their opposition, but mistakes highlighted their downfall. Seven penalties, three turnovers and four sacks allowed proved to be their undoing in trying to overcome the 26-point deficit.

After the win against Colorado State, the ‘Bows move to 5-7 on the season, elevating them to a .416 win percentage and snapping a three-game losing skid. They will now head to Laramie, Wyoming to take on the Wyoming Cowboys on Nov. 27 at 10 a.m. HST. The game will be available for purchase on Spectrum pay-per-view and also broadcast on the ESPN Honolulu radio station.

Like the radio voice of University of Hawai‘i volleyball Tiff Wells says, there is no better place to have a senior night than in Hawai‘i.

Wāhine basketball no match for Utah

It was an uphill battle from the get-go.