Skip to main content
You have permission to edit this article.
Edit
Home
CAMPUS
NON-CAMPUS
GOVERNMENT
SCIENCE & SUSTAINABILITY
1 of 3 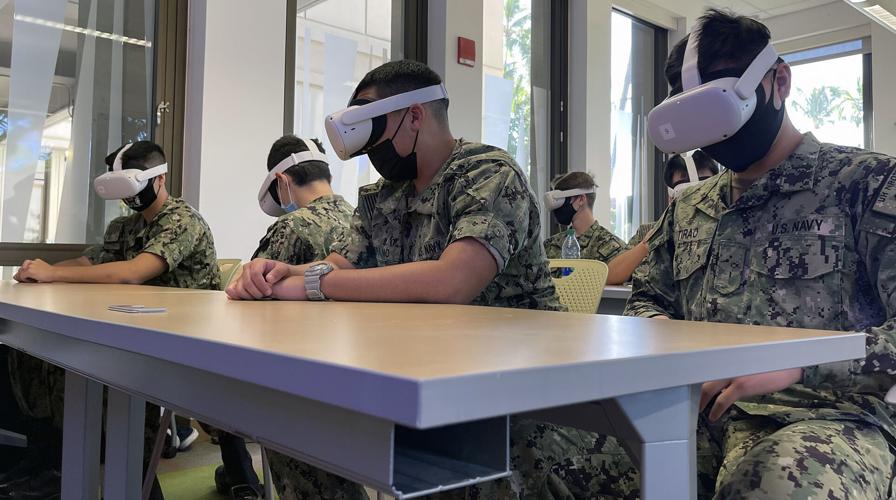 Naval ROTC midshipmen watch the air raids on Pearl Harbor in December 1941 first person from the deck of the USS Utah using virtual reality at the University of Hawai’i at Mānoa, Feb. 22, 2022. The VR headsets were provided by the Pacific History Parks. 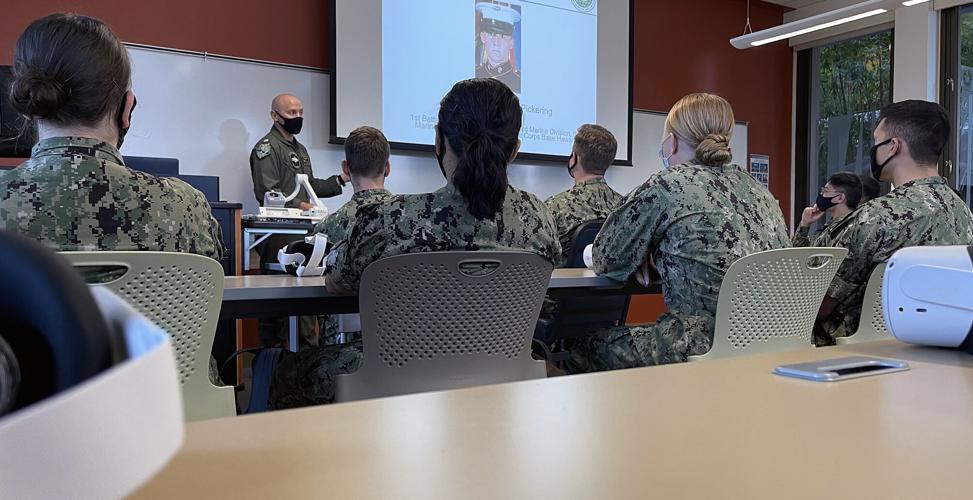 U.S. Navy Lt. Sawyer Smith, Department of Naval Science Naval ROTC aviation officer and instructor, teaches midshipmen about those killed in the attacks on Pearl Harbor and 9/11 in preparation for a virtual reality experience at the University of Hawai’i at Mānoa, Feb. 22, 2022. In total, there are 25 midshipmen who are part of the 1st-ever NROTC program in Hawai’i. 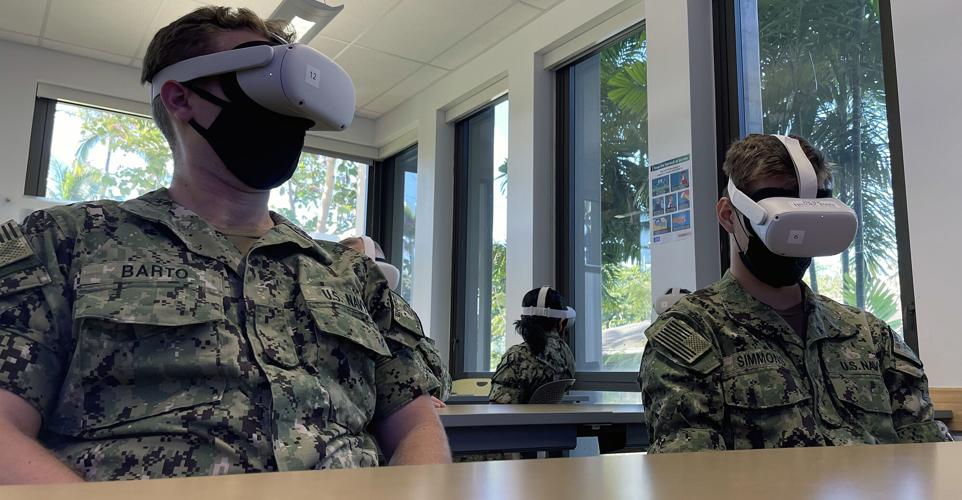 Naval ROTC midshipmen watch the air raids on Pearl Harbor in December 1941 first person from the deck of the USS Utah using virtual reality at the University of Hawai’i at Mānoa, Feb. 22, 2022. The VR headsets were provided by the Pacific History Parks.

Imagine standing on the deck of the USS Utah as Japanese aircraft fly above you, dropping bombs on the Navy ships around you. You can see the destruction and hear the cries of fellow Sailors. The date? Dec. 7, 1941.

This is exactly what 25 Naval ROTC midshipmen at the University of Hawai’i at Mānoa experienced Tuesday during their morning Naval Science 102 class.

The midshipmen watched the air raid on Pearl Harbor from the point-of-view of a battleship deck and sat in the cockpit of a Japanese fighter plane, from take-off to the attack, through the lens of virtual reality headsets courtesy of Pacific Historic Parks, a non-profit organization that does historic preservation of historical sites in the Pacific.

“I thought the VR headsets were a very new and different way of learning about the attacks of Pearl Harbor,” NROTC midshipman 4th Class Dylan Yamaguchi, a freshman kinesiology major, said. “Instead of imagining it in our heads, we’re actually able to see it firsthand and see all the little details that some history books don’t even point out.”

Unlike established ROTC programs that have upperclassmen to help mentor lower classmen, the current midshipmen are forging their own way ahead.

“They’re learning all of this firehose effect,” U.S. Navy Lt. Sawyer Smith, Department of Naval Science NROTC aviation officer and instructor, said. “They’re all doing an excellent job, and in my opinion, in the staff’s opinion, exceeding our expectations academically, physically, and really, in all aspects.”

The class marked many firsts. Not only was this the first time PHP provided the experience in a university classroom setting, but they also presented it to midshipmen in the first-ever NROTC program on Hawai’i.

“The Army and the Air Force have been here for quite some time, but this is the first year that the navy has been at the University of Hawai’i, in the state of Hawai’i, period,” Smith said.

The Navy ROTC program educates and trains midshipmen for service as commissioned officers in the U.S. Navy or U.S. Marine Corps. Upon graduation, they will commission into the Reserves or active duty and must complete a required minimum service requirement.

UH Mānoa NROTC requires the midshipmen to take Navy-centered classes that focus on navigation, leadership and more. The class Smith teaches was learning about the leadership styles during Pearl Harbor and provided a good opportunity to integrate VR.

“We discuss a lot of leadership roles and decisions that were made in history in the Navy and the Marine Corps,” Smith explained. “They can learn from that, and they can use that when they are leading their own Sailors and Marines to make the best decision they know how at the time and hopefully not repeat history in a negative way … use what they’ve learned to change the course of the future for the better.”

“I really enjoyed it because it was a more hands-on experience rather than just reading about it from a book,” said Spillman, a freshman who is double majoring in political science and Spanish. “We got to really dive into the full experience on how the Sailors felt that day.

“One takeaway was the different strategies and tactics that were used both from the Japanese and American perspective,” she continued. “It was really interesting to see as a future officer those different lessons and how we need to look at both perspectives when thinking about those type of situations.”

To learn more about the UH Mānoa NROTC program, visit their website by clicking the link.