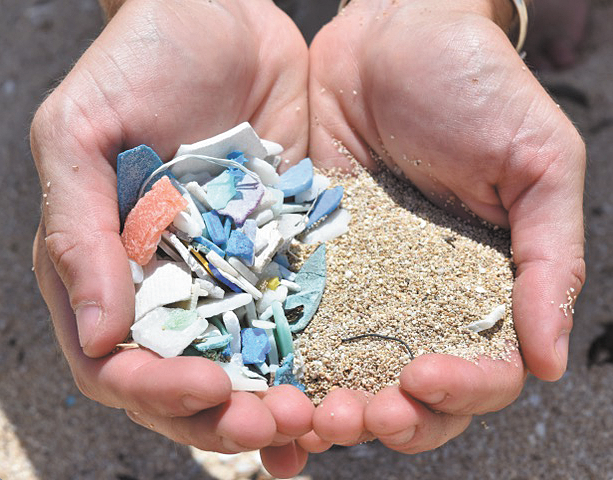 The problem of debris goes deeper than the oceans surface. 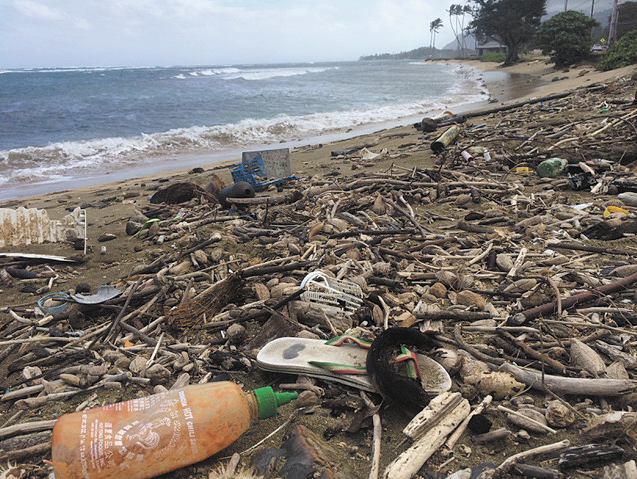 What is marine debris?

Marine debris includes any man-made materials arriving in the marine environment, primarily through littered garbage entering storm drains and streams. In a study on the effects of mechanical and chemical process on plastic debris, Cooper and Corcoran add that commercial and recreation vessels also directly contribute lost garbage and fishing equipment.

If you would like to contribute to Langston’s research on the role of human behavior in marine debris, you can participate in her survey at goo.gl/forms/KWa16QE6w6lBHz0l2.

Dolphins with soda rings around their mouths and seabird stomachs full of plastic might be what comes to mind when you think of marine debris. But the problem goes much deeper.

Marine plastics can also contain organic toxins hazardous to both humans and wildlife, causing decreased water quality and pollution from organic chemicals. These chemicals include PCB’s, phthalates and formaldehyde, which can cause cancer in humans, according to Bergmann and their fellow researchers. Another study by Leberton, Greer and Borrero adds that 6.4 million tons of trash are released into the ocean every year, most of which is plastic, and plastic production has increased 500 percent over the past 30 years.

The debris also has untold personal and socioeconomic impacts in Hawai‘i. It is hard for people to watch their home become a dumping ground, and tourism is greatly impacted as it depends heavily on world-renowned beaches. These places are being flooded with human-made debris, creating an eyesore and, potentially, serious health risks. One study claims that tourism in Hawai‘i provides over 200,000 jobs to residents and produces over $12 billion in annual domestic product [4]. Pollution like marine debris has an effect on the perceived value of nature, as well as the ability to connect people with the natural world.

“Marine debris is a global issue negatively impacting Hawai‘i,” Blaire Langston, avid surfer and graduate student in the Department of Natural Resources and Environmental Management at UHM, said. “I want to be a part of the process helping to protect the ocean and its beaches for use by both humans and native species.”

Langston’s research targets people through education and awareness to reduce their contributions to plastic pollution, rather than removing plastics from the ocean. She is currently conducting surveys to understand how people see marine debris and communicate the ways people are impacting the marine environment. The goal is to curtail the flow of plastics into the ocean.

Little is known about the psychosocial perspectives of people contributing to the marine debris problem. Langston utilizes a human-centric approach; she focuses on the effects that environmental degredation will have on people. Langston hopes to address the lack of connection between people and place that has allowed the marine debris problem to grow so broad here in Hawai‘i and across the globe.

“A great way to improve one’s personal connection to the place and the issues is to personally get involved,” Langston said.

As a member of the Surfrider Foundation on O‘ahu, she encourages people to participate in beach clean-up events held by Surfrider, the Hawai‘i Chapter of the Society for Conservation Biology and other groups across the island.

“Participating in a beach clean-up can really open your eyes to the problems we are facing with human contributions to marine debris,” Langston said.

With looming environmental issues like climate change and the depletion of natural resources, the simplest way for people to help improve the state of our beaches and oceans is to make personal changes. Avoiding single-use plastics like straws and take-out containers, Langston said, is an easy way to reduce personal inputs to marine debris. Helping to spread awareness about marine debris issues and voting for legislation like the Honolulu County Styrofoam ban, that limits our overall use of these goods, are other ways to help.

3.Cooper, DA, PL Corrcoran. 2010. Effects of mechanical and chemical processes on the degradation of plastic beach debris on the island of Kauai, Hawaii. Marine Pollution Bulletin 60:650-654.

Nathaniel Wehr is a graduate student in the Department of Natural Resources and Environmental Management (NREM) at the University of Hawai‘i at Mānoa. Nathaniel’s personal research focuses on the ecology and management of feral pigs on the Hawaiian Islands. However, he has a vested interest in both conservation and education broadly. Currently, Nathaniel is serving as vice president for the Hawai‘i Chapter of the Society for Conservation Biology, the Graduate Student Organization’s grant representative for NREM and as a teaching assistant for the Department of Zoology, teaching ethology and vertebrate zoology.