You have permission to edit this article.
Edit
Home
CAMPUS
NON-CAMPUS
GOVERNMENT
SCIENCE & SUSTAINABILITY
1 of 4 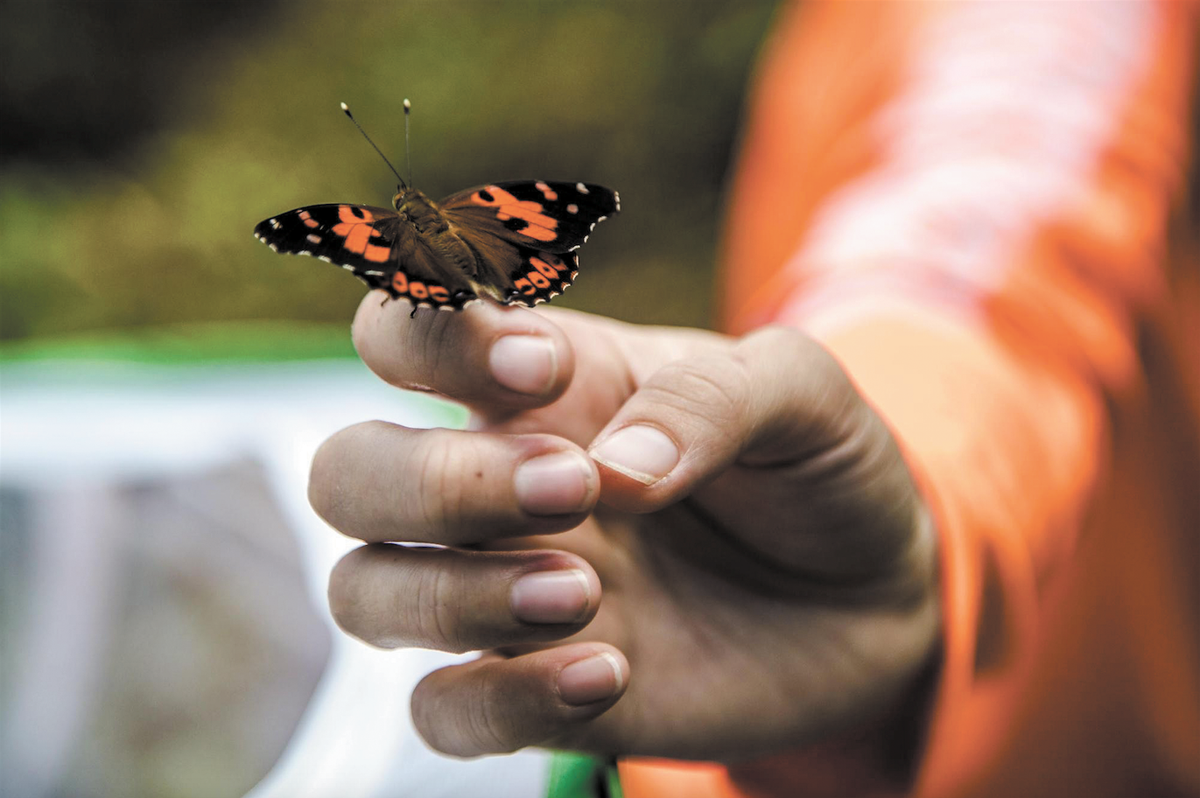 A male Kamehameha butterfly warming up before flying off. Butterflies of the species have spots at the tips of their wings. In males, some or all of these spots are light orange, while females have white spots. 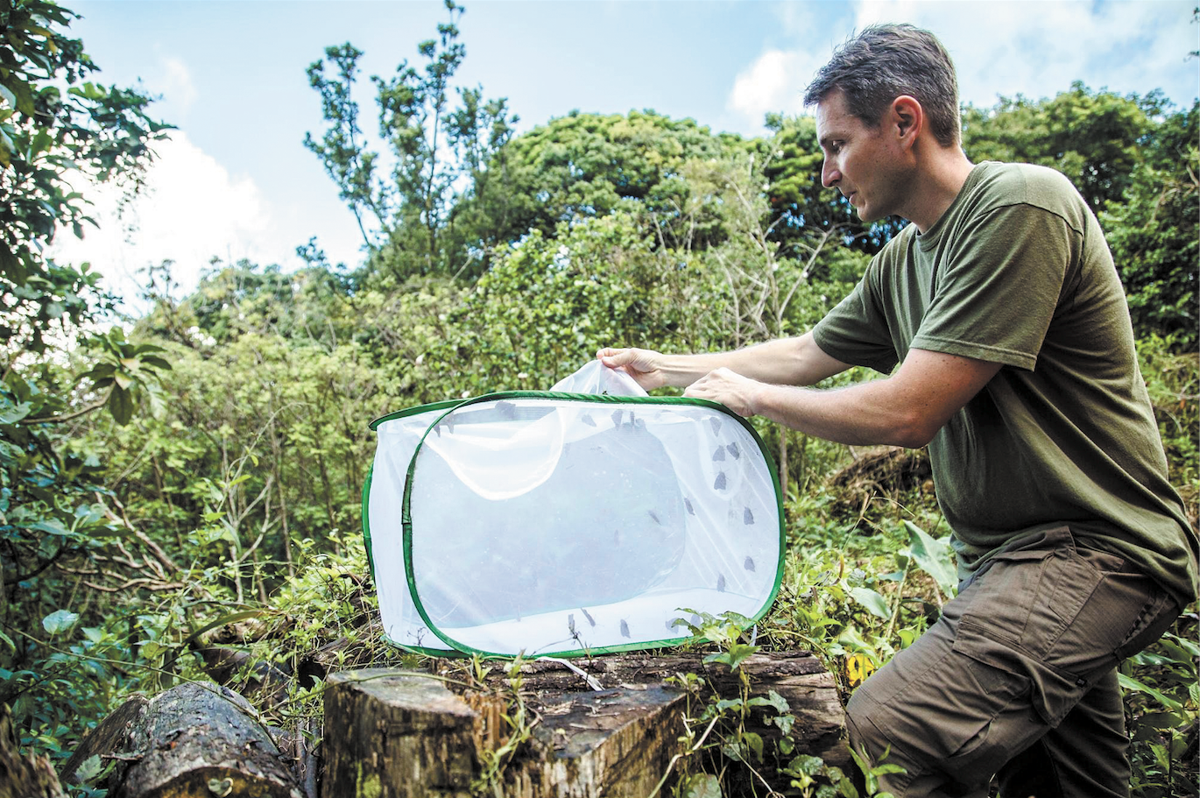 Will Haines, an entomologist for the Department of Land and Natural Resources, releasing Kamehameha butterflies at the 6-acre plot in Tantalus maintained by the Mānoa Cliffs Forest Restoration Project. 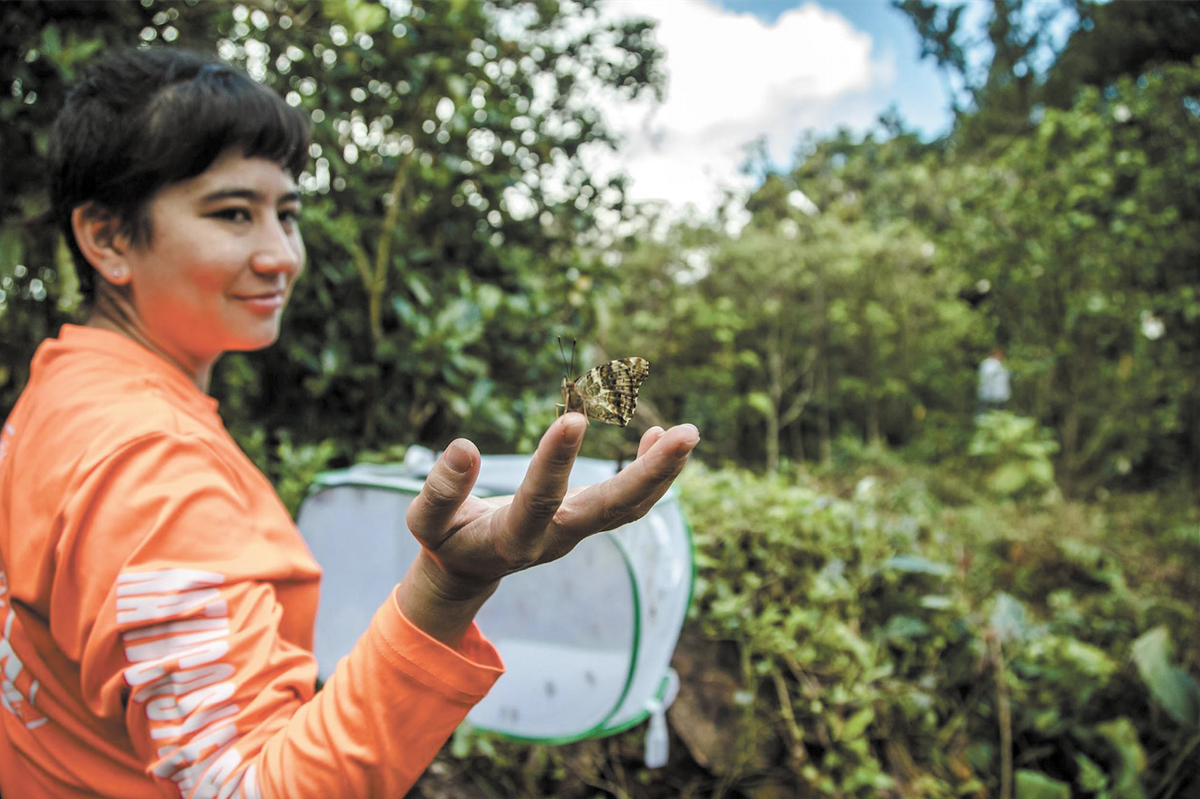 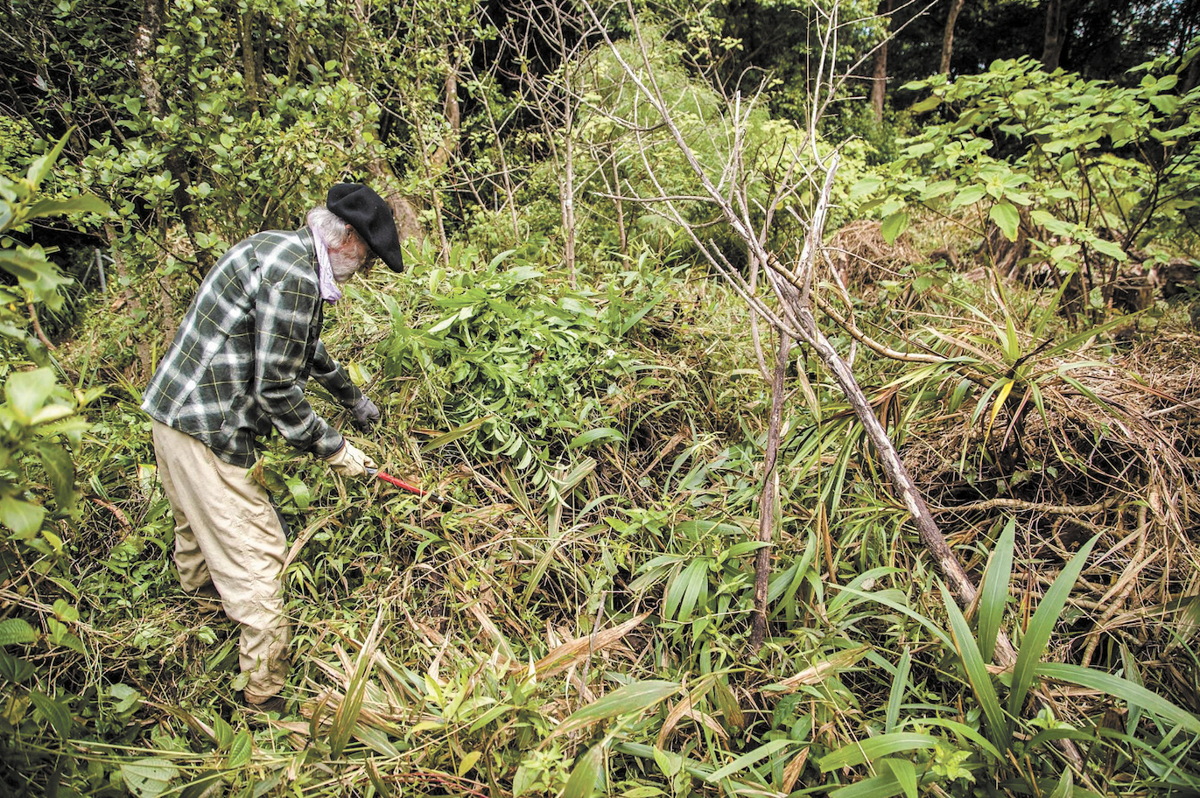 Brandon Stone, one of the founders of the MCFRP, cuts away invasive plants. The volunteer group has been clearing and maintaining the area since June of 2005.

A Department of Land and Natural Resources (DLNR) researcher and a volunteer restoration group are giving the Kamehameha butterfly (Vanessa tameamea) a shot at repopulation in the Tantalus area.

The Mānoa Cliff Forest Restoration Project (MCFRP) volunteer group and Will Haines, an entomologist for the DLNR, are doing what they can to bring the butterflies back to the area, where they have not been seen for nearly 40 years.

“We don’t know why the butterflies disappeared from Tantalus,” Haines said. “My former grad student … inferred that birds were having a pretty big impact.”

The MCFRP has cleared a six-acre plot of invasive plant species, including cinnamon trees (Cinnamomum zeylancium) that block sunlight from reaching the forest understory, not far from the Mānoa Cliff Trail.

The group’s volunteers have been maintaining the plot since 2005, and now that it has an open canopy that better supports native flora, It could be a suitable place to revive the local Kamehameha butterfly population.

The endangered Kamehameha butterfly (“Pulelehua” in Hawaiian) became the state’s insect in 2009. It is one of two butterfly species that are endemic to Hawai‘i and used to be common in the Tantalus area in the 1980s, but is no longer found there naturally.

Haines has started releasing butterflies and caterpillars there in pulses, the first in March of 2017 and the second in December. He released about 200 individuals each time. He said they have appeared to survive well enough in the plot, but never found evidence of a second generation either time.

Haines realized that releasing the butterflies in March correlated with the breeding period of some possible predatory birds, which may have spelled doom for those individuals.

He suspects birds also played a role in the poor results of the December release.

“That was kind of surprising, and we’re not exactly sure what ate them,” Haines said. “We plan to do the same thing again, but monitor bird predation more directly, either using cameras or by sitting and watching what happens.”

The butterfly likely has more than just birds to deal with in the area.

“There aren’t any really bad invasive ants at Tantalus, but there are a lot of [non-native] birds, as well as spiders and other invertebrate predators,” Haines said.

In conjunction with the Honolulu Zoo, Haines and Layla Rohde, who has been assisting in the project, decided to release caterpillars on māmaki plants along with adults in the December pulse.

Māmaki (Pipturus albidus), a Hawaiian nettle, is one of the most preferred food sources for the Kamehameha butterfly.

“Some [host plants] work better than others,” Haines said. “Māmaki is one of the best.”

Kamehameha butterflies are well-adapted to māmaki. As caterpillars, they are bright green like mamaki leaves. Rohde suggested the caterpillars even look like the silhouettes created by overlapping māmaki leaves.

“They make a little tent for themselves,” Rohde said of the caterpillars, which carve out the mamaki leaves and fold them over so they can safely hide and eat. “It’s nice for us because we can look up into the māmaki and be able to tell by the shelters … whether they were there.”

As chrysalises, they look like dried up māmaki leaves, as do the undersides of their wings as adults.

They hoped that releasing both adults and caterpillars would increase their chances of establishing a population in the plot.

The plot maintained by the MCFRP was initially chosen in 2005 by Mashuri White and Brandon Stone, the founders of the project, who saw the diversity of native flora hidden underneath the overgrowth of invasive species. They obtained a permit to maintain the plot and have been caring for it ever since.

“These trees love it. You give them open space, they go wild,” Stone said. “So you have to go in there [and] plant native stuff.”

The Honolulu Zoo has been working with the DLNR’s Hawaii Invertebrate Program to breed Kamehameha butterflies, both for the zoo’s exhibit and to restore local populations like the one on Tantalus. Laura Debnar, a curator for reptiles and amphibians at the zoo, oversees the newly-built Ectotherm Complex, where the Kamehameha butterfly exhibit is located.

Debnar was unsure how well the butterflies would breed in captivity, but the zoo produced hundreds of caterpillars in its first attempt.

Beyond Haines’ efforts and smaller projects, such as the one at the zoo or UH Mānoa’s Pulelehua Project, there does not appear to be much public interest in conserving the species. One contributing factor might be because it is easy to confuse it with the monarch butterfly (Danaus plexippus), both of which have orange-red and black wings.

Haines plans to do another release sometime in April. Bird netting, camera monitoring and sticky barriers are among the techniques he is considering to identify the problem in the Tantalus area and tip the scales in favor of the butterfly.