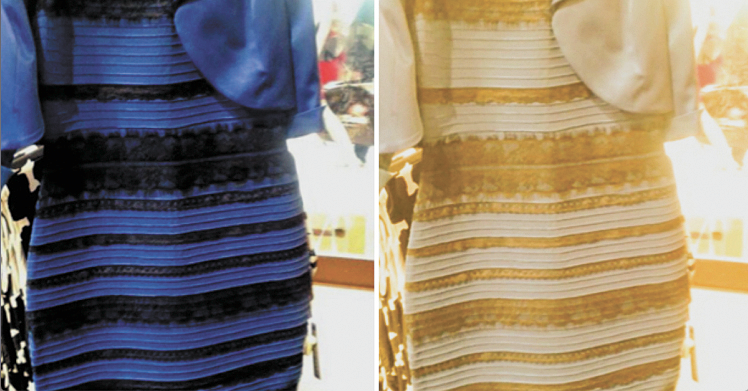 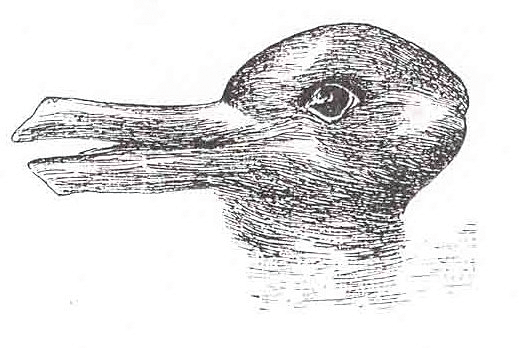 The rabbit-duck illusion dates back to a 1892 from a German humor magazine, Fliegende Blätter, according to an article by University College London

The concern of the internet this past week was whether a computer said Yanny or Laurel. As it goes with popular things on the internet, we will forget Yanny vs. Laurel qualms in another week. (Remember the black and blue vs. white and gold dress everyone cared about and then didn’t?) Before that happens, take a second to appreciate other perceptual illusions that highlight just how unreliable the human brain can be, and how the key to going viral lies in that unreliability.

(For the record: It was Laurel, probably. And the dress was blue and black, absolutely.)

My high school math teacher dropped her day’s lesson plan in 2015, to discuss the true color of a dress. “The Dress” was a big deal.

Cecilia Bleasdale took a photo of a dress she was planning to wear to a wedding in February 2015. As friends and family disagreed on the color, the photo went up on Facebook and Tumblr. Soon, it launched into viral disagreement history. Some people saw it as white and gold. Others saw it as blue and black.

The story echoed not only in the hallways of my high school, but on countless media platforms. In Buzzfeed’s “2/26: How Two Llamas and A Dress Gave Us The Internets: The Oral History,” news reporter Charlie Warzel wrote, “[b]y 9:02 p.m., The Dress breaks BuzzFeed’s traffic record (431,000 concurrent visitors). The post tops out at 673,000 concurrent visitors.”

The viral success of “The Dress” is something that has been discussed (and unsuccessfully replicated) over the past three years. Until, perhaps, Yanny vs. Laurel.

According to Robbins, “... [I]t has more to do with cat videos than science. To put it simply, we’d rather debate something positive, like the dress, than ISIS and Department of Homeland Security funding.”

While Robbins cited research that analyzed the emotional content of what is most shared on the internet, she is missing a point.

We may share positive news more, but it is the human brain that leaves us universally amazed. That is science. The science fuels the viral.

Perceptual illusions have been drawing crowds since before the internet. Just ask Harry Houdini. Well, you can’t ask him. But, you can ask David Blaine, Penn & Teller, Kyle Eschen or any other illusionist. These men’s occupations are built on the shortcomings of human perception.

Human perception is flawed. We fall victim to optical and auditory illusions all the time, without even knowing we have been tricked. So, what is perception? If you have not taken Psychology 100 yet, here is a crash course.

There is the outside world (sensation) and there is what is in our heads (perception). Cover one eye and hold out your palm a few inches from your face. What is closer, your hand or the newspaper or computer you are reading this article on? In all likelihood, your hand is closer. How do you know that? Because your hand is blocking what is behind it. This is the monocular cue and principle of interposition: Things closer to us often block what is behind or further away.

Our understanding of the world is established in our perception. However, we too often fall victim to the exploitation of perceptual principles. Thus, our perception is not always accurate.

Take the classic rabbit-duck illustration or the impossible trident, for example. Each of these images manipulate our perception and understanding of what the actual image is. This was the case with “The Dress”. Our perception of the color was skewed due to chromatic factors, exposure and context.

Auditory perceptual illusions exist as well. Yanny or Laurel is one of them. Just as with the dress, our perception of whether the voice is saying Yanny or Laurel is contextual. What makes this illusion particularly tricky is that it is a computer voice. It is likely what you perceive being said may be dependent upon how often you have heard computer voices in your life.

When listening to the recording, you cannot see someone’s mouth moving. Reading someone’s lips often helps us perceive words. In the McGurck Effect you may hear two different word sounds based solely on how someone mouths the word.

It is inevitable that Yanny vs. Laurel will fade into internet history like “The Dress”. The viral success of these memes have shown that humans dig illusions. More importantly, while we may not all understand it, we all dig science, at least to some degree – especially the science of our brains. From the great Houdini to memes of the 21st century, illusions involving human perception are one of the quickest ways to unite massive groups of people in awe.