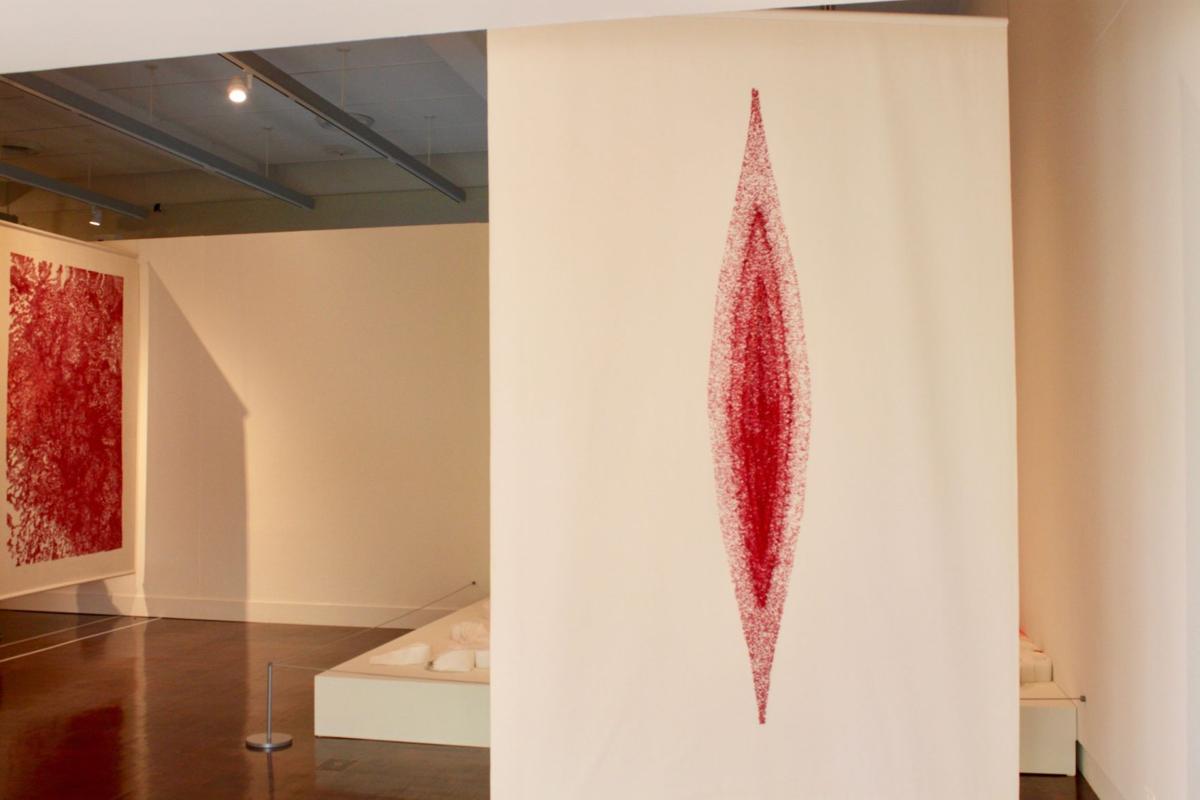 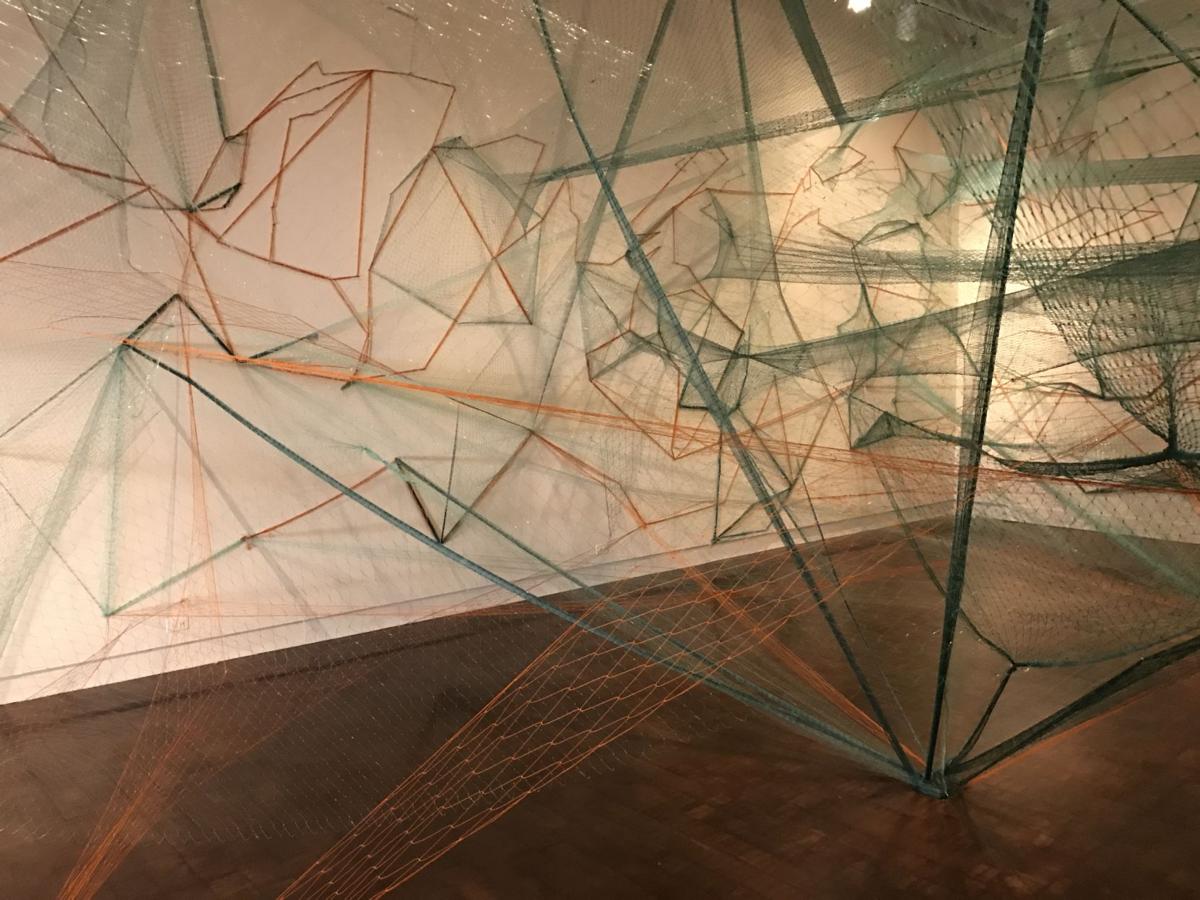 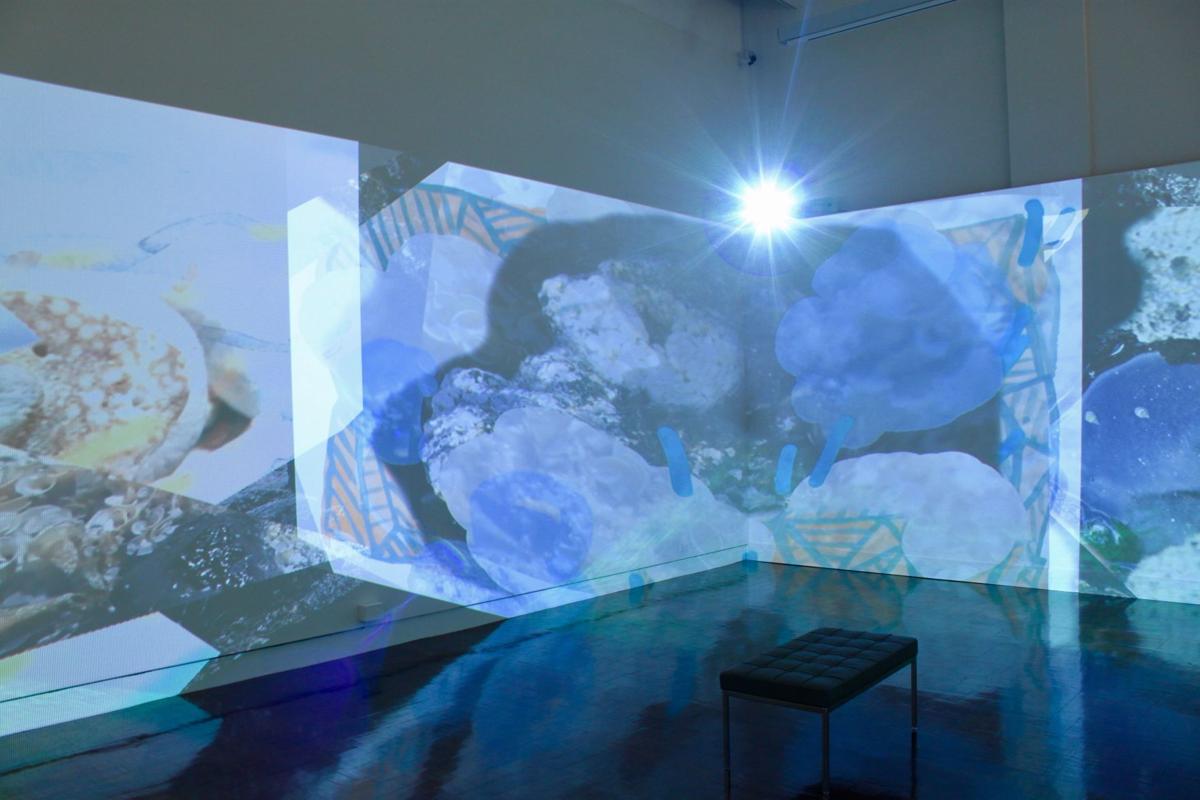 Dyed pieces of human skin, immersive multi-media projections and an entangled mass of fishing nets all greet visitors in the “Artists of Hawai‘i 2017” show at the Honolulu Museum of Art.

This year’s exhibition is the first curated by the museum’s recently-added arts of Hawai‘i collection curator, a position held by University of Hawai‘i at Mānoa MA graduate Healoha Johnston. The show offers a departure from previous years, focusing on room-sized installations that encourage rethinking how one experiences and interacts with art. Johnston played a critical role in communicating with the artists throughout the production of their work – evident in the show’s cohesiveness despite the extent of media used.

Entering the gallery space, visitors are first confronted by a hanging canvas featuring an elliptical form intricately created from the repeated looping of red yarn. This is the work of Kaori Ukaji, a lecturer at Hawai‘i Community College. Her installation, “Serenely Proliferating” (2017), focuses on the idea of repetitive mark making and is concerned with ideas about the physical body and its ability, or lack thereof, to regenerate and heal itself.

Along with the hanging canvases looped with yarn, “Serenely Proliferating” also includes two objects featuring the artist’s own pigment-dyed skin, a collection of stained rolls of tissue paper and a large sheet of paper upon which she repeatedly made marks. The sculptured collections of Ukaji’s skin draw the most attention and widest range of responses due to its delicate nature and unusual, and somewhat unsettling, medium. All of her works are connected by their use of red, a color associated with blood.

Johnston explained via email, “Ukaji’s recent reckoning with her health prompted ‘Serenely Proliferating’ as she grappled with the body’s ability to heal itself through cellular production and the natural course of degradation due to age or illness.”

Moving through the gallery, visitors encounter a collaborative effort between two artists: Kaili Chun, a lecturer at Kapi‘olani Community College and current PhD candidate in architecture at UH Mānoa, and Hongtao Zhou, an assistant professor of the School of Architecture at UH Mānoa. The duo created “Net_work” (2017) by stretching fishing nets around the gallery, physically sculpting the space based on the many ways Hawai‘i is connected to the rest of the world. The nets represent the role Hawai‘i plays in the worldwide fishing economy, while their path in the gallery suggests the shipping routes that are a necessary evil since Hawai‘i imports the majority of its goods.

“The installation plays with ideas of agency and autonomy in a global economy, and foregrounds notions of self-empowerment within predetermined systems. As visitors enter the system of nets, they will find their own direction on paths that lead through the installation,” Johnston said. "'Net_work' intends to prompt introspection on one’s ability to find self-awareness in existing paradigms, and draws attention to Hawai‘i’s multifaceted connections to the rest of world."

This continuing idea of interconnectivity permeates from each work in “Artists of Hawai‘i 2017,” on view at the Honolulu Museum of Art through May 28.

In the last room is Kasey Lindley’s video installation “Intertidal Grandeur” (2016). Incorporated in her piece, intertidal zones are the areas where the sea meets the ocean and organisms are either exposed or underwater. Lindley is the youngest participating artist in this year’s show, and her piece consists of four projectors, each playing a different looping video feed on the four walls of the gallery. The videos contain cropped and overlaid combinations of photos, videos and watercolors done by Lindley as she experienced intertidal zones around the island.

Accompanying the projections is an auditory component taken from an intertidal zone by Makapu‘u, which gives the piece a breathing sensation. By combining the mediums of photography, videography and watercolors, Lindley is critiquing the limits of traditional genres of landscape depiction, proving the difficulty of fully recreating the experience of being in nature itself. Instead, Lindley gives the viewer a chance to be present in her creation of intertidal zones, as visitors’ shadows fall onto the piece.