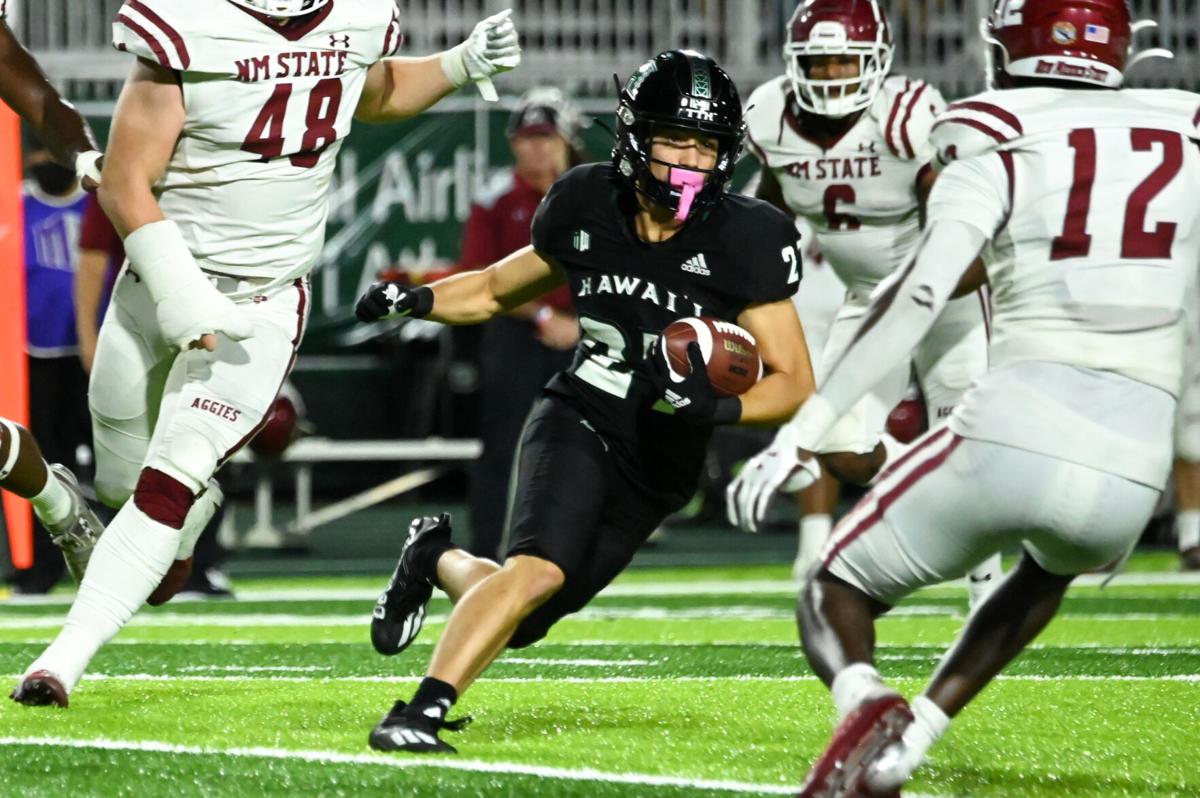 Koali Nishigaya after making a 13-yard catch in the Rainbow Warriors' 48-34 win over New Mexico State on October 23 at the Clarence T. C. Ching Athletics Complex. 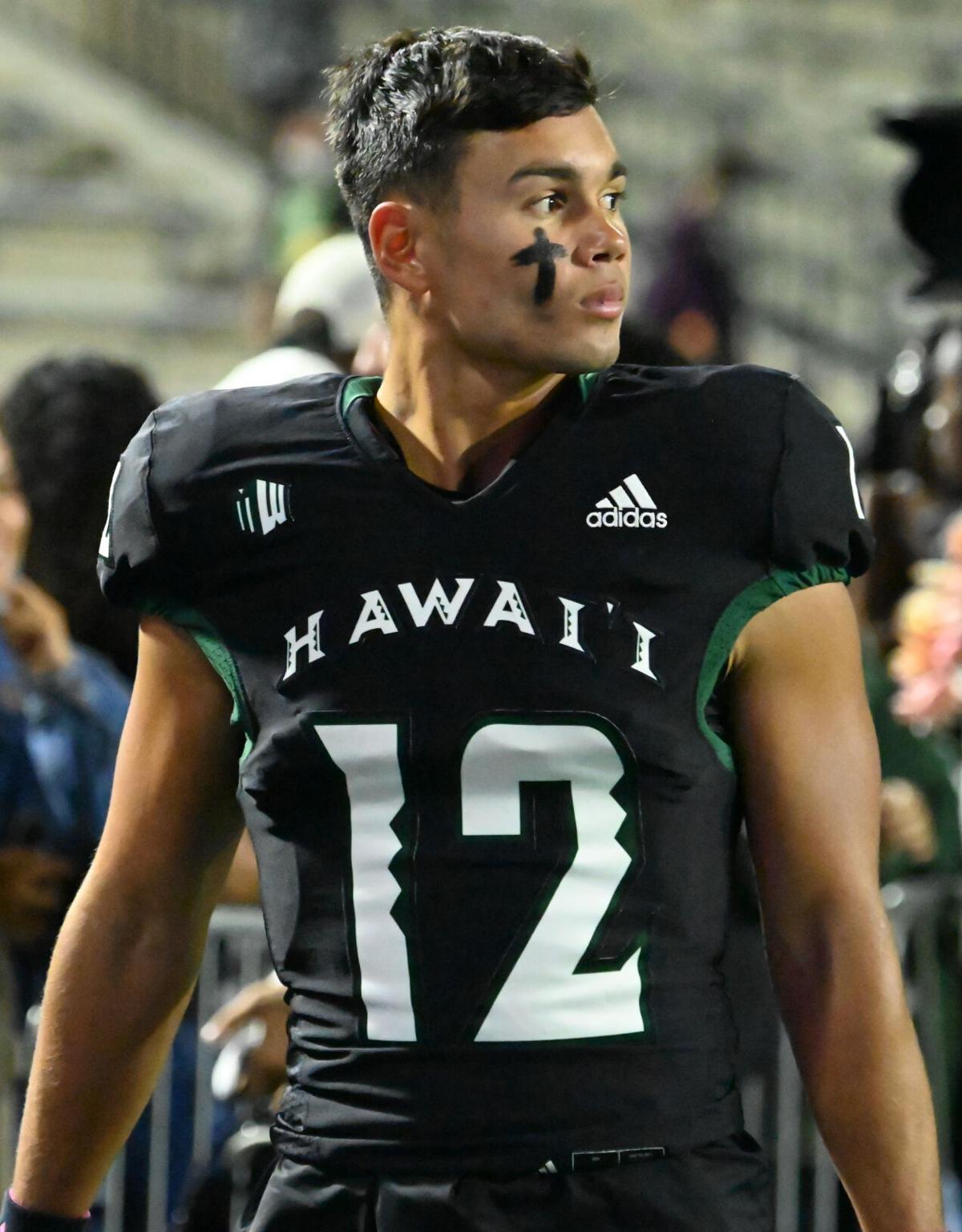 Rainbow Warriors quarterback Chevan Cordeiro walks the sideline during the 48-34 win over New Mexico State on October 23 at the Clarence T. C. Ching Athletics Complex. Cordeiro became the first University of Hawaii quarterback to pass for 6,000 yards and rush for 1,000 yards in a career against Wyoming on Nov. 30.

The Rainbow Warriors defeated the Wyoming Cowboys in Laramie, Wyoming 38-14 in the last game of the regular season on Saturday to reclaim the rivalry trophy, the Paniolo Trophy. The game was played at War Memorial Stadium, which boasts the highest elevation of any Division I football stadium at 7,220 feet above sea level. The elevation was not a problem for Hawaiʻi quarterback Chevan Cordeiro, who turned in one of his best performances of the season, and made one of the highlight plays of the year, a 50-yard Hail Mary touchdown pass just before halftime.

Cordeiro completed 19 of 31 passes for 323 yards, three touchdowns, and interception. He also had 86 yards and a touchdown on the ground in the final game of the season and is now the first player in Hawaiʻi history to have 6,000 passing yards and 1,000 rushing yards over a career.

Cordeiro drastically outplayed Wyoming quarterback Levi Williams, who struggled against the Hawaiʻi defense, completing 15 of 24 passes for 161-passing yards and a touchdown.

The ‘Bows were firing on all cylinders to start the game, driving down the field on their first possession with a mix of pass plays and run plays. They were able to score first after Cordeiro ran it in himself from 8-yards out.

The Cowboys were held scoreless on their first possession after a strong effort by the Warriors’ defensive unit brought up fourth down on the Hawaiʻi 36-yard line. Wyoming kicker John Hoyland missed a 53-yard field goal attempt and the turnover on downs provided the ‘Bows with excellent field position. The Warriors would capitalize on the Wyoming missed field goal by putting together another scoring drive.

Cordeiro was able to gain big chunks of yardage on the drive with a 20-yard rush and a 21-yard completion to Jonah Panoke. Later on the drive, a pass interference call in the endzone against the Cowboys gave the ‘Bows a fresh set of downs with the ball on the 2-yard line. That's when Calvin Turner Jr. lined up at tailback and punched it into the endzone to give Hawaiʻi an early 14-0 lead.

The start of the second quarter saw Hawaiʻi find the end zone yet again after Cordeiro connected with tight end Steven Fiso on a 19-yard touchdown pass. Three and outs from both teams then led to a punt by Matthew Shipley that pinned the Cowboys back on their own 8-yard line. With Wyoming deep in their own territory, stout defensive play by the Warriors almost resulted in a safety after a tackle by Eugene Ford on the 1-yard line, but Wyoming running back Titus Swen wisely stretched the ball over the plane as he went down, and the Cowboys were eventually forced to punt out of their own endzone.

The ‘Bows offense, which had been rolling, began to slow down on their next drive but they still came away with points after Shipley made a 25-yard field goal. With 5 minutes left in the half, Swen was able to cap off an 11 play, 75 yard drive for the Cowboys with a 4-yard rushing touchdown.

The 24-7 scoreline would not last long however, with the ‘Bows making a huge play before halftime. With the ball at the 50-yard line and four seconds left on the clock, Hawaiʻi had one last chance to score before the half. Cordeiro threw a Hail Mary pass towards the end zone that receiver Jared Smart was somehow able to catch while being surrounded by Cowboys defenders.

Midway through the quarter, Hawaiʻi was inside Wyoming’s 20-yard line when Cordeiro was hit as he released the ball, causing it to wobble awkwardly in the air. Wyoming defensive lineman Victor Jones picked off the pass which was the game's only turnover. The Cowboys made use of the extra possession and Williams completed a 30-yard touchdown pass to Isaiah Neyor.

With the score 31-14 in the fourth quarter, Cordeiro found Fiso for a 32-yard touchdown pass to seal the win and end the scoring in the game. The play was well designed as Fiso ran a shallow drag route across the field and caught the ball on the sideline without any Cowboy defenders near him to make a play. The 38-14 scoreline would hold until the final whistle and the ‘Bows reclaimed the Paniolo trophy.

With the win against Wyoming, the ‘Bows were able to snap a 6-game losing streak in Laramie’s War Memorial Stadium that dated back to 1991. Although the Rainbow Warriors ended the season with a win, their final 6-7 record does not meet the NCAA FBS criteria for bowl eligibility, which states that only teams with a .500 win percentage can participate. Unless Hawai’i is selected to participate in a bowl game as a substitute for another team, ‘Bows football will not be back until next season.