Skip to main content
You have permission to edit this article.
Edit
HOME
BASKETBALL
FOOTBALL
TENNIS
VOLLEYBALL
WATER POLO
OTHER SPORTS
1 of 7 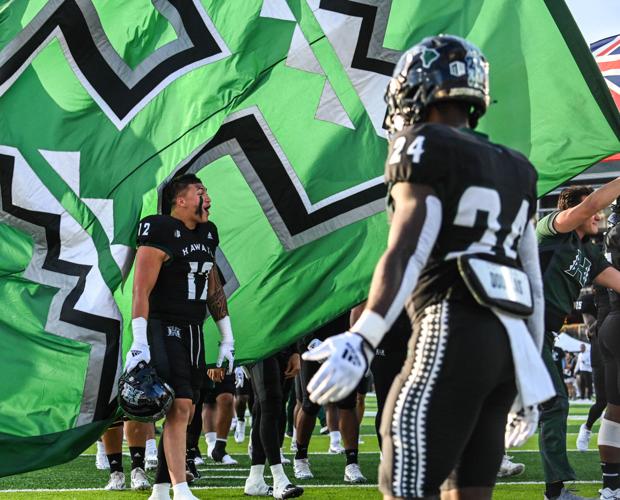 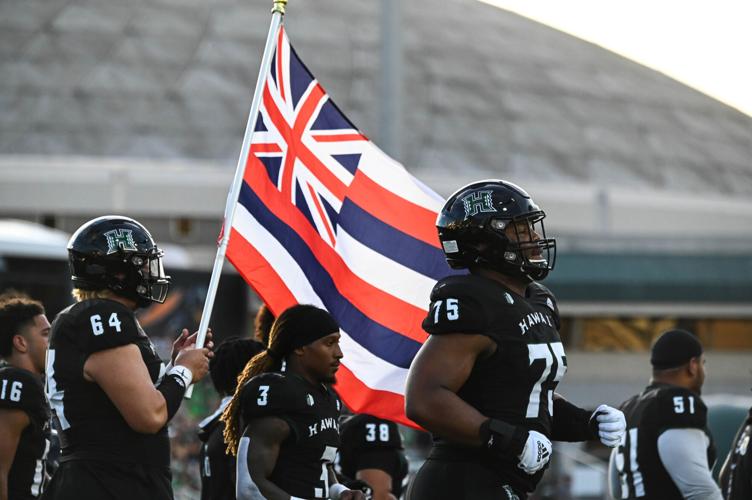 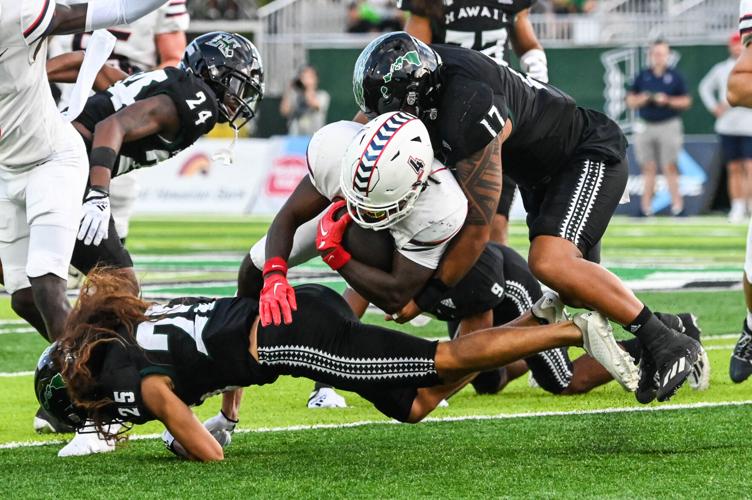 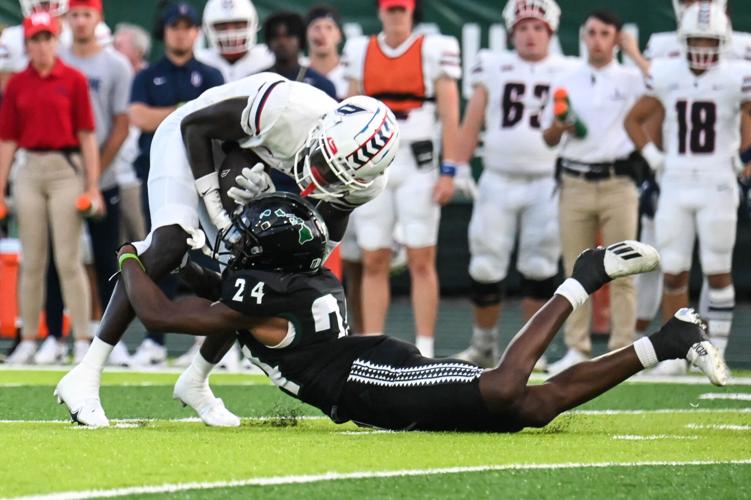 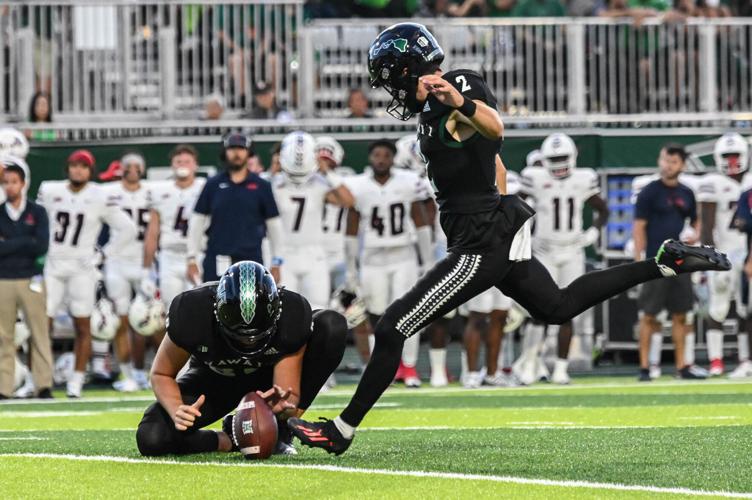 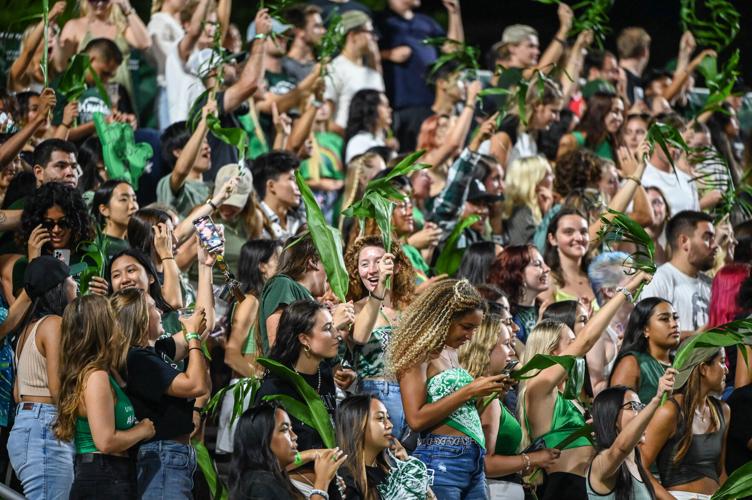 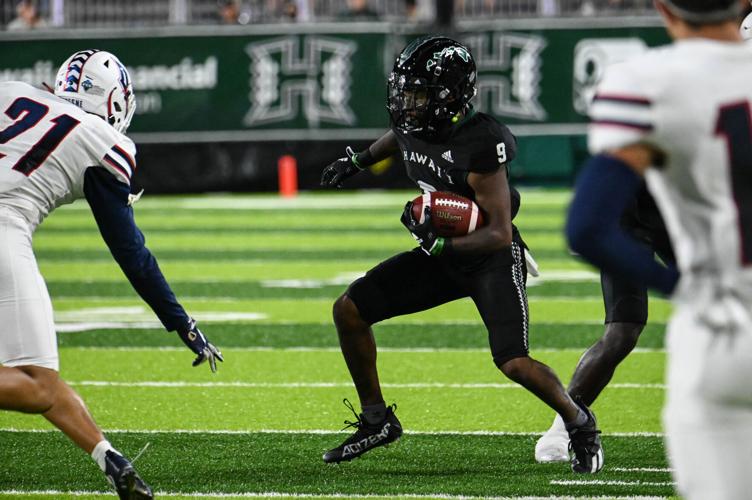 The offense had only a few breakout plays at the Clarence T. C. Ching Athletics Complex during Saturday night’s game against Duquesne, but the University of Hawai‘i at Mānoa football team made up for it with impact plays on defense and special teams to record its first win of 2022 with a 24-14 win over the Dukes.

“I was really impressed in the third quarter,” Hawai‘i coach Timmy Chang said about the Rainbow Warrior defense Saturday night. “The turnovers at the key times… I thought they played great team ball and tackled better.”

Penei Pavihi recorded the first defensive touchdown of the season for the Rainbow Warriors (1-3) in the fourth quarter on a 50-yard interception return off Duquesne quarterback Joe Mischler. The house call by the Hawai‘i linebacker put the Rainbow Warriors ahead 24-6 after a third quarter that saw the Dukes (1-3) dominate the time of possession, holding the ball for 12:11 of game time.

“That was big for me. It’s my second pick-six in my whole life, so it was a pretty huge moment for me,” Pavihi said. “Grateful for Isaiah Tufaga for getting pressure on the quarterback and everybody doing their job at the end. Good things happen when you do your job.”

Pavihi and Malik Hausman combined to intercept the Duquesne quarterback duo of Mischler and Darius Perrantes three times, with Hausman’s two interceptions both occurring in the end zone.

Dedrick Parson scored two touchdowns on the ground for the Rainbow Warriors in the first half, with both scoring drives set up with a short field by the Rainbow Warrior special teams unit — a 58-yard kick return by Jalen Perdue and a blocked punt inside Duquesne territory by Kaulana Makaula.

Apart from Parson’s touchdowns, the Hawai‘i offense was stagnant for much of the night, recording 184 yards of total offense, its lowest total since the 2015 season.

“We got to put everything together. All the stats and stuff, it matters, but at the end of the day, we got to win,” Parson said. “(Defense) played a great game today. We got to step it up more in the future.”

Joey Yellen started at quarterback for Hawai‘i, playing the first three quarters before throwing an interception late in the third quarter and being replaced by Brayden Schager in the fourth quarter.

Yellen finished 13-for-20 with 86 yards and the interception, and was also sacked twice. Schager’s two drives netted a field goal for the Rainbow Warriors, but much of the game plan was towards chewing the clock as he completed his only pass for seven yards.

On Duquesne’s side, Mischler went 16-of-30 for 133 yards and two interceptions, while Darius Perrantes went 6-of-13 for 97 yards and threw for Duquense’s only touchdown of the night, a 29-yard touchdown to Dwayne Menders Jr. in the late stages of the fourth quarter.

Hawai‘i plays New Mexico State in Las Cruces next Saturday at 2 p.m. HST. The game will be streamed on FloSports while ESPN Honolulu will have the radio broadcast.