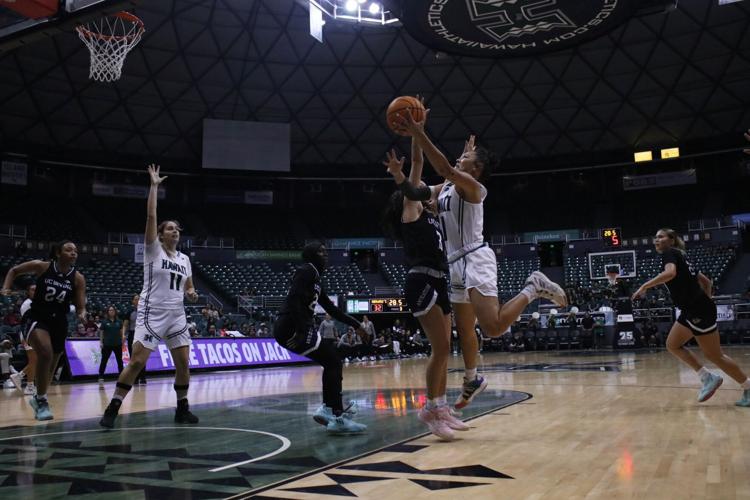 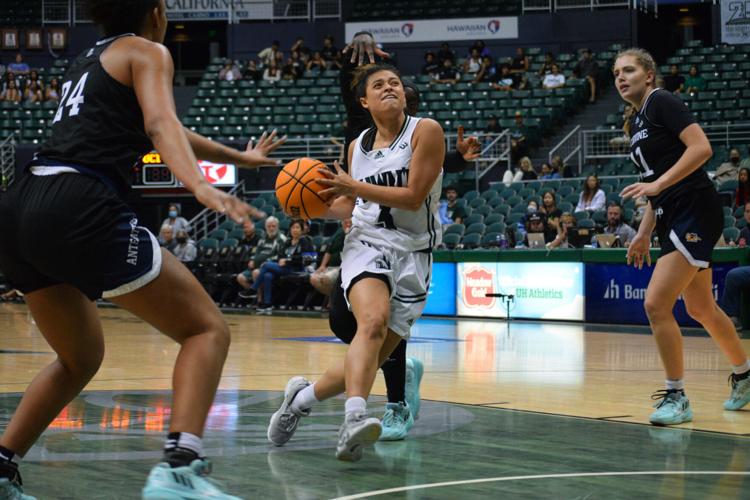 “Irvine is the team to beat, they’re the best team in the conference,” UH coach Laura Beeman said. “They’re playing like that.”

Daejah Phillips scored all of her team-high 13 points in either the fourth quarter or overtime period for UH, including a 3-point play in the beginning of the fourth that jump started the Wāhine rally.

“I went into big dog mode. I knew we needed to gain energy and get going,” Phillips said. “They didn’t know what to do with Lily and Jovi (Lefotu). Once they were able to stop Lily and Jovi, it was my turn to go and try and get buckets or find my open team(mates). They let me go down the lane pretty much as much as I wanted in the fourth.”

Wahinekapu added 12 points and grabbed a season-high eight rebounds, and Nnenna Orji scored 12 points off the bench for UH.

The game was stopped for 10 minutes in the first quarter after UC Irvine guard Olivia Williams suffered a gruesome knee injury inside the paint with 3:49 left in the period. Williams was attended to by both trainers and UH’s medical staff, and was helped off the court with her left leg being put in an aircast.

“You never want to see a young lady go down like she did,” Beeman said. “Prayers are definitely with her and her recovery… I give a lot of credit to Irvine for staying focused and being able to work through that. They’re on a mission and you can tell.”

While Irvine went up by six points early in overtime, UH trimmed its deficit to 62-60 with a minute to play. Amelia Scharpf hit a 3-pointer from the top of the key with 38 seconds left to give UC Irvine a 65-60 lead, and the Anteaters were able to make six of their eight free throws to close out the game.

“That’s what good teams do. You step up and hit the free throws you need to hit,” Beeman said. “We put (Irvine forward Nyagoa Gony) at the free throw line — (who) shoots probably one of the lowest percentages — and she drained them.”

Although UH tied the game with two clutch free throws, the Rainbow Wāhine shot 16-of-27 from the free throw line overall and also went 1-of-18 from 3-point range in the game.

“We normally shoot well from the free throw line. I was shocked by how badly we shot,” Beeman said. “3-point percentage was also pretty bad. We just need to keep working, but overall, incredibly proud of this group.”

Davies out for rest of season

It was announced that redshirt junior guard Olivia Davies would miss the rest of the season with what was reported by multiple media outlets as a lower body injury.

“For her health, this was the right decision,” Beeman said. “Where we go from here is going to completely depend on what Olivia wants to do and what her body allows her to do. Regardless, she will be part of our family as long as she wants to be a part of our family.”