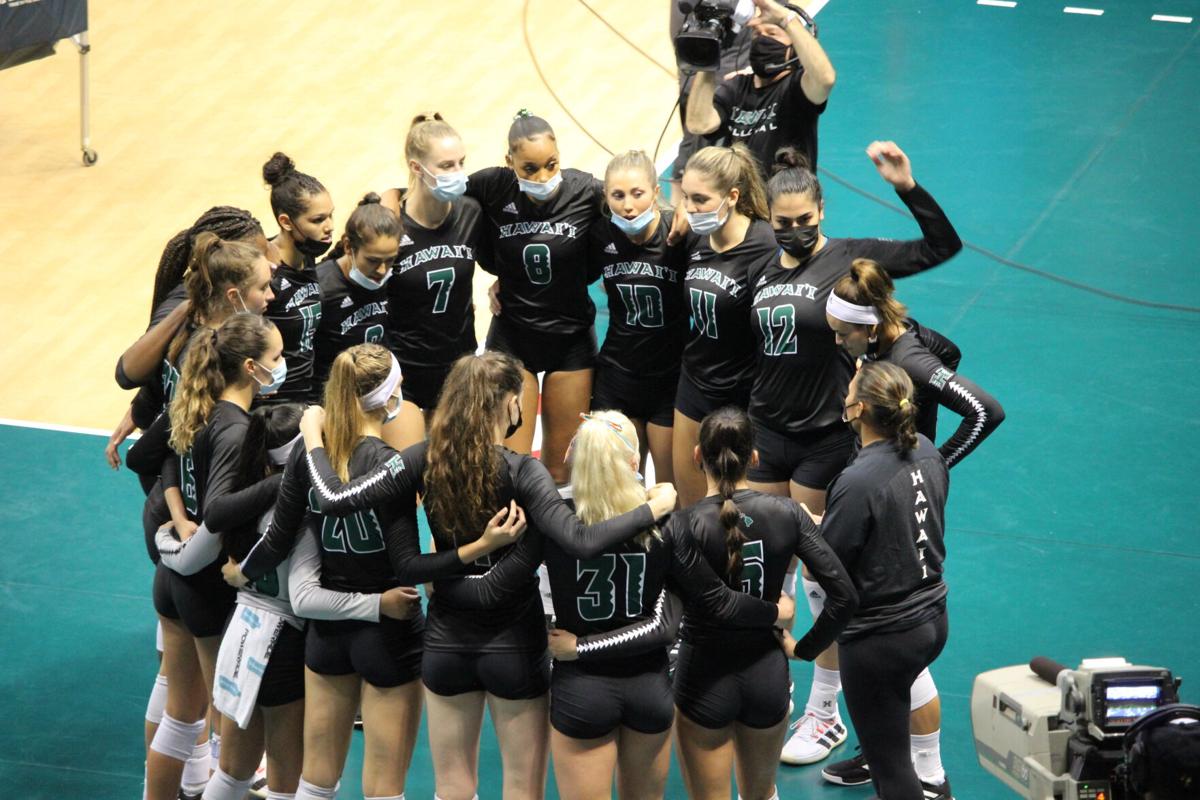 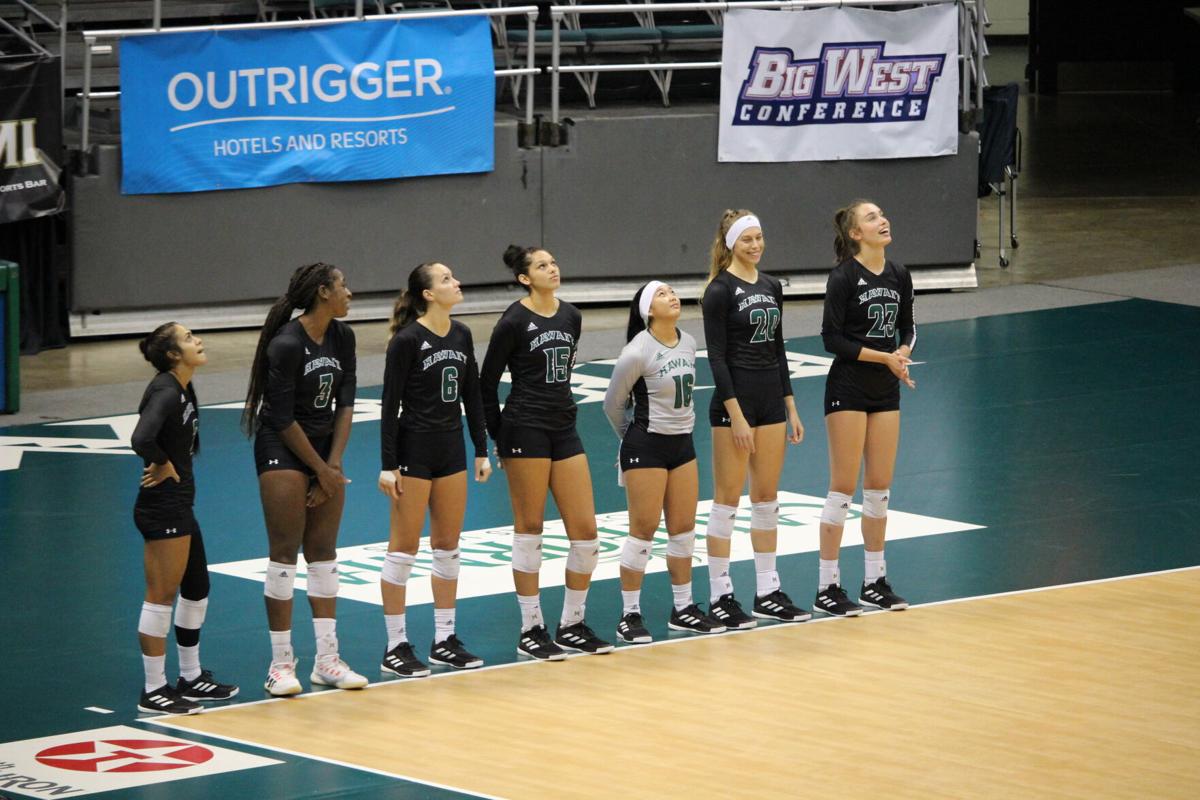 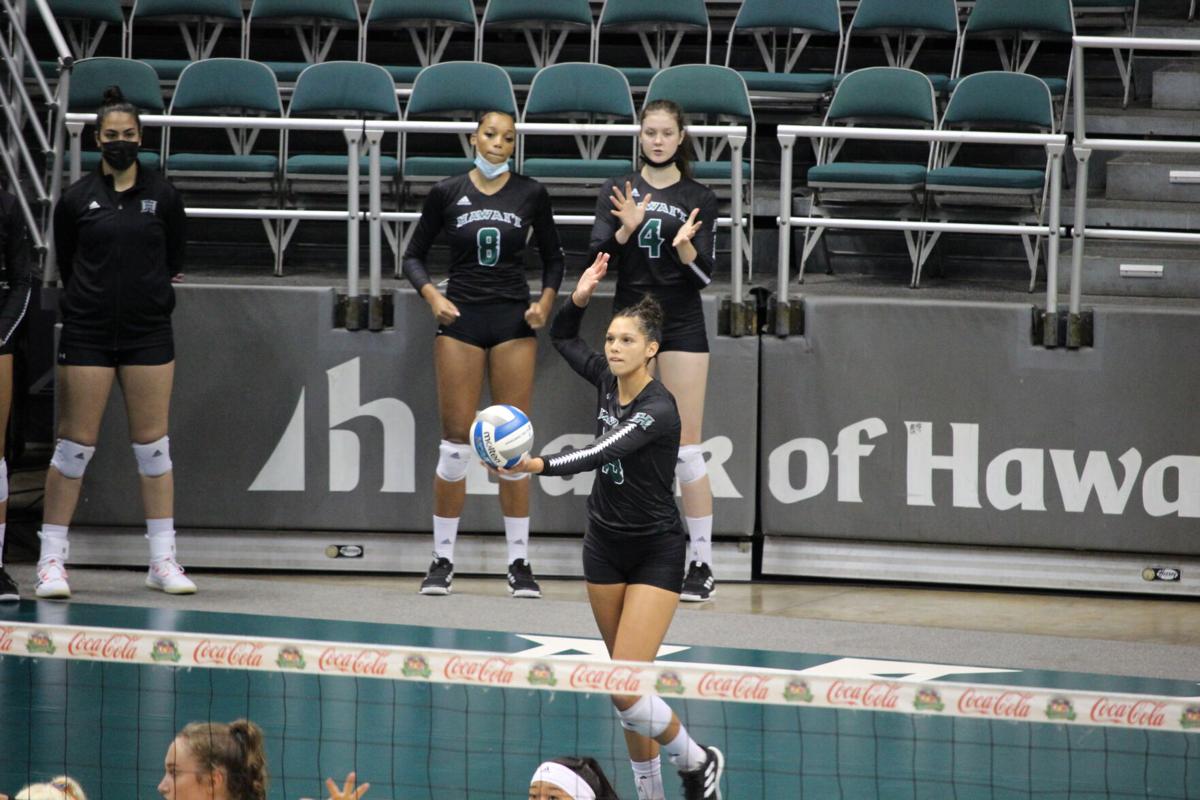 Night two of the Outrigger Volleyball Series went differently than night one for the Rainbow Wāhine volleyball team, as they lost to USC in four sets to split the weekend at SimpliFi Arena at Stan Sheriff Center. Scores for Saturday night’s match were 25–21, 16–25, 22–25, and 23–25 for Hawai‘i.

“We were right there with [USC],” Hawai‘i coach Robyn Ah Mow said. “It’s just unforced errors... we just got to go back and fix that. Every game is a learning experience for us.”

“We definitely know that in tough situations, we can take care of business,” Hawai‘i outside hitter Brooke Van Sickle added. “Tonight, we got complacent.”

Van Sickle had her third double-double of the season for Hawai‘i (12 kills, 11 digs), and also led the team with 57 swings on Saturday, the most by a Rainbow Wahine since Hanna Hellvig’s 62 against Cal State Fullerton in 2019.

Hawai‘i claimed set one despite USC having more kills in the set (12 to Hawai‘i’s 11), using USC’s 9 unforced errors and 3 Rainbow Wāhine service aces to win the opening set. The set concluded when USC’s Brooklyn Schirmer was blocked by Annika de Goede and Amber Igiede.

USC rebounded and took set two with a 4–0 to begin the set, and held the lead from there behind a strong .342 hitting percentage, while Hawai‘i struggled in the set and only recorded nine kills for a .079 hitting rate. The Rainbow Wāhine were able to delay set point briefly, before Candice Denny’s slide kill gave USC the set and tied the match at one apiece.

Set three was the big blow for the Rainbow Wāhine, who led by as many as nine points in the set but ended up losing it as USC closed out the third on a 14–2 run, during which three of the four Trojan blocks in the set took place. Sam Hastings’ second service ace of the match ended up being the 25th point for USC.

“We just didn’t adjust,” Ah Mow said. “We just took too long to adjust to the serve, and then in that [third] set, [USC] kept hitting to the high right side... before it was the high left.”

The fourth set was going Hawai‘i’s way early, as they built an early 3–0 lead before a net violation on Hawai‘i put USC in the scoring column. USC managed to tie the game and exchange sideouts, although Hawai‘i reached 15 points in set four first. After the media timeout, USC went on a 5–1 run and retook the lead, forcing a Hawai‘i timeout.

The momentum in the set seemed to shift back in favor of Hawai‘i when Skyler Williams recorded her only kill of the match. Martyna Leoniak followed up with a service ace to cut their deficit to two points, forcing a second USC timeout. The Trojans took care of business on the next play, as Denny and Emilia Weske blocked Van Sickle’s 57th swing of the night to take the third and final match.

USC had four of its players with double-digit kills, with outside hitter Brooke Botkin recording a team-high 16 kills to go with 15 digs. Trojans setter Raquel Lázaro also recorded her second double-double of the weekend with 43 assists and 13 digs.

Hawai‘i has a bye week, during which it will play its annual Alumnae game on Sept. 17 at 7 p.m. HST. After that, they begin Big West Conference play, starting with UC Riverside on Sept. 23 in Riverside. First serve is scheduled for 4 p.m. HST.