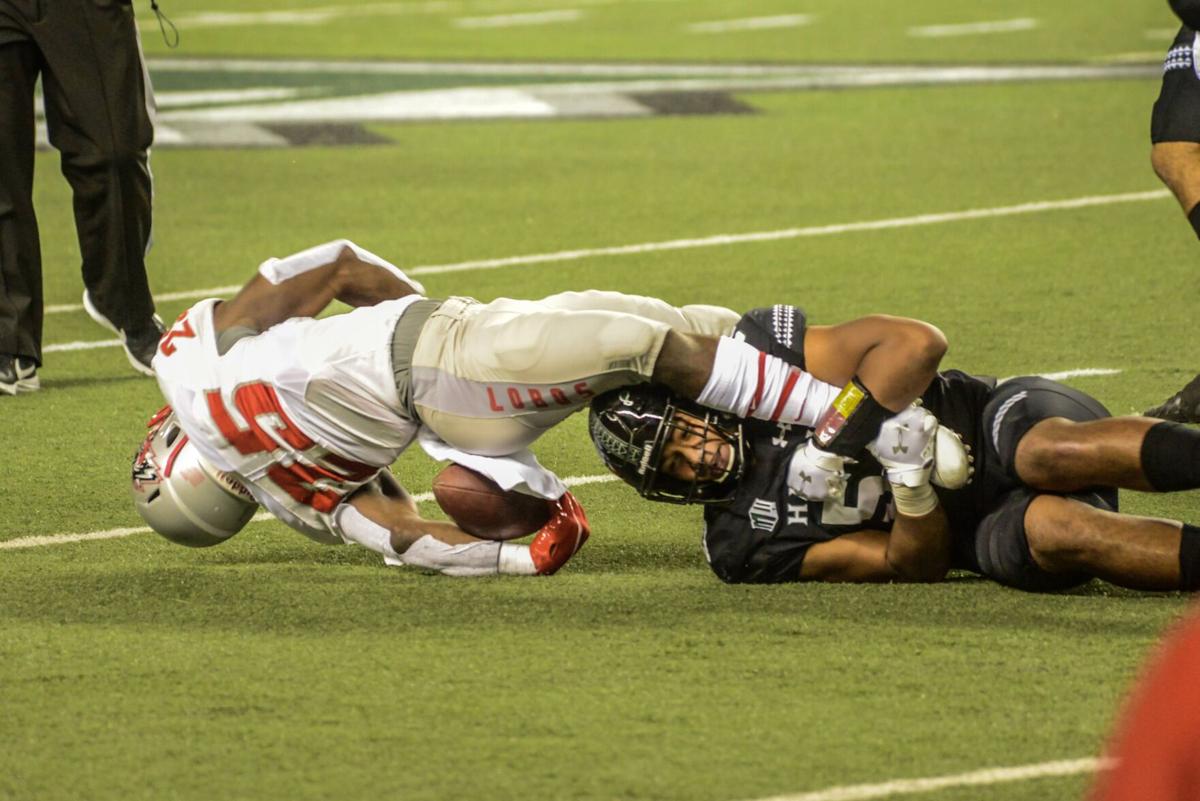 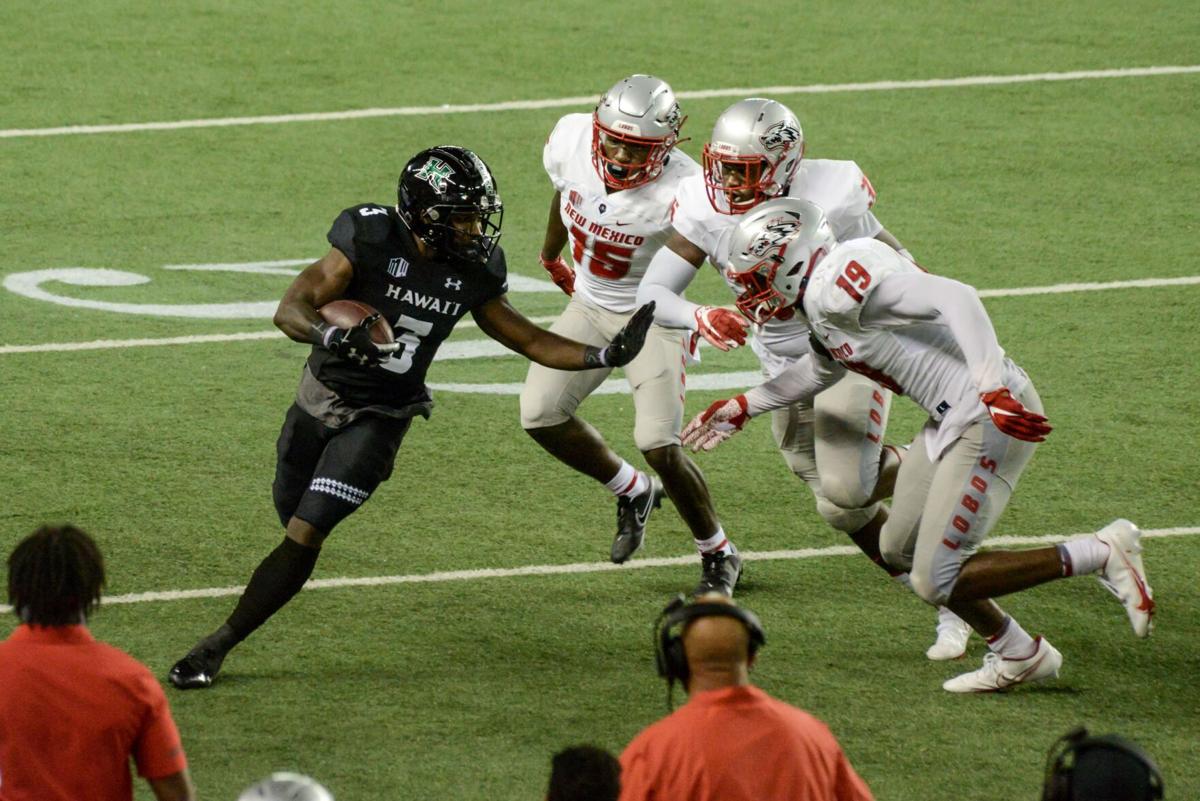 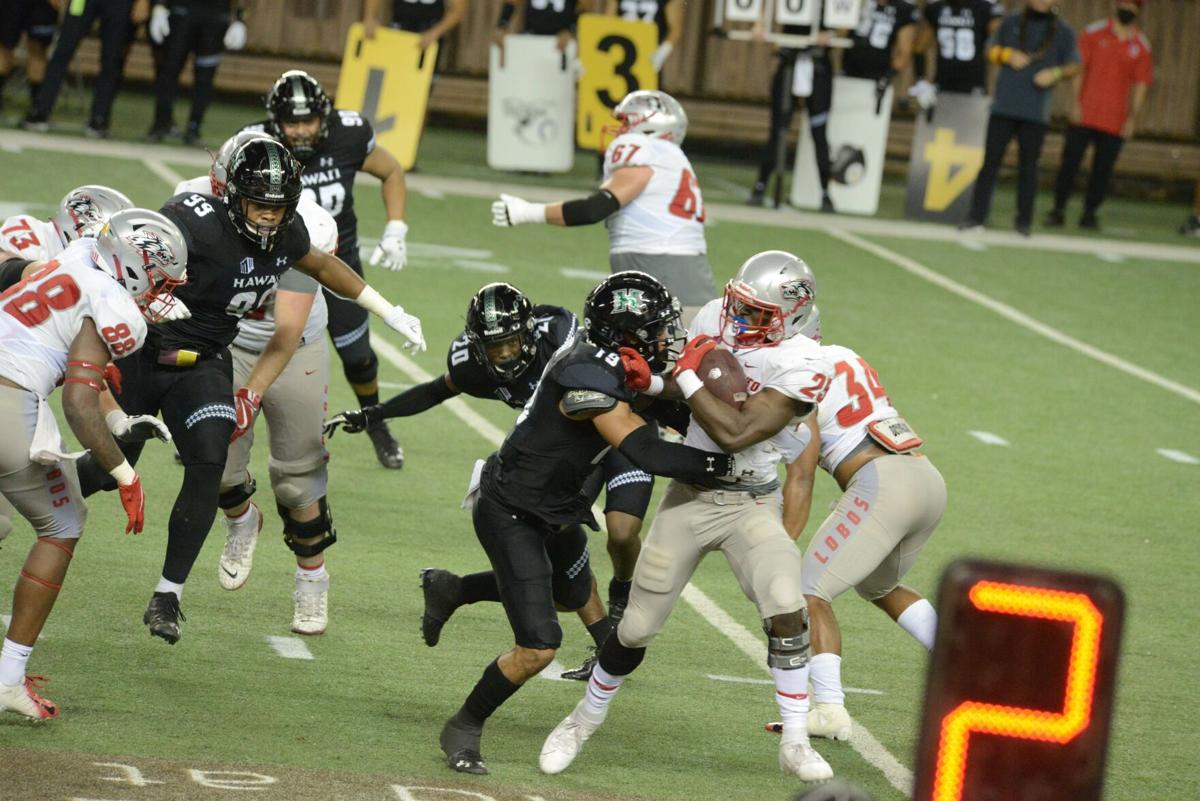 Defensive back, #19 Quentin Frazier initiates a tackle against New Mexico running back, #25 Nathaniel Jones during the Rainbow Warriors’ win over the Lobos at Aloha Stadium Saturday night. 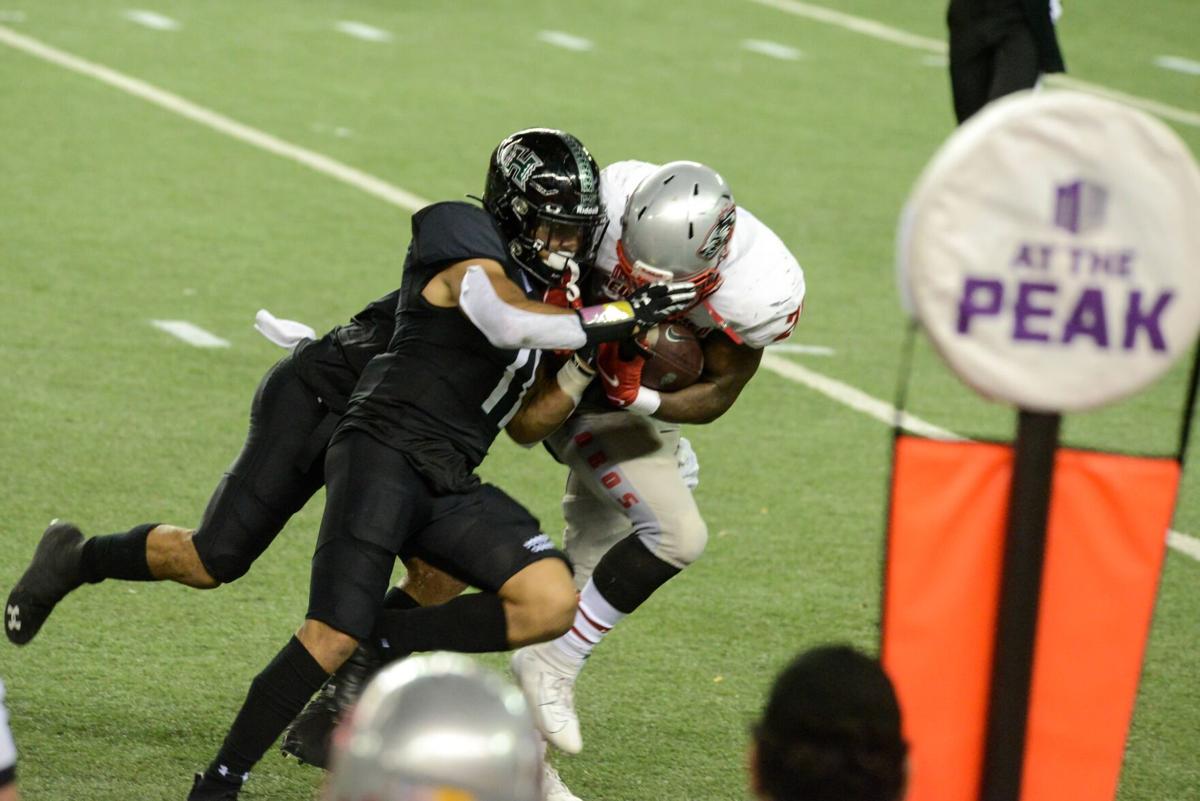 Defensive back, #11 Sterlin Ortiz and defensive back, #19 Quentin Frazier work together to tackle New Mexico's running back, #25 Nathaniel Jones during the Rainbow Warriors' win over the Lobos at Aloha Stadium Saturday night. 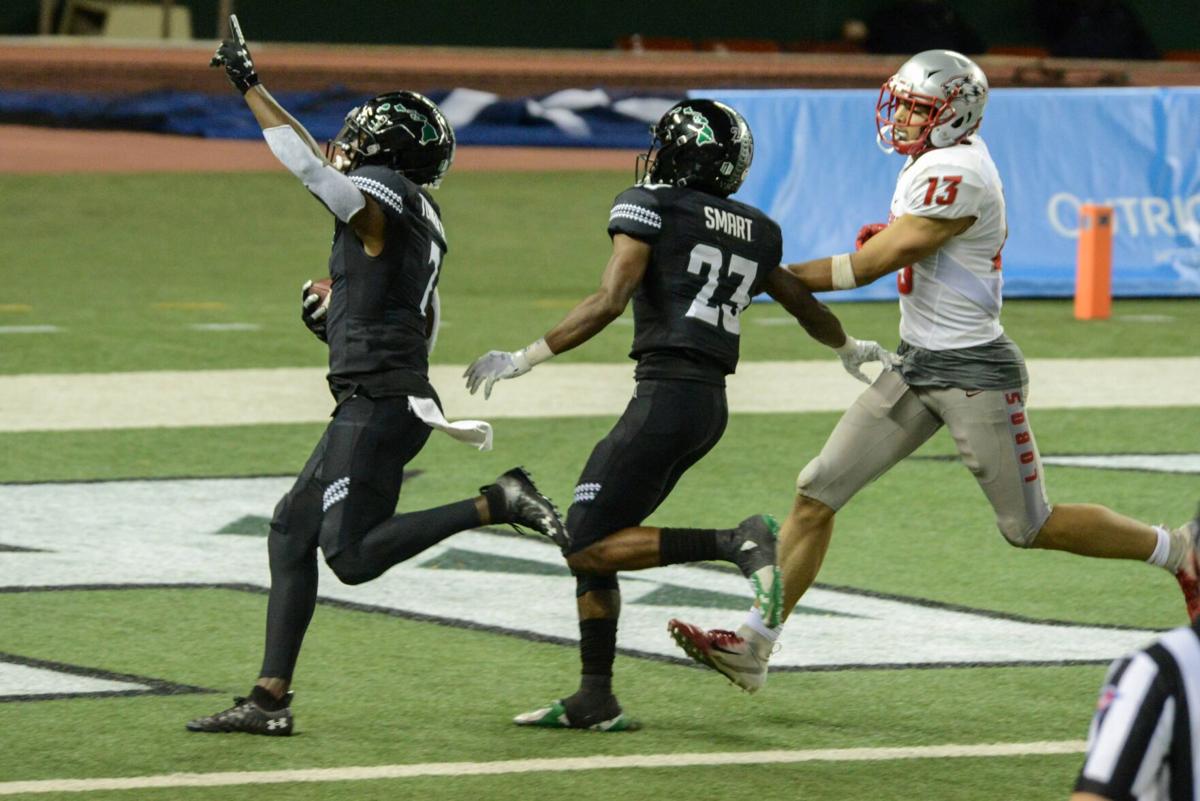 Running back, #7 Calvin Turner celebrates in the end zone after scoring the game winning touchdown in the Rainbow Warriors' win over the Lobos at Aloha Stadium Saturday night. 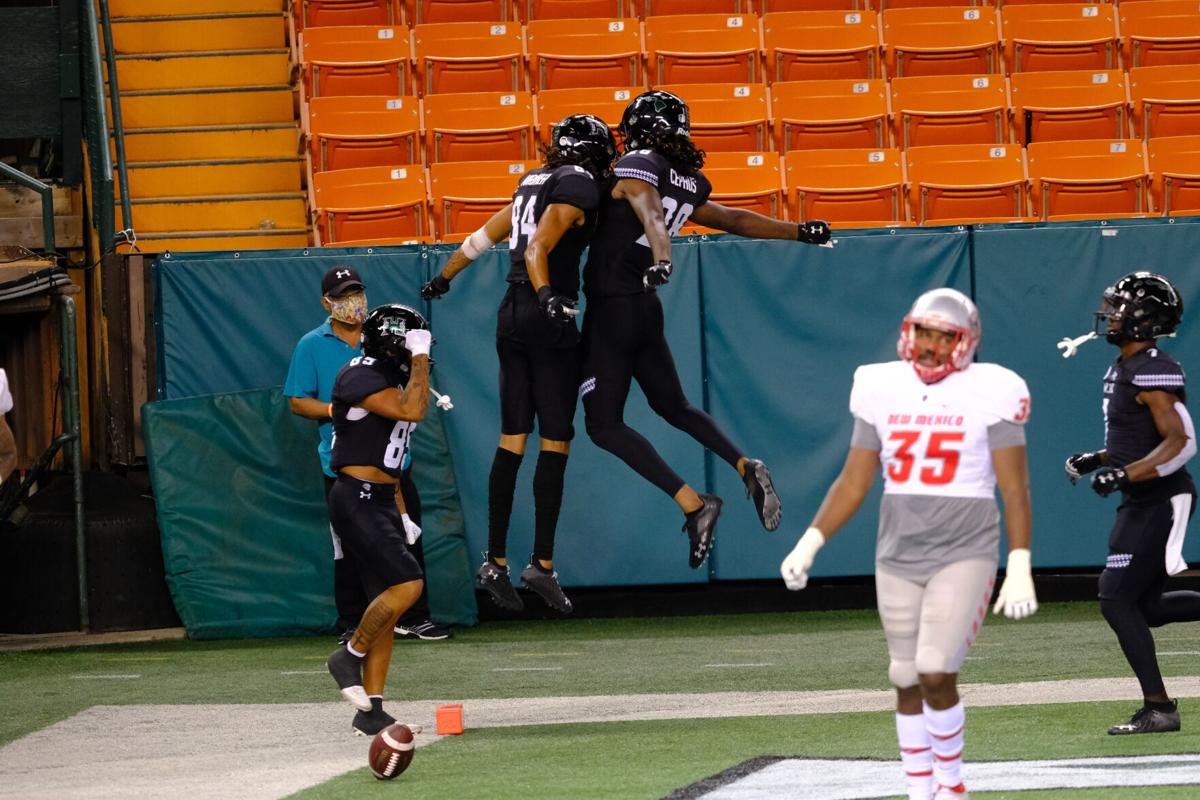 The Rainbow Warriors survived an offensive shootout Saturday night, as they prevailed over the New Mexico Lobos 39-33. In another game where the ‘Bows got off to a slow start, the offense finally helped the defense out in the second half and started scoring some points to get the win.

“It was a hectic night,” Head Coach Todd Graham said. “It was a great team effort … really proud of our guys. It was ugly, we obviously didn’t play well in some areas, and played very well in others.”

After entering an offensive vacuum in Laramie last week, Chevan Cordeiro looked dialed in for the game as he had a career night. Cordeiro threw for career highs in completions (33), attempts (43), yards (410) and touchdowns (4). All four touchdowns from Cordeiro came off 40-plus yard throws, all of which were highlight worthy.

But with highs come lows, as Cordeiro also threw two interceptions. One was a missed offsides call where Cordiero thought he had a free play, the other was in the endzone seconds before the first half ended.

“It was probably the first time I’ve gotten on [Cordeiro] hard,” Graham said. “I just wanted him to learn that those decisions out there, we don’t need you to [throw that ball].”

While he criticized his quarterback for the one interception, Coach Graham has zero doubts in Cordeiro’s ability to lead his team to these wins. As Cordeiro now a 6-1 record starting for the ‘Bows, watching a career game from him Saturday night stirred excitement for other offensive players.

Nick Mardner, a sophomore out of Canada, had his own career game with six receptions, 142 yards and a 42-yard touchdown where he broke the ankles of a Lobos defender.

“I was redshirted my first year, got to play a little bit last year, it feels good to get my feet wet and make an impact,” Mardner said. “I’ve seen all the guys since I’ve been here, Jojo Ward, Cedric Byrd, Jason Sharsh, all these guys were out here making plays, and I’ve been waiting for my turn. I’m blessed to be in the position to finally do so.”

Zion Bowens caught his first touchdown (42 yards) as a Rainbow Warrior, then struck like deja vu and got another touchdown (40 yards) about a minute later. Lastly Calvin Turner, the transfer from Jacksonville State, caught a pass and juked through multiple defenders for the 62-yard catch and run touchdown for the lead late in the game.

In what was the highlight of these last two weeks, the Hawaiʻi defense got off to a rocky start, allowing 20 points in the first half starting with a quick 3-play scoring drive to start the game.

Much of the blame on defense according to Todd Graham goes to himself. “I didn’t do a very good job … I made some bad calls that made us play from behind … We were just trying to do too much.”

Eventually, the defense made their adjustments and only allowed 13 points in the second half, stopping the Lobos offense enough times for Hawaiʻi to get momentum on the other side of the ball.

The star of the defense though was transfer Quentin Frazier. Frazier, who transfered from Azusa Pacific, became the second player in the Graham Era to break the stone in the locker room after Cordiero did it in the first game of the eason. Frazier came out like a torpedo alongside sophomore Darius Muasau, as the two ravaged the Lobos for 19 total tackles, with Frazier collecting an interception and 2.5 tackles for loss.

Overall, we’re starting to see what team the Rainbow Warriors are. The offensive identity wants to pass it down the field, then break off a big run when they least expect it. But if the offensive line cannot limit pressure, as we saw in the first half, the team cannot function. As the game went on, pressure was limited allowing Hawaii to score 35 points in the second half.

The defense, like Graham said, has its issues. But if the defense keeps playing disciplined then the defense becomes the star of the show for the Rainbow Warriors. Graham said he got too cute this week in his defensive preparations, and hopefully as the team travels to face San Diego next Saturday, he can perfect the base defense for the offense to take advantage of their momentum on the field.

Next week the ‘Bows travel to San Diego to take on the SDSU Aztecs. You can catch the game at 11 a.m HST on Spectrum PPV.