You have permission to edit this article.
Edit
HOME
BASKETBALL
FOOTBALL
TENNIS
VOLLEYBALL
WATER POLO
OTHER SPORTS
1 of 7 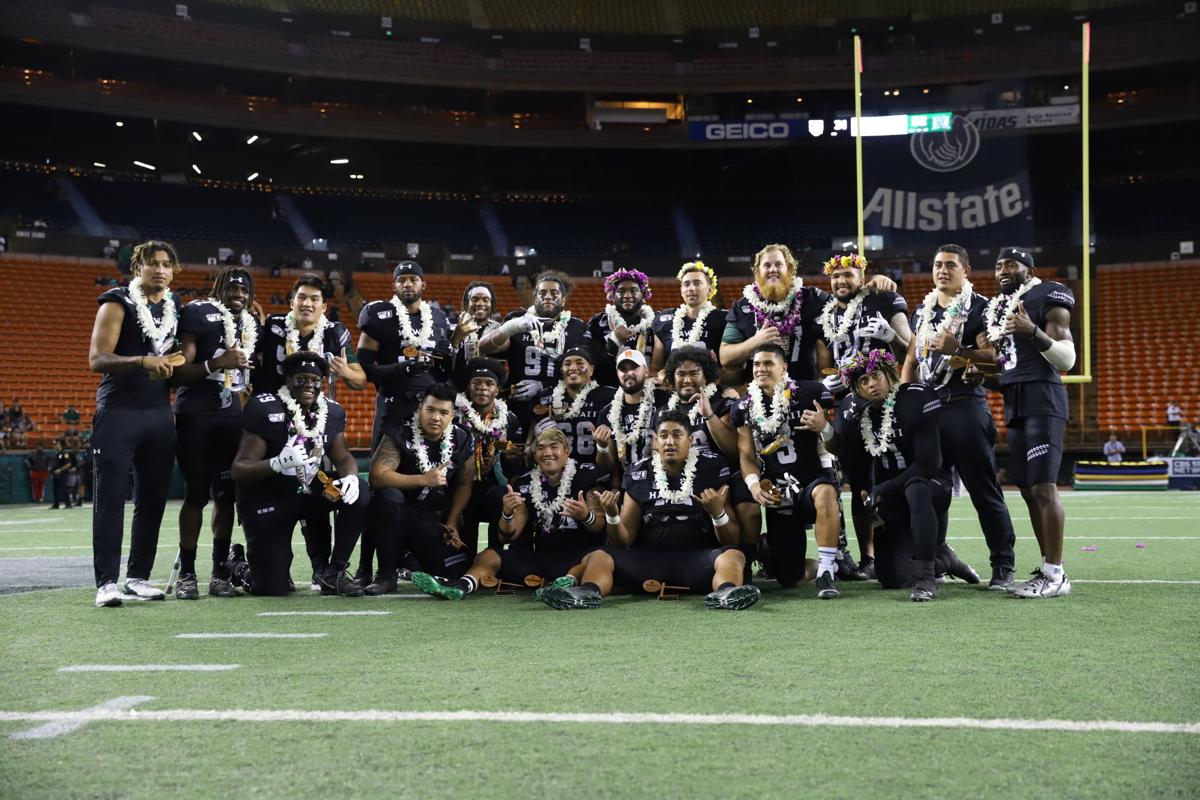 A total of 23 seniors were honored in the annual “Senior Walk” ceremony after the conclusion of the Rainbow Warriors’ game against Army. 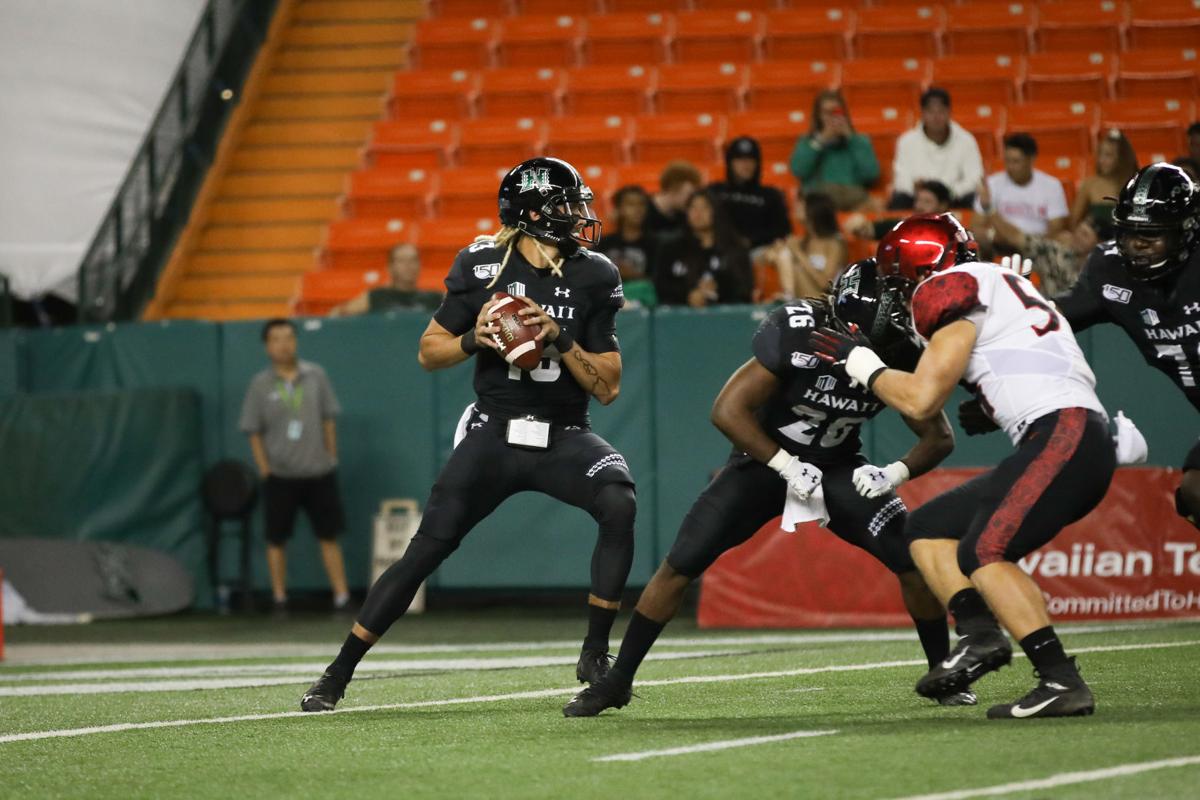 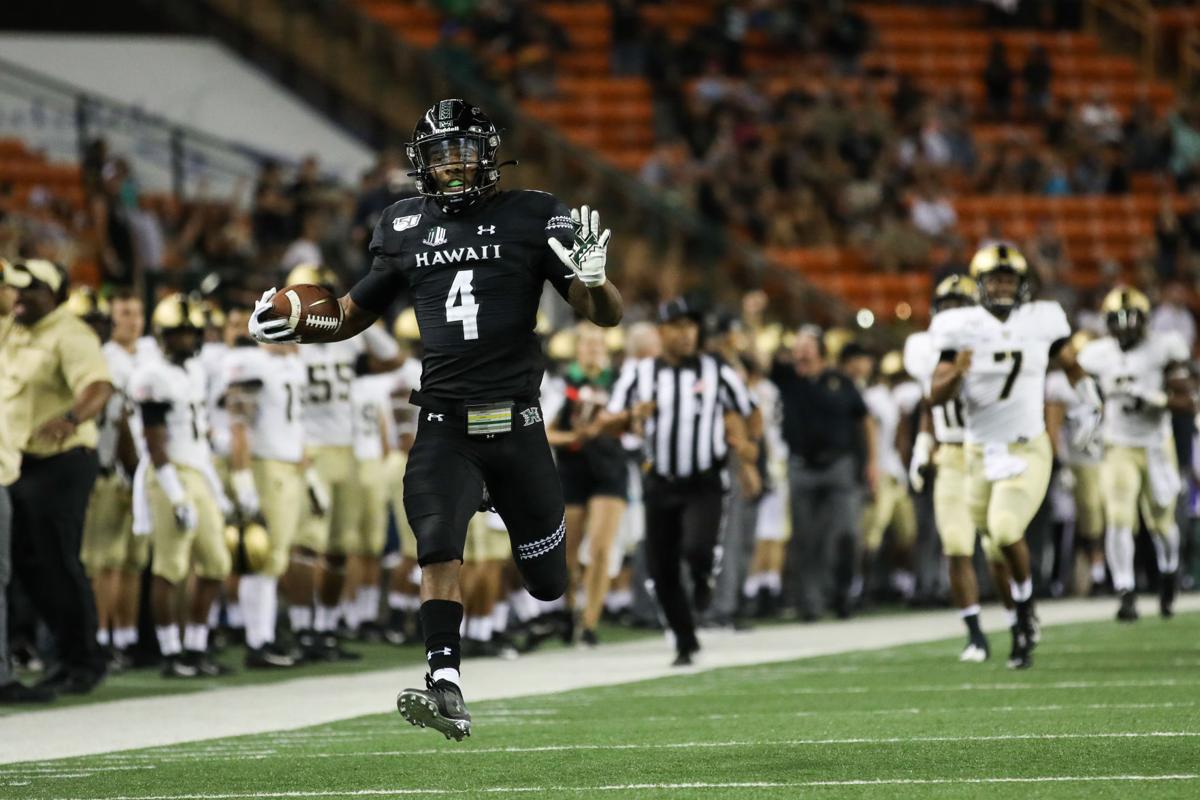 Redshirt senior defensive back Rojesterman Farris II hauls in a school-record 100-yard interception return against Army to put the ‘Bows up 52-31 with 1:34 left in the game. 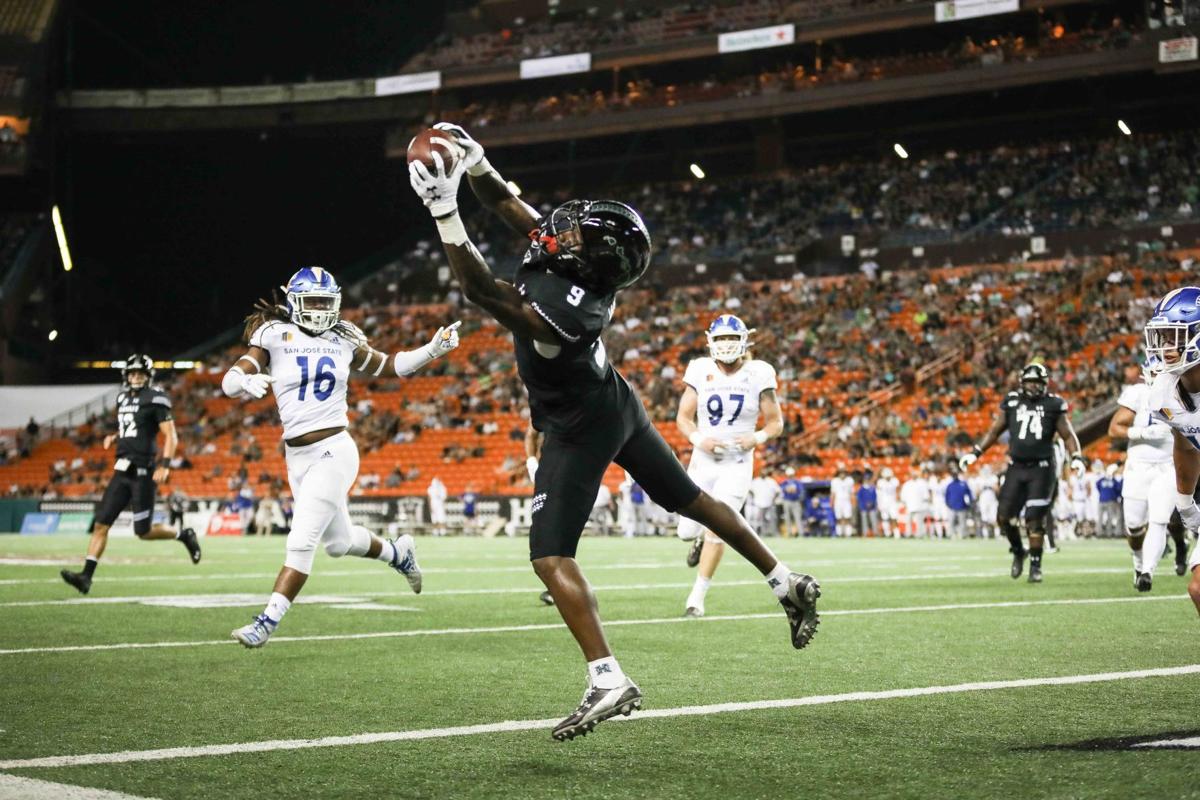 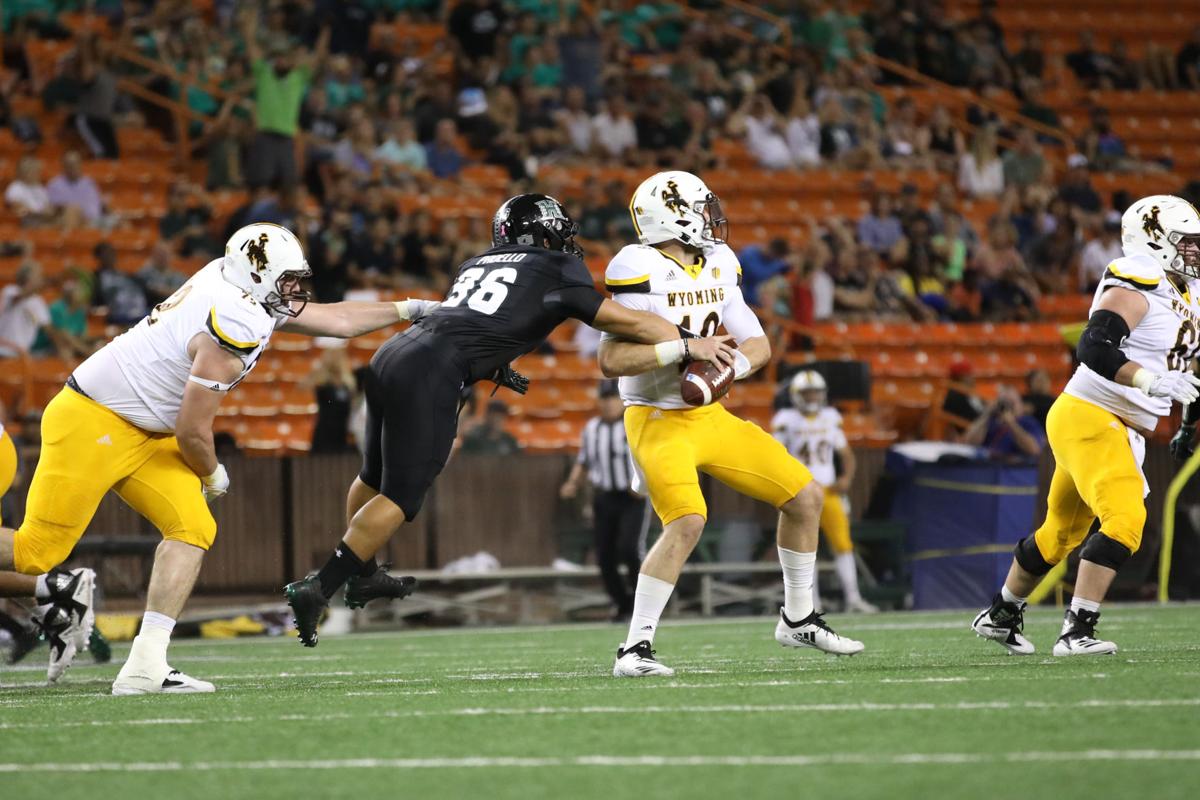 Rainbow Warrior junior defensive lineman Kaimana Padello sacks Wyoming redshirt freshman quarterback Tyler Vander Waal for a loss of 23 yards to the WY 9 as he fumbles the ball in the second quarter. 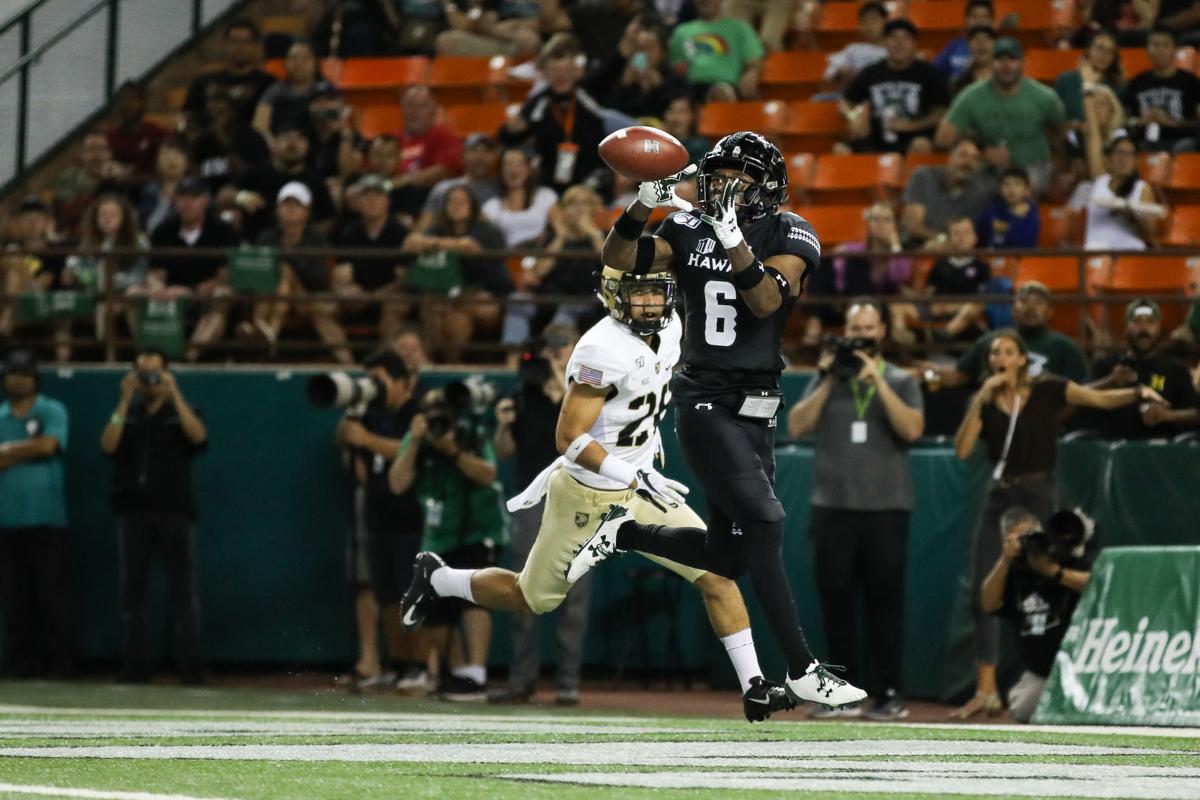 UH senior wide receiver Cedric Byrd II catches a 25 yard pass and brings it in for a touchdown in the second quarter against Army. Byrd eclipsed 1,000 yards for the season after posting eight catches for 122 yards and the touchdown. 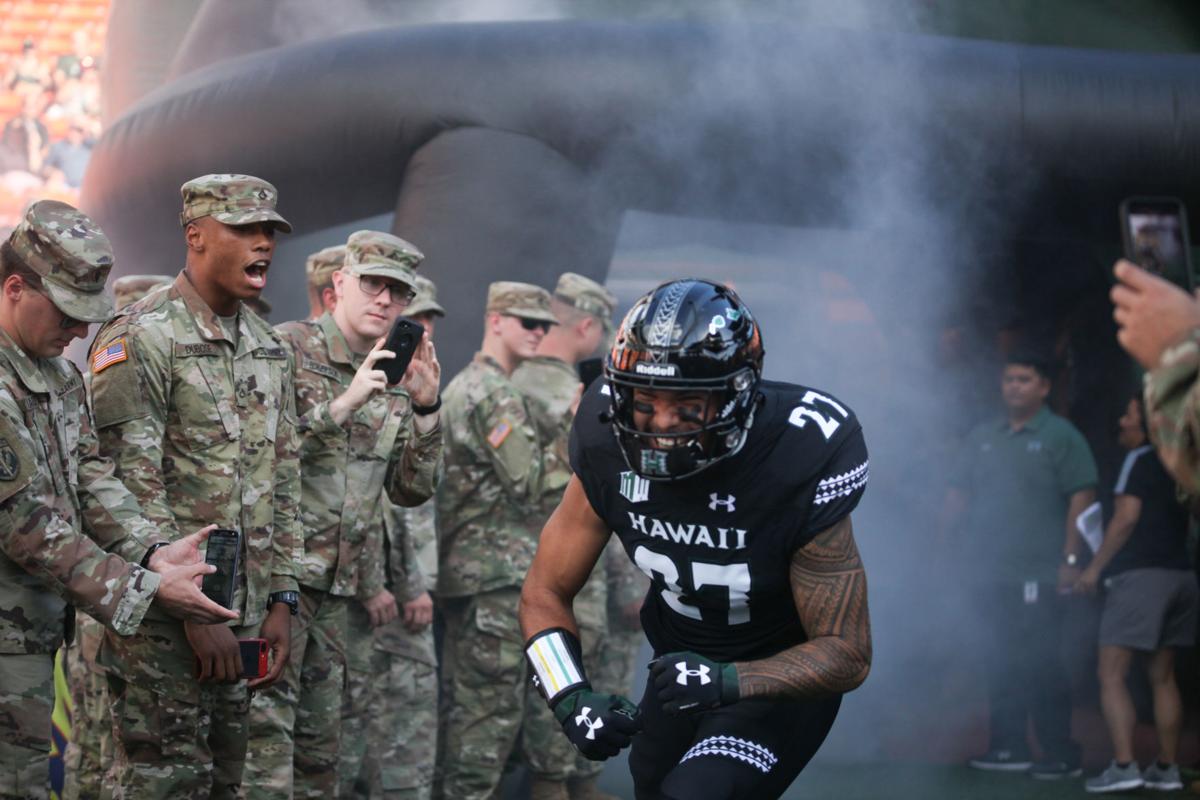 Junior linebacker Solomon Matautia runs out of the tunnel and onto the field for the University of Hawai'i football home opener versus Navy.

17 former Hawaiʻi football players will have to put their talents on hold as the coronavirus pandemic prompted another postponement for the NFL Draft hopefuls.

This week, the former Rainbow Warriors would have worked out individually and in groups for NFL scouts at UCLA’s campus. However, due to California’s recent shelter-in-place order and Hawaiʻi’s own growing cases, most won’t be getting another chance to work out for an NFL team before the draft in April.

Among the 17 were NFL Draft hopefuls Cole McDonald and Rojesterman Farris II.

As a redshirt junior, McDonald racked up promising numbers as the starting quarterback for UH over the last two years, finishing fourth in the school’s total passing yards (8,032) and passing touchdowns (70). While participating in last month’s NFL combine, McDonald found himself atop many of the workouts in the QB group, being first in the 40-yard dash and vertical jump, third in the three-cone drill and fourth in the broad jump.

In the four years he played as a defensive back, Farris proved to be one of Hawaiʻi’s most consistent starters. The Coral Springs native started 44 of 53 games in his career and snatched four interceptions along the way. Farris was named the team’s Coach Bob Wagner Defensive MVP of the ’19 season and participated in the NFL Collegiate Bowl and the newly revived Hula Bowl.

Other players drawing interest from NFL scouts were the dynamic duos at wide receiver and on defense: JoJo Ward and Cedric Byrd, and Solomon Matautia and Kaimana Padello.

Ward capped off his two years at Hawaiʻi with 1,999 receiving yards and 20 touchdowns and being named second team all-Mountain West last season. Ward generated most of his stats as a Rainbow Warrior this year with his breakout performance against Oregon State, where he had 189 yards and brought down four touchdowns to beat the Beavers.

Byrd finished his career as a Rainbow Warrior with 2,067 yards and 19 touchdowns and was named first team all-Mountain West last season. Byrd soared during his two Week 0 games as a ‘Bow, generating 405 yards in the two season openers.

Matautia and Padello were both four-year lettermen with the ‘Bows, starting off their careers with Norm Chow at helm. Both seniors were able to watch the team cultivate from a bottom of the pack team to winning 10 games this year and beating BYU in an absolute thriller in the Hawaii Bowl.

Padello racked up 13.5 sacks and 25 tackles for loss in his career and was honorable mention all-Mountain West this year. Matautia started 42 of 53 career games and generated 280 career tackles and five interceptions, of which two were brought back for touchdowns.

Below is a list of highlighted players from the UH pro day:

Four-year letterman…started 25 of 49 career games…career totals of 97 tackles, including 9.0 for loss and four sacks…started all 14 games during his junior season.

Fun Fact: Signed Letter of Intent with Fresno State in 2014 but took the year off and enrolled at UH in summer 2015.

Two-year letterman…appeared in 24 career games at both running back and safety…scored a touchdown after recovering a blocked punt at Nevada...team's primary kick returner in 2018, averaging 21.5 yards per return…39 combined career kick and punt returns with averages of 20.6 and 8.1 yards per return, respectively.

Two-year letterman…first-team all-Mountain West in 2019…ranked No. 3 in the conference and 19th nationally in receptions per game (6.5)…his 10 touchdowns ranked No. 2 in the MW and 25th nationally…finished the year with 1,097 receiving yards…his 98 receptions is the sixth-highest in program history…two-time MW Player of the Week (Sept. 2 & 9)…in his two-year career, tallied 177 receptions for 2,067 yards and 19 touchdowns.

Fun Fact: Thrived in two career Week 0 games – 181 yards versus Colorado State in 2018 (the most receiving yards by a UH player in his debut) and 224 yards versus Arizona in 2019 (2nd-highest total in a season-opener).

Four-year letterman…two-time honorable mention all-Mountain West…started 44 of 53 career games…returned his lone interception of the season for 100 yards and a touchdown against Army…finished the year with 54 tackles and 10 pass breakups…participated in the NFLPA Collegiate Bowl and was invited to the Hula Bowl…career totals of 171 tackles, 32 passes defended and four interceptions…

Four-year letterman…team captain…participated in the Hula Bowl…appeared in 35 career games…senior season was derailed by injury suffered in the second game and was forced to miss the next nine games…in 2018, rushed for 459 yards on 93 carries and two touchdowns and caught 10 passes for 89 yards and another score…started his career as a linebacker before switching to the offensive side of the ball.

Fun Fact: Competed in judo, wrestling and kickboxing throughout his youth and finished with a 70-4 career high school judo record, including a state championship as a senior at Mililani High in 2014.

Four-year letterman…stared 31 of 43 career games, including 25 straight over his junior and senior seasons…senior season was cut short due to injury after making 11 straight starts at left guard…received the team's Tom Kaulukukui Offensive Captain award during his junior season…two-time academic all-Mountain West.

Fun Fact: Older brother Ty was a first round draft pick by the New York Yankees and father Mike played in the St. Louis Cardinals organization.

Four-year letterman…started 24 of 36 career games at safety…string of 21 consecutive starts came to an end during senior season…had a team-leading 42 tackles and four pass breakups before suffering season-ending injury against Air Force…finished fifth on the team with 76 total tackles in 2018…two-time academic all-Mountain West…career totals of 138 tackles, one interception, and eight passes defended.

Fun Fact: Joined UH as a preferred walk-on out of Las Vegas' Bishop Gorman High School and earned a scholarship after his sophomore season.

Two-year letterman…appeared in 28 career games with 12 starts during his senior season…finished his senior season with 21 tackles, one forced fumble, and one pass breakup…tallied 61 career tackles (36 solo)…selected as the team's Most Valuable Player in the 2018 SoFi Hawai'i Bowl after recording an interception and fumble recover against Louisiana Tech.

Fun Fact: Began his collegiate career at Toledo before moving on to two different junior colleges and finally signing with UH in 2018.

Four-year letterman…started 42 of 53 career games…all-Mountain West honorable mention in 2019…finished second on the team with 81 tackles…led the team in tackles as a junior with 92 tackles, including 54 solo…tallied 280 career tackles and five interceptions…named the team's Dave Holmes Most Improved Player in 2017…participated in the Hula Bowl…scored three career defensive touchdowns, two off interceptions and one off a fumble recovery…three-time Mountain West all-academic.

Three-year letterman…team captain…named second-team all-Mountain West in 2019…ranked in the Top 10 nationally in several categories including passing yards (4,135; 4th), total offense (322.7; 6th), points responsible for (242; 7th), and passing touchdowns (33; 8th), all of which topped the Mountain West…also led the conference in passing efficiency (147.6)…named the team's Coach June Jones Offensive MVP and was a finalist for the Johnny Unitas Golden Arm Award…became just the fourth UH quarterback to throw for more than 4,000-yards in a season…named Most Valuable Player of the SoFi Hawai'i Bowl after throwing for a career-high 493 yards and four touchdowns...over his career, threw for 8,032 yards and 70 touchdowns and rushed for 880 yards and 12 scores.

Fun Fact: For most of his UH career, sported dreadlocks in honor of former Warrior quarterback Bryant Moniz, whom he trained with. Despite his blond locks, he is one-eighth Filipino.

Fun Fact: Played two years of collegiate soccer at Lewis & Clark C.C. and was a member of Australia's U19 soccer team.

Four-year letterman…appeared in 51 career games with 21 starts…tied for the team lead with three interceptions in 2019…also tallied 56 tackles and seven pass breakups…participated in the Hula Bowl…tied for second on the team with 87 tackles in 2018…posted career totals of 158 tackles, three interceptions, and three forced fumbles.

Fun Fact: Of Nigerian descent and first name means "my strength is in my God"…older brother Obim played football and basketball at Baylor.

Four-year letterman…team captain…honorable mention all-Mountain West…started 10 games before suffering season-ending injury against San Jose State…appeared in 50 career games with 17 starts…invited to the Hula Bowl but did not play…earned second-team all-Mountain West honors in 2018 after leading the team in sacks (7.5) and tackles-for-loss (11.5)…received the team's Coach Otto Klum Defensive Captain award in 2019 and Ben Yee Most Inspirational Player award in 2018…career totals of 13.5 sacks and 25 tackles-for-loss.

Fun Fact: Joined the team as a preferred walk-on out of O'ahu's Mililani High School and was twice the team's nomination for the Burlsworth Trophy, given to the nation's top player, who started his career as a walk-on.

Fun Fact: Joined the team as a walk-on in 2017 after two seasons at Graceland University and earned a scholarship prior to his senior season.

Four-year letterman…four-time academic all-Mountain West…appeared in 45 career games primarily on special teams including the last two as punter…took over as the team's starting punter midway through his senior season and averaged 44.1 yards on 20 punts…seven of his punts landed inside the 20 and five went for 50+ yards…averaged 41.6 yards on 30 career punts.

Two-year letterman…team captain…earned the team's Coach Tom Kaulukukui Offensive Scout award…tied for second on the team with 87 receptions for 913 yards and five touchdowns…started 14 of 15 games…career-high 10 receptions versus San Diego State and 123 yards at Nevada…participated in the Hula Bowl…played in 26 career games with career totals of 96 receptions for 1,065 yards and six touchdowns.

Two-year letterman…named second-team all-Mountain West…topped the conference in receiving touchdowns (11)…led the team and ranked second in the MW with 1,134 receiving yards…averaged 75.6 receiving yards per game, which ranked fourth in the Mountain West…team-leading 15 catches of 29+ yards…breakout game versus Oregon State with career-highs of 10 catches for 189 yards and four touchdowns…participated in the Hula Bowl…six career 100-yard receiving games and two game-winning touchdown catches…career totals of 116 receptions for 1,999 yards and 20 touchdowns.