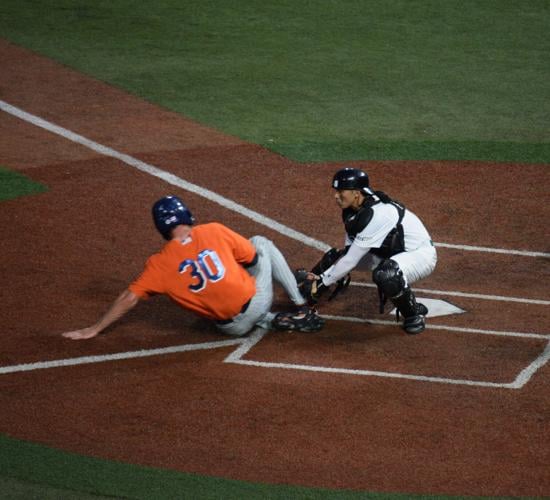 DallasJ Duarte (white) applies the tag to Cal State Fullerton's Jason Brandow (30) at home plate during the University of Hawai'i's 7-0 loss on Apr. 29. 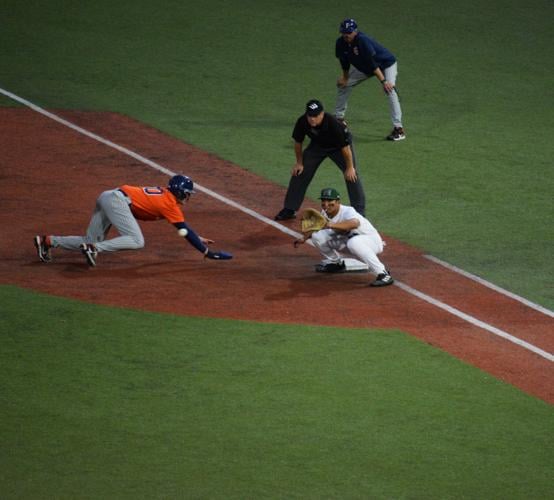 Jacob Igawa (white) catches a pickoff attempt during the University of Hawai'i's 7-0 loss to Cal State Fullerton on Apr. 29.

DallasJ Duarte (white) applies the tag to Cal State Fullerton's Jason Brandow (30) at home plate during the University of Hawai'i's 7-0 loss on Apr. 29.

Jacob Igawa (white) catches a pickoff attempt during the University of Hawai'i's 7-0 loss to Cal State Fullerton on Apr. 29.

HONOLULU — As the rain poured down on Les Murakami Stadium in the second inning, Cal State Fullerton also poured some runs on, scoring three off Hawai‘i starter Cade Halemanu en route to a 7-0 win Friday night.

“Weather’s never an excuse,” Halemanu said. “I just wasn’t on my game tonight.”

Halemanu pitched into the sixth inning, but was pulled after allowing the first two Fullerton batters to reach base and falling behind to the third batter on a 3-0 count. By the time the book closed on him, he was charged with all six Fullerton runs (five earned) and the loss.

“I really liked Cade’s ‘baller’ mentality tonight,” Hawai‘i coach Rich Hill said. “He didn’t have his best stuff and maybe a year or two ago, he would’ve caved in and started blaming, but he stuck his chest out.”

Despite the six walks and seven hits given up by the Hawai‘i starter, the Rainbow Warriors’ struggles on the field overshadowed Halemanu’s performance.

At the 7th inning stretch, 'Bows are down 7-0. Miscues have bitten them along the way, defensively and on the bases.#HawaiiBSB pic.twitter.com/2630Z3kvvP

“We just didn’t play good defense for him,” Hill said. “We weren’t ready to play and that’s my fault.”

While there was only one official fielding error, the Hawai‘i defense fell asleep at times and allowed a few Fullerton runs to score. There were a number of miscues on the basepaths, including some that led to both Jordan Donahue and DallasJ Duarte getting pulled out of the game.

Cal State Fullerton’s starter Tyler Stultz went seven innings and earned his fourth win of the season after striking out five Rainbow Warriors and not allowing a hit.

First pitch tomorrow is scheduled for 6:35 p.m. HT. Spectrum Sports will have the telecast and ESPN Honolulu will have the radio broadcast.

Blaze Koali‘i Pontes (Hawai‘i) and Evan Yates (Cal State Fullerton) are the projected starters. The program will have a ceremony before the game to commemorate the recently added signage in right-center field with Derek Tatsuno, Les Murakami, and the 1980 team that made the College World Series in attendance.